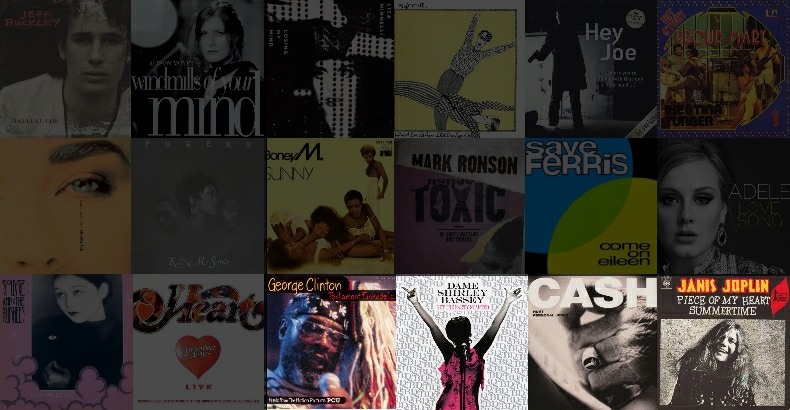 I’ve always maintained that any man who attempts to sing a Prince song, whether a drunk frat guy in a karaoke bar or a professional vocalist on stage, is a D-bag [Note: For my readers born pre-1970, a “d-bag” is just an “a-hole” reimagined for the 21st Century.]  Everything Prince performs is so imbued with Prince-ness that it’s just futile to even attempt covering.  And I’m not talking about the ladies, here (because that’s a whole other article for a whole other time); rather, I’m talking about all the men.  That means you, Sisco (for futzing up “The Beautiful Ones” when Dru Hill sang over Mariah Carey).  That means you, Foo Fighters (for a grungy “Darling Nikki” that was more shouting than singing).  And you, School of Fish (for a limp “Let’s Pretend We’re Married”).  It even means you, Art of Noise and sex-god Tom Jones (for a herky-jerky albeit novel “Kiss”).

Nobody likes singing a cover more than Dame Shirley Bassey.  I’d wager that 90% of her songs were originally written for somebody else.  And yet, when the individual cited in the Guinness Book of World’s Records as “Most Successful British Female Singer” is there—whether in front of an audience (or a camera), dressed like the world’s wealthiest drag queen, backed by the London Symphony Orchestra (or Propellerheads); or walking from her helicopter to the stage on a makeshift red-carpet, in the rain at the 2007 Glastonbury Festival (in a Julien MacDonald gown and customized Wellingtons, bedazzled with her monogram) singing to over 150,000 screaming fans—everything she sings is decidedly her own.

Picking but one of her incredible covers is a difficult exercise, indeed.  There’s her tear-jerking rendition of “If You Go Away” (translated from Jacques Brel’s “Ne Me Quitte Pas”).  There’s her emphatic take on The Beatles’ “Eleanor Rigby” (not to mention “Something” and “Hey Jude”).  Her take on psychedelia is also meritorious, what with The Doors’ “Light My Fire” and “Spinning Wheel” by Blood, Sweat, and Tears.  And her soaring (some might say over-dramatized) version of Foreigner’s “I Want to Know What Love Is” is fantastic for its sheer moxie.

But I think the capper on the whole thing came nearly fifteen years ago when she recorded a version of Pink’s “Get the Party Started” arranged as the theme to a Bond film, for the  UK department store Marks & Spencer's Holiday ad campaign.  It was so well received, that it got Shirley’s party restarted; and she’s since released two albums, one of all original songs (written especially for her, by the likes of Pet Shop Boys, Rufus Wainwright, KT Tunstall, and John Berry) marking her first studio album in 30 years.

Meanwhile, why is nobody booking this living legend in Las Vegas?  Tick tock, people.  Tick tock!

The Man in Black’s cover of a decidedly dark song was made even more somber by the fact that it very well could have been autobiographical, that it was one of the last singles he released before his death, and that the way in which he emotes is enough to bring a tear to the eye of even the most jaded listener.  And that’s not taking Mark Romanek's brilliantly shot video into account.

Cash passed away a mere seven months after shooting the video.  Cash’s version of Reznor’s song was voted “Single of the Year” in 2003, by the Country Music Association of America.  It was also rated #1 on CMT’s “100 Greatest Country Music Videos” (2004), “Top 40 Most Memorable Music Videos” on MuchMoreMusic’s Listed (2007), and “Top Singles of the 2000s” on Rate Your Music (2011).  According to Rolling Stone, Cash’s version ranked 15 on their “50 Best Songs of the Decade” (2009), while MySpace.com rated it the “fifth most influential song of all time.”  The song garnered Cash the Grammy in 2004 for Best Short Form Music Video (beating out videos by Madonna, Coldplay, Martina McBride, and Outkast). Word is that when Trent Reznor was first approached [by producer Rick Rubin] he thought the idea of Johnny Cash covering his song might rub people as gimmicky (although he was flattered).  His skepticism vanished, however, upon seeing Romanek’s video.

If (for whatever reason) you’re wanting to get your cry on and are looking for the perfect mood-music to bring out those tears, just dial this number up, on you iTunes, put it on repeat, and you’ll be good to go.  Just make sure you’ve locked-up the Seconal and the razor blades.

You know a cover is good when entire generations of listeners think it’s the original.  Granted, one can’t expect either the Fame or Glee generations to be intimate with jazz standards written for Broadway, in the ‘30s; but the version of "Summertime"—from George Gershwin's 1935 opera Porgy and Bess, with a libretto by DuBose Heyward and lyrics by Ira Gershwin—best known to anyone born in the post-‘50s era is not that by Billie Holiday, nor that by Louis Armstrong.  Not the rendition by Ella Fitzgerald, nor those by Sam Cooke, Billy Stewart, Jill Scott and George Benson, The Zombies, or even that by Miles Davis.  Why not?  Because, Janis Joplin, that's why not.

And while it became one of her signature songs as a solo artist in the two years leading up to her too-soon death, it never sounded better (to me anyhow) than when she was singing as the lead vocalist of Big Brother and the Holding Company.

A member of the 27 Club—those musicians who tragically died at the age of 27, originally Joplin, Brian Jones, Jimi Hendrix, and Jim Morrison (who all died between July 3rd, 1969 and the same day in 1971), then, later, Kurt Cobain, and more recently, Amy Winehouse—she was the “Queen of Rock and Roll” and rated #28 on Rolling Stone’s “100 Greatest Singers of All Time” (2008), as well as #3 on Vh1’s Greatest Women of Rock and Roll (1999) placing behind only Aretha Franklin and Tina Turner.

There’s just something about that voice (some might call it more of a wail, others still a keening cry) that let you know Janis was pulling everything she had, from deep within her, and sending it out to her listeners.  It was as though she had to free herself from the demons that tormented her, and the only way she knew to do so, was through singing.

As a result, we are left to wonder what musical wonders might have come.  But we do not need to wonder at all about the magnificence of the music she left us.  And this song, as sung by that shy girl from Texas—who was so influenced by the music of Jazz great Bessie Smith (aka the 'Empress of the Blues') that in 1970 she paid to erect a gravestone at Smith's unmarked grave—is a perfect example of how Janis Joplin became one of the great conduits between the Blues and rock n’ roll.