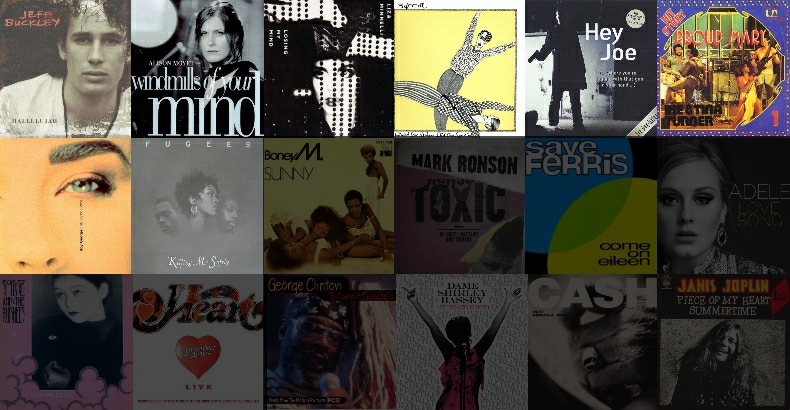 They say that there’s an audience for everything, but I think that’s just a polite way of saying that you’ve gotta wade through a ton of crap to find the good stuff.  And when something is good, everyone wants to jump on that train and ride it to riches.  Sadly, this doesn’t always work.  But, when it does—usually by throwing an original twist on an already proven premise—well, that’s gold, Baby!

This holds especially true for the cover version of a previously recorded song.  Frankly, it's gotta take a certain amount of nerve simply to record a cover, as presumably, artists only do this with songs by artists they like or admire.

The following are numbers 18 through 11, of my favorite covers (and their videos).  And while there are any number of covers that I’ve no doubt forgotten or overlooked; it’s a pretty good list, with something for everyone.

Buckley took John Cale’s version of Leonard Cohen’s classic, and (after smoothing out the gravelly edges) introduced it to a new generation; which is really what a great cover should accomplish—otherwise, why bother?  Sadly, it wasn’t until after Buckley’s tragic accidental drowning at the age of 30 that anyone really took notice.  Then, of course, they came in droves.  Rolling Stone rated the song as one of “The 500 Greatest Songs of All Time” in 2004, and it shot past RIAA Platinum status in 2008.

I can still remember where I was when I first heard Alison Moyet.  I was at summer camp, and a girl named Jennifer Ginsberg had a boom box and was playing Yaz’s seminal synth album, Upstairs at Eric’s.  In the decades since then, Moyet has remained one of the most powerful vocalists around, and her take on Michel Legrand’s twisty collaboration with Marilyn and Alan Bergman—from the original version of The Thomas Crown Affair—doesn’t disappoint.  Meanwhile, if you’re curious about that eerie high-pitched music emanating from her backing orchestra, it’s a woman “playing” water glasses (á la Sandra Bullock in Miss Congeniality).

In Stephen Sondheim’s Broadway musical, Follies, “Losing My Mind” is a torch-song, sung by a former showgirl who has become obsessed with her perfect man.  Nearly two decades later, Pet Shop Boys opted to use the song as the first single from Results, the album they’d produced for Liza Minnelli.  And while the irony of Minnelli singing a song that was sung by a character named ‘Sally’ was lost on no one, the enjoyment Liza feels while singing is purely contagious.

This one’s a twofer.  Have you ever heard of Gloria Jones?  Turns out she was the girlfriend of T.Rex visionary Marc Bolan, mother of his son, and was driving the car that crashed and killed him.  Sad, right?  Oh yeah – she was a pretty good singer, too.  Unfortunately, her song “Tainted Love” did nothing on the charts.  Then, after hearing it in a club more than a decade later, UK duo Soft Cell got a hold of it, and after replacing the band with synthesizers and drum machines, released a very different version, in the early ‘80s.  On the single’s extended 12” single, it was recorded as a medley with The Supremes’ “Where Did Our Love Go” (the Motown group’s first single to reach number one on the Billboard Hot 100 chart).  When blended together, with the synth-pop sound for which Soft Cell became known, one of the most enduring hits of the ‘80s was born.

Although credit for this song goes to Billy Roberts who wrote it nearly sixty years ago, it was Jimi Hendrix who put it on the map.  And while such diverse artists as The Byrds, Deep Purple, Wilson Pickett, Nick Cave, Patti Smith (for whom the song was her first single), Soft Cell, Seal, Eddie Murphy, The Who, and Frank Zappa and The Mothers of Invention have all given the song their own spin, it’s this reggae version by Black Uhuru that really does it for me.  Irie!

A prime example of the Southern, bayou-influenced, “swamp-rock” for which his band is known (despite hailing from Berkeley, CA), John Fogerty wrote “Proud Mary” after his discharge from the National Guard.  Actually, it was a mélange of multiple songs he wrote at that time.  But in the hands of Ike Turner, it was rearranged into a sexy, sultry vehicle for his wife, Tina, and their backing singers/dancers, The Ikettes.  The Ike & Tina Turner version received the Grammy, in 1972, for Best R&B Vocal Performance by a Group.

Actually, I didn’t know this was a cover until I heard Boy George talking about the process of recording this song with Pet Shop Boys on VH1 Storytellers.  Nor did I know that Jimmy Page, then a studio session guitarist, played rhythm guitar on Dave Berry's original recording (obviously pre-Led Zeppelin).  Where the original is mildly psychedelic and twinkly, the remake is smooth and syrupy.  Bravo, Boy!

Lori Lieberman is perhaps best known for the music she provided for Schoolhouse Rock in the late ‘70s/early ‘80s.  What she is not known for, is the enduring treasure known as “Killing Me Softly with His Song”—that distinction belongs to Roberta Flack; along with the trio of Grammys it earned her, in 1973 (Song of the Year, Record of the Year, and Best Pop Vocal Performance by a Female Performer).  A couple of decades later, it was reworked by Fugees, a trio that climbed to the top of the charts with this single, winning the Grammy for Best R&B Performance by a Duo or Group.  With its easy-breezy mix of reggae, soul, and hip hop, Fugees produced a song that was at once a throwback to a more innocent time and an intelligent look at the future of music.