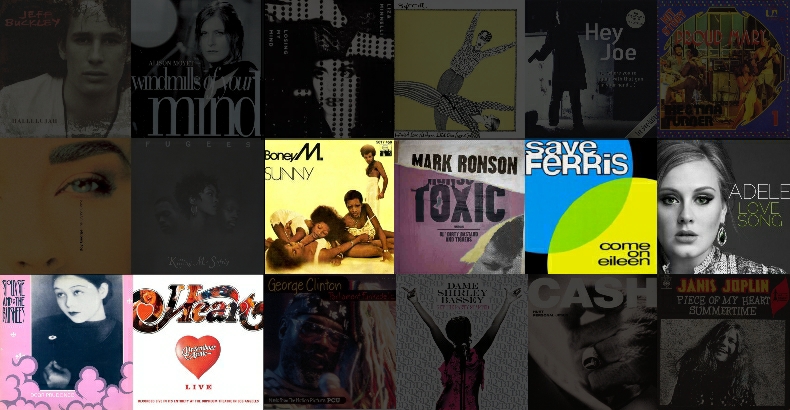 One of the most covered songs in popular music (Cher, Dusty Springfield, Robert Mitchum, Stevie Wonder, Ella Fitzgerald, Marvin Gaye, Jamiroquai, Mina, Nick Cave, Leonard Nimoy, Frank Sinatra with Duke Ellington, Mark Ronson with Candie Payne, etc.), this upbeat single was written by Bobby Hebb on the same day that JFK was assassinated and Hebb’s older brother was killed in a knife fight.  On a major bummer, Hebb wrote the song to express how much he preferred to “think of happier times.”

A decade later, a German producer named Frank Farian put together a quartet of Caribbean singers and dancers to appear as the faces of a studio band he’d dubbed Boney M.  This was commonplace in the disco era (I'm looking at you, Silver Connection), but got Farian into trouble in the ‘80s with those most (in)famous of lip synch-ers, Milli Vanilli.  Anyhoo, Boney M. was HUGE in Europe, known for their highly stylized live performances (where the “public” Boney M. sang, albeit with a number of back-up singers).  Regardless of who sang what, this version is an immensely popular version with DJs as it mixes into all sorts of formats with ease and is particularly danceable.

Up until a decade ago, “Toxic” was pretty much the only Britney song for which I particularly cared.  A little bit of trivia for ya: It was originally written for and offered to Kylie Minogue, but she wasn’t having it, so they gave it to BritBrit.  She turned it out and won her first Grammy as a result.  Then, a nice Jewish boy named Mark Ronson turned it into a stanky bit of hip-hopping funk.  Along with singer/songwriter Tiggers (best known for his work with Jeff Buckley) and a verse by that late great rapper, Dirt McGirt (aka Wu-Tang Clan founding member, Ol’ Dirty Bastard), Ronson’s engineering and guitar-play takes a pop song and morphs it into something else, entirely.  Word!

When I think of the ‘80s, and specifically one-hit wonders of the ‘80s, one of the first songs that comes racing to mind is “Come on Eileen” by the peculiarly named Dexys Midnight Runners.  It featured a fiddle, all of these tempo and key changes, and a video with a bunch of folks dancing in the street, wearing dungarees and sleeveless shirts.  I still love it, to this day.  So, I was delighted, in the late '90s, when I first heard that it had been covered by an at-that-time new band, Save Ferris.  Much like a little outfit known as No Doubt, Save Ferris was an Orange County-based ska band fronted by a fierce girl.  They’d taken this song that was a musical genre in and of itself, and reworked it into a smile-inducing bouncy three-and-a-half minutes of sunshine-y SoCal post-punk ska/pop.  As the song says, “Toora Loora Toora Loo-Rye-Aye!”

When I think of the Cure (and as one of my all-time favorite bands, I think about their music, a lot) especially their ballads, I think of the slightly psychedelic, six-string arrangements and the oftentimes maudlin vibe.  One thing I most definitely never think of in conjunction with the Cure is bassa nova—the Brazillian musical genre that fuses samba and jazz, and was all the rage in the 1950s and '60s—which is exactly the style in which soulful songstress Adele and producer Rick Rubin chose for Adele's cover of "Lovesong" that appeared on her album, 21 (2011); an album that not only received the Grammy for Album of the Year, in 2012, but also went on to become the best-selling album of the 21st Century (by a margin of millions).

Alternately stylized as "Love Song," the single from the Cure's album, Disintegration (1989), became the band's only song to crack the Top 10 of the Billboard 100; and was originally penned by Robert Smith as a wedding present to his then-fiancee, Mary, whom he'd married in 1988.  In a bit of It's a Small World minutia, Adele's mother (a big fan of the Cure) had brought 3-year-old Adele with her (for her very first concert!) to see the Cure, who were then on tour, promoting the Disintegration album.  As Adele told an interviewer in Variety, in 2011, "I said, 'Oh mum, I've covered "Lovesong," it's a bossa nova version' and she was mortified. Then I played it for her and she loved it and she cried, but the (initial) thought of someone ruining a Cure song fills her with despair. She'd disown me if she didn't like it, but she loved it."  I do, too; but the real takeaway from all of this is how much I'd really like to hang out and listen to music with Adele's mom!!

When I was growing up, no music was more sacrosanct in our house than that recorded by those four boys from Liverpool.  My mother was a devout follower of the gospels according to John, Paul, George, and Ringo; and we were raised accordingly.  Like Texas, you just didn’t mess with The Beatles.  But while I was cavorting in the Connecticut woods, in my early teens, I was turned on to new worlds of aural delight.  Justin introduced me to punk.  Craig got me into metal.  And  Tony initiated me into the fabulous world of what is now referred to as “alternative” (although, at the time, I think it was “goth” and “new wave”).  Enter the High Priestess of post-punk glamour, Siouxsie Sioux, with her spiky black hair, kabuki-style make-up, and that voice.  Oh, that voice!

So, take a song that’s almost childlike in its lyrics, entreating a reclusive friend (Mia Farrow's sister, Prudence, with whom Lennon and Harrison were partnered on a meditation course, in India) to come out and enjoy the sunshine.  “The sun is up.  The sky is blue.  It’s beautiful, and so are you.”  Now, keep the brilliant elements of The Beatles at their Maharishi Mahesh Yogi-inspired best, but add in that ultimate New Wave pairing of Robert Smith (of The Cure) on guitar and Siouxsie on vocals, and you’ve got a song (selected by Lennon as one of his favorite Beatles songs) that reaches toward the divine.

I loves me my classic rock.  When you consider that I spent a considerable part of my childhood in Seattle, it was only natural that I’d develop a love for Heart.  That's one rockin' pair of sisters!  Now, I’ve known for a long time that, in addition to their own catalogue of incredible hits, they performed some of the best covers out there (their “Stairway to Heaven” is second only to the original).  But it wasn’t until I went to see them perform live, at the Las Vegas Hilton [now Westgate Las Vegas], in 2010, that I heard the Wilson sisters chew-up The Who’s redemptive rock aria “Love, Reign o’er Me” – and lemme tell ya, I fell out.

And just when I thought that it was one of those in-concert rarities, Heart went and released Dreamboat Annie Live—with live performances of all the songs from their first album (that would be the aforementioned Dreamboat Annie in the title), plus a bunch of bonus covers, including songs by John Lennon and Pink Floyd, a couple by Led Zeppelin, and this song.  Even if you’re not particularly into rock, give it a try.  If Nancy Wilson’s licks on her 12-string aren’t enough for you, then Ann Wilson’s legendary vocals should be just the thing to send you over.