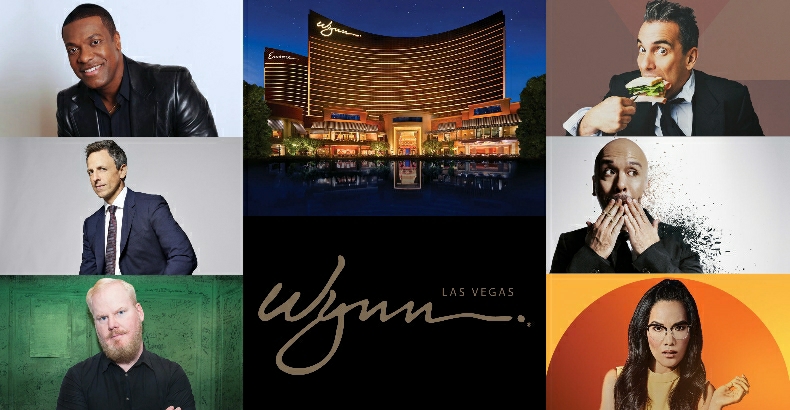 The comedy stylings of Chris Tucker, Seth Meyers, Jim Gaffigan, Sebastian Maniscalco, Jo Koy, and Ali Wong have been gathered by AEG Presents Las Vegas to appear in the lovely Encore Theater at Wynn Las Vegas, this spring and summer.  Check it out!

Whether evidenced by his breakout appearances on HBO’s Def Comedy Jam, or his big-screen roles as ‘Smokey’ in Friday (1995), ‘Ruby Rhod’ in The Fifth Element (1997), or ‘Det. James Carter’ in the massively successful Rush Hour films (1998, 2001, and 2007); actor and comedian Chris Tucker knows how to make people laugh.  Now, back by popular demand, the star of the Netflix original, Chris Tucker – Live returns to Wynn Las Vegas for another one-night-only affair, with a pair of back-to-back performances, on Saturday, April 06.  Come watch this very funny man whose singular use of inflection and timbre have led to his films collectively grossing more than one billion dollars in worldwide box office receipts.

Award-winning writer, comedian, actor, and late-night television host, Seth Meyers, is making his Wynn Las Vegas debut on May 4, bringing his memorable comedy and topical humor to the Encore Theater stage.  Meyers began his career with Saturday Night Live in 2001 where he served as a cast member for 13 seasons and a head writer for nine seasons, during which he won a Peabody Award, as well as a Primetime Emmy. Named one of TIME Magazine’s "100 Most Influential People" (2014), Meyers' television work has garnered 20 Emmy nominations since 2007, and has gained him acclaim for his perfectly-timed wit and off-the-cuff satire; all of which has led to Meyers’ becoming a particularly sought-after host – a role in which he's delivered at such swanky affairs as the 90th White House Correspondent’s Dinner (2011), the 18th and 19th ESPY Awards (2010 and 2011), the 66th Primetime Emmy Awards (2014), and the 75th Golden Globe Awards (2018).

A dry and clever American standup comedian who’s hateful toward Hot Pockets and proudly pale, comedian, actor, writer, and producer, Jim Gaffigan will bring his international Quality Time tour to Wynn Las Vegas with two back-to-back performances on May 18.  With each of his last four stand-up albums nominated for a GRAMMY, Gaffigan’s observational humor pokes fun at food, laziness, and fatherhood, among other things; and have made him the most-played comedian on Pandora as of 2016 (with over 647 million spins). The winner of a Daytime Emmy, for his work as a commentator on CBS This Morning (2016), the critically-acclaimed performer continues his reign in the comedic world, repeatedly selling out venues across the U.S.  Be among the first to see Gaffigan performing material that won’t be seen by the rest of the world, until Amazon Prime Video airs Quality Time this fall, marking the streaming service’s first foray into stand-up comedy.

Dubbed “comedy’s new superstar” in a recent profile by NBC Nightly News with Lester Holt; comedian, actor, and best-selling author, Sebastian Maniscalco will make his Wynn Las Vegas debut with a two-night-only engagement at the Encore Theater on May 25 and 26. The winner of the prized “Stand-up Comedian of the Year” at 2016’s Just For Laughs comedy festival, in Montreal; Maniscalco will bring to the stage the observational humor that’s led People to call him “the comedian’s comedian;” and has earned him roles in the Academy Award-winning Green Book (2018), TAG (2018), Martin Scorsese’s upcoming film, The Irishman (2019), as well as a series of his own comedy specials culminating in the just-released Netflix original, Stay Hungry (2019).  Come see why at the Live Music Summit in Beverly Hills, last November, Maniscalco received Billboard's inaugural "Comedian of the Year" honors.

This summer, Jo Koy will bring his wildly popular Break The Mold tour to Wynn Las Vegas for three nights, from May 31 to June 02, where he will showcase his insightful humor and jokes inspired by his family (especially his mother and son).  After starting out in Las Vegas coffeehouses, Koy was given the opportunity of a lifetime, when, in 2005, he was invited to perform on The Tonight Show with Jay Leno, where he became one of the select few comics to receive a standing ovation. Since then, Koy has had two highly rated and successful comedy specials on Comedy Central, Don't Make Him Angry (2009) and Lights Out (2012); and appeared on 141 episodes of Chelsea Lately, between 2007 and 2014.  Koy released his 3rd stand-up special, the Netflix original Jo Koy: Live from Seattle (2017); and received the prestigious "Stand-up Comedian of the Year" award at 2018's Just For Laughs comedy festival in Montreal.

This Labor Day Weekend, comedian, actress, and writer, Ali Wong will make her Wynn Las Vegas debut with a two-night-only engagement of her Milk & Money tour, at the Encore Theater.  Wong received critical acclaim for her breakout Netflix special Baby Cobra (2016), followed by even more accolades for her follow-up, Hard Knock Wife (2018); while setting a record, in between, for being the very first artist to sell out eight shows at San Francisco’s Masonic Theater.  These days, Wong is executive producing the upcoming Netflix animated series, Tuca & Bertie, along with Tiffany Haddish (each lends her voice to one of the title characters); while starring in the feature film Always Be My Maybe, that she co-wrote with her longtime friend and creative collaborator, Randall Park. Wong’s debut book for Random House, featuring essays about her offstage life, will be released in 2019.

Get into it!
#Comedy