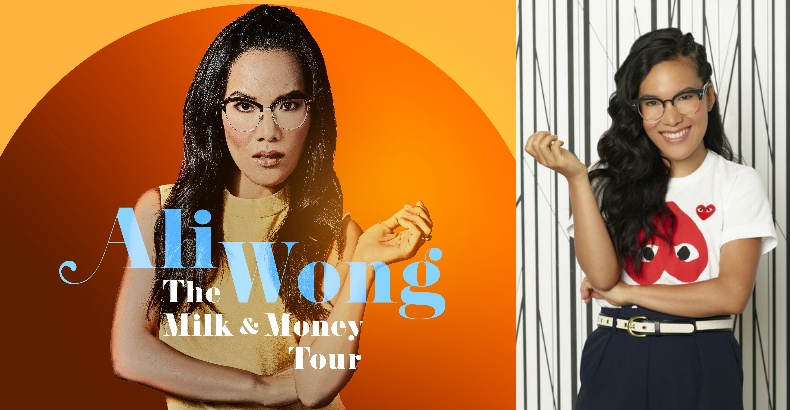 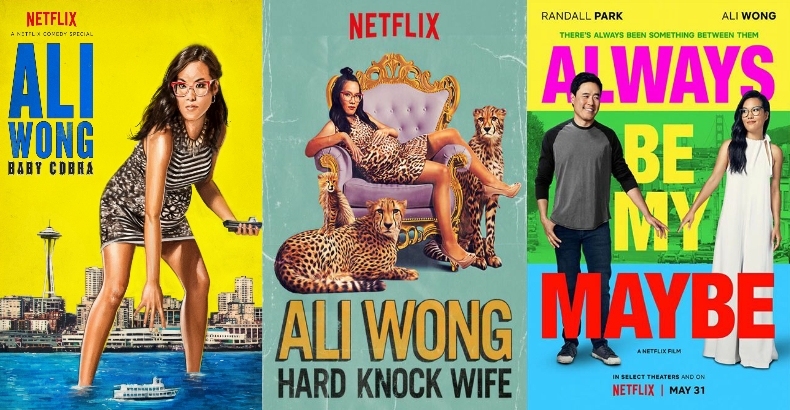 I think my earliest glimpses of Ali Wong’s comedy chops were first as a member of the ‘Round Table’ on Chelsea, Lately (2012), and later around 2014-2015 in a trio of sketches on Inside Amy Schumer (“I’m So Bad,” “Allergic to Nuts,” and “Babies & Bustiers”).  Around that time, I started watching a new sitcom that was loosely based on the life of chef Eddie Huang, about growing up in the early Nineties in Orlando, with his Taiwanese family.  As that nutjob who actually reads every credit, I noticed Wong’s name among the writers, somewhere around the middle of the first season, and upon Googling, confirmed it was the same Ali Wong.

But it wasn’t until American Housewife (2016) – the coy and clever ABC sitcom starring Katy Mixon as Katie Otto, “the second fattest housewife in Westport,” featuring Wong and Carly Hughes as Katie’s two best friends, Doris and Angela (respectively, a strict Asian-American mom married to a Jewish guy who we never see, and a hippy-dippy divorced lesbian mom), that I really got an idea of just how well rounded Wong’s talent is.  That she and Hughes are basically the Statler and Waldorf* of American Housewife, is a pretty brilliant conceit.

Earlier that year (on Mother’s Day, no less), Netflix had premiered Baby Cobra, Wong’s one-hour comedy special that had been filmed at Seattle’s Neptune Theater, the previous fall, when Wong had been seven months pregnant** with her first daughter.  The artwork for Baby Cobra – an homage to the poster for the 1958 cult sci-fi film, Attack of the 50 Foot Woman, featuring a giant Wong (wearing the short and stretchy dress that Wong had worn in her show to highlight her pregnancy) standing in Puget Sound (up to her ankles), palming a Washington State Ferry – had me laughing and clapping for Wong’s savvy, before I even watched it.  Her second Netflix special, Hard Knock Wife (filmed two years after Baby Cobra, at Toronto’s Winter Garden Theater, with Wong again seven months pregnant, this time with her second daughter) was also released by the streaming juggernaut, on Mother’s Day.

Ali Wong’s Milk & Money Tour, featuring a happily not-pregnant Wong, comes on the heels of the critically and commercially acclaimed Netflix feature, Always Be My Maybe, which starred Wong and longtime friend Randall Park, and which Wong and Park both wrote and produced (with others).  That the film served as the directorial debut of Nahnatchka Khan, who created and produces Fresh of the Boat (which stars Park and formerly employed Wong), means these three have a lot of experience working together, and it pays off for viewers, in the form of a delightful rom-com described by Wong as “our When Harry Met Sally.”

I can’t really go into the specifics of Wong’s set for a few reasons, chiefly among them that there was a strict embargo on recording devices (such that guests were given Neoprene pouches in which to place and secure their smartphones, that required a special magnetic doohickey to unlock).  Also, I was laughing far too hard to take notes.

Rest assured, if you are a fan of Wong’s no-holds-barred, no-cow-too-sacred, raunchy realness (she’s as likely to talk about pubic hair or pooping as she is about how she trapped her husband, and why “Fan pussy” is so much more of a reward for male comedians than “Fan dick” will ever be for female comedians), you are gonna have one hour of extreme side-splitting, tear-inducing laughter coming your way.

Meanwhile, if you’re hoping to wangle a ticket to any of the remaining shows on the Milk & Money Tour – that, in addition to her recent Las Vegas residency (that was brought by AEG Presents LV to the Encore Theater at Wynn Las Vegas), includes a residency at The Wiltern in Los Angeles (September 07 - October 06), a couple shows at The Met in Philadelphia (October 17), and concludes with a residency at the SF Masonic Auditorium in San Francisco (December 21-30) – I would strongly suggest that you get off your ass and do so, pronto; because the few tickets that remain ain’t gonna be available for long.

[Editor’s Notes: * A pair of characters from The Muppet Show, who first appeared in 1975; Statler and Waldorf are the two cantankerous elderly men, who heckle the cast, guests, and performances from their box on the balcony // ** While Wong is indubitably a trailblazer; in 1967, the late, great Joan Rivers performed stand-up during her third trimester, and on The Ed Sullivan Show, no less!]