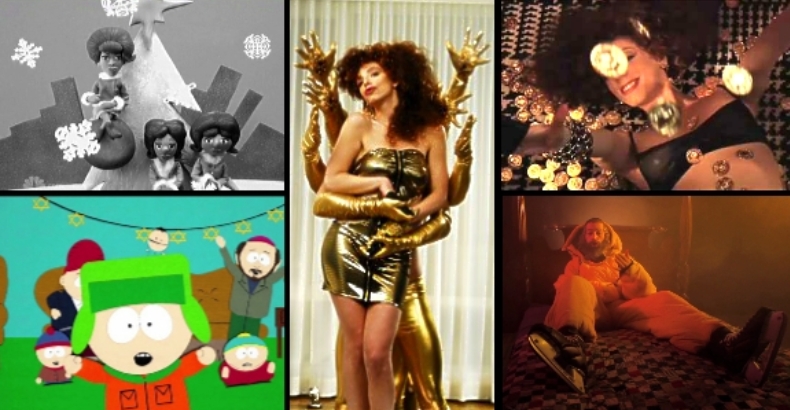 The Holidays are a hoot!  And nothing gets me into the spirit of the season like a song that not only makes me laugh (whether through satire, humor, or sheer nerve), but also has me bobbing my head, tapping my foot, and dancing along.  Here is a quartet of my favorite funny holiday songs that were written with one Hebraic foot firmly planted in the land of wit.

Chevonne—one-time backup singer for Lady Gaga, then a contestant on The Voice, and now the lead singer of Chevonne & the Fuzz—spins more than her dreidel in this slinky ditty about a nice Jewish girl who decides to get naughty with eight comely gentleman callers.  It brings to mind a cross between Mariah Carey and Teena Marie, by a modern girl; and is wrapped up in a very pretty package, to boot!

You’ve really gotta give it up for Matisyahu.  Not only did he write this jamming original ode to the Festival of Lights for the folks from Funny or Die, but (as a former Chassid) he did so with peyos and a beard, AND, in the video, he actually displays some killer breakdancing on ice skates!  I can’t do either, let alone both at once…  Frankly, the real miracle is that he didn’t break his neck.  Bonus: the song’s got a legitimately groovy beat.

When, in 1997, I first watched the “Mr. Hankey, the Christmas Poo” episode, on the first season of South Park, I remember being on the floor, at my friend Deb’s apartment, on the Upper West Side, gasping for air; a result of laughing so hard that I’d fallen off the couch.  And it was this song, featuring Matt Stone as the voice of young Jewish Kyle Broflovski, that sent me into the apoplectic fit that had delivered me there.  Cheers to Messrs Parker and Stone on their first musical episode, their first Christmas special, and the first episode in which Kenny didn’t die.

In 2005, the incredible Darlene Love—who sang with everyone from Elvis Presley and the Beach Boys to Sonny & Cher and The Ronettes, was inducted into the Rock & Roll Hall of Fame, in 2011, and was a subject of the 2013 Academy Award-winning documentary, 20 Feet from Stardom—voiced the lead in this hilarious cartoon by Robert Smigel, for the animated “TV Funhouse” segment of Saturday Night Live.  Love’s lush classic Motown-style vocals were the perfect accompaniment to the wicked lyrics and brilliant stop-motion Claymation antics.

Get into it!
#Holidays