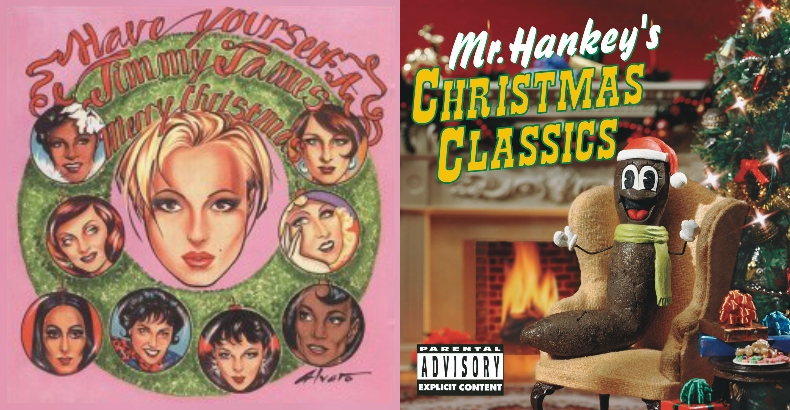 Following is a trio of particularly twisted Christmas carols that bring a twinkle to my eye and slap a smile on my mug.

A child of the seventies raised on rock n’ roll, it’s no wonder that I was delighted by “Merry Effin’ Christmas” by Miss Guy and Matt Katz-Bohen. When I first came back to New York (as a “grown-up”), the glory days of CBGB had long since faded, and Don Hills was where it was at; a place where you could rock out with your cock out (and many did). And few stars in the Don Hills universe of punk, rock, and glam shined as brightly as did Miss Guy, lead singer of the Toilet Boys (and one of the city’s most talented make-up artists). Both naughty and nice, Katz-Bohen (since 2008, the keyboardist for Blondie) and Guy take turns hamming things up, in the upbeat and decidedly satirical B.G. Kuchta-directed video. Less chestnuts roasting on an open fire than chests and nuts of a more flaming variety, it’s all in good glitter-rock fun.

On December 2nd, 1998 I went (as I did every Tuesday) to Beige, the weekly festival of fabulosity at Bowery Bar, hosted by Erich Conrad and Edwige. That week, however, I went to hear my friend, vocal impressionist Jimmy James, perform a truly left-of-center holiday show. Sitting at a table with my newly-minted pals, designers Kalinka and Stan Chopin (though we’d only been introduced just moments before, Klink and Stanny remain two of my dearest friends, to this day), I heard Jimmy sing the 1970 José Feliciano holiday classic “Feliz Navidad” à la Bette Davis, from his soon-to-be-released album, Have Yourself a Jimmy James Christmas. Suffice to say, the whole room fell out, laughing hysterically. A few years into the new millennium, I went to see the opening of Jimmy’s multimedia show at Helen’s (formerly Judy’s), and saw this seamlessly edited video, by James Papadopoulos, featuring clips from some of Bette’s biggest films, set perfectly to Jimmy singing. Take a gander, and soak in the Christmas spirit.

When I saw the first South Park Christmas episode, “Mr. Hankey the Christmas Poo” featuring the song “The Lonely Jew at Christmas,” I ended up on the floor, howling, clutching my side (but only after my jaw dropped, as though unhinged). Good times. I didn’t think they’d be able to top it. But Messrs. Parker and Stone were just getting started. And never was this more self-evident, than a couple of years later, in 1999, when they released Mr. Hankey’s Christmas Classics and its accompanying episode, with its double-barreled explosion of irreverent wrongness, “O Tannenbaum” by ‘Adolf Hitler’ followed immediately by “Christmas Time in Hell” by ‘Satan the Dark Lord’ and the damned. Tongue-in-cheek doesn’t begin to describe the level of moxie with which those two are filled. But I’ll defy anyone not to have busted at least a toothy smile, by the time Satan gives a shout-out to Michael Landon’s hair. In the words of Karen Walker, “It’s funny because it’s blasphemous.”

Get into it!
#Christmas