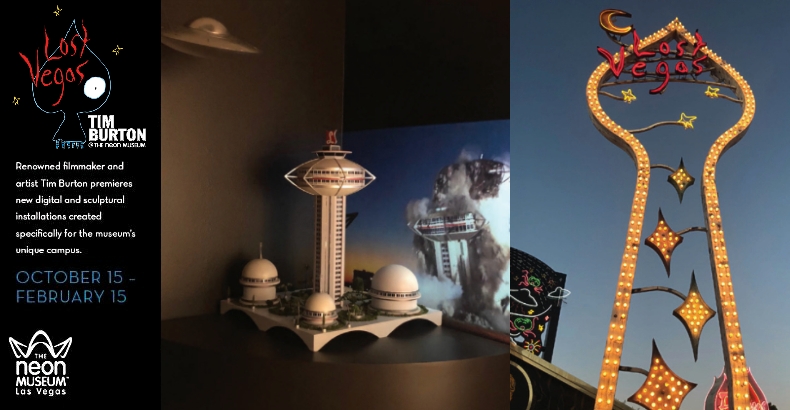 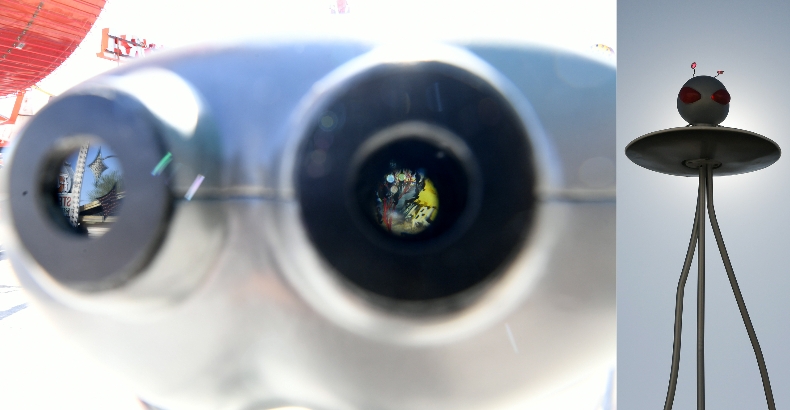 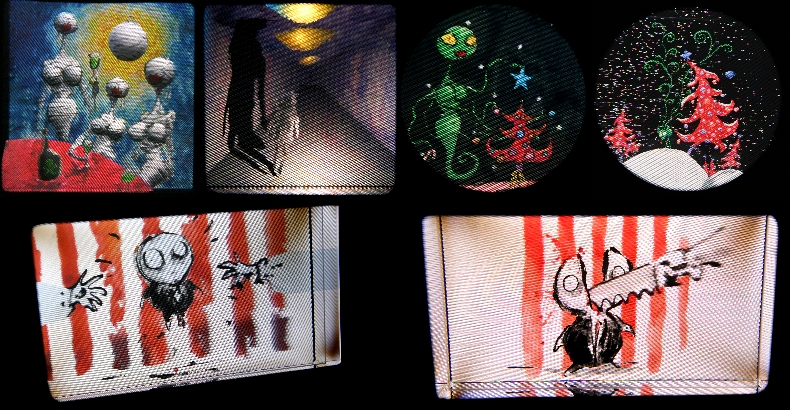 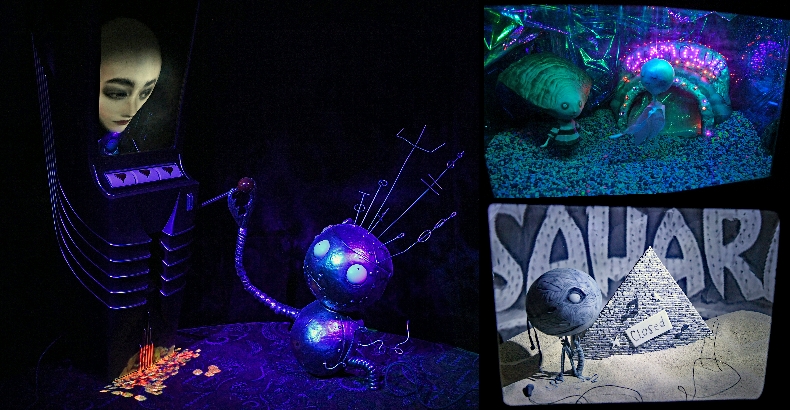 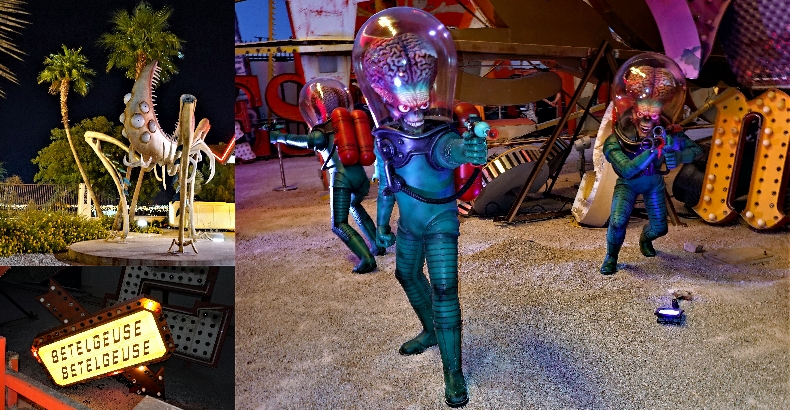 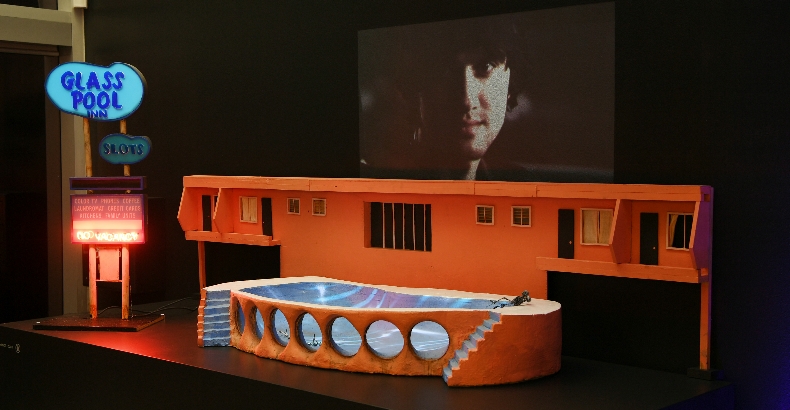 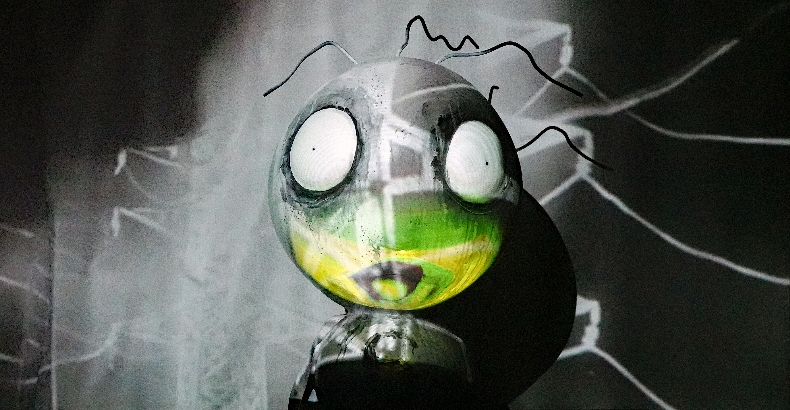 Upon arriving at The Neon Museum to view LOST VEGAS: Tim Burton @ The Neon Museum, I  entered the Engelstad Foundation-presented exhibit via the museum’s La Concha Entrance and found myself in the first of two Interior Exhibition Galleries.  It featuring the new sculptures Spiral Eyed Girl (2019) and Guns ‘N’ Booze (2019), while the second was comprised of the scale-models made by Burton of the Landmark Hotel & Casino (1995) and of the Glass Pool Inn (2006), that were respectively used for the Burton-directed motion picture Mars Attacks!, and for his music video for The Killers’ song, “Bones,” (the former accompanied by Space Saucer with Dents (1995/1996)).  Only steps into the exhibition, and it’s already made it’d already made its Vegas-related bones (if you’ll forgive the pun).

Stepping outside, I seemed to have gotten sidetracked and ended up making a beeline to Martians (2019) the trio of Burton’s little green men, arranged in attack formation, at the head of the Neon Boneyard.  From here, I veered to my right, and headed around the trail, stumbling across such works as Betelgeuse Sign (2019) and Boy with Nails in His Eyes (2017), as well as paired pieces like Stain Boy (2017), Penguin Boy (2017), and Bugs (2017) that were each accompanied by a verse of Burton’s poetry, sculpted in neon tubing.  It was a bit dusky at sundown, and I breezed right past two of the four observation-style viewfinders built for the custom View-Master reels that comprise Viewports (2019), but fortunately, Jerry Misko turned me around and sent me back with instruction as to where I would find them.  (Thanks, Jerry!)

Then it was into the Dome, a circular interior gallery built in the Boneyard (a literal pop-up, if you will), that featured some of my favorite Burton creations, including the works collectively known as Holographic Drawings and Paintings (2019), that featured Looking Glass displays attached to Intel NUC computers.  Gazing upwards, my eyes fell upon the Beetlejuice-inspired Carousel (2009), casting its color-saturated lights around the perimeter of the Dome, itself intentionally cast in velvety darkness.

I’m not quite sure how, but I got turned around, and I attempted to exit through the entrance.  Anyhow, I apologized to the doorman, and went the other way, to ensure that I’d find the exit.  This is when I came across the installation Robot Boy and Slot Machine (2019), which features a bald woman who I’m convinced was inspired by Sinéad O’Connor.  Anyhow, I went to leave (again) and found myself back at the Dome’s entrance, once more.  Oy vey!  So, back I went into the circular room, and used the opportunity to more closely examine Burton’s dioramas, Mummy Boy Karaoke (2019) and Oyster Boy and a Dancer Named Pearl (2019); before finally finding the exit, and emerging back in the Neon Boneyard, at the foot of the Lost Vegas Sign Tower (2019), as the aptly-named Neon Grid Wall (2019) beckoned from above – the last two works built (to Burton’s specifications) by Las Vegas-based Hartlauer Signs.

Whether you’re a fan of Tim Burton’s oeuvre, or simply enjoy seeing the ways in which Popular Culture can enhance Art and vice-versa, make it a point to check-out LOST VEGAS: Tim Burton @ The Neon Museum.  It's running through February 15, 2020.  And bring your kids: They’ll have a blast!