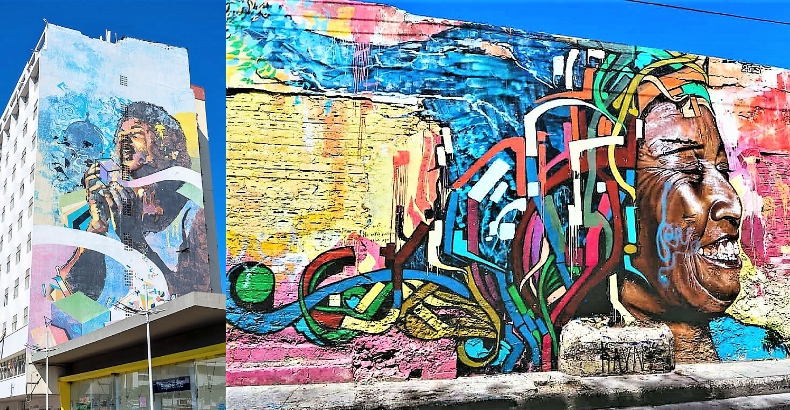 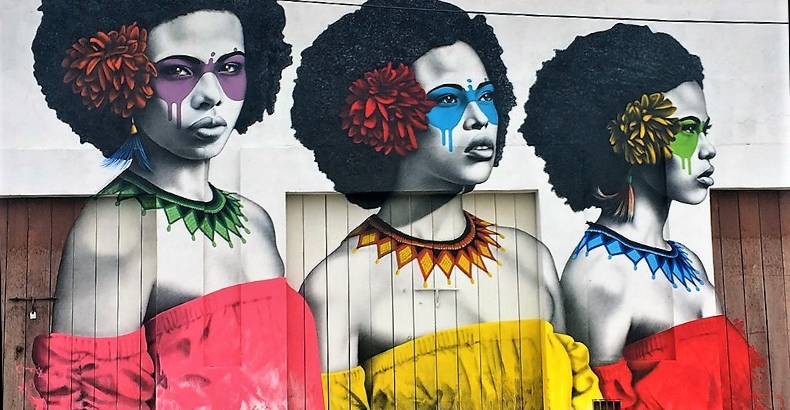 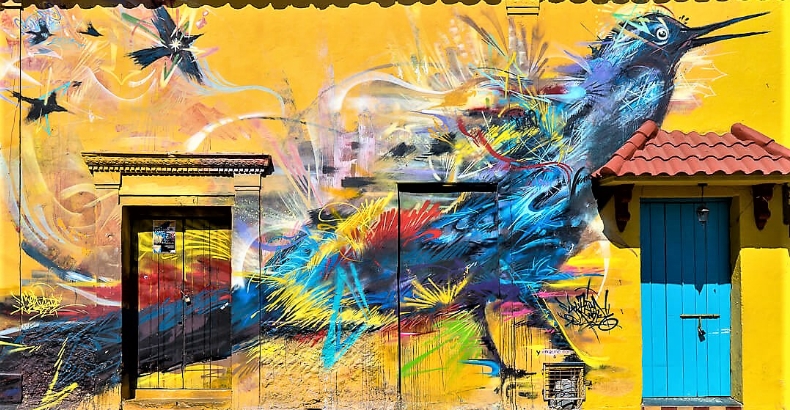 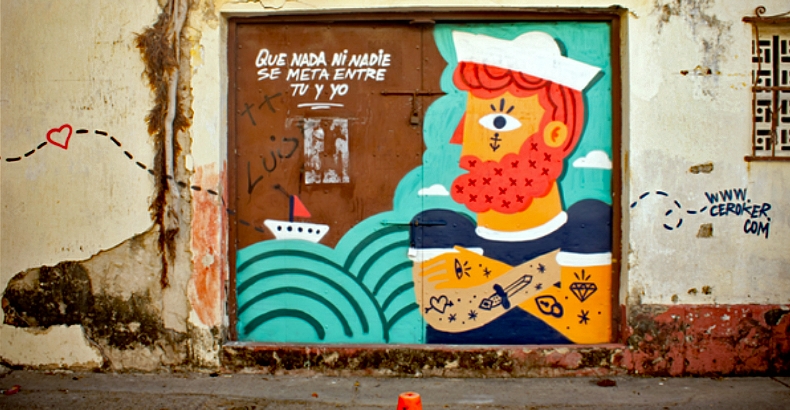 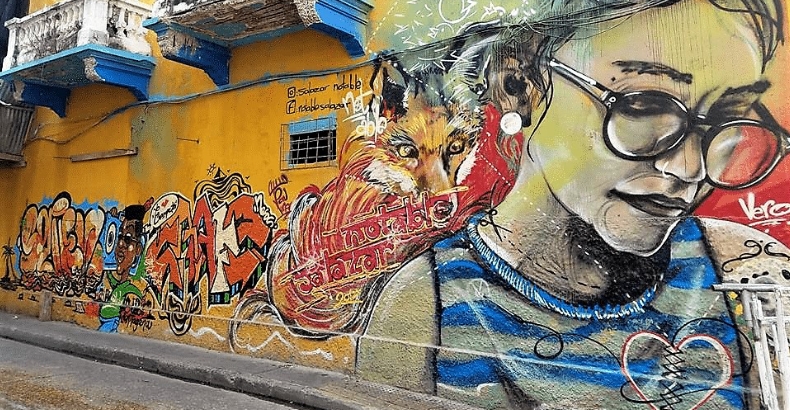 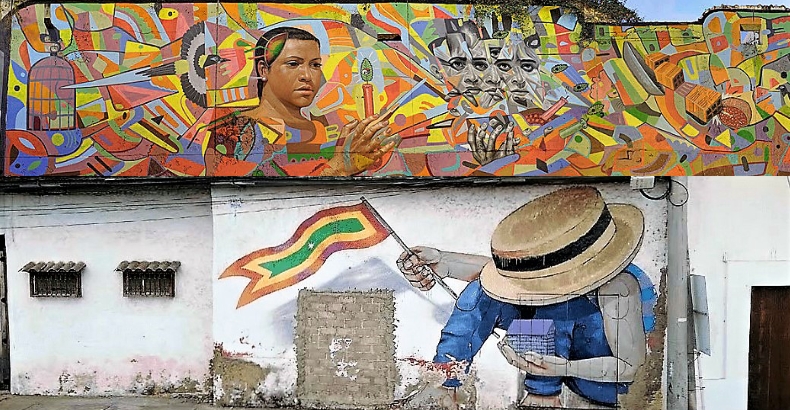 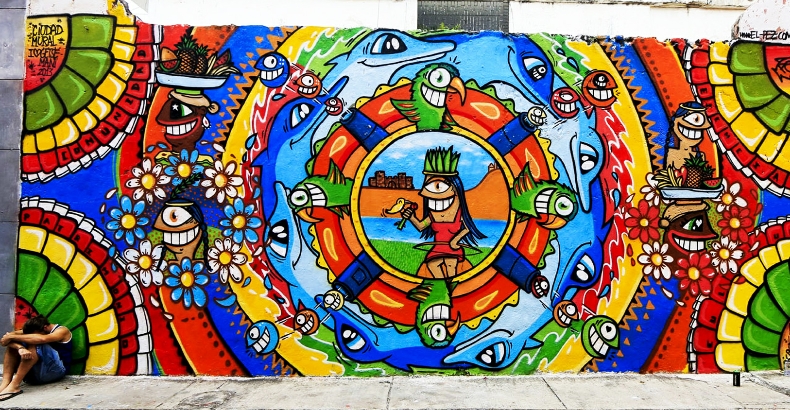 As mentioned in my previous article, there’s a lot going on in Cartagena de Indias, on the Caribbean shores of Colombia; but nowhere more so than the centuries-old neighborhood of Barrio Getsemaní.  There, the Spanish-colonial buildings—in what was once very much “the hood”—have been painted over in lively colors, as well as with fantastic murals by some of the world’s best-known graffiti artists.  Here are some of my favorites, and the stories behind them:

Prisma Afro by Vértigo Graffiti:  The largest mural in Colombia, the 12-story Prisma Afro (2012) was created by the artists DEXS, Ecksone, Ospen, Skida, Cazdos, Yurika, and Zas, who together comprise the artist collective Vértigo Graffiti.  Vértigo Graffiti’s mission, if you will, was to represent the black woman through graffiti, not as what Zas refers to as the stereotyped “party woman” with “curves,” nor solely as the mother-figure; but rather as the axis of black culture.  The hovering prism—through which light must pass before exploding into the colors of the rainbow—represents change and transformation.

Meanwhile, word on the street is that Vértigo Graffiti had originally been commissioned by Coca-Cola to create the mural as an ad for Sprite.  However, after allegedly receiving payment, the collective never completed the advertisement, opting to paint the prism in lieu of the can of Sprite as originally intended.

What remains definitively factual is that the mural’s size required that it be rendered in advance and projected onto the face of the building (rather like an enormous, well-lit color-by-numbers, if you will).  The process took six days to complete, during which time the artists used scaffolding with pulleys (akin to those used by window washers).  Which story do you like better?

Smiling Afro-Colombian Woman by DEXS: It’s hard not to grin along with the subject of this mural that comprises one side of the neighborhood’s Calle de la Sierpe.   Among Getsemaní’s most photographed works, the mural by DEXS—one of the founders of Vertigo Graffiti—has also become one of Getsemaní’s most recognizable.

Las Tres Guerreras by Fin DAC:  No stranger to Barrio Getsemaní, the Irish artist Fin DAC (nee Finbarr Notte) has painted some of the most well-executed and identifiable murals in town.  For this project—one he described as “inspiring” and “cultural”—he reached out to local Colombians via social media, asking for submissions of personal photos; with the goal of finding an indigene who could visually represent the gorgeous mix of culture and ethnicity for which the city is known.

Ana Luisa Muñoz, the woman chosen to be Fin DAC’s “Face of Cartagena,” modeled for a painting that the artist presented to the Museo Histórico Cartagena de Indias (where it's become a part of the museum’s permanent collection); after which he produced Las Tres Guerreras on the façade of Quintal Distrito Gourmet: A compelling representation of an indigenous Cartagenan; and one of the most copied works in the area (though few, if any, measure-up with respect to Fin DACc’s artistry or technique).

Get into it!
#Getsemaní