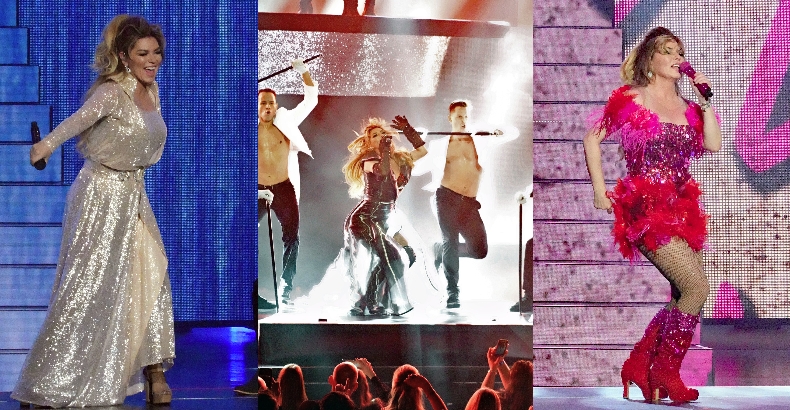 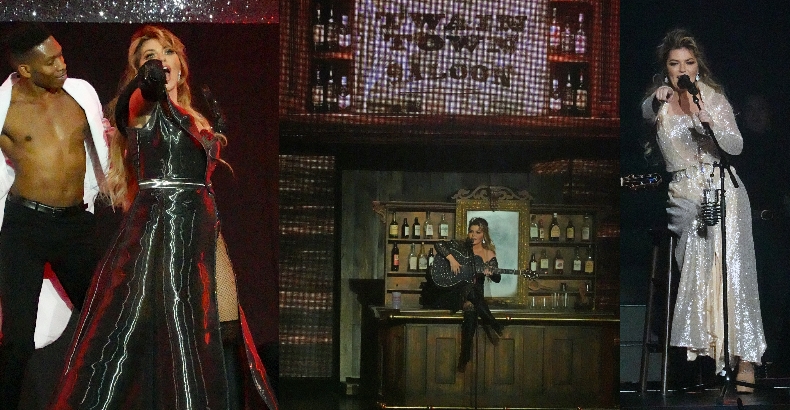 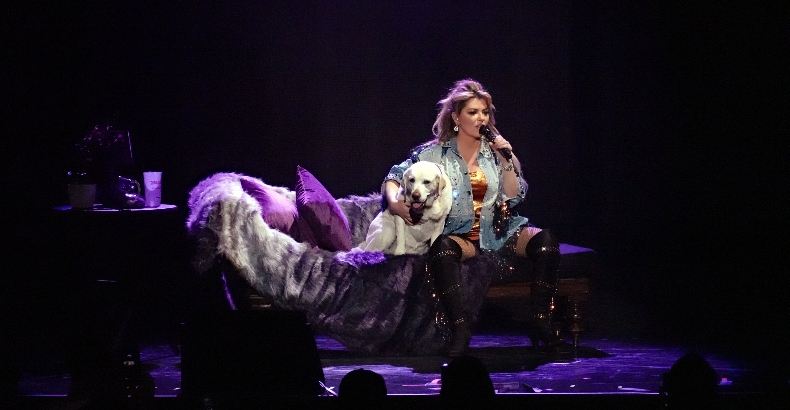 Normally I review a show or concert chronologically: I start from when the curtain goes up and follow-through to the last encore.  But with Shania Twain’s energy-filled new show, Shania Twain ‘Let’s Go!’ The Las Vegas Residency—currently thrilling audiences in the Zappos Theater at Planet Hollywood Resort & Casino—I figured I’d take a different tack, and have opted to highlight a few of my favorite aspects from an evening that (as of Opening Night) includes twenty-one songs from the undisputed Queen of Country Pop’s three-and-a-half decades as a hit-writing machine.

You Know These Songs

The best-selling female artist in the history of country music, Shania Twain has sold more than 100 million records, which makes her one of the best-selling musical artists of all-time.  This means that when Country Music Television’s Artist of a Lifetime sings, we know what she’s singing.  Whether it’s one of her hits from 1997’s Come On Over (the eighth all-time best-selling album in the United States), or a more personal song from her recent 2017 album, Now; unless you’ve been Kimmy Schmidt-ing in an underground bunker for the past twenty years, you’ll be singing and dancing along with Twain, throughout the evening.  Bonus: Many of the songs have received cool and contemporary remixes and updates.

Shania Is the Real Deal

Immense relatability is one of Twain’s greatest gifts as a contemporary artist, allowing her fans to see an actual human being singing to them, as opposed to a perfect facsimile of how a star “should” act.  Thus, whether it’s sitting on top of the bar, in the Twain Town Saloon (recalling her mother having little 8-year-old Shania—who helped support her family by singing in saloons—stand on the bar); or receiving slightly less help than she might’ve needed getting situated on a stool while draped in a heavily beaded Marc Bouwer gown (that resulted in her nearly sliding off, in an endearingly klutzy manner) while laughingly telling the audience how unglamorous she is.  Her authenticity, as well as the fact that today’s Shania seemingly gives no fucks, is clearly one of the things that her fans most love about her.

Prince Honored with Purple Mood and a Yellow Lab

One of Twain’s dogs, Melody (a sweet Labrador Retriever) joined her onstage in an intimate vignette doused in violet light that featured a fainting couch the shade of African violets, an ombre fur throw, and large decorative pillows (in a color that brought to mind McDonaldland’s Grimace) to sing “Forever and for Always” as a tribute to her late friend and almost-collaborator, Prince.  You see, it turns out that the Purple One had been a longtime Shania fan [checkout his funkified duet of “U’re Still the One” with New Power Generation vocalist, Marva King, HERE], and had reached out to Twain, asking to produce what would be her first new album in fifteen years (2017’s Now), before she’d even written it.  The two artists would trade numerous calls and e-mails; but Twain’s dysphonia* forced her to beg-off, as (to a lesser extent) did her fear of violating Prince’s well-known No Swearing in the Studio policy.  Unfortunately, by the time Twain and her voice were ready to join Prince in his studio, he’d returned to touring; passing in 2016 as the result of an accidental overdose.  To this day, Twain regards this as one of her greatest professional regrets.

You Can Be Part of the Show

As previous guests of the Zappos Theater can tell you, any concert is enhanced when viewed from one of the theater’s VIP Tables (maybe it’s the bottle of hooch or bubbly served tableside, or the dedicated VIP check-in); but Twain has opted to take it further, and is offering a couple of limited VIP packages that will ensure a truly unforgettable Let’s Go experience.**  The We’re Having a Party package [available for eight (8) guests at each show] that entitles guests to join Shania onstage, in the Twain Town Saloon, where men and women alike will don ruffled cha-cha skirts that will be on full display when they join the dancers in what Twain refers to as a “Country Can-Can,” while Shania sings “Whose Bed Have Your Boots Been Under.” Then, there’s the Come On Over package [only available to one couple per show] that finds the lucky couple brought onstage and seated in an intimate supper-club setting, at which time they are serenaded by Twain with her hit ballad “From This Moment On,” before she poses with them in an onstage photo-op.

There are so many wonderful parts of Shania Twain ‘Let’s Go!’ The Las Vegas Residency; but you’ll need to see it yourself to decide which are your favorites.

[Editor’s Notes: * Most commonly affecting women aged 30-50, dysphonia is thought to be caused by a problem in the basal ganglia of the brain, brought on by illness or stress.  While Twain originally attributed her dysphonia on a series of traumatic life events, she has more recently said it was caused by Lyme disease // ** Both the We’re Having a Party and Come On Over packages include the following: professional photographs to commemorate the experience; an autographed “Let’s Go!” limited edition lithograph; an exclusive behind-the-scenes tour; a pre-show reception featuring an open bar, appetizers, and a photo booth; a crowd-free merchandise shopping experience including exclusive “Let’s Go!” merch for VIP guests; a commemorative VIP laminate; and an on-site VIP Host.]