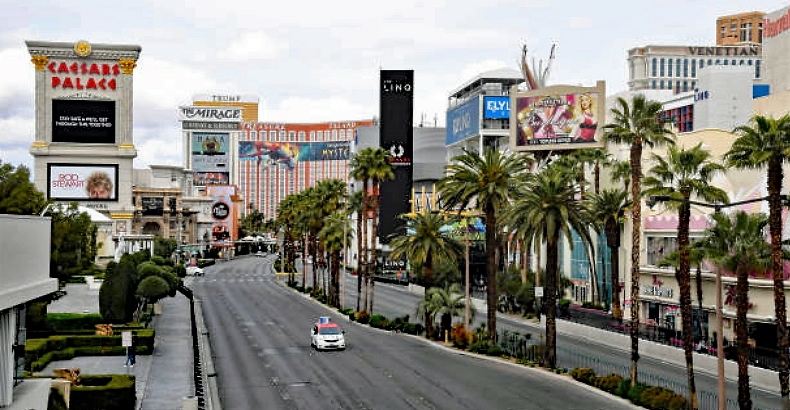 Nevada’s casino companies have shuttered their properties, resulting in the Las Vegas Strip and Downtown Las Vegas becoming ghost towns (as one assumes Reno and Lake Tahoe have, as well).  Thanks to the swift decisions and actions of these companies, all of the food that had been prepared for their numerous dining outlets—whether buffets, employee dining rooms, coffee shops, or celebrity chef-helmed gourmet rooms—has been turned into massive donations to the non-profit food pantries that feed those individuals and families facing the direst need.  Special thanks to CDC Gaming Reports (most notably Associate Publisher, Cory Roberts) for so closely tracking the incredible outpouring of support, food, and even cash donations made by these companies—and the hundreds of thousands of employees who work for them—making it possible for me to tell you about it.

The Cosmopolitan of Las Vegas has donated ten pallets of food items—primarily fresh produce and dairy—to Three Square, with contributions from all of the resort’s kitchens and restaurant partners.

Las Vegas Sands is donating a total of $250,000 in “unrestricted funds” to several important local organizations to serve our community during this time of need. Those organizations include Three Square, Communities In Schools of Nevada, and Share Village Las Vegas. These free-and-clear donations allow each organization to utilize the money to cover immediate and critical needs, as they arise.  And as one of the largest local donors of soap to Clean the World, the company had already distributed 35,000 hygiene kits (created during the company’s annual global disaster relief kit building event, last fall) to local charities; while 60 pallets of food—including fresh produce, proteins, and other food items—have been donated by The Venetian Resort Las Vegas to Three Square, requiring more than two semi-trucks to transport.

Station Casinos is staffing weekly food distributions at a trio of its properties.  Open to anyone in need, these locations—Boulder Station and Sunset Station, on Wednesdays; and Palace Station, on Thursdays—will open at 11am and remain open until all of the food has been distributed.

Treasure Island Hotel & Casino is supporting local community food banks, including My Father’s House, with surplus food; with perishable items (including fruit, dairy products, and vegetables) being distributed to those who need it most.

What’s more, Wynn’s Employee Advisory Council, on behalf of the employees of Wynn Resorts—who, each year, have the opportunity to contribute to the company’s Community Grant Fund, where every dollar donated is matched corporately—has approved community grants to local food banks, during this time, resulting in a $100,000 pledge to Three Square, from the Wynn Employee Foundation.

Said Matt Maddox (CEO, Wynn Resorts), “I am so proud of our employees and the donations that they have selflessly made throughout the year.  It is important in times like these that we give back to the community when it is needed the most.”

As for me, I couldn’t be prouder of the way these organizations have stepped-up and continue to show all the good that can be done, even during the direst of circumstances, when working together, on behalf of our community.

Get into it!
#VegasStrong