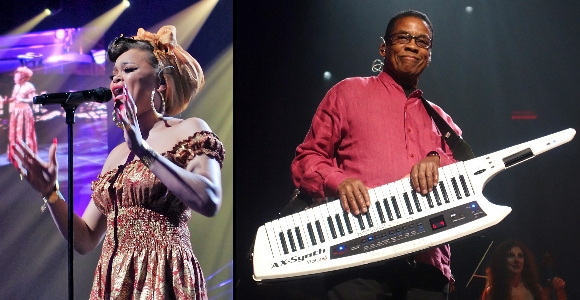 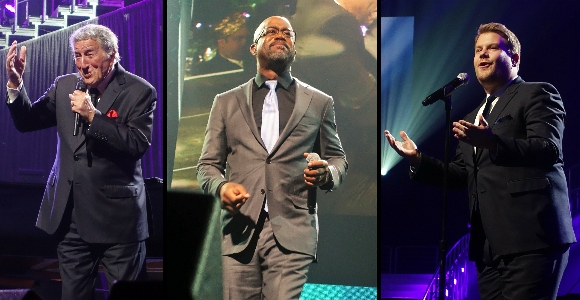 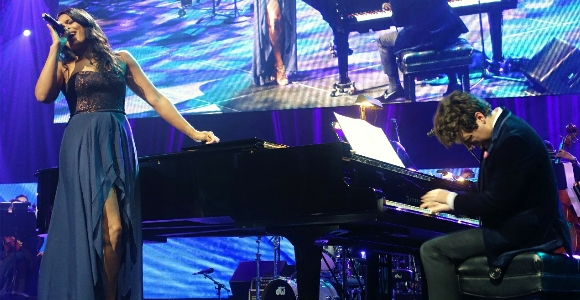 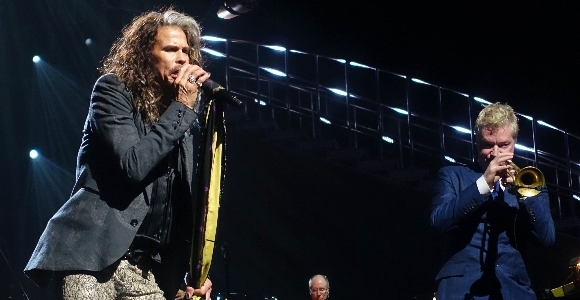 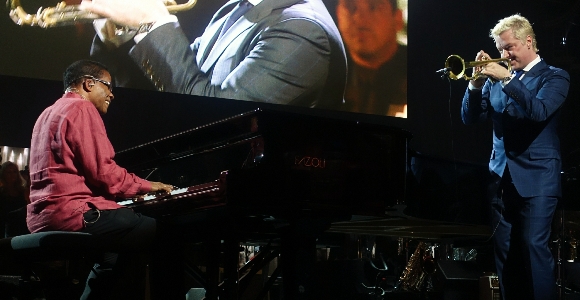 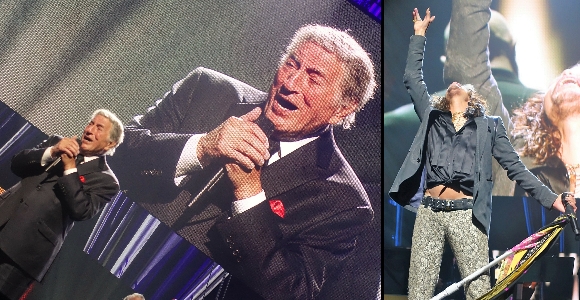 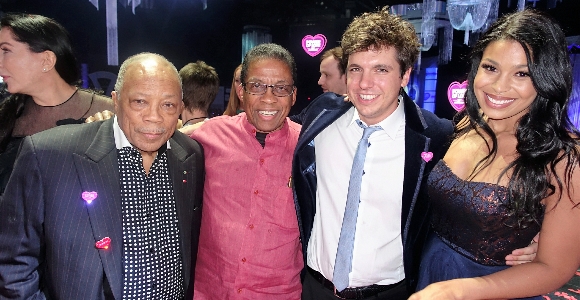 To conclude this four-part series on Keep Memory Alive’s 20th Anniversary Power of Love gala, I’m gonna focus on the performances by the incredible musicians and talented artists,  who performed at this once-in-a-lifetime concert, produced by the legendary Bill Edwards, celebrating the 90th birthday of the amazing Tony Bennett.

After the guests descended from the reception down onto the floor of the MGM Grand Garden Arena, and mingled as they found their tables; Robin Leach (aka ‘The Voice of Keep Memory Alive’) urged us to take our seats, so the program could commence.  Of course, with 1,800 guests, this is easier said than done, which required Robin having to repeat this a few times.

Once the din had been quelled to a hum, event co-Chair Quincy Jones introduced the amazing modern-day soul singer, Andra Day.  Previously having performed in Las Vegas, at the 2015 Life is Beautiful festival, Day is a shining example of substance in an industry that’s lately succumbed to the ‘all flash and no sizzle’ school.  Around the same time as she was performing, last summer, at LiB15, Katie Presley of NPR described her for All Songs TV, saying that the soul, jazz, and R&B singer possesses “Eartha Kit’s unflappable confidence, Amy Winehouse’s effortless grasp of classic jazz, Billie Holiday’s access to raw emotion, and Adele’s range and pop sensibility.”  Hey – when you’re right, you’re right.

Is it any wonder then, that music maestro Jones introduced her as “Our own Lady Day” when she was brought out to sing Irving Berlin’s “Steppin’ Out with My Baby” – the song widely credited for Tony Bennett’s career renaissance in 1993?  And let me tell you, she killed it.  On a more personal note, I had a moment with the soul siren on the red carpet, and she was positively delightful, complimented me on my jewelry and turban, and posed with me for a fabulous photo (on the condition that we “do it, right” with my arm around her waist, showing-off my newly acquired opal-and-diamond cocktail ring).  With voice, face, talent, body, style, and charm, what’s not to love?

Then, as the first course was served (read all about the dinner in Part 3, KMA Fêtes Tony Bennett – The Party), James Cordon, OBE, host of CBS’ The Late, Late Show, and creator of viral juggernaut “Carpool Karaoke” – not to mention the 2012 Tony Award and Drama Desk-winner for ‘Best Actor in a Play’ (for his portrayal of ‘Francis Henshall’ in One Man, Two Guvnors) – got groovy with his take of Duke Ellington’s 1940 hit “Don’t Get Around Much Anymore” (that was originally an instrumental titled “Never No Lament” until Bob Russell added the lyrics in 1942).

I spoke at length about Dan Orlando, in Part 1 (Dan Orlando is Bill Edwards’ Present to KMA), but as ready as I was for this returning favorite to tear things up; I wasn’t at all prepared for the dazzling chemistry between him and another Power of Love alum, Jordin Sparks.  As I told Orlando and producer Bill Edwards, after the concert, you’d have thought Sparks and Orlando had been touring together for years, as opposed to an afternoon of rehearsals.

The duo performed a trio of songs that included Cy Coleman and Carolyn Leigh’s 1959 standard “The Best is Yet to Come” (best known for being the last song Frank Sinatra performed, in public); Mamie Watts and Sid Wyche’s 1955 composition, “Alright, Okay, You Win” (originally composed for the Count Basie Orchestra, and taken to the top by Miss Peggy Lee); and Duke Ellington and Irving Mills’ swing-tastic “It Don’t Mean a Thing (If It Ain’t Got That Swing)” that concluded with Sparks scooting and Orlando scatting, with a flair not seen since the passing of the late, great Mel Tormé.

Next came Grammy-winner Darius Rucker.  The former Hootie and the Blowfish lead singer and rhythm guitarist turned award-winning solo country artist took us on a trip “On the Sunny Side of the Street” (interesting tidbit – while the 1930 song is credited to Jimmy McHugh, with lyrics by Dorothy Fields, many musical historians agree that the it was among a trio of songs composed by Fats Waller, who sold the rights when facing dire straits).

Following this, and another course in our meal, jazz genius Herbie Hancock sat down at the handmade Fazioli Pianoforti (brought in at Hancock’s specifications), and proceeded to tease us with an instrumental version of his 1983 hit “Rockit” (the first jazz hip-hop song), before segueing into his 1964 hit, “Cantaloupe Island” (that he wrote while a member of Miles Davis’ quartet), that he performed as a duet with chart-topping and Grammy-winning trumpeter, Chris Botti (who was last onstage at the MGM, when he performed with Barbra Streisand).  Hancock and Botti then played “Chameleon” – the jazz standard that Hancock composed, in 1973, as a collaboration, with Bernie Maupin, Paul Jackson, and Harvey Mason.

After another culinary interlude, there was an arts presentation by Minnie Driver (that you can read about in Part 2), followed by rock-god Steven Tyler taking the stage to salute Bennett.  With Botti once again on the horn, the two performed the Joe Goodwin, Larry Shay, and Mark Fisher standard, “When You’re Smiling” (immortalized by Satchmo, himself, Louis Armstrong).  Following this, the Aerosmith lead heard someone in the audience shout a request for the rock outfit’s most famous ballad, “Dream On” – to which Tyler replied “’Dream On?’ Dream on!  Go watch a Skittles commercial!”  Then he performed the band’s 1988 Diane Warren-penned power-ballad, “I Don’t Want to Miss a Thing” that had been Aerosmith’s first song (in the band’s nearly three decades) to debut at number one.

Finally, as dessert was served, it was time for the aural dessert to be presented, and the evening’s honoree, Tony Bennett took to the stage, well after 11pm.  You could hear the proverbial pin drop (which rarely happens in Las Vegas), as the audience came together.  Singing “Watch What Happens” from the 1964 film, The Umbrellas of Cherbourg, starring Catherine Deneuve (the song was penned by the film’s composer, Michel Legrande, as “Recit de Cassard” – before being translated into English, by Norman Gimbel, and recorded by Bennett).

Bennett then performed another Michel Legrande composition, this time the Academy Award-nominated old-school slow-jam “How Do You Keep the Music Playing?” with lyrics by Marilyn and Alan Bergman, originally performed as a duet by Patti Austin and James Ingram, for the 1982 film, Best Friends.  Bennett has himself recorded the song as a duet with George Michael (on the 2006 album Duets: An American Classic) and with Aretha Franklin (on the 2011 album Duets II); but as a solo it was even more captivating.

It truly was the concert of the year; and I couldn’t do better than to close with the words of Tony Bennett, who said “What a wonderful benefit!  We did so many wonderful things, tonight; for so many people!”