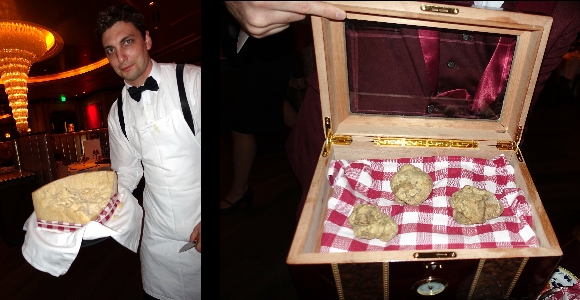 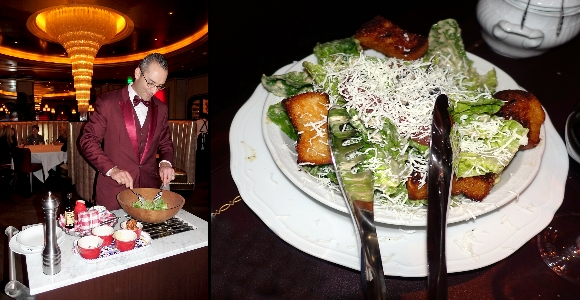 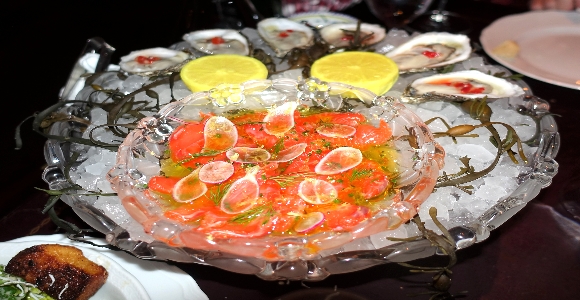 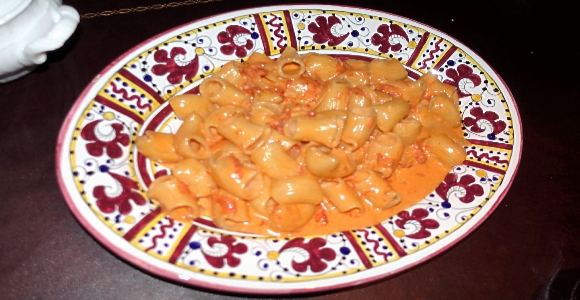 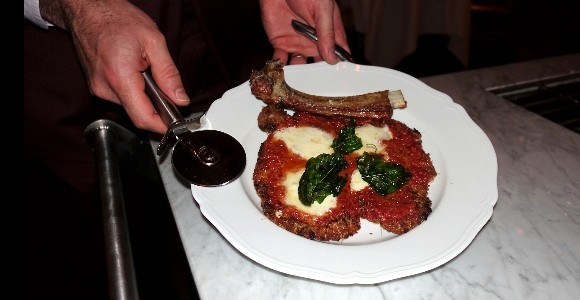 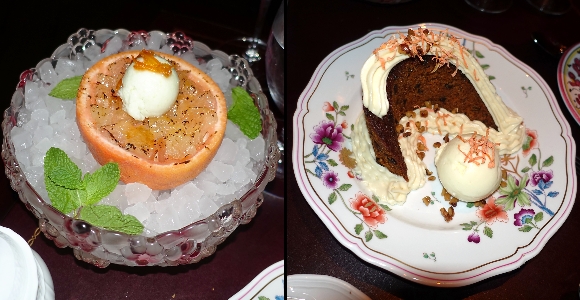 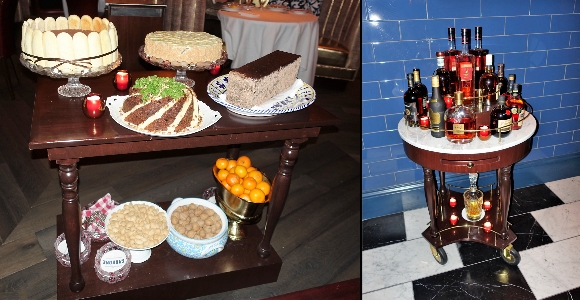 The first thing that one notices, upon entering the dining room, at Carbone’s Las Vegas outpost, in the culinary cul-de-sac at ARIA Resort & Casino, is the jewel-toned hues used by Ken Fulk in his designs of the appropriately named Blue Room and Red Room (the bar and dining room, respectively).  The former is a bit more bustling, while the latter is decidedly glam; and the two fit together marvelously.  And, as y’all know, I’m a sucker for a flattering lighting story; so, I was sold the moment I was seated in one of the crimson banquettes that surround the Red Room, like so many box seats at the opera, with a view of the goings-on around the room, and the dazzling vintage Venini chandelier.

Then there’s the food – straight out of a Scorsese film, but prepared with SoHo sophistication.  Table captains, in maroon Zac Posen suiting, coordinate your meals, and prepare many of the items, tableside.  The Caesar alla ZZ is not for the faint of heart (or anchovy), and is guaranteed to put a hitch in anyone’s giddy-up.  If your captain, in listing that evening’s specials, mentions a Thick-sliced (aka “sashimi-style”) Wild Coho Salmon Crudo, get on board, immediately – as it’s a fleshy treat from the Pacific Northwest, and is prepared marvelously.

But if you really want the dish that seems to have tickled even the most fickle of palates, then go directly to the Spicy Rigatoni Vodka, ‘cause that zesty dish is gonna light up your life.  I don’t know what I was expecting, but that piquant pasta is the tops!

There was one faux pas, committed by our captain, Mikey (who was otherwise sensational); but he so adroitly nipped it in the bud, that I’m forced to retell it, here.   When Mikey brought humidor with the White Alba truffles by our table, he mentioned that one of the specials was your choice of Fettuccini or Rigatoni with Fresh White Truffles.  What he neglected to do, was inform my stepmother (who ordered the Fettuccini special) was that the truffles were thirty-some dollars per ounce; and that with two ounces per portion, and two portions per serving, that the Fettuccini special came to $150 per person (and was listed on the check as two $75 servings).

So, the check being paid, my father was in high dudgeon.  And as Mikey returned to our banquette, with the credit card receipt for my dad to sign, my dad was ready to let loose with a high-decibel rant about never eating in that restaurant ever again.  But before the words were out of his mouth, Mikey, calmly leaned over and said “Mr. Shulman – I realized that I had never told you the price of the special, this evening; and that’s completely my fault.  So, I spoke with my manager, and we’ve removed the special from your bill.”  Not only had he owned-up to his error, but – far more impressively, to my mind – had anticipated the agita this was likely to cause, and preemptively put-out any flames before they were anything more than sparks. Now that’s a class act.  And, as I pointed-out to Mikey, “Now, if you don’t see my dad, at Carbone; know that it’s because he flaked, and not out of spite.”

It’s also worth mentioning that on this Friday night, not only were a number of Las Vegas power players on the scene (as I was leaving, I visited for a spell with Madeleine & Don Andress and Sheryl & Rob Goldstein, supping at a table for four; then came across Leora & Rob Blau closing their check at the bar and entering the dining room).  Furthermore, corporate commitment to Carbone was made crystal clear by the trio of executive foodies who stopped by our banquette to check-in, including Joseph Banchero (CARBONE, General Manager), Stewart Patchefsky (ARIA, Director of Food & Beverage), and Josef Wagner (ARIA, Vice President of Food & Beverage).

For dessert, I tried the Brûléed Grapefruit with Fennel (zesty, fresh, unique); while my folks split the Carrot Cake with Ginger Ice Cream (really cool presentation, delicious).  A few of my favorite moments were the tableside serving of the fresh Parmesan, and when – upon serving our coffees and espresso, the gentleman whipped a bottle of Sambuca out of his apron.  Then, after the meal, a trio of tricolore marzipan cookies (made to look like miniature Italian flags), were served with a bottle of Carbone’s proprietary blend of Limoncello, that was poured, and then left on our table, to be drunk at our leisure.  A lovely touch to a terrific meal, at one of the great new Las Vegas restaurants.