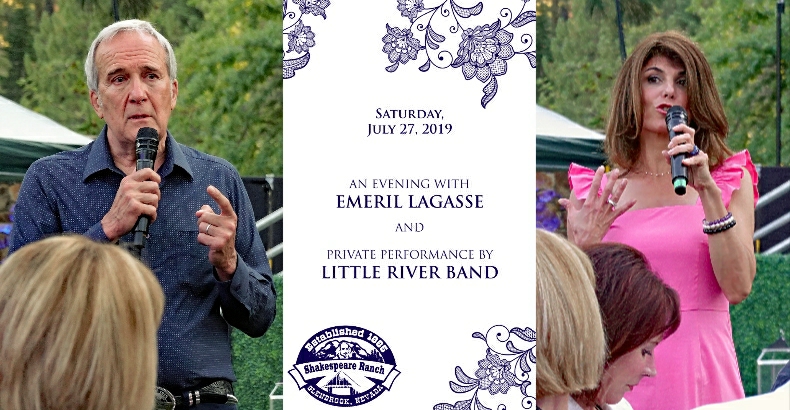 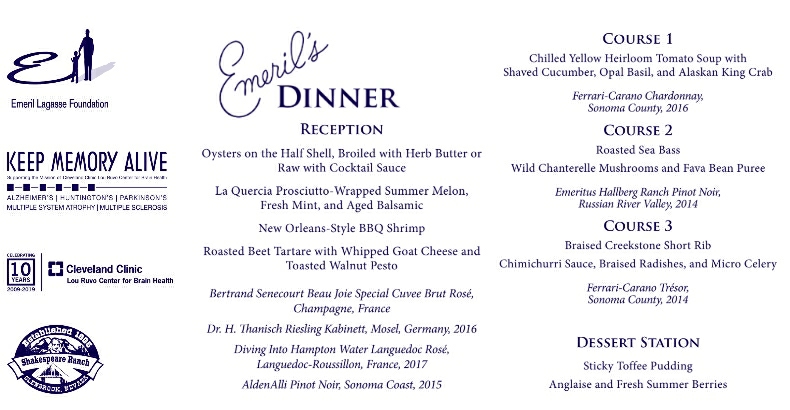 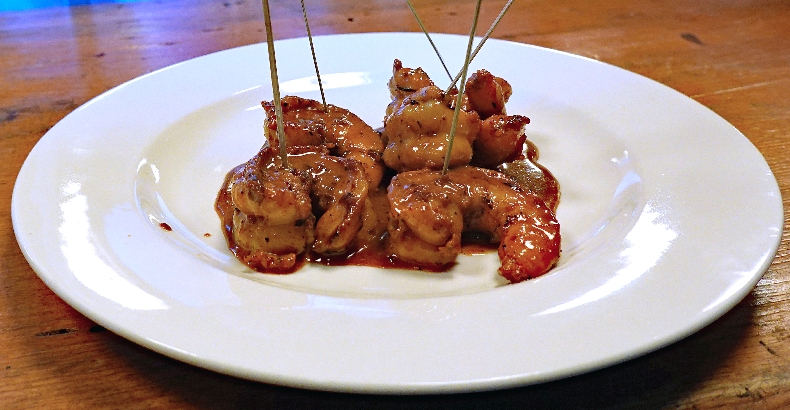 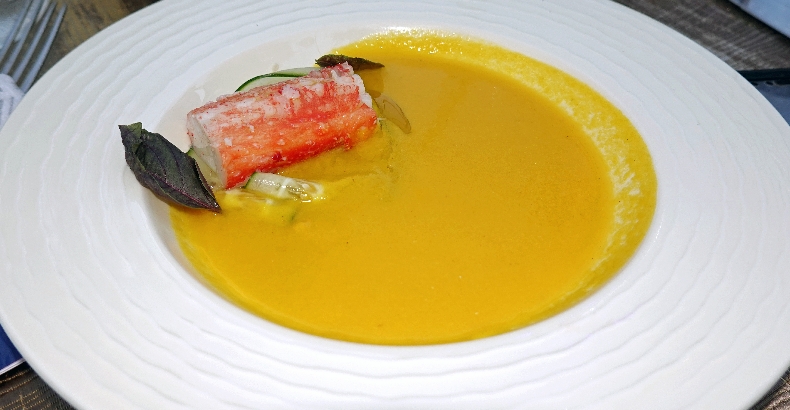 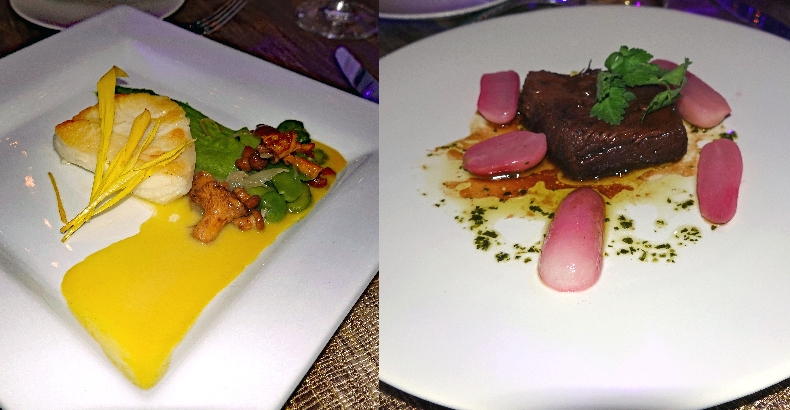 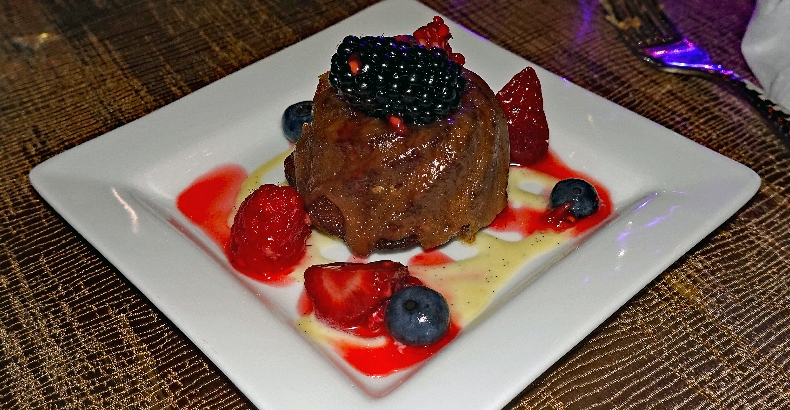 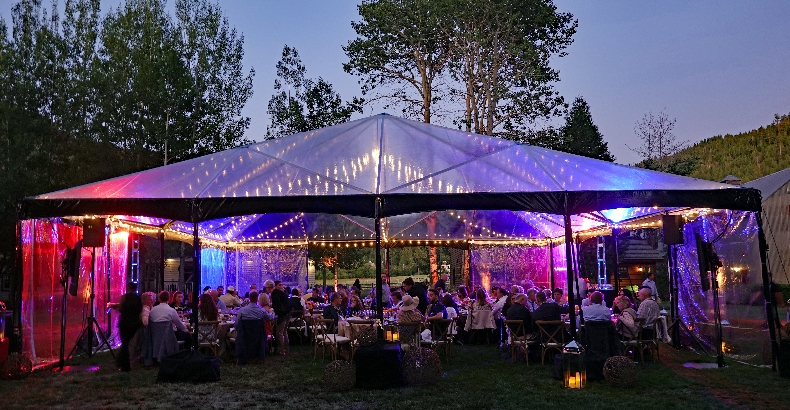 One needn’t have been Sherlock Holmes to deduce what An Evening with Emeril Lagasse was going to entail: There’d be a lot of food, all prepared with that supped-up flavor palate upon which the famed chef and restaurateur has built his acclaim.  And while every morsel would be a treat for the taste buds, to be sure, none of it was gonna be fussy, or confusing, or overly pretentious.  In short, everything we all love about Emeril Lagasse.

Now, when one takes into account that this Evening with Emeril was a benefit for Keep Memory Alive, and (not coincidentally) was being held at Shakespeare Ranch (the postcard-worthy lakefront retreat of KMA co-Founders Camille and Larry Ruvo, in the tony Lake Tahoe enclave of Glenbrook, NV), that there would be copious amounts of the world’s most sought-after top-shelf spirits and most celebrated cuvées, all provided with a huge helping of hospitableness – well, that literally goes with the territory.  So, what might come as a surprise to those not intimately involved in the planning of such an affair?  I’m so glad you asked.

First of all, that setting, on the shores of Lake Tahoe, is nothing short of epic.  True, I tend to prefer an urban setting to a rustic one; but during dinner I borrowed a golf cart, and hightailed it down to the beach, so I could photograph those magnificent vistas and spectacular sunsets.  And not for nothing, the Family Ruvo ranks among the most charming and gracious hosts I’ve encountered, on either side of the Mississippi.  Meanwhile, Anna Robins (KMA’s HBiC of Special Events) is a rockin’ sockin’ luxury event-staging machine; and while she’s constantly in motion, for hours on end (invariably shod in 4-inch heels, mind you), no detail is too small to escape her notice.

The Creole culinary carnival commenced with a quartet of hors d’oeuvres, including Oysters on the Half Shell (served broiled with herb butter or raw with cocktail sauce), La Quercia Prosciutto-wrapped Summer Melon (with fresh mint and aged balsamic), New Orleans-style BBQ Shrimp (for those of you wondering which dishes were most worthy of an Emerilism, these curly crustaceans really kicked it up a notch!), and Roasted Beet Tartare (with whipped goat cheese and toasted walnut pesto); all accompanied by bottomless pours of Bertrand Senecourt’s Beau Joie Special Cuvee Brut Rose (Champagne, France), 2016 Dr. H. Thanisch (Erben Müller-Burggraef) Bernkasteler Badstube Kabinett Riesling (Mosel, Germany), Jon Bon Jovi and Jesse Bongiovi’s 2017 Diving Into Hamptons Water Languedoc Rose (Languedoc-Roussillon, France), and the 2015 AldenAlli Pinot Noir (Sonoma Coast, CA) – the last of which is named, in part, for Alden Lagasse, herself.

Dinner was held under a pavilion of transparent plastic sheeting that created a sense of intimacy in a wide-open space, eliminated any interference from the elements, and looked particularly fierce; while thanks to some especially clever draping, any humidity was alleviated by cross-ventilation.  There, a couple hundred supporters sat supping on dinner a la Emeril, and it was delightful, delicious, and de-lovely.

Course 1 was served with the sun still in the sky, which was especially fitting, as it consisted of a bowl of Chilled Yellow Heirloom Tomato Soup (with shaved cucumber, dark opal basil, and Alaskan king crab); paired with the 2016 Ferrari-Carano Chardonnay (Sonoma County, CA).  Now, it should go without saying that Emeril – a chef renowned for his ‘New New Orleans’ cuisine who hails from Massachusetts – knows a thing or twelve about soups; and while neither a roux-y Gumbo nor a creamy Chowder would’ve been apropos in those circumstances, that chilled tomato soup was a yummy bowl of sublimely seasoned sunshine topped off with a huge hunk of crab meat.  I’m smiling just remembering it.

Course 2 (aka the “fish” course) consisted of a Roasted Sea Bass (with wild chanterelle mushrooms and a fava bean purée); paired with the 2016 Emeritus Vineyards Hallberg Ranch Pinot Noir (Russian River Valley, CA).  It was light, and despite the bright yellow puree, was far less buttery than it looked.  Also, the sun was starting to set, so right around here I skedaddled to the beach to take some photos.

Course 3 (the “meat” course, if you will) was a Braised Creekstone Short Rib (with chimichurri sauce, braised radishes, and micro celery); paired with the 2014 Ferrari-Carano Trésor (Sonoma County, CA).  The short rib was tender and the wine – the vintner’s prestige blend of five of the “noble” Bordeaux varietals* (Cabernet Sauvignon, Malbec, Petit Verdot, Merlot, and Cabernet Franc) from the best selections of their vineyards in the Alexander, Napa, Knights, and Dry Creek Valleys – with its plummy, cassis-filled aroma, and notes of chocolate, cedar, and smoke leading to a blueberry and cherry-tinged finish was an ideally suited accompaniment to the braised beef.

And then came Dessert.  And what a dessert!  While Emeril’s Sticky Toffee Pudding might not be the official mascot for the American College of Cardiologists, it should probably be served with a referral to a good interventional cardiologist.  It was sweet, and buttery, and (between the dates, the Meyers rum, the molasses, the ginger, and the orange zest) was oh-so-yummy in my very full tummy.  Meanwhile, to assuage any fears I had of possible arterial blockage, Brianna Ruvo confirmed that her folks do indeed keep a portable defibrillator in the barn (which Camille later assured me that she is certified to use).  And just when I thought “I’m stuffed, but something cool and light would really hit the spot,” there was Chef Luciano Pellegrini scooping his artisanal vegan gelato.

There’s more to tell, about the tear-inducing video about the role of the caregiver in neurodegenerative diseases; the heartfelt words given by Camille and then Larry (both of whom iterated that “Until there’s a cure, there’s a caregiver,”) and later, Rhonda Carano and Chef Emeril, himself; and the good times that rolled into the wee hours thanks to a live performance by Yacht Rock stalwarts Little River Band; but it’ll have to keep for another time.

[Editor’s Note: There are eight ‘noble’ Bordeaux varietals, the remaining (and rarer) three being St. Macaire, Gros Verdot, and Carmenère.]