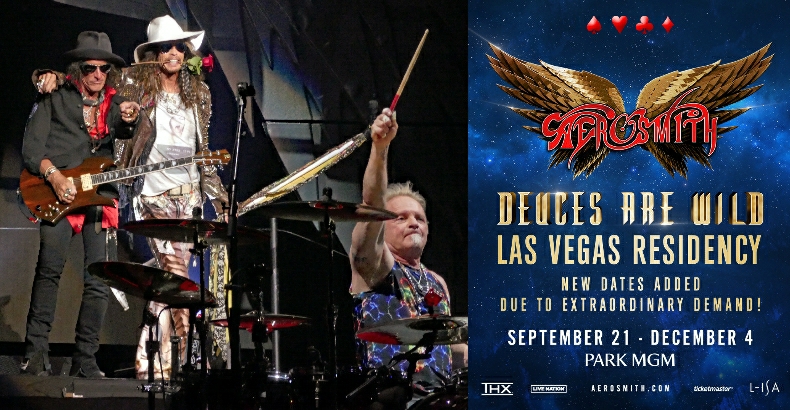 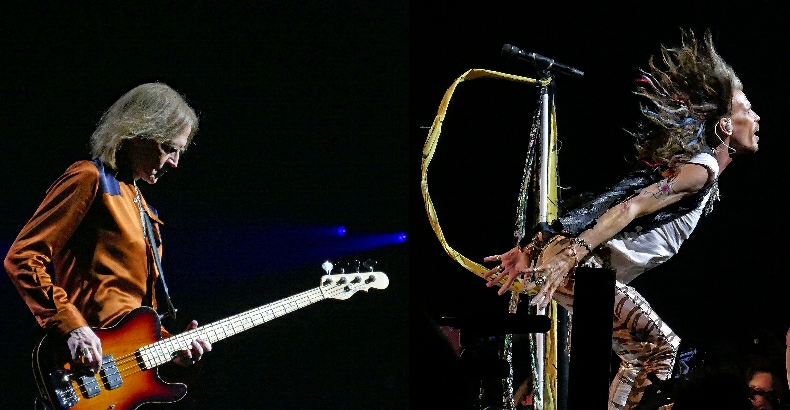 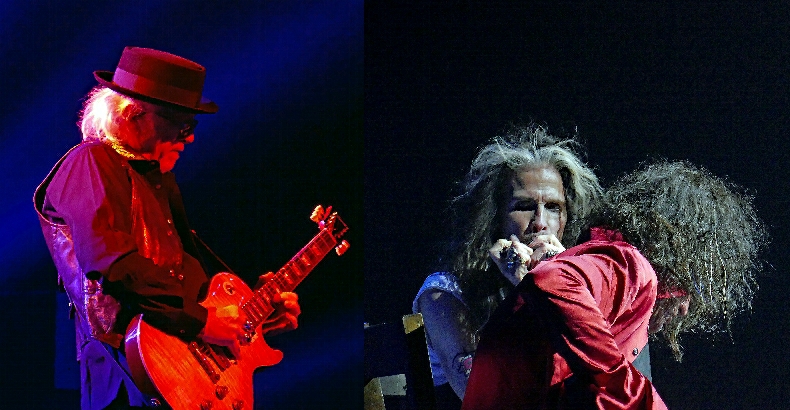 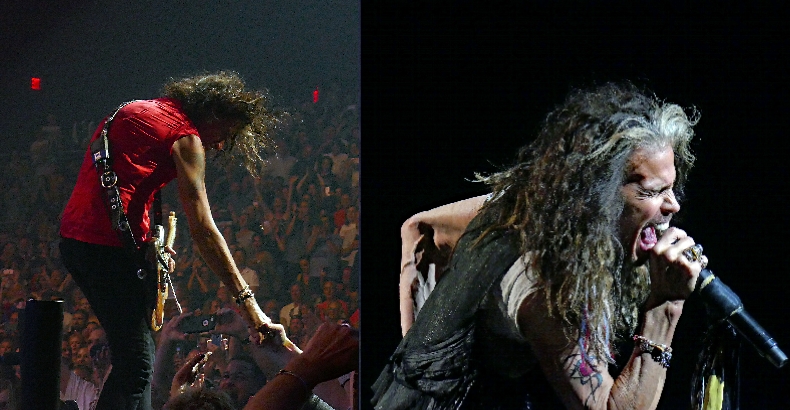 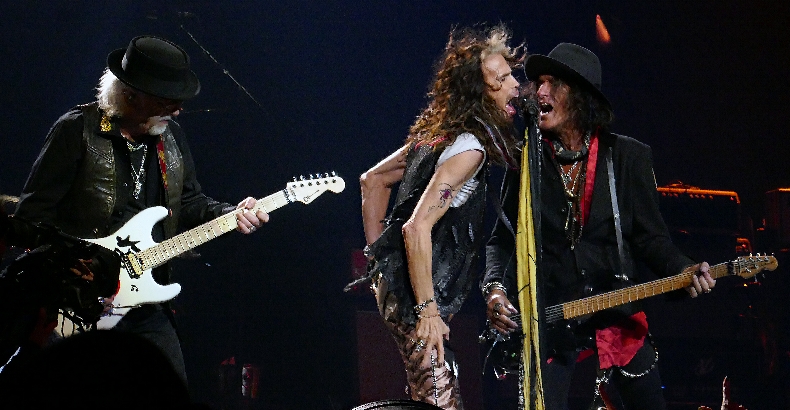 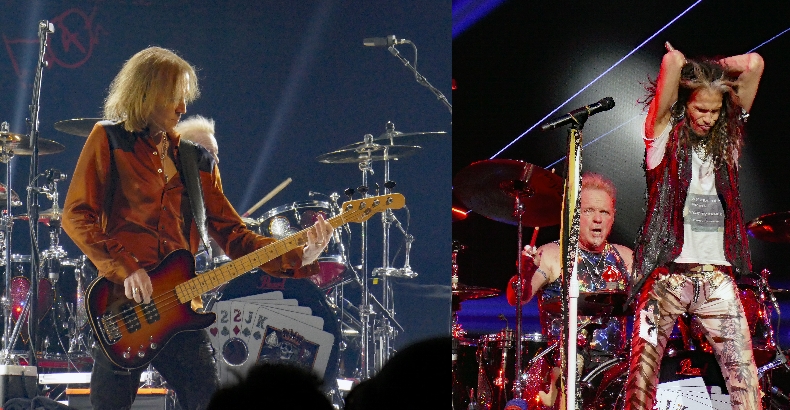 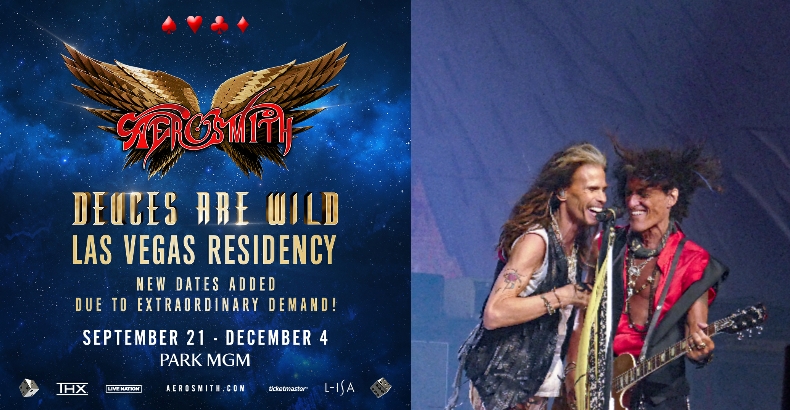 Aerosmith has returned to the Park Theater at Park MGM with the second leg of their Live Nation-presented residency show, Aerosmith: Deuces Are Wild (running through July 09); and it’s immediately apparent why there’s been so much demand for tickets that the residency has been extended – with a pair of festival appearances in late July (Minnesota’s Twin Cities Summer Jam, and the Roxodus Music Fest in Ontario, Canada); with dates back East, through August (at MGM National Harbor, Borgata, and MGM Springfield); and then with Legs 3 and 4 returning to Park MGM (in September/October, and November/December, respectively): With this first residency, and after nearly a half-century together, are doubling-down on their legacy as America’s Greatest Rock & Roll Band.

By the time of their 2001 induction into the Rock & Roll Hall of Fame, Aerosmith’s Tom Hamilton (bass), Joey Kramer (drums), Joe Perry (guitar), Steven Tyler (vocals, keyboards), and Brad Whitford (guitar) had not only recorded one of the greatest rock anthems of all-time (“Dream On”), one of rock’s most iconic openings (“Sweet Emotion”), and the song that would go on to bridge the rock-rap divide (“Walk This Way”); but had blazed brightly, partially disbanded, regrouped, and staged what’s been quite-deservedly called "the single most successful comeback in the history of heavy metal, if not all of popular music." *  Mind you, that was after only the first three of the band’s five decades, together.

Aerosmith: Deuces Are Wild begins in a very Vegas-y way, ** while a mini-documentary about the band is screened.  Then the band takes the stage, and it’s at this point that everyone stands-up and remains standing for pretty much the rest of the concert.  And make no mistake about it, Deuces Are Wild is a hard rock concert posing as a residency (or perhaps it’s the other way around), as few (if any), have been in this era of Las Vegas entertainment.

And what a concert!  You’re gonna hear early Aerosmith hits (in addition to those mentioned, above), like the power-ballad “Seasons of Wither,” the protopunk “Toys in the Attic,” the growling “Back in the Saddle,” and my favorite OG Aerosmith hootenanny, “Mama Kin;” as well as their covers of Fleetwood Mac’s “Stop Messin’ Around,” and of Tiny Bradshaw’s 1951 jump-blues standard “Train Kept A-Rollin’.”*** The band’s post-comeback oeuvre is featured by songs including the rollicking “Dude (Looks Like a Lady)” the single that kicked off the band’s late-‘80s resurgence, “Cryin’” (the first of the band’s trilogy of music video’s starring a pre-Clueless Alicia Silverstone), in addition to popular songs like “Livin’ on the Edge,” “Love in an Elevator,” and the Diane Warren-penned rock power-ballad “I Don’t Want to Miss a Thing” (the band’s first single to top Billboard’s Hot 100).

After a blink-and-you-miss-it break, Messrs. Hamilton, Kramer, Perry, Tyler, and Whitford return for a searing encore that begins with the iconic “Dream On;” continues with their popular cover of the Beatles’ “Come Together” (from the 1978 film, Sgt. Pepper’s Lonely Hearts Club Band, and its soundtrack); and concludes with the song that introduced them to a new generation of fans, “Walk this Way.”

What you aren’t going to hear are classics like “Same Old Song and Dance,” or their cover of the Shangri-Las’ “Remember (Walking in the Sand).”  Nor will you hear later hits such as “Rag Doll” (which was a bummer for me), “Angel,” “Crazy,” “The Other Side,” or “Pink.”  Perhaps most surprisingly though was the omission of “Janie’s Got a Gun” – though one assumes this is due to societal pressure and/or political correctness in light of ever-increasing gun violence.

But if there’s one thing about Aerosmith that seeing Aerosmith: Deuces Are Wild makes abundantly clear, it’s that these five guys still rock (hard), and they’re still having one heckuva time doing so.

Get into it!
#Aerosmith