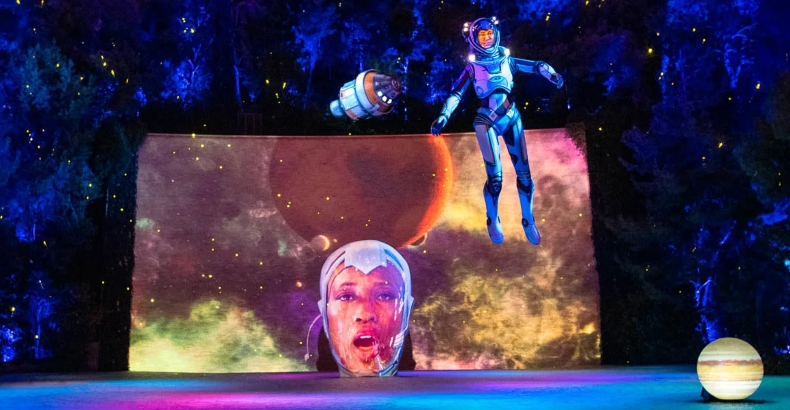 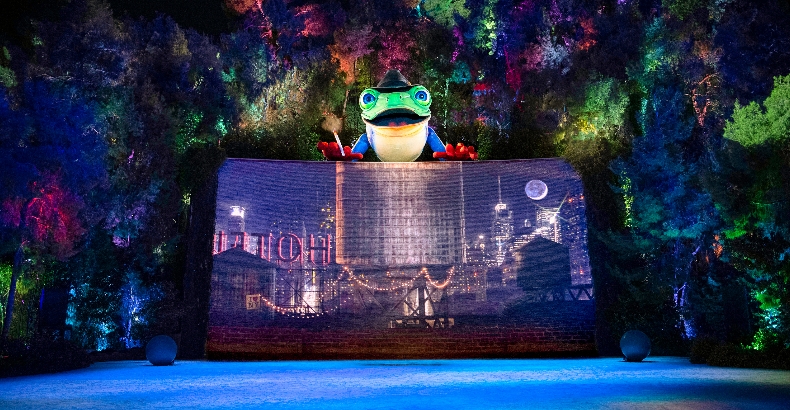 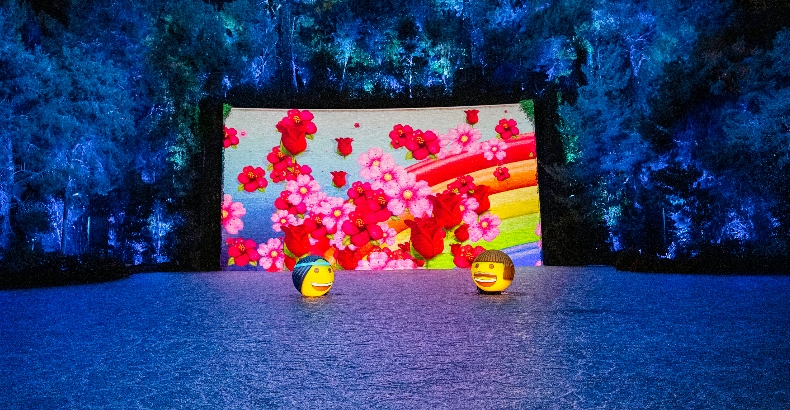 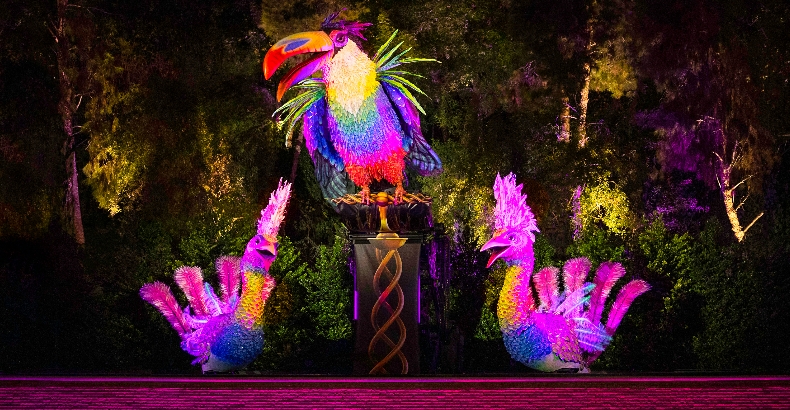 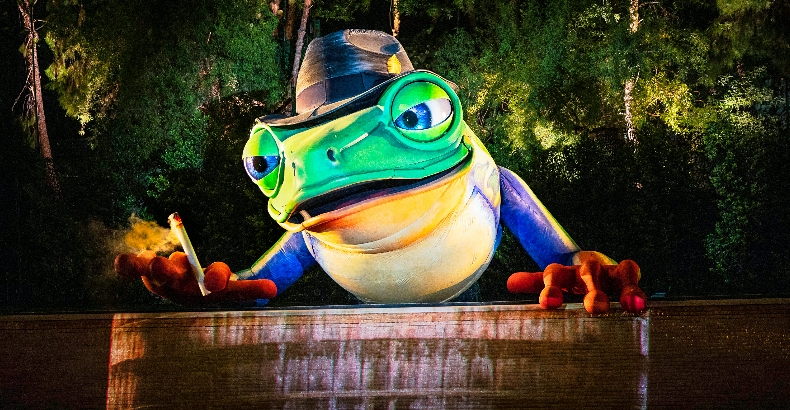 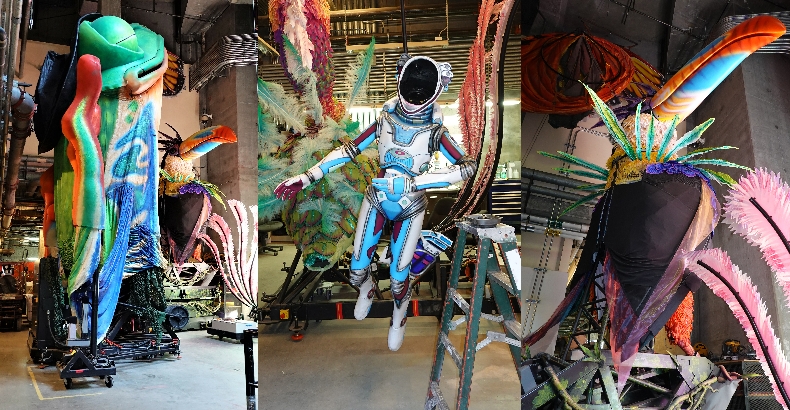 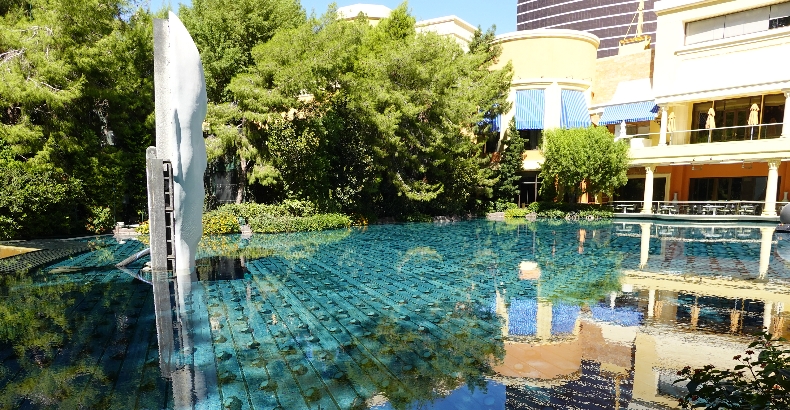 As mentioned in Part 1 of this series, the new Lake of Dreams show at Wynn Las Vegas consists of a dozen songs, ranging from Classical to Contemporary, each featuring a custom video directed and choreographed by Emmy-winning director Kenny Ortega that plays on the enormous 45’ x 90’ performance waterfall, and (depending on the song) on and/or over the three-acre lake that’s surrounded by an 11-story mountain covered with 1,500 towering evergreens and lit with 5,500 LED lights.  Each vignette also features one or more of Emmy-, Drama Desk-, and Tony-winning production designer Michael Curry’s animatronic creations (take that, Country Bear Jamboree!), and it’s all lit to the proverbial gods by legendary lighting director Patrick Woodroofe OBE RDI; all of it so technologically cutting-edge that—due to situations necessitated by coronavirus safety protocols—Woodroofe was able to set the previously mentioned lights by remote from his studio in London, in conjunction with producer Rick Gray (Wynn’s GM of Entertainment Operations).

The fourth single from her eponymous debut album, “Lucky Star” would be the first of Madonna’s record-breaking 16 consecutive top-five hits, and illuminates the Lake of Dreams with ELECTRA, a spiked, Sputnik-like ball of lights that doesn’t just move vertically, but also laterally, across the Lake toward the guests.  Starlight, star bright, ELECTRA STARBURST’s gonna be the first star you’ll see at the Lake of Dreams each night.

EMOJI ORBS
“I Got You Babe” by Sonny Bono
(Look At Us, ATCO Records, 1965)
Performed by Sonny and Cher

This vignette is particularly clever in that it juxtaposes the sweet Sixties song that Sonny wrote as a duet for himself and Cher with (on the Lake) the EMOJI ORBS on which are lit various emojis that correspond with the lyrics of the song, and (on the performance waterfall) an animated text message exchange between a pair of flirtatious lovers.

Considering it’s a cover of a song about New York, originally sung by Liza Minnelli in Martin Scorsese’s 1977 film, New York, New York; Frank Sinatra’s cover of “Theme from New York, New York” is an absurdly Vegas-y song, in the most wonderful way.  And, when paired with Michael Curry’s SINGING FROG—now sporting a rakish Fedora and gesticulating with a smoldering cigarette (with real smoke!)—it’s right on the money, baby!

The LADY BIRDS are a trio of Michael Curry’s larger-than-life animatronic puppets—measuring 28-feet tall, and weighing more than 17,000-pounds, each—that provide feminine energy as a counter-balance to the decidedly masculine SINGING FROG.  One of the BIRDS’ two numbers, the anthemic “Born This Way,” (a battle-cry of self-empowerment for both the LGBTQ+ community and racial minorities, alike) was described by Lady Gaga to Billboard, as her “This-is-who-the-f*ck-I-am” song.   “Don’t be a drag, just be a queen,” indeed.

One of my favorite vignettes, THE NIGHTCLUB deftly melds the now-sounds of The Chainsmokers—arguably Wynn’s modern-day equivalent of a house band; albeit one with an electropop/future bass bent—the duo’s frequent vocal collaborator Emily Warren, and a fabulously orgiastic nightclub scene shot by Ortega* that makes full use of the performance waterfall.  At once vibrant, energetic, and downright prismatic, this one’s a winner.

A light and frothy bit of tongue-in-cheek staging, EYEBALLS features the orbs displaying internally projected eyes, that nervously watch the fin of the Lake’s ersatz shark swim menacingly around them.  Not trying to reinvent the wheel, EYEBALLS is elegant for its simplicity, and cleverly reinterprets the Frankie Valli classic as a metaphor for today’s technology-driven world.

If there’s one act that most fully realizes the combined talents of Messrs. Ortega, Curry, and Woodroofe, this original cover of David Bowie’s 1969 single—itself inspired by Stanley Kubrick’s 2001: A Space Odyssey, and released just days before the Apollo 11 launch—“really makes the grade” (to borrow one of the song’s lyrics). We first see the beautiful space explorer in a spectacular video on the performance waterfall, before she transitions from 2D to 3D emerging as a life-sized space-walking astronaut who flies across the lake until she’s seemingly just over the heads of guests supping on the patios of Lakeside and SW Steakhouse.

The only holdover from the original lineup, FLOWERS was already about as close to multisensory perfection as artistically possible.  That said, it was given an almost bionic refresh by Michael Curry Design and has been reimagined even brighter and more eye-popping.  Classical, non-lyrical, and both aurally and visually stunning, this is the one that, no matter how many times they’ve seen it, gets diners to put their forks down, place their napkins in their laps, and literally face the music.

THE SWIMMER
“Every Little Thing She Does Is Magic” by Sting
Ghost in the Machine, A&M Records, 1981
Symphonicities, Deutsche Gammophon, 2010
Performed by Sting

Imagine if instead of being animated, Disney’s The Little Mermaid had been filmed using motion capture, that it had starred a young Jessica Chastain as Ariel, and that Atlantis had been relocated from the ocean to a lily-pond, and you’d have something akin to THE SWIMMER.  Toe-tappingly upbeat, it’s crazy to think that The Police originally recorded this nearly forty years ago; and Sting’s 2010 solo version definitely brings a classy symphonic twist to this joy-inducing modern classic.

Decades before Janelle Monae and The Black Panther would introduce Afrofuturism to a new generation of cool kids, there was LaBelle—formerly Patti LaBelle and the Bluebelles—the soulful trio of Patti LaBelle, Sarah Dash and Nona Hendryx serving funk in outlandish Space Aged costumes, best known for their foot-stomping, booty-shaking, Allen Toussaint-produced cover of The Eleventh Hour’s disco tribute to a New Orleans street-walker, selected by Toussaint for their Epic Records debut, Nightbirds.  Now, Patti LaBelle’s solo version is making the LADY BIRDS sing and giving audiences something to smile about.  “Gitchi gitchi ya ya, here!”

To be quite frank, this one was a bit too literal and minimalistic for my tastes.  I guess because “Mack the Knife” isn’t about a shark, at all; but rather about the real-life thief Jack Sheppard, whose story was appropriated for the character of Macheath in John Gay’s The Beggar’s Opera (1728); before Macheath was appropriated by Kurt Weill and Bertolt Brecht for their 1928 musical Die Dreigroschenoper; that was in turn translated by Marc Blitzstein into the English version recorded first by Louis Armstrong and later covered by Bobby Darin.  In fact, Weill’s bouncy melody is completely contrary to the lyrics which unfavorably compare Macheath to a shark, and speak to the acts of murder, rape, robbery, and arson that he commits.  That said, Darin was indubitably one of the Strip’s most popular crooners, so the song’s Vegas bona fides are unassailable.  Besides, I suppose it’s nice to turn one’s brain off every now and again, and just watch something pretty.

When it comes to the Great American Songbook, few artists can touch Judy Garland; and even fewer can take one of the songs actually penned for Garland—let alone her signature showstopper, “Over the Rainbow”—and make it their own; but Hawai’ian singer Israel “Iz” Kamakawiwo’ole did just that.  And in just one take, too!***  Yet, where Garland’s original can evoke so-called “ugly crying,” Kamakawiwo’ole’s version is full of wonder, evoking the sun emerging through the clouds after a rain.  No wonder the SINGING FROG ditches his Fedora and cigarette for a flower lei!

[Editor’s Notes: * Based on the fact that the video for THE NIGHTCLUB was shot on an aquatic stage in-the-round (and really, how many of those are there?) I’d wager that Ortega shot it in the Wynn Theater // ** I Shazam-ed a YouTube video of FLOWERS to find out which recording was used for the Lake of Dreams show, and this was what came up; however, I have yet to confirm this with a representative of Wynn Las Vegas // *** As sound engineer Milan Bertosa told NPR’s Morning Edition, “And in walks the largest human being I had seen in my life. Israel was probably like 500 pounds. And the first thing at hand is to find something for him to sit on. Then I put up some microphones, do a quick soundcheck, roll tape, and the first thing he does is 'Somewhere Over the Rainbow.' He played and sang, one take, and it was over."]