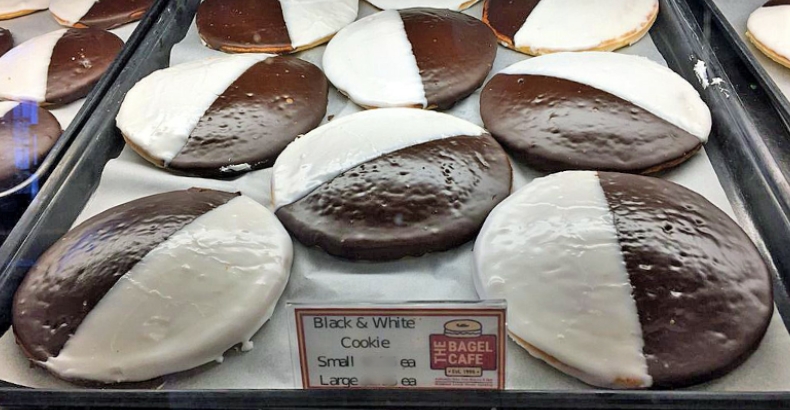 “The thing about eating the Black-and-White Cookie, Elaine, is you want
to get some black and some white in each bite.  Nothing mixes better than
vanilla and chocolate.  And yet still somehow racial harmony eludes us.
If people would only look to the cookie all our problems would be solved.”
Seinfeld, “The Dinner Party” (S5, Ep13)

While it took the ‘90s comedy juggernaut that was Seinfeld to propel the tasty treat into the pop-culture lexicon, what many of us refer to fondly as the Black-and-White Cookie has multiple origin stories (and names), depending on where you purchase your baked goods.

Those in New York City need look no further than the Upper East Side’s Yorkville neighborhood.  That’s where Justine and John Glaser opened Glaser’s Bake Shop, after immigrating from Bavaria; and where the Black-and-White Cookie has been front-and-center since opening day, in 1902.

Folks hailing from Central New York or New England, however, are more familiar with the Half-Moon Cookie, which Hemstrought’s Bakery of Utica is thought to have first baked in 1909 as part of the tricentenary celebration of Henry Hudson’s historic voyage exploring what we now know as the Hudson River; one of the highlights of which was the sailing of an exact replica of Hudson’s trusty ship, De Halve Maen (which, not coincidentally, is Dutch for The Half Moon).

Meanwhile, Germans enjoy eating their Amerikaners—so named as they were brought to Germany by American G.I.s in the 1950s (though seeing as both of the US versions likely originated in or around Germany, maybe it’d be more apropos to say ‘brought back’).  That said, they only use vanilla frosting on the Amerikaner, and the lack of chocolate makes me sad.

But I’m writing this in Las Vegas; and after an exhaustive, decades-long search (seriously), I have circled back to a longtime fave to declare it the absolute best of these delicious delicacies to be found this side of the Mississippi: The Black-and-White Cookie at The Bagel Café.

Though its name would imply being inspired by the New York City version, in actuality The Bagel Café’s owes more to Central New York’s Half-Moon Cookie, in that its base of vanilla cake has a texture akin to that of a sturdy cupcake; while the bottom—the shallow-domed “drop cakes” are actually inverted for frosting—is covered with generously applied frostings of vanilla buttercream and rich chocolate.

According to Savvas Andrews—who, with his wife, Shari, opened The Bagel Café, twenty-five years ago; upon arriving in Las Vegas, after packing-up their three kids and relocating from Long Island, NY—the secret to their Black-and-White Cookies is the freshness; for which Andrews duly credited the bakers, who come in at midnight to ensure that the case is stacked-high (with heaping trays of both the Large and Small versions), when Bagel Café opens, at 7am, each morning.

They’re so good, in fact, that I now find myself with a bit of a Black-and-White Cookie monkey on my back.  Recently, I even developed my own style of enjoying them, in that I will fold a cookie in half, along its axis, with the cake on the outside.  This way, I get both chocolate and vanilla, in each bite.  It’s really, quite decadent.  Now, I wake up in the morning thinking about the next time I might have occasion to bite into that cakey, vanilla-and-chocolatey deliciousness.  [Note to self: Find out from insurance company whether it would be covered were I to check myself into Betty Ford with an addiction to frosted baked goods.]