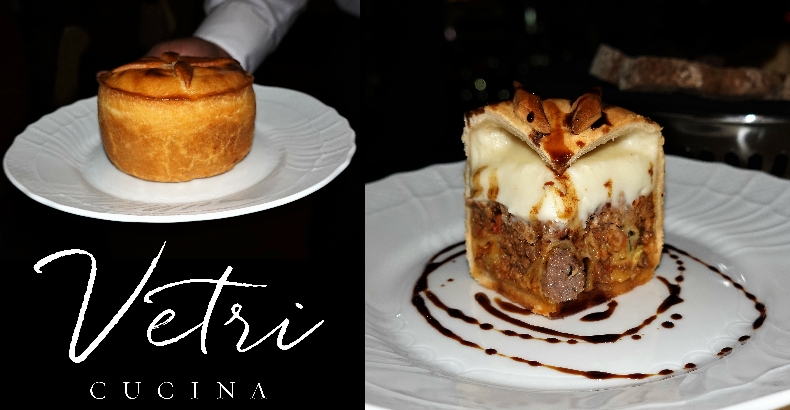 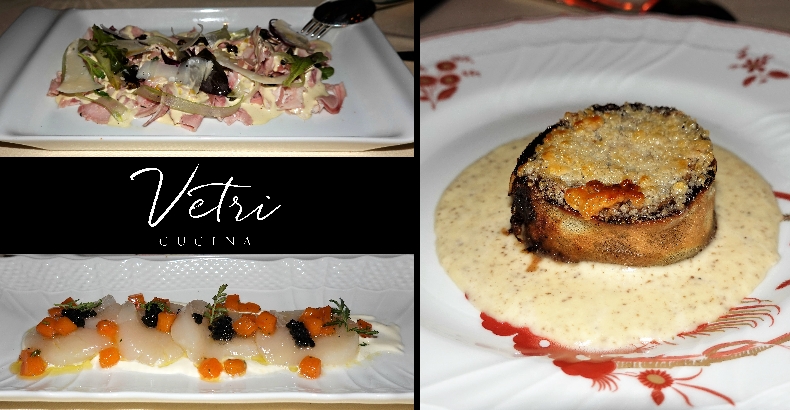 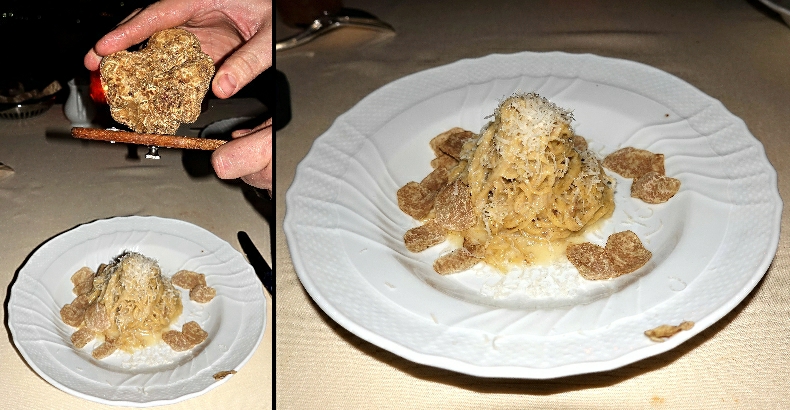 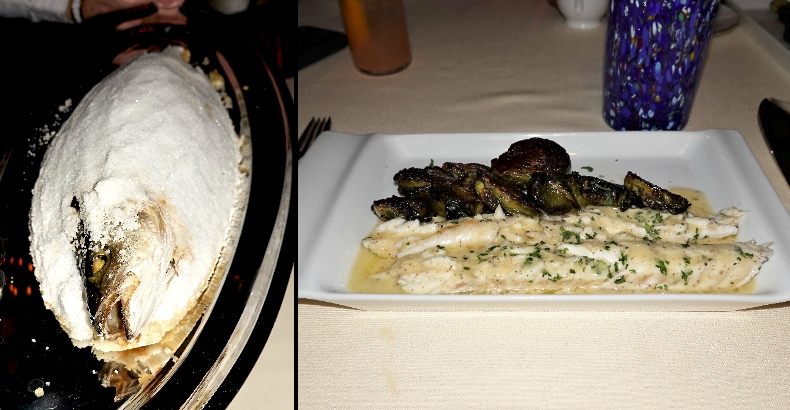 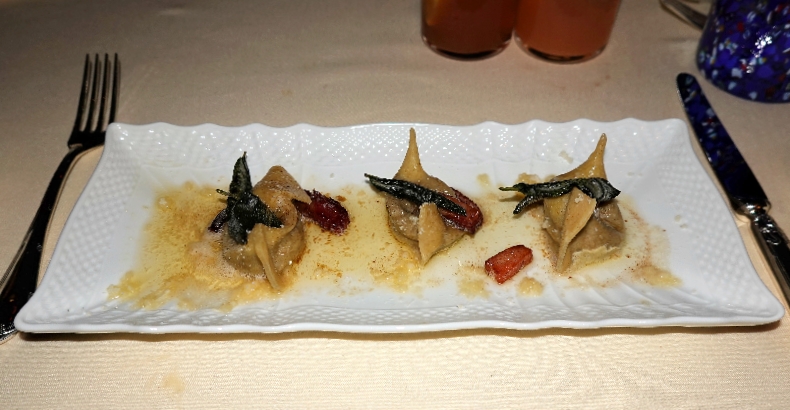 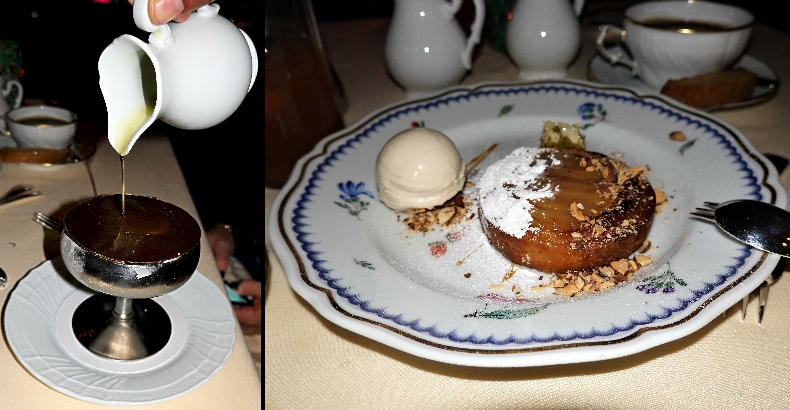 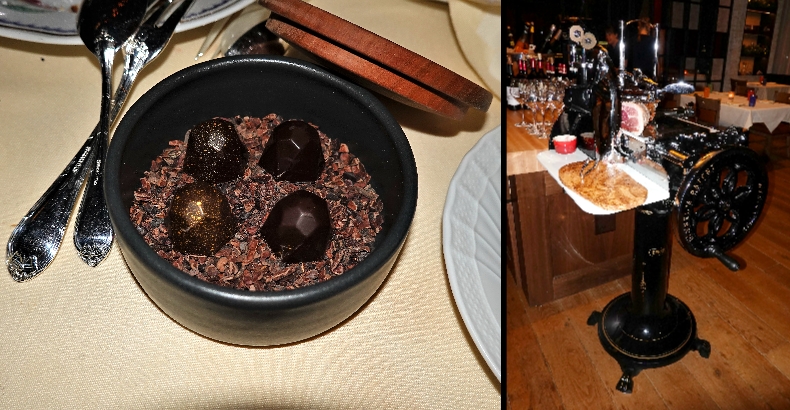 When I said previously that I thought that Chef Marc Vetri’s Vetri Cucina – the Las Vegas outpost of his renowned Philadelphia restaurant of the same name, that’s just opened atop the Ivory Tower at Palms Casino Resort – would be “an elevated epicurean experience,” it was a bit of editorialized optimism (optimistic editorializing?), to be sure.  Luckily for me (not to mention all of you), that’s exactly what it’s turned out to be.

So, my friend Penny and I met by the ivory and gold Christmas tree in Palms’ lobby, and meandered over to Vetri Cucina’s hostess podium, at the base of the Ivory Tower elevators.  There, we checked in and were escorted to the express elevator, that took us up, past the guest floors, past APEX Social Club, and all the way to the 56th floor, to what might best be described as a cross between a converted Tuscan farmhouse and a sleek ski lodge in Cortina.  The flagstone floors in the foyer, vestibule, and hallways further extend the feeling that you’ve just schussed down one of the lower Dolomites and have come to enjoy some après.  There's even a rare Berkel Model 21* flywheel-slicer, in the center of the room; beneath a grand Murano chandelier.  All that’s missing is a roaring fire.

You know what’s not missing?  Some of the fabulous collection of art that’s become an integral part of the reimagined resort’s new narrative.   At Vetri Cucina, this begins with Andy Warhol‘s Flowers (in the vestibule), continues with Damien Hirst’s Veil of the Imagination (in the bar), Timothy Curtis’s 20 Faces, Philadelphia Greatness (in the dining room), and extends to Australian husband-and-wife collaborators DabsMyla’s whimsically cheerful three-story pop-art installation, Tonight – an expansive mural that encompasses the top three flights of the building's stairwell (including walls, ceilings, the undersides of the stairs, etc., thereby earning the moniker "Secret Staircase") that extends from Vetri Cucina down to APEX, and up to the roof.

That view, though!  Vetri Cucina has been designed to fully take advantage of its location.  Set as the Palms is, a mile west of Las Vegas Boulevard, the casinos of the Strip are laid-out in a broad vista that stretches from Downtown to Southern Highlands (give or take).  All the while, the inward-sloping windows add to the sense of intimacy created by the well-spaced tables and amber-hued lights.  All of it combines to create a very warm, inviting ambiance.  But enough about the vibe; let’s get to the meal.

Our server, Shannon, was fantastic (friendly without being overly familiar, charming but not cheesy, offered productive suggestions, polite, etc.), and this certainly added to our enjoyment and helped shape a great meal.  The first thing we saw was Chef Marc’s Tortellini Pie: Think of a personal-sized layered pot-pie, filled with meatballs, tortellini, and bechamel, with some Bolognese, on top.  Shannon had one presented at our table, and as the food-runner took it back to be sliced-up, explained that while not offered on the menu, some are made each day.

Next was a cavalcade of Antipasti, including the Thinly-sliced Porchetta with tuna sauce and celery, the Fish Crudo del Giorno (which was scallops, the night we dined), and the Sweet Onion Crepe with white truffle fondue.  The Porchetta was lighter (i.e. the tuna sauce was less fishy) than I’d have expected, and the textures mixed beautifully; while the scallops in the Crudo were on the large size, and very meaty.  But, as I’d learned at the Vetri X Masso preview dinner (see link, below), the star of the Antipasti was that Sweet Onion Crepe.  As Penny so succinctly explained, “It’s like eating a great French Onion Soup, without having to deal with the soup!”

We had the night’s Pasta Special, next – Tagliolini with Housemade Truffle Butter Sauce, topped with the much sought-after trifola d’Alba Madonna (aka Piedmont white truffles), with the truffles shaved tableside.  Again, I was a bit tentative when taking my first bite (fearing that the dish would be too rich for me) but it was really kinda perfect.  Our other pasta, the Casoncelli alla Bergamasca (ravioli filled with amaretti, sage, and pancetta) had been one of my favorite dishes at the preview dinner and was just as tasty in its intended setting.

As our Secondi, we shared the Salt-crusted Branzino for Two with truffle sauce and charred Brussel sprouts.  The entire fish in its salt-crust was presented to us, tableside, on a silver platter; before being taken back to the kitchen, deboned, and plated with the sauce and sprouts.  The fish was cooked just right, and was less salty than one might expect, after seeing Nemo laid-out under a pound of salt.  This was the dish where Vetri’s comradery with Chef Scott Conant took on a deeper meaning to me when I realized that both chefs are huge fans of butter.  And you know what?  Despite my cardiologist’s arguments to the contrary, butter really does make everything taste better.

Which brings us to dessert.  Penny’s Ricotta Gelato came first, and the presentation was fantastic.  Served in a metal coupe, the gelato comes covered with a hard disk of dark chocolate; over which warm orange olive oil was poured, melting through the chocolate, thereby mixing with the gelato to form a creamy, fruity, savory mélange.  This was followed by my Pear Almond Tart with wild honey gelato.  I took a bite of the tart, and it was good.  Then I tried a bite with the gelato.  Seeing me inhale deeply as my eyes rolled back into my head, Penny took a bite, and exclaimed what I’d been thinking but was too far gone to verbalize… “Holy crap, that’s incredible!”  I mean, sure – sometimes I ignore the à la mode aspects of certain desserts, but in the case of a chef like Vetri, you’ve gotta assume that all of the flavors are deliberate, and part of the intended overall flavor.  So, when I say that at the end of an already memorable meal, we were completely blown-away by gelato, you know it was something special.

Frankly, I hope Vetri opts to sell the Wild Honey Gelato by the pint or quart.  Heck, maybe Palms will open a gelato-stand, along with all the fun amenities coming online in the spring, with Phase II.  Regardless, every stop along the culinary journey we took at Vetri Cucina was one worth relishing.  Yes, this prolongs your meal, and accounts for the pace being a bit less hurried than most; but with this food in this setting, it totally works.

[Editor's Note: Built by Berkel between 1948 and 1956 - but only on the Italian market - this machine went by the name of Berkel Model 21 (though, outside of Italy, it was sold and known as the Berkel Model 8).  They are very rare and highly collectible.]