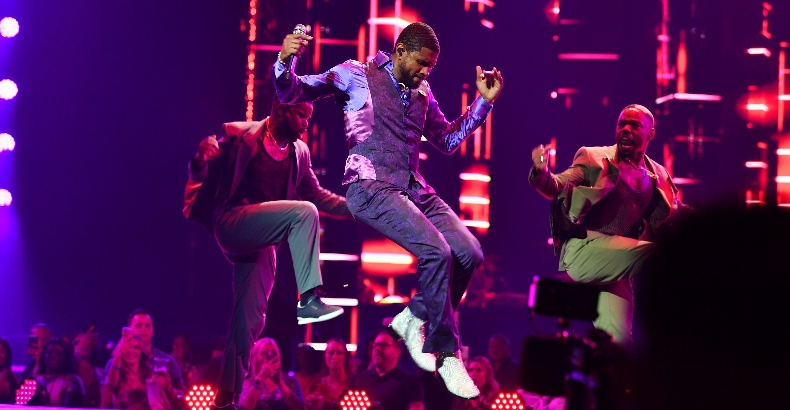 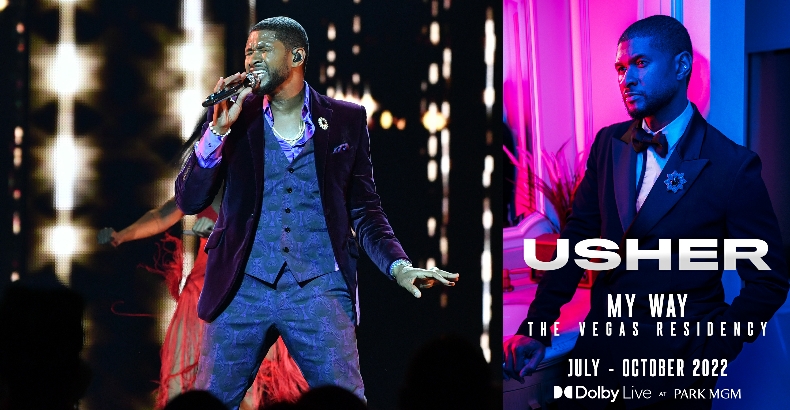 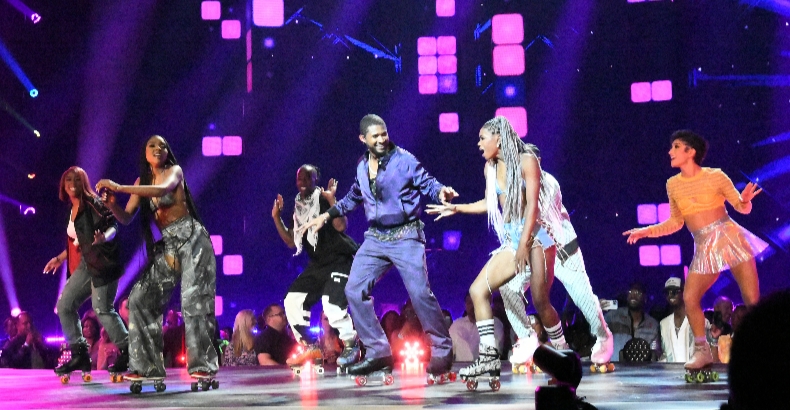 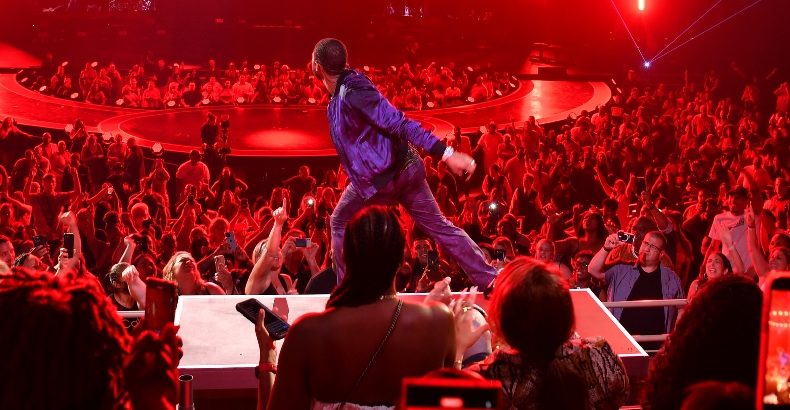 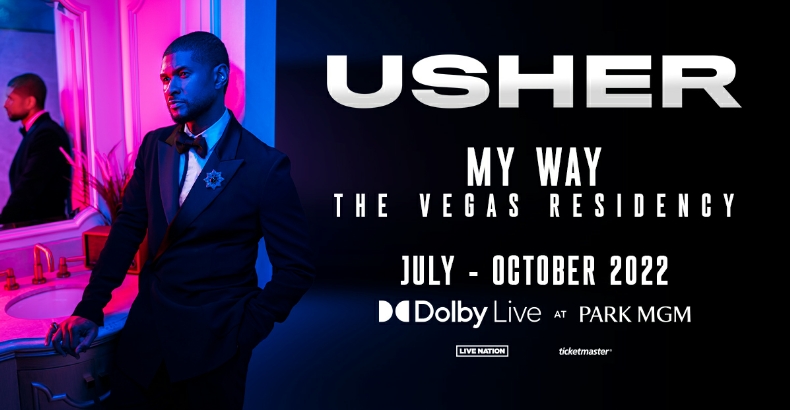 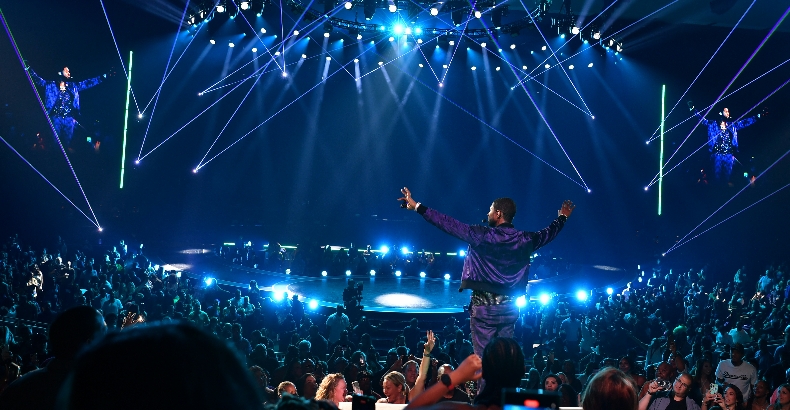 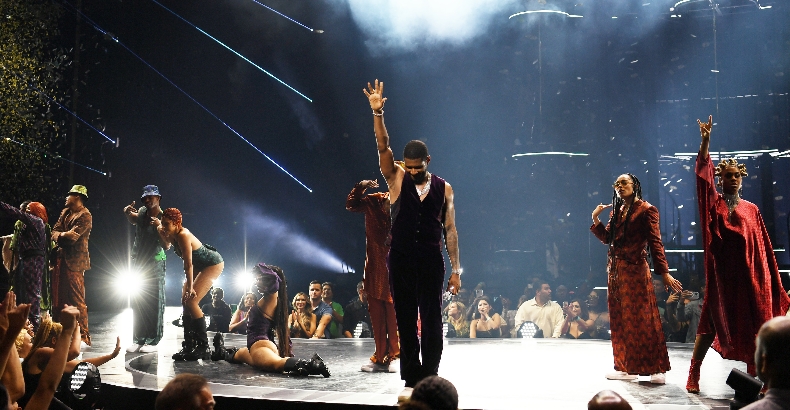 In the nearly 30 years since he first burst into our collective consciousness—“Call Me a Mack” was released in 1993 on Music from the Motion Picture POETIC JUSTICE and as a single—we’ve watched Usher Raymond IV evolve into the golden-throated, stage-sliding, fedora-flipping, award-winning mono-monikered entertainer he is today: An artist who has just unveiled his second blockbuster Live Nation Las Vegas-presented residency show.

USHER: My Way, The Las Vegas Residency is, for all intents and purposes, a greatest hits compendium—as the best Las Vegas residencies tend to be—and takes audiences on a four-act journey through more than thirty of his most beloved songs, as well as one yet-to-be-released single.  And there’s a lot of ground to cover from the talented artist who has been listed in the Guinness World Records for the past dozen years under the category of “Most R&B No.1s in the US” (you’d better recognize!).  Further, in addition to his 8 GRAMMY Awards, 18 Billboard Music Awards, 9 Soul Train Music Awards, and 8 American Music Awards; Usher has two Platinum-certified albums, two multi-Platinum-certified albums, and a Diamond-certified album from the Recording Industry Association of America, accounting for the 100 million records he’s sold, worldwide.  What’s more, of his 18 Top 10 hits, nine have gone to #1, spending a cumulative 47 weeks at the top of the charts, which is more than any other male recording artist in history.

So, you’re probably wondering what he sings in his show.  An easier query might be what doesn’t he sing!  “My Way,” “I Don’t Know,” and “Caught Up?”  Yes.  “U Don’t Have to Call,” “Forever Young,” and “Superstar?”  Not only yes, but on roller skates, no less!  “Seduction,” “Bad Girl,” and “Good Kisser?”  Mmhmm…  (While making it rain with UshBucks, in a two-story ersatz strip club, mind you.) “Downtime,” “U Remind Me,” and “U Make Me Wanna?”  You’d better believe it!  And as if that’s not enough to dazzle the audience (which was eating out of the palm of his hand, from the get) he performed “Nice and Slow,” “Climax,” and “Bad Habits” while popping, blocking, and grooving on top of a hydraulic cylinder that rose high over the audience, with a mic-stand as his only prop.

And as is the way with many contemporary artists, many of Usher’s biggest hits were recorded with guest artists or as duets, and in some cases were songs by other artists on which Usher appeared as a featured artist.  So, in addition to the singles that Usher recorded with Young Jeezy (“Love in this Club”), Nicki Minaj (“Lil Freak”), Juicy J (“I Don’t Mind”), Jadakiss (“Throwback), will.i.am (“OMG”), Pitbull (“DJ Got Us Fallin’ in Love”) and Lil Jon and Ludacris (“Lovers and Friends” and “Yeah”), as well as his duet with Alicia Keyes ("My Boo"); he also performs Chris Brown’s “Party” (on which Usher appeared with Gucci Mane), Summer Walker’s “Come Thru,” and David Guetta’s “Without You.”

It's no secret that Usher—one of the few artists who can not only simultaneously sing and dance but who does both flawlessly, missing nary a step nor a note—has drawn much of his inspiration from Michael Jackson (both the pop sensibility and the choreography); but what I really appreciate are the nods he makes to the legacies of Prince (funk), James Brown (owning every inch of the stage), Luther Vandross (slow jams) and Marvin Gaye (falsetto).  Meanwhile, it’s the seemingly effortless melding of genres that he mixes with R&B, whether pop, hip hop, rap, krunk, or EDM, that makes Usher’s music so accessible to a wide range of audiences and radio formats, alike. *

So, maybe you caught his residency at Caesars Palace, last year; or you’re a fan from the ATL.  Or perhaps you’ve never even seen Usher live but watched him slay his epic Tiny Desk concert for NPR Music, last month.  No matter what your history with the artist dubbed “Urshr,” by Ludacris, if you’re looking to enjoy a couple hours of nonstop movin’ and groovin’ from one of the only entertainers under 45 who I feel has earned the right to be referred to as a “legend,” then dear reader, USHER: My Way, The Las Vegas Residency is for you.

Get into it!
#Usher

[Editor’s Notes: * Yes, Marvin Gaye.  Much as I’d love to think that Usher developed his falsetto while listening to the Hi-NRG disco stylings of Sylvester, I’m gonna go out on a limb and assume that rather, it was from hearing the brilliantly soulful Marvin Gaye; because I’m quite sure Usher wasn’t getting down to The Bee-Gees, Frankie Valli, Klaus Nomi, or Tiny Tim (though I could be mistaken)!]