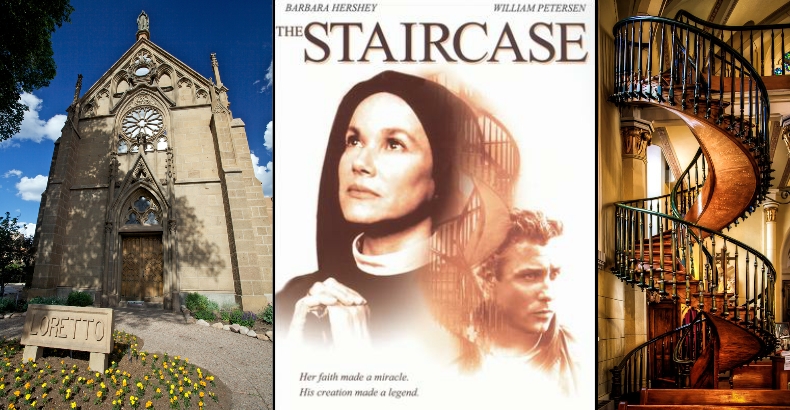 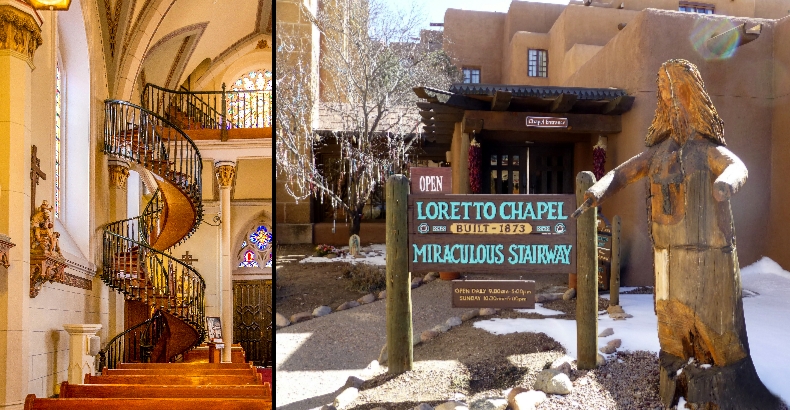 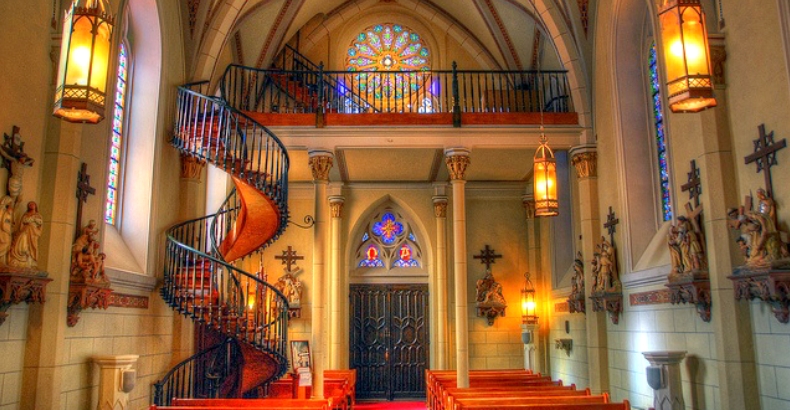 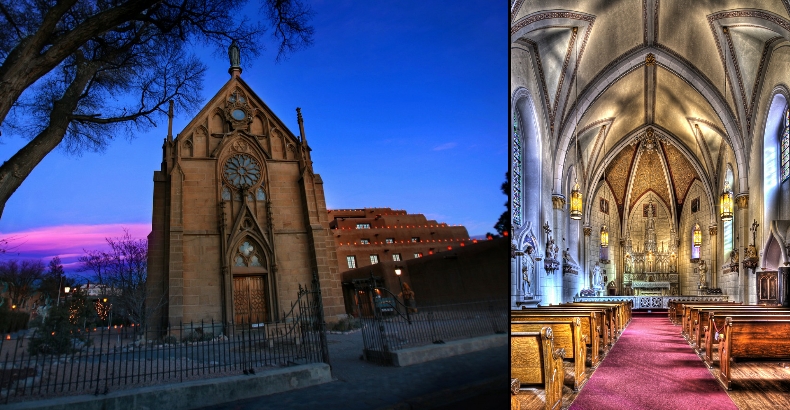 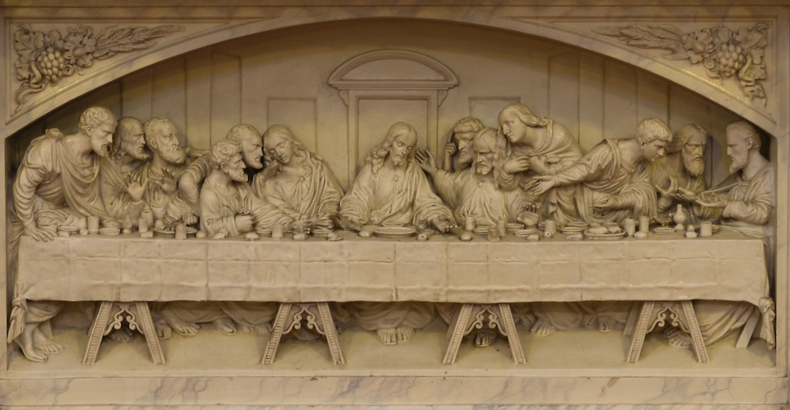 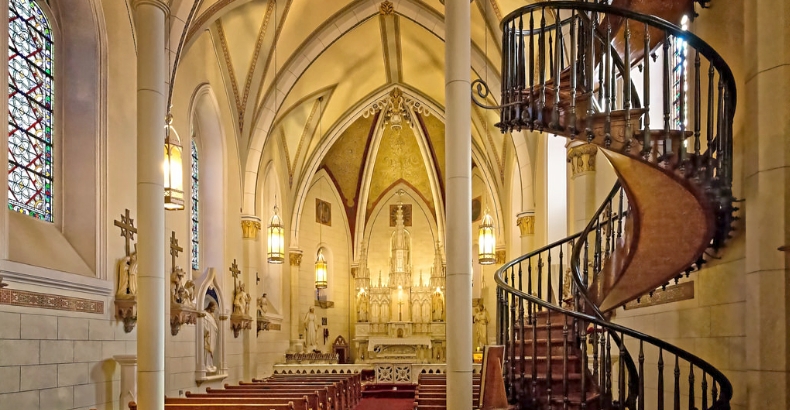 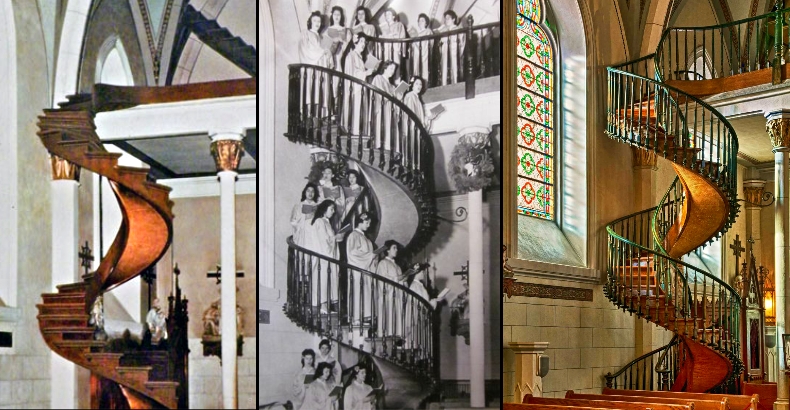 I’ve been fortunate (thanks in large part to parents whose wanderlust is seemingly unquenchable) to have travelled extensively, all over the world.  But until recently, I’d never been to Santa Fe, NM.  Sure, I had a grasp of the basics – coyotes, chilies, turquoise, and Georgia O’Keefe (whose 1932 painting, Jimson Weed, was sold in 2014 for $44.4 million, making it the most expensive painting by a female artist ever to be sold at auction) – but there’s so much more to this spicy gem.

I’ve discussed the incredible food and art of Santa Fe, in previous essays; so herein (now that my taste-buds have fully recovered), I’m gonna tell y’all about Santa Fe’s spectacular Loretto Chapel, and the “Miraculous Staircase” for which it is renowned.  Now, this might come as no surprise to many of you, but I’m a longtime viewer of the Lifetime Network; and it was on Lifetime, in the late ‘90s – no doubt between marathons of The Golden Girls and Designing Women – that I saw the made-for-television movie The Staircase, starring Barbara Hershey (Beaches), William Petersen (CSI: Crime Scene Investigation), and Diane Ladd (Alice Doesn’t Live Here Anymore).  Unfortunately, I remember very little about the film; other than thinking it was a little far-fetched.

So, color me so surprised, when I found out that I’d be attending a wedding in the actual chapel upon which the film was based!  And how I managed to miss the myriad segments about the Loretto Chapel and its staircase – on such shows as Unsolved Mysteries, Ripley’s Believe It Or Not, Good Morning America; as well as specials on the Travel Channel, Discovery and NatGeo – I’ll never know; but being there, in person, was pretty cool.

Here’s the skinny…  In the 1850s, the Sisters of Loretto travelled from Kentucky to Santa Fe, and upon arrival, commissioned the building of the Loretto Chapel – the first church west of the Mississippi to be built in the Gothic-Revival style (taking as its model Paris’ Sainte Chapelle, built for Louis IX).  Once construction had been completed (1878) the nuns realized that there was no way for them to access their choir-loft, more than 20 feet above.  Unfortunately, every carpenter that came to assess the situation, left with the same conclusion: any staircase would take-up too much room, and therefore the only way to and from the choir-loft would have to be via ladder.

Now, stop and think about this, for a moment.  First, imagine having to climb a ladder that stretches more than twenty feet, multiple times each day.  Now, think about doing this, dressed in a nun’s habit!  Needless to say, the good sisters did; and upon so doing, the sister did what they did best: They prayed.  They made a novena to Saint Joseph (patron saint of carpenters), and – according to legend – on the ninth and final day, their prayers were answered, in the form of a man, who showed-up with a donkey and some tools, looking for work.  Praise the Lord, and pass the hammer!

The mysterious stranger offered to solve the sisters’ dilemma, on the condition that he be left alone, in the chapel, for three months.  Then, with only the most basic of tools – a T-square, a saw, and a hammer – he built the helix-shaped staircase – comprising of two full 360-degree turns, with no central pole (for support), and with no nails, only wooden pegs.  And then, as mysteriously as he arrived, he disappeared; without ever giving his name or asking for payment.

The sisters went so far as to place ads in the paper, but to no avail.  Not only did they never find out who he was; they never found out where he’d obtained the wood, nor did anyone see it brought in.

As the staircase was originally built without the railing (added for safety, a decade later), it really looked like the proverbial stairway to heaven.  Furthermore, architects and engineers have been baffled about the structure, saying that it should have crumbled the first time someone alighted them.  Furthermore, experts say that while it’d be impressive if built today; considering that it was built with only the most rudimentary of tools, and without electricity, it’s incredible.

Is it a miracle?  That’s a matter of faith.  And while the staircase is a marvel of engineering to be sure; it is but one of many gorgeous features in a breathtaking structure that also contains a marble fresco depicting Da Vinci’s Last Supper in bas-relief, a jaw-dropping Gothic altar, stained-glass windows from Paris’ DuBois Studio, and alcoves featuring sculptures that depict the Stations of the Cross.  And while I’m not a big fan of organized religion, per se; I delight in the architecture and art that would never have come to be without it.