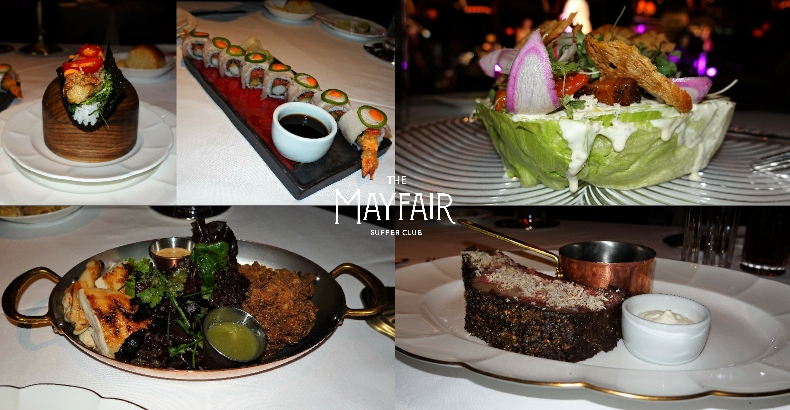 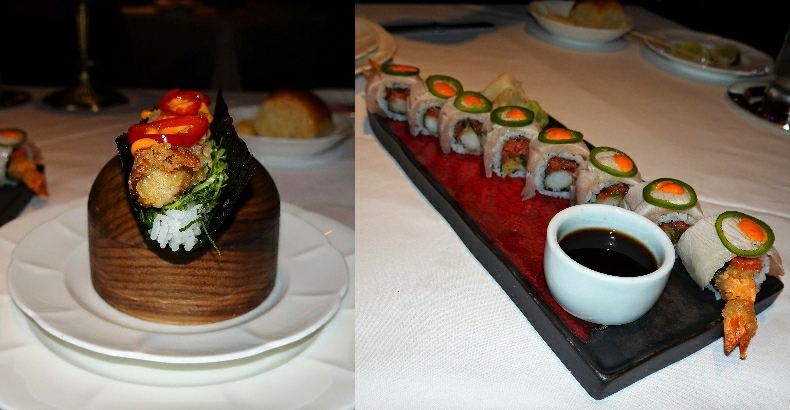 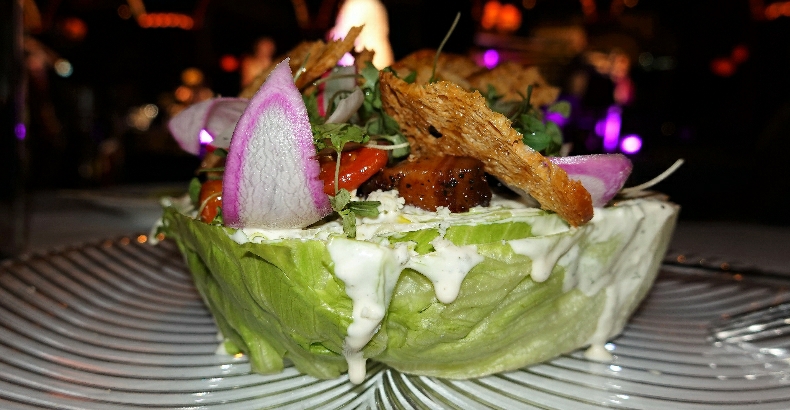 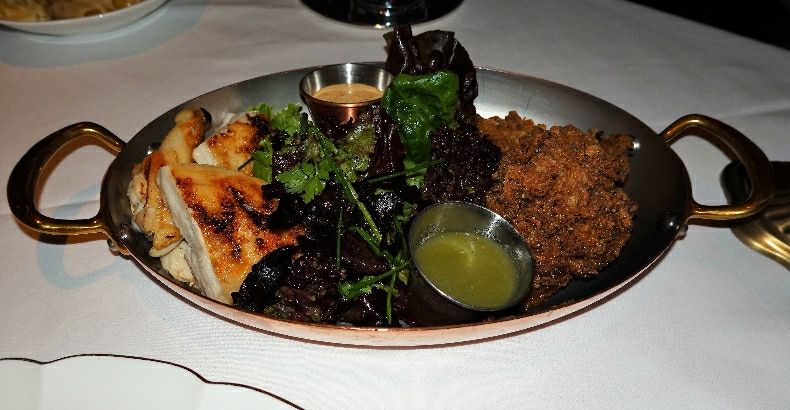 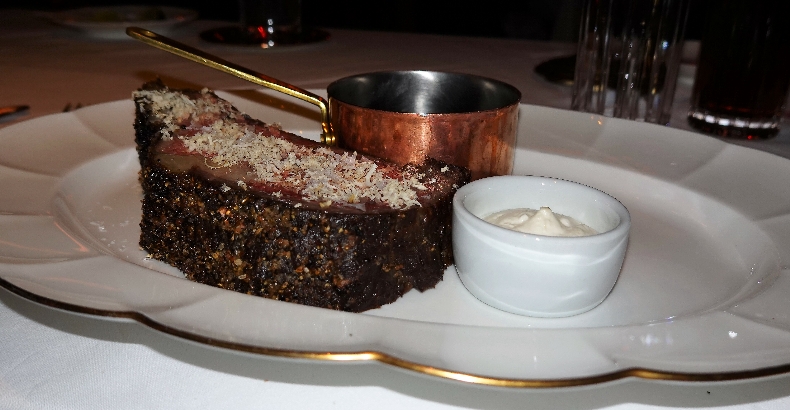 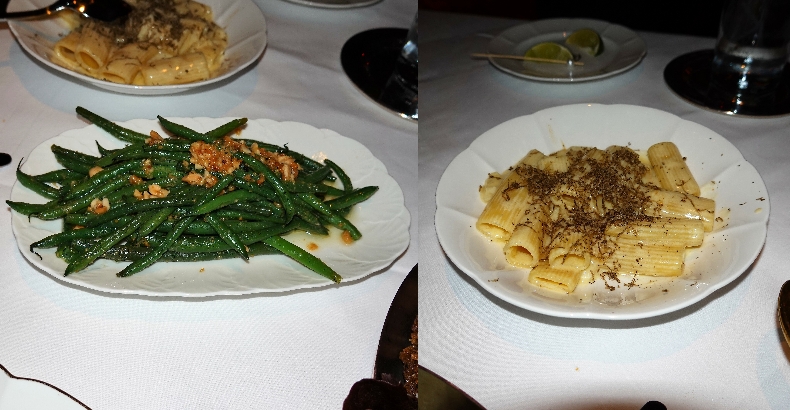 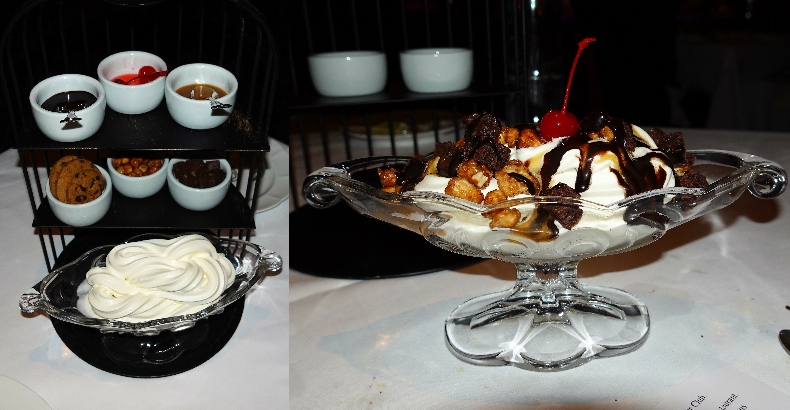 As the coronavirus pandemic continues to restrict entertainment offerings, The Mayfair Supper Club at Bellagio has emerged as an upscale option for those seeking to enjoy dinner-and-a-show.  And while the singing and dancing might be more newsworthy, to my mind the best show was the one coming from the kitchen and presented on the plates served at our table.

After a long, leisurely, and at all times scrumptious meal—one that required so many to-go containers that I returned to my car lugging two shopping bags of leftovers that turned into a week’s worth of sandwiches and late-night trips to the refrigerator—I had to find out what went into the deliciousness at Mayfair, and was lucky to have been put in touch with Wesley Holton (Executive Chef, Bellagio and Park MGM), who answered my queries, allowing me to share some insight into what we’d eaten.

Our meal commenced with some sushi.  Chef Wes explained it as a culinary mashup inspired by the classics; a juxtaposition of the venue’s Enchantment Under the Sea-vibe and the live entertainment, and a bill fit nicely by sushi.  We began with the Lobster Club Handroll, in which Maine lobster is wrapped in a shiso leaf and bacon, before being tempura fried.  The wrapped and fried lobster is placed on a bed of sushi rice and then topped with pickled Fresno chilis and a chili aioli.  Think of it as the sushi version of a Lobster BLT.  Simultaneously, we were presented with The Mayfair Roll, a cut roll featuring shrimp tempura surrounded by spicy tuna tartar, around which seasoned sushi rice is added, before being topped with sliced Hamachi, spicy mayonnaise, and slices of jalapeño.  The roll is then torched (under ‘normal’ circumstances, this would be flambéed, tableside), and served with a side of ponzu.

Rounding out our starters was The Wedge, but this isn’t your run-of-the-mill wedge of iceberg lettuce with some bleu cheese ladled on top.  Instead, as Chef Wes tells it, when you cut the lettuce into a non-wedge formation (such as the ‘slice’ they serve at Mayfair), it not only lets one see the many layers of the lettuce but allows for more consistent distribution of the dressing as it will seep into all of the pockets.  Talk about modern culinary science at its finest!  Olive oil and lime juice are used to pre-season the slice of lettuce, giving it a pop of acidity before Mayfair’s house-made buttermilk dressing is poured over it.  The dressing-covered slice is then topped with candied bacon, some demi-sec tomatoes (peeled and halved cherry tomatoes that are tossed with olive oil, garlic, and some aromatics and then dried out in the oven, resulting in little raisin-like bites of tomato), an array of shaved radishes, and croutons that have been baked and seasoned with olive oil, garlic, and thyme.  A lemon balm and Thai basil account for the salad’s lingering floral notes.  As you can see from the picture, even something as seemingly innocuous as an iceberg wedge can be elevated in the hands of an experienced chef.

Then came the entrées.  Mary’s Organic Chicken—a chicken served two-ways—takes its name from the variety of organic heirloom chicken raised at Pitman Farms (a third-generation farm in California that raises its chickens with outdoor access on a strict vegetarian non-GMO diet).  As mentioned, this is a fun and tasty spin on chicken served two-ways, with the breast being brined and grilled, and the dark meat being soaked in buttermilk and fried.  It is served with a sauce gribiche (a mayonnaise-based cold egg sauce akin to a remoulade or tartare sauce with pickled vegetables and “a ton of fresh herbs”) and a shishito hot sauce, both of which add some zest to these already tasty preparations.

The Prime Rib is one of Mayfair’s most popular entrées and starts with the highly-marbled and flavorful beef known as Mishima Wagyu (born and raised in the U.S. from Japanese-heritage full-blood Kuroge Washu bulls cross-bred with American cows) that is marinated overnight in spices and then slow-roasted for 6-7 hours to ensure the perfect temperature throughout the meat.  As for the crust, Chef Wes explained that they took as their inspiration Montreal Steak Seasoning (the pickling dry-rub mix first used in the 1940s at Schwartz’s in Montreal to prepare smoked meats à la Romanian Jewish cuisine).  Mayfair’s proprietary blend contains salt, black pepper, coriander, garlic, and “a bit of cumin” all of which account for little bursts of spice that vary the flavor from one bite to the next, as well as the more coarse texture of the crust.

Our entrées were accompanied by a pair of side dishes.  There was the Green Beans Amandine, haricots verts that are blanched in seasoned water and, on the pick-up, are sautéed with brown butter, Marcano almonds (sweet, moist, buttery almonds from Spain), a shot of lemon juice, and some parsley.  How they managed to avoid being soggy (even after a night in my refrigerator) is a further testament to the skill of Mayfair’s culinary team.   The Truffle Pasta, meanwhile, was a rich and decadent affair consisting of rigatoni in a truffle cream sauce, served with fresh truffle grated over the top.  Why rigatoni?  Because the ridged, tubular pasta “really grabs and holds onto the sauce.”

Concluding our indulgent evening, Dawn chose the Black Forest Cake (a layered confection of light and dark chocolate mousses with cherries), while I opted for the Soft-Serve Sundae.  The latter of these was brought to our table as a bowl of vanilla soft-serve ice cream and a portable birdcage-shaped caddy containing ramequins of hot fudge, hot caramel, cherries, brownie bites, chocolate chip cookies, and candied peanuts, that—once I got my grubby mitts on it—transitioned into a fabulously gooey and ambrosian ice cream sundae.

The over-arching direction for the food at Mayfair, as Chef Wes explained it to me, involves buying the best food possible and neither overmanipulating nor masking it—whatever it is, this piece of meat, that piece of fish—letting it be the best it can be.  Thus, Mayfair’s culinary team goes out of its way not to over-manicure the food, preferring instead to let the solid, fundamental techniques behind the preparation of each dish stand out.  And to my mind, it totally works.