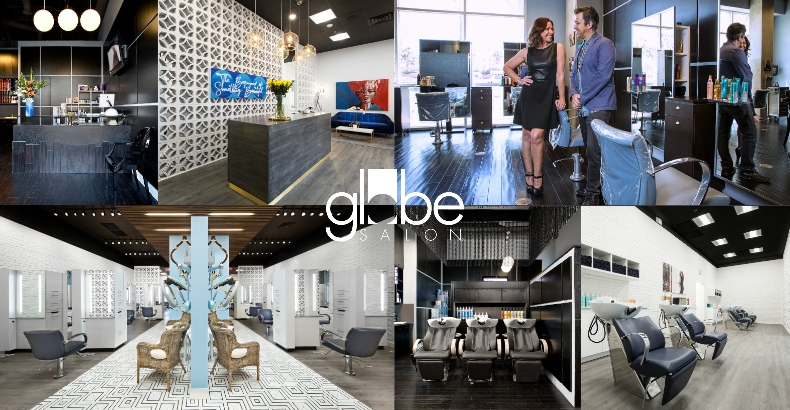 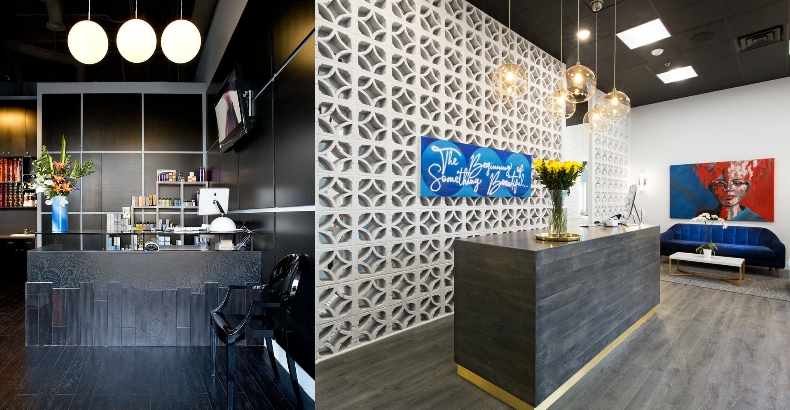 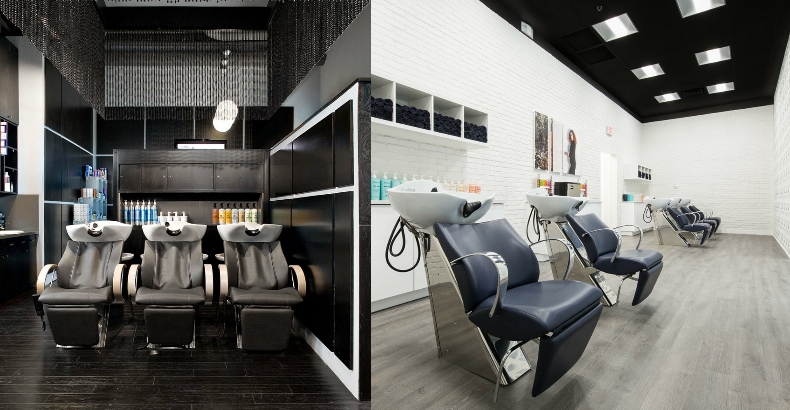 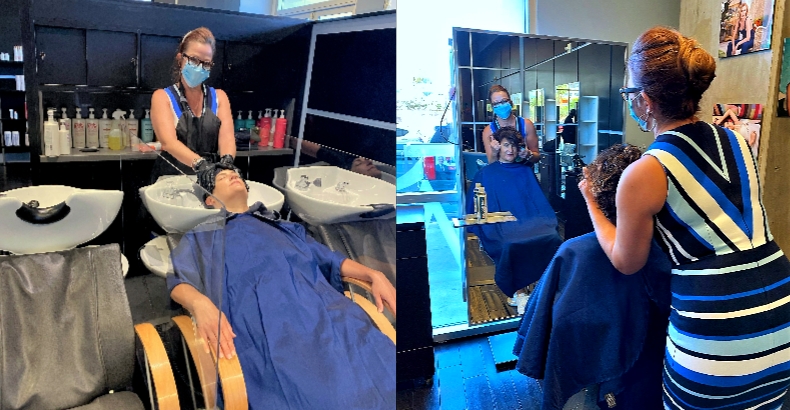 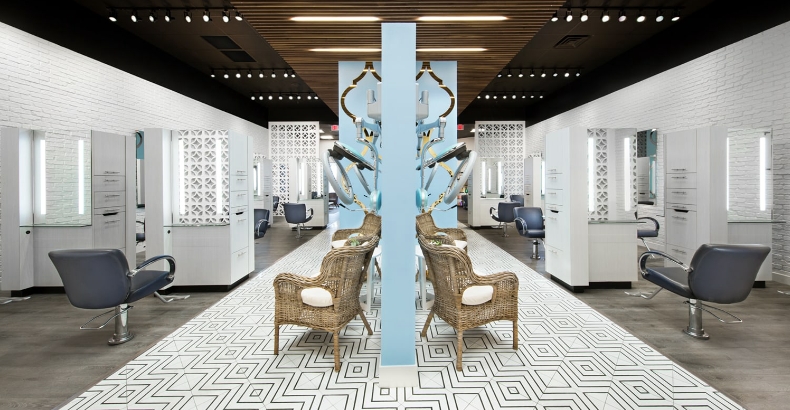 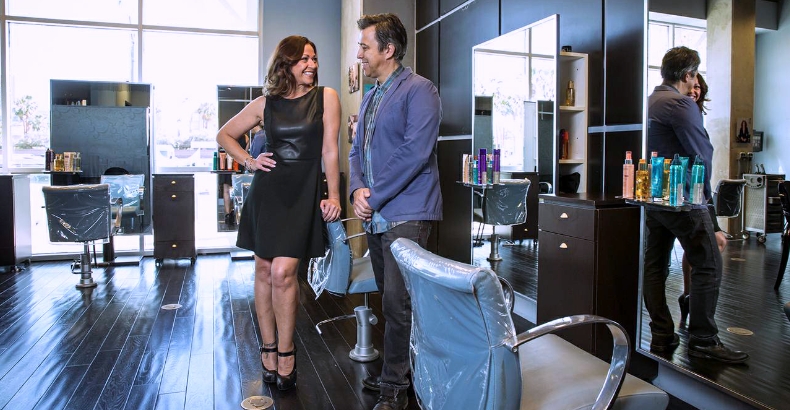 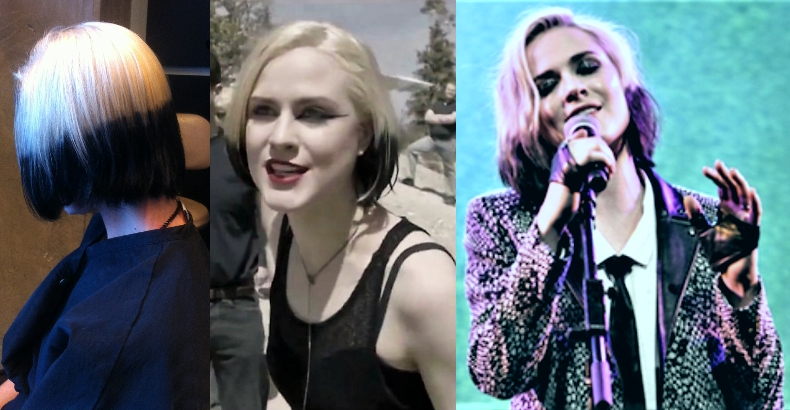 Tell me about Globe Salon's accreditation in ELLE.

We honestly don’t know how it happened.  It was all very low key.  One day, a guest said, “I saw you in Elle!  Congrats!”  We had no idea what she was talking about, so we looked into it and found that Globe had been named to their “Top 100 Salons in America” list. There was no fanfare from Elle, no attempt to sell anything, no reach-out to get information.  Nothing. Maybe it was a secret shopper, maybe it was expert recommendations, we just don’t know. We just appeared on the list, twice. It all felt objective and legit, so we shamelessly wear it as a badge of honor.

What are some of the most exciting highlights of your career?  [Highlights…  Get it?  I’m so clever!]

Ha! I’ve had some wonderful experiences as a hairstylist. I styled Kate Pierson (The B 52’s) for a concert.  That was a pretty awesome experience for me as a relatively new stylist at that time—being behind the big stage at the MGM Grand Garden Arena and feeling so cool with my backstage badge.

I also was the stylist for Evan Rachel Wood and Jeremy Allen White on the Gerardo Naranjo-written and directed film, Viena and the Fantomes [being released by Universal Pictures on-demand and on digital platforms on June 30, 2020]; so, I got to work with them multiple times over the course of the shoot.  I also love doing editorial work and have worked on many local magazine covers and spreads, most recently for Vegas’ most recent “Vegas Gives” issue.

That said, what I love most is being behind the chair, taking care of my guests.  Many of them are executives, entrepreneurs, or performers, and it’s very refreshing to interact with them when they are relaxed: I learn so much from them!  And mentoring my assistants is a wonderful part of my job.  Watching them blossom into creative and confident hairdressers is fabulous and rewarding.

Is “ombré” just a cop-out for people too lazy to get their roots done?

Ombré emerged during the recession as a real-life result of guests being unable to get their hair done as often, so eventually, the roots started coming in. It became a “trend” that has stuck around longer than I thought it would, but now we have professionally tweaked looks, like the Smudgy Root.  Some people can pull it off well, especially when their hairdresser creates the look properly; but other times, roots are passed off as intentional when they clearly aren’t.

What’s the most misunderstood thing about hair salons?

People tend to believe everyone is an independent stylist, that every stylist runs late, and that nobody is really in charge or accountable.  That is really only a product of the past 10 years, as social media decentralized our industry, leaving many salons without a vision or if they have one, the ability to execute it.  But there are still some really great salons where people care and you’ll be treated well by everyone.  That is the salon experience of the past; and the future, as far as Globe Salon is concerned.

What are your three favorite things about Globe Salon?

Having guests be a part of our extended families, giving my team the tools to grow as stylists and people and then watching them do it, and working in these wonderful spaces that I had a part in executing. It’s a cliché to say “living the dream,” because every entrepreneur knows the flip-side is “living the nightmare;” so, you have to stay focused on the rewards.

Is there a signature Globe Salon experience?

We focus exclusively on hair, so our signature experience happens at the shampoo bowl. Downtown has some amazing Shiatsu massaging chairs that elevate the guest and relax them. While those were no longer available when we built the Uptown salon, we do have a shampoo lounge that is somewhat separate from the main salon, and the chairs do elevate. At both locations, we spend time at the shampoo bowl with an amazing head massage that helps you forget your stresses and relax before your service. Then, we finish it with a steamed aromatherapy towel, or a chilled towel (if the guest prefers) in summer.

What is the most bizarre request you’ve ever had?  Were you able/willing to do it?  Did it work?

I have a longtime guest who works in the convention industry who used to host an amazing Halloween party at his house every year. He has longish, greying hair, a very “I’m a cool, creative guy” look. His Halloween party was a huge deal, and everyone went above and beyond with their costumes. One year, his 20-something son decided he wanted to be his dad for Halloween, so he grew out his hair, and the day of Halloween, I cut it into his dad’s cut, and we turned it gray. It was amazing how much they looked alike!

While it wasn’t bizarre, per se, my work for Evan Rachel Wood was a true challenge. I was tasked with creating an “‘80s music-scene” look for her, in that movie; so, we decided on a two-toned black-and-blonde dip-dye on an asymmetrical bob.  Virgo that I am, I literally had my ruler out, when I was determining how the dividing line would taper!  It was worth it though, because a few weeks later when she showed up to perform at the Los Angeles Gay & Lesbian Center’s An Evening With Women benefit, she was still rocking the look, and it caught the attention of US Weekly.  Then, all of a sudden, dip-dye was a thing!

Globe Salon has evolved into the living embodiment of its slogan, “Uptown Sophistication, Downtown Style.”  Was this intentional or just a delightful coincidence?   A case of Life imitating Art, perhaps (or maybe the other way around)?

Our slogan—Uptown Sophistication, Downtown Style—was developed very early on, maybe the first year we were open. It was our way of communicating to guests (and stylists) what they could expect from our salon, to let people know we had actually executed a vision for our business and not just put in some equipment, some floors and some lights and turned it loose.

As the salon’s reputation grew, the slogan became a hallmark of our brand and our vibe. Opening the new location really made it seem like we had written a phrase on a vision board and it happened.  It’s nice to see how that slogan has carried us through for so long.

What is the best thing people can do for their hair outside of the salon?

The basics remain the same: Always use professional care products based on a stylist’s recommendation.  Learn how to use your heat tools properly (most people set them too hot and use them on the hair for too long).  Protect your hair from heat (with a recommended heat protectant) and chlorine (always rinse after using the pool).  Develop an in-shower ritual for using your shampoo, conditioner, and masques.  Don’t use rubber bands or anything on your hair that pulls or breaks it.  And remember: No matter how long you’d like to grow it out, always get regular trims to manage split ends.

Right now, we are focused on resetting the salons after the shutdown.  We were able to re-open under the current guidelines and protocols, on May 09, and have to maintain that focus for now. As we move forward, we have a few things we’d like to do (for instance, my apprentice training classes need a growth platform).  We also would love to engage in some management opportunities for existing salons, helping to execute the Globe Salon experience in various places around the world.  But right now, we remain focused on keeping our salons the safest possible environments, while continuing to provide the exceptional service and quality that's kept our clients coming back for twenty years.