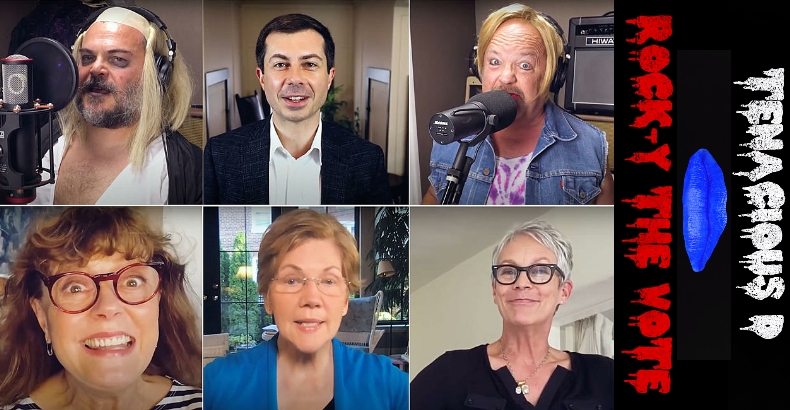 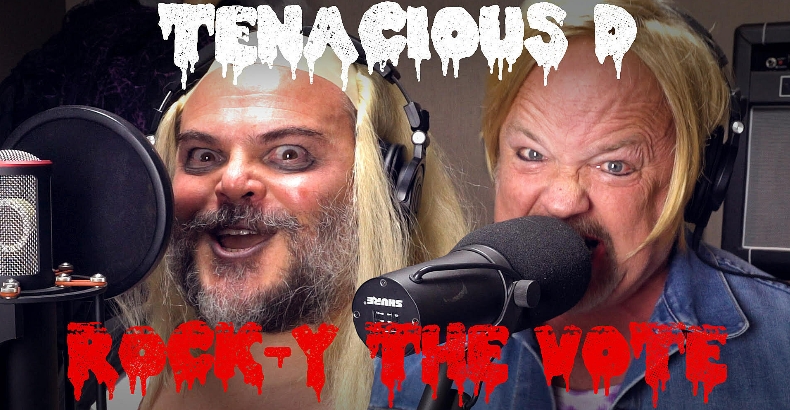 It’s astounding.  Time is fleeting.  The 2020 election is here, and it’s Time to ROCK-Y THE VOTE!
And remember: It’s just a jump to the LEFT and not a step to the right!
―Tenacious D

Tenacious D—the Grammy-winning comedic rock duo of Jack Black (lead vocals, rhythm guitar) and Kyle Gass (lead guitar, backing vocals)—had planned to encourage voter turnout for next month’s election by staging their Purple Nurple Tour: Twisting Hard to the LEFT through swing states, this fall; but the tour (like virtually everything else, this year) had to be shelved due to the continued COVID-19 pandemic.

But never count out the D: They are the self-described “Greatest Band in the World,” after all.  Since they couldn’t tour in person, and given the proximity to Halloween, they opted instead to record a rockin’ cover of everyone’s favorite Transylvanian dance craze—the “Time Warp” from The Rocky Horror Picture Show (1975)—and invited a bunch of their famous friends to join in on the fun and help them promote Rock the Vote.

Black takes on the parts of Riff-Raff, Magenta, and Columbia (portrayed in the film by Richard O’Brien, Patricia Quinn, and “Little” Nell Campbell, respectively) while camping it up in too-small variations on those characters’ costumes, while Gass takes on the backing vocals, as well as Columbia’s solo (sans tap dancing).

And who will you see in the video, voicing such instruction as “Put your hands on your hips” and “It’s just a jump to the LEFT” in Tenacious D’s cover of the “Time Warp”?   The list of actors, comedians, musicians, and politicians who get in on the fun include Eric Andre, Phoebe Bridgers, Mayor Pete Buttigieg, Jamie Lee Curtis, Ilana Glazer, John Heilemann, King Princess, Ezra Miller, Karen O, Peaches, Michael Peña, George Takei, Senator Elizabeth Warren, John Waters, Reggie Watts, and Susan Sarandon (who played the female lead, Janet Weiss, in the 1975 film).

So, watch the video, check-out Rock the Vote, and if you haven’t already done so, VOTE!!

Get into it!
#VOTE