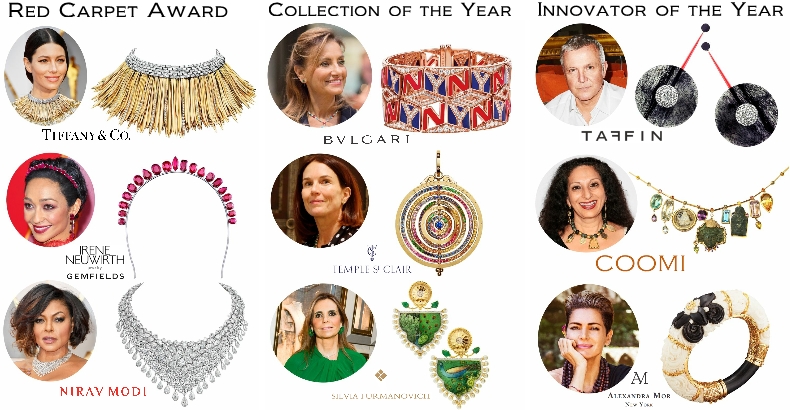 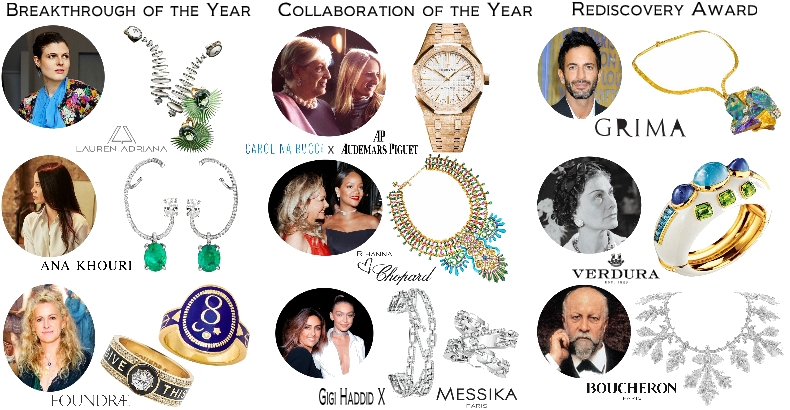 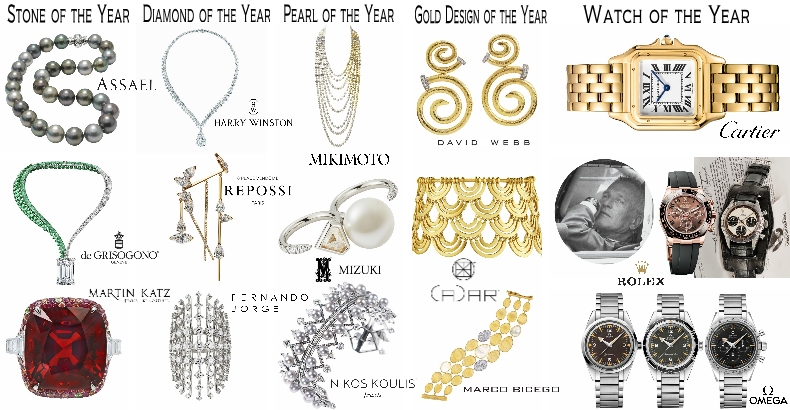 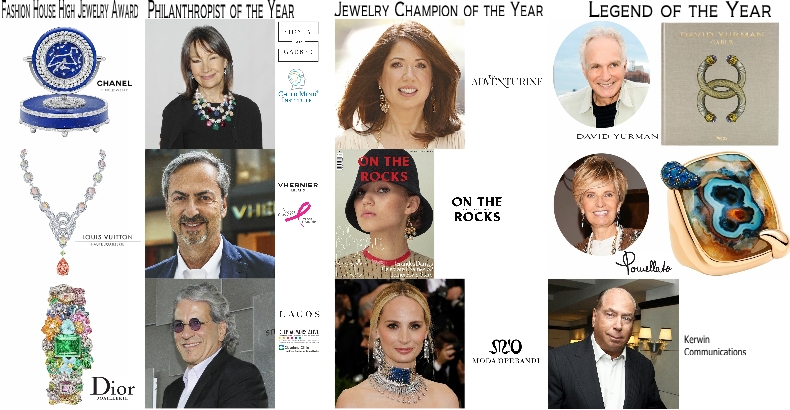 On the rare occasion that I present the words of others, in lieu of my own, you can be sure that the others in question are individuals I hold in especially high regard, as experts in their field.  Also, it’s highly likely that they possess views similar to my own.*

When it comes to jewelry, there are few teams I find more knowledgeable than Town & Country’s EIC, Stellene Volandes and her trusted Fashion Market & Accessories Director, Will Kahn.  Simply put, they are the bee’s knees of jewelry editorial; and have my profound respect.

So, without further ado – here are the winners of the 2018 T&C Jewelry Awards (Text and Images, Town & Country).

TIFFANY & CO. - The one-of-a-kind necklace from the Blue Book Art of the Wild collection that Jessica Biel chose for the Oscars took almost a year to make.

IRENE NEUWIRTH - The tiara and matching earrings worn by Ruth Negga were custom made by L.A.-based Neuwirth from Gemfields rubies.

COLLECTION OF THE YEAR

TEMPLE ST. CLAIR - The American designer, creator of the wildly imaginative Golden Menagerie collection, became only the third American to have her jewelry in the permanent collection at the Louvre.

INNOVATOR OF THE YEAR

TAFFIN BY JAMES DE GIVENCHY - A pioneer in the use of colored ceramics around even the rarest of stones.

COOMI - The designer is on a constant and singular quest to master ancient techniques and utilize found antiquities. This year’s results represented a profound mixture of past and present.

ALEXANDRA MOR - She discovered and introduced the Tagua seed, which mimics banned elephant ivory, into a sustainable High Jewelry collection.

BREAKTHROUGH OF THE YEAR

LAUREN ADRIANA - She has been a Holy Grail for collectors for several years, but a solo exhibit at Phillips in March puts the young British designer in a new league.

ANA KHOURI - A High Jewelry collection and a new by-appointment-only atelier in NYC put Khouri in the spotlight.

BETH BUGDAYCAY - The enameled cigar band rings she creates under the Foundrae label began adorning hands of jewelry editors a few years ago. They have since become a modern classic.

COLLABORATION OF THE YEAR

CHOPARD/RIHANNA - What happened when two red carpet powerhouses sat down with sketches and stones? A wildly extravagant and voluptuous High Jewelry collection that is both show-stopping and collectible.

MESSIKA/GIGI HADID - In a year when courting millennials became a focus, the forward- thinking diamond company enlisted Hadid, a generational hero, to see what diamond jewelry looked like to them.

ANDREW GRIMA - Princess Margaret was a fan—Marc Jacobs too (pictured) — and in September, Bonhams sold the largest private collection of Grima ever presented, introducing a new generation to his cutting-edge designs.

VERDURA'S RAVENNA - A benefit of the Coco Chanel/Fulco di Verdura friendship, the Ravenna Cuff was born in 1932, a few years after the Maltese Cross Cuff, and was made again by Verdura this year for the first time in 80 years.

BOUCHERON - The company’s 160th anniversary kicked off with a standout Hiver Impérial High Jewelry collection. The momentum continues with an exhibition at the Paris Mint and the reopening of the Place Vendôme headquarters.

STONE OF THE YEAR

THE ASSAEL PEARLS - Perfectly matched pearls assembled over 40 years by one Tahitian pearl farmer. They are a testament to the power of nature—and to patience.

4 DE FEVEREIRO DIAMOND - The 163-carat de Grisogono stone was the largest D flawless ever to be auctioned. It was sold for $33.7 million at Christie’s, a record.

RED SPINEL (NO HEAT) - Rare, and sometimes mistaken for ruby, it’s a jewelry secret no more. But an unheated 16-carat Burmese spinel could only come via an expert stone hound like Martin Katz.

DIAMOND OF THE YEAR

HARRY WINSTON - When the “King of Diamonds” comes into possession of a perfect 101-carat stone, what’s next? A 22-piece Legacy collection, all with D-color internally flawless diamonds.

REPOSSI - Gaia Repossi grew up in the jewelry world but made her particular mark in diamonds. The ear cuff trend that has brought the stone to a new audience? Credit goes to her.

FERNANDO JORGE - The Brazilian designer’s Brilliant series features his sensual lines, though not his signature colors. It was a worthwhile design risk — Brilliant has already won several awards.

PEARLS OF THE YEAR

MIKIMOTO – The company that discovered cultured pearls imagined a High Jewelry collection in which they shared space with rare stones; a new Mikimoto palette was born.

MIZUKI - The Privé collection used prized pearls Mizuki Goltz had been collecting for years. Their organic shape, however, remains recognizably hers.

NIKOS KOULIS - The Greek designer combined various cuts of diamond, and black enamel, with pearls to create a new jewelry geometry in his Lingerie collection

GOLD DESIGN OF THE YEAR

DAVID WEBB - Webb’s stone-studded animal bracelets can be daunting, but the company has been committed to equally bold yellow gold pieces for decades.

MICHAL KADAR - Michal Kadar’s European and North African heritage is evident in the sculptural lines of her collection. Her work has added new dimension and boldly unexpected shapes to design in gold.

MARCO BICEGO - Bicego trained in Italy’s Veneto region and has, consistently for 17 years, created pieces that are handcrafted and wearable. In fact, that is his mission.

WATCH OF THE YEAR

CARTIER PANTHERE - After decades of passionate requests that Cartier bring the iconic watch of the 1980s back, the Panthère made its return this year. The passion has not abated.

OMEGA 1957 TRILOGY TRIO - How to mark the 60th anniversary of the Seamaster, Railmaster, and Speedmaster? Present them to collectors as one.

LOUIS VUITTON - The house underscored its commitment to fine craftsmanship with the High Jewelry workshop at the new Paris Maison and with a series of exclusive rare stone pieces.

PHILANTHROPIST OF THE YEAR

BROOKE GARBER NEIDICH - The co-founder of the Child Mind Institute and Whitney Museum trustee donates all profits from her Sidney Garber collection to charity.

STEVEN LAGOS - Lagos donates all the profits from his Keep Memory Alive collection to the Cleveland Clinic Lou Ruvo Center for Brain Health in Las Vegas.

JEWELRY CHAMPIONS OF THE YEAR

MARION FASEL - The longtime editor and author launched a website devoted entirely to jewelry. Fasel, a jewelry historian, has found a winning combination of scholarship and entertainment.

ON THE ROCKS - The semiannual jewelry magazine published in London fills its pages with an artful blend of profiles, and a fusion of jewelry with fashion and contemporary culture that marks an important new point of view.

LEGEND OF THE YEAR

DAVID YURMAN - He has achieved global domination while keeping his independence and creating a design so iconic that a book was dedicated to it: David Yurman Cable.

SABINA BELLI - One of the few women leading a major jewelry brand, she has maintained Pomellato’s artisanal tradition while expanding and overseeing a stellar 50th-anniversary collection of one-of-a-kind rings.

JIM KERWIN - An industry insider who, for more than 25 years, has been an invaluable guide to navigating the media landscape, for both jewelry legends and those new to the market.

[Editor’s Note: If you're surprised that most of the above winners have been featured in my #WearableProzac series, on Instagram; you shouldn't be.]