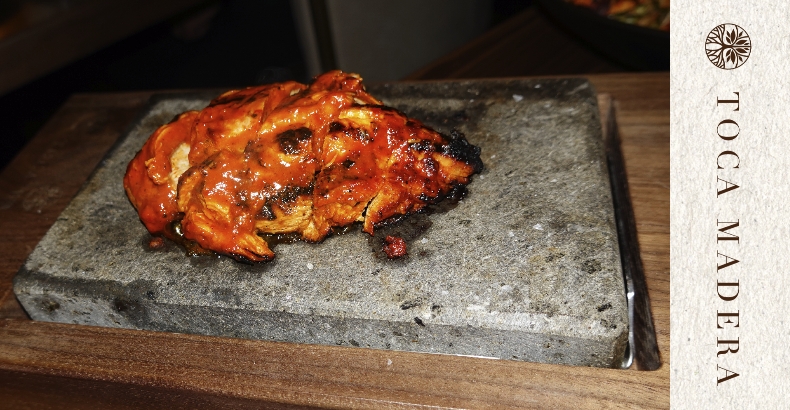 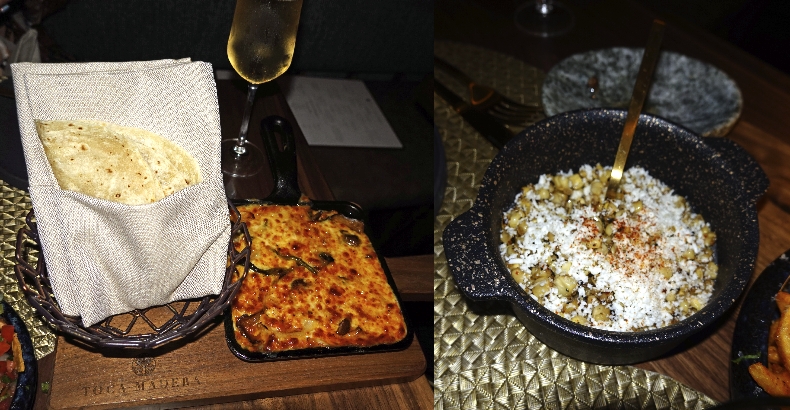 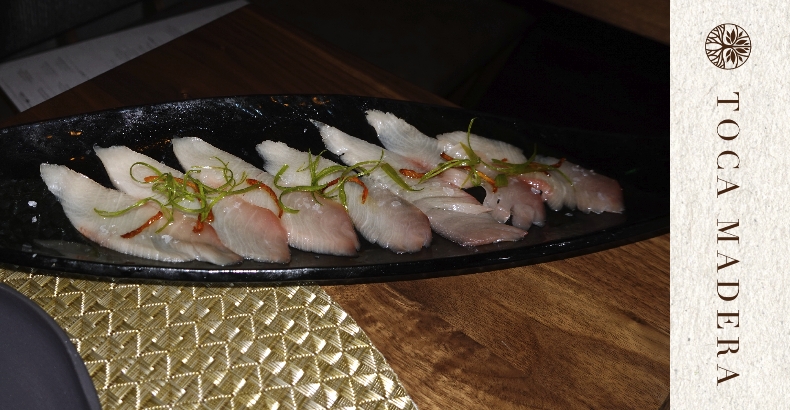 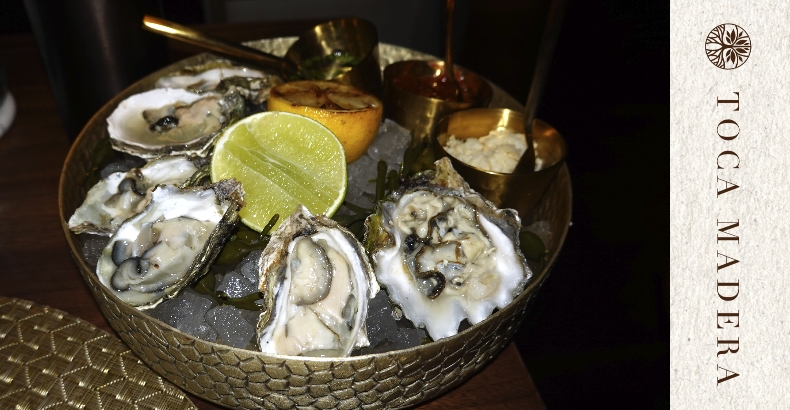 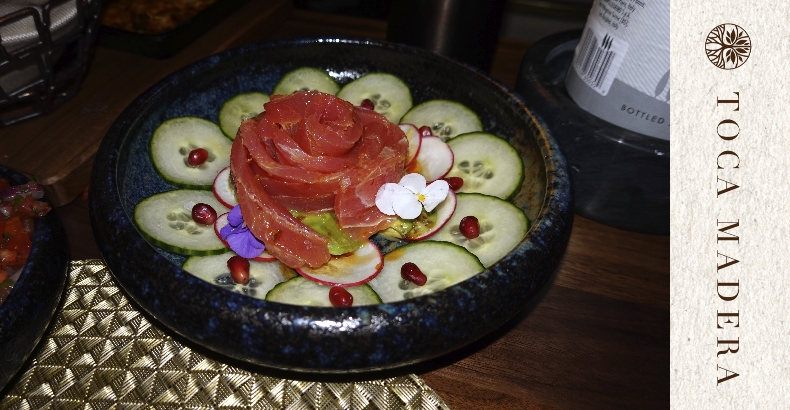 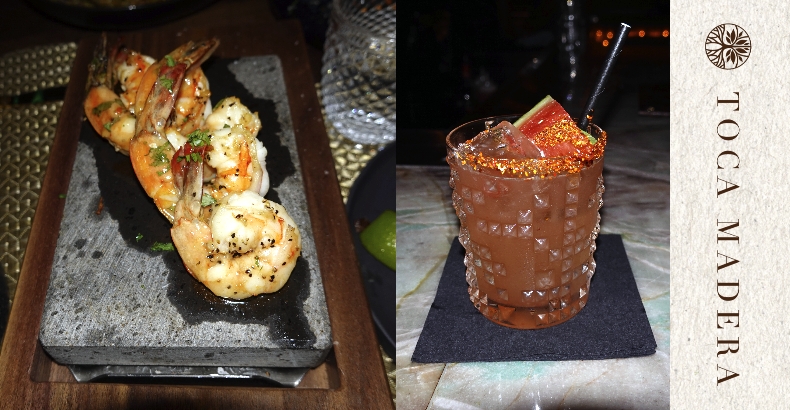 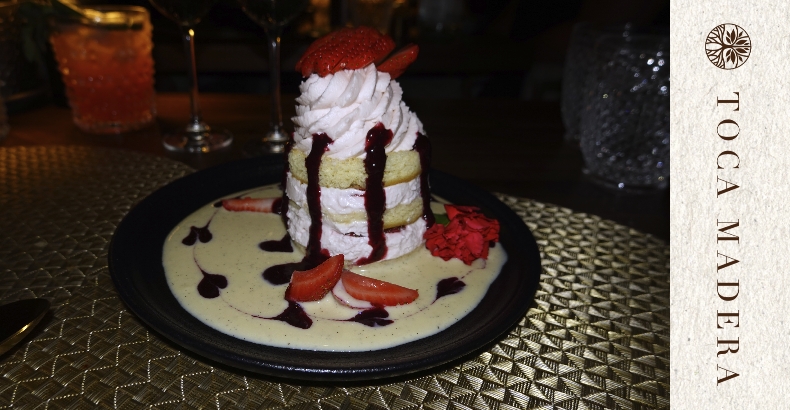 Some restaurants feature a façade that, when approached, belies the essence of what you find when you cross the threshold.  Toca Madera is not such a restaurant.  Quite the contrary, seeing as the first time I approached Toca Madera—located in the courtyard between ARIA Las Vegas and The Shops at Crystals, in the space formerly occupied by Todd English P.U.B.—and entered The Bird’s Nest (the immersive art installation-cum-outdoor lounge that serves as the restaurant’s entry) I was blown away by the nest-like cage filled with ersatz trees covering a reflecting pond filled with floating votive candles, and knew that whatever awaited me, inside, was gonna be worth experiencing.

And while the folks behind the Noble 33 Collection have taken a pre-existing space and renovated it, this was no mere reno job, and it was immediately apparent how they’d spent a reported $10 million building out the 10,000-square-foot space.  Taking the restaurant’s Mexican cuisine as its inspiration, the décor manages to be bold and modern while sacrificing neither warmth nor intimacy.  And while I could carry on about the venue’s design elements for days (Handcrafted custom woodwork!  Original artwork!  Biophilic design!), none of it would amount to a hill of beans without great food and terrific service.  Fortunately for Toca Madera’s guests (and proprietors), these are both particularly abundant.

Toca Madera identifies as a modern Mexican steakhouse.  To wit, the menu features a drool-inducing array of premium Australian and Japanese beef.  For whatever reason, though, I just wasn’t in the mood for a steak, that night; so please forgive the absence (minus one appetizer) of any beef dishes.  Frankly, it never even occurred to us, until we were leaving and noticed most of our friends had ordered steaks!

We began with cocktails, and I ordered the Watermelon Margarita (with Tromba Blanco, watermelon, Earl Grey Crème syrup, Thai basil, and lime), and it was exactly what I’d been hoping it would be: light, bright, and refreshing, with a hint of fruitiness (without being too sweet), and a subtle kick.

Our first round of appetizers consisted of the Hamachi (with mango, white balsamic, crispy habanero, and green onion), the East to West Oysters (with Fresno mignonette, chipotle cocktail, horseradish, and fresh citrus), the Queso Fundido (with queso Chihuahua, poblano Rojas, soyrizo, and flour tortillas), and the A5 Wagyu Tacos (with crisp wonton, Kizami wasabi, Cali green onions, and micro shiso).  As I hadn’t been expecting a raw bar, I was particularly taken with the Hamachi.  And while I left the Oysters to my lovely dining partner, I found those Wagyu Tacos to be wonderful, like little bits of meaty goodness that were at once crunchy and tender.  Of course, the Queso Fundido was great, but it’s pretty much a given that I’m gonna like any dish consisting mainly of melted cheese.

While technically part of the same course, I am singling out the Sashimi Mexicana (with ahi, cucumber, avocado, pomegranate, Chile de árbol, and Leche de Tigre) for a few reasons, not the least of which is that I’m convinced that, within a month or two, this dish will be among the most Instagram-ed, in Las Vegas.  Here’s the skinny: The chef takes a flat-bottomed bowl and places thin slices of avocado in the center, around which are placed concentric circles of first radish, then cucumber, with a pomegranate seed placed on top of each cucumber slice.  Then some of the Leche de Tigre is drizzled over the top.  Now, the chef takes a half-dozen long strips of ahi and folds them into the shape of a rose.  This rose is then placed in the center of the bowl (on top of the sliced avocado) and is garnished with some more drizzle and some edible flowers.  Click here to watch the preparation of Toca Madera’s Sashimi Mexicana.

Next up was the Toca Caesar (with romaine hearts, lime pepitas, garlic herb crumble, truffle Manchego, and chipotle tomato Caesar dressing), and a dish called A La Roca, which is served on a hot rock, and we ordered two ways, one with Jidori Chicken and the other with U10 Shrimp.  The Caesar was zesty and piquant and more substantial than I’d expected.  And while the U10 Shrimp a la Roca was pretty fantastic, the Jidori Chicken a la Roca knocked my friggin’ socks off!  I can say without hesitation that I’ve never tasted a Mexican preparation of chicken that tasted like this.  To my mind and palate, it was reminiscent of tandoori chicken.  Regardless, it was prepared to perfection.  Cooked through, juicy and succulent, and flavored to the gods!

By this point, we were so full that we nearly passed on dessert; but I’m glad we didn’t because the Strawberry Tres Leches (with sweet vanilla cake, tres leches Anglaise, and strawberry) was pretty fantastic.

There’s so much more to discuss when speaking of Toca Madera, from the hidden speakeasy and the secret VIP entrance to the live performance artists dancing with fire to the slick House-meets-World Music beats emanating from the DJ booth (my favorite being the David Morales Unreleased Mix of “Parole, Parole” by Anané (2020), a delectable cover of the 1973 French hit, “Paroles, paroles” by Dalida featuring Alain Delon); but, I’m just going to say this: I can’t wait to go back!

Toca Madera
The Shops at Crystals
Click HERE for info