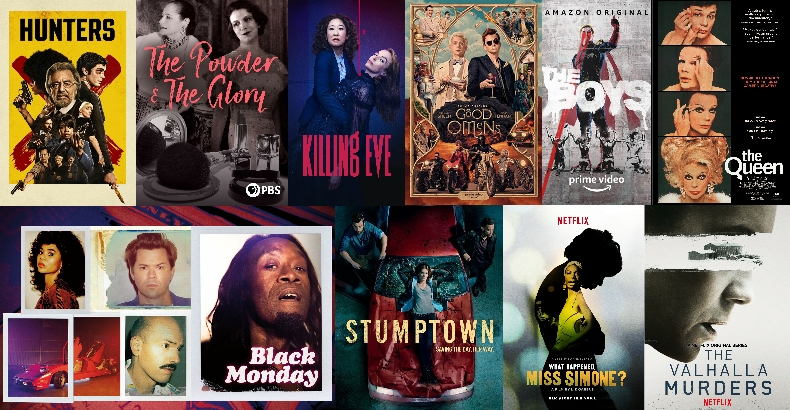 Here, in Part 2, are five programs—two series, one miniseries, and two documentaries—that I'm currently looking forward to watching, but haven't yet had the chance to do so.

WHAT:  Already renewed for a fourth series as the third is just getting underway on BBCAmerica, this pitch-black dramedy-cum-spy thriller based on Luke Jennings’ Villanelle series, is at once manic and maddening and marvelously made.  The show has won numerous accolades for Sandra Oh (a Golden Globe Award and a Screen Actors Guild Award), Jody Comer (a Primetime Emmy Award and a BAFTA TV Award), Fiona Shaw (a BAFTA TV Award), and the series, itself (a BAFTA TV Award and the Peabody Award).  Trivia: Each series/season has featured a different female showrunner, starting with Phoebe Waller-Bridge, then Emerald Fennell, and now Suzanne Heathcote.

WHAT:  A six-part apocalyptic comedy—created and written by comic-book legend Neil Gaiman (The Sandman, Coraline, American Gods) based on the absurdly funny novel he wrote with Terry Prachett (Diskworld), Good Omens: The Nice and Accurate Prophecies of Agnes Nutter, Witch (1990)—in which an angel and a demon, having grown fond of Earth, sabotage the coming Apocalypse.  I am a huge fan of Gaiman’s (and adored reading Good Omens); so, while I haven’t yet watched it, I am very much looking forward to doing so.

WHAT:  Based on the comic book series of the same name by Garth Ennis (Preacher) and Darick Robertson (Transmetropolitan), and developed for Amazon by Eric Kripke (Supernatural, Timeless), The Boys is an action-comedy/crime series set in a world with superheroes, with one big twist: They pretty much suck, especially the members of the Seven.   Enter the titular Boys, a clandestine group of vigilantes who try to reign in the dangerously arrogant heroes who’ve been corrupted by celebrity.  I loved Antony Starr in Banshee, and pretty much dig Urban, Pegg, Shue, and Esposito in everything, so this outta be fun.

The Powder and the Glory

WHAT:  Based on Lindy Woodhead’s insightful bestseller, War Paint—which also inspired the musical of the same name—The Powder and the Glory tells the true story of rival female entrepreneurs, Elizabeth Arden and Helena Rubenstein, both of whom came to New York in the early 20th century, and built their eponymous companies into the internationally renowned beauty giants they remain to this day (though the Rubenstein and Arden brands are now owned by L’Oreal and Revlon, respectively).  And while they opened their flagships only blocks away from each other, the two are believed never to have spoken.  Who knows?  Maybe this will be a future season of Ryan Murphy’s Feud?

WHAT:  The life of brutal honesty lived by the iconic Nina Simone, is the subject of Liz Garbus’ 2015 bio-doc on the iconic singer, pianist, and civil rights activist, who self-exiled to Liberia in the mid-‘70s.  Featuring unreleased archival footage, and executive produced by the High Priestess of Soul’s only child, Lisa Simone Kelly; What Happened, Miss Simone? opened the 2015 Sundance Film Festival, won a Peabody Award, and the Primetime Emmy Award for Outstanding Documentary or Nonfiction Special, and was nominated for the Academy Award for Best Documentary Feature.

Get into it!
#Streaming