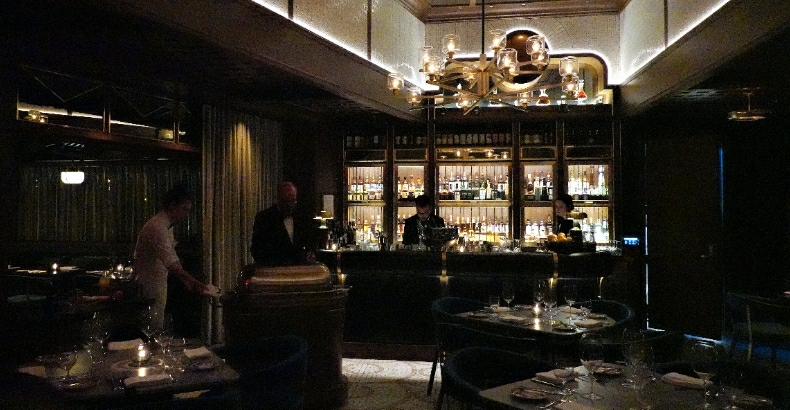 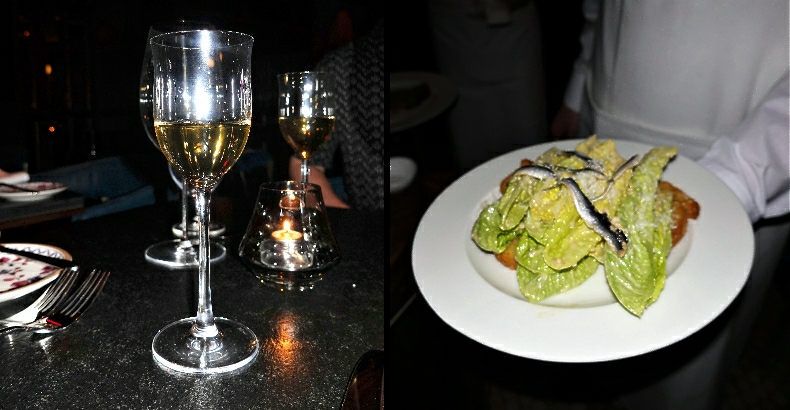 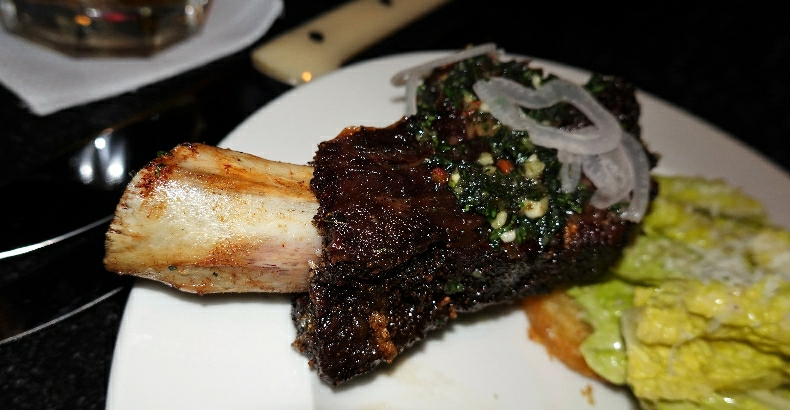 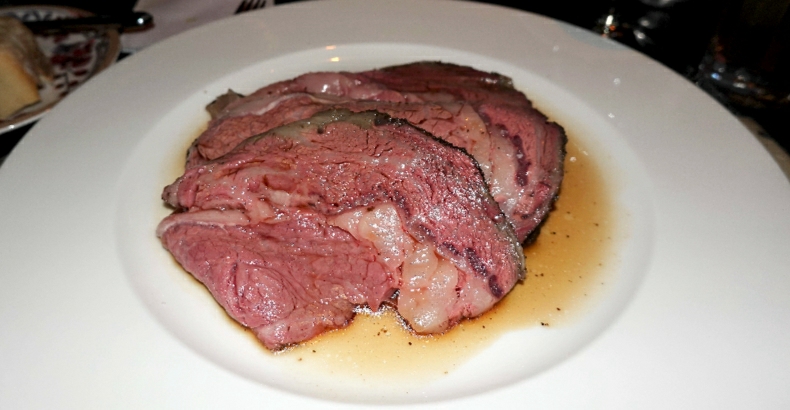 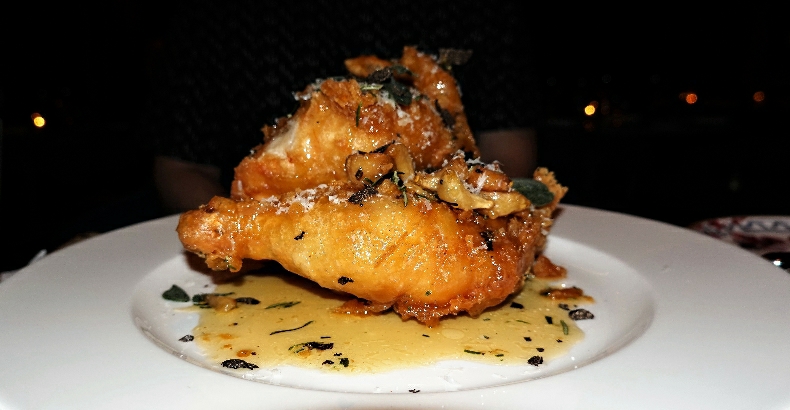 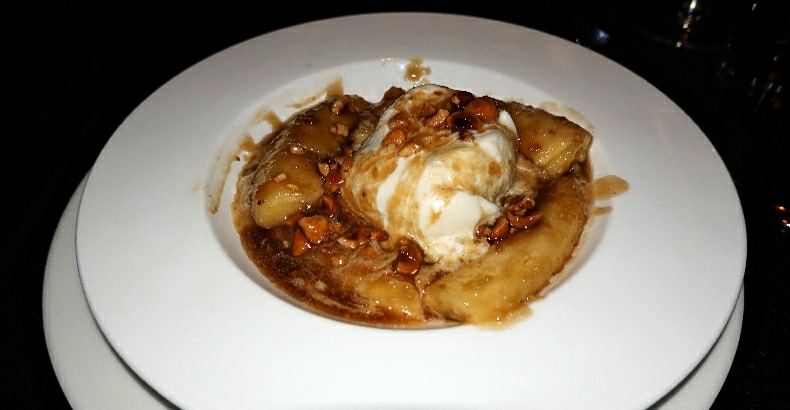 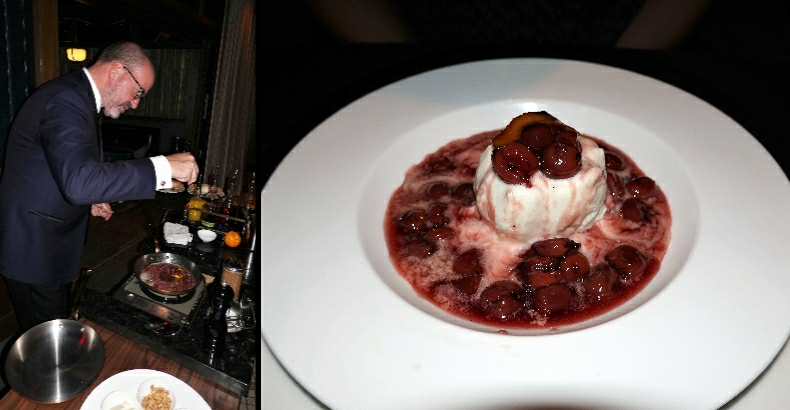 All manner of dining concepts are on the ‘menu’ in Las Vegas; so, when a restaurant does something “new” (even if it’s a fresh spin on a not-so-new idea) and does it remarkably well, that makes an impression.  And, in the case of Sara’s – chef Michael Symon and Doug Petkovic’s hidden gem of a supper-club at Palms Casino Resort – that impression can be boiled down into one word: Special.

An evening at Sara’s doesn’t begin at the door; but rather at the entrance to Symon’s vast Palms-based barbeque palace, Mabel’s BBQ, where you check-in with the hostess at the front; who, after communicating via walkie-talkie with a co-worker, asks you to follow her, past the bar, to an unmarked door where you are handed-off to a host.  Upon being buzzed through, you find yourself in a dimly-lit vestibule of sorts, from which another door opens, and you are welcomed into the bar at Sara’s.

The first thing I noticed was the lighting story.  I love a dimly lit venue (so long as I can use the Flashlight app on my iPhone to read the menu), and as our reservation was for 10pm, the lighting was perfect for the mood, which was, in the words of Sandra Bernhard, “very Dewar’s on the rocks.” You know, a quiet but confident sophistication that’s never too pushy, but knows that you’re picking up what it’s throwing down?  And I don’t know who was curating the music, but it was en fuego!  A lot of funky ‘70s soul (think: James Brown, Slave, Barrabas, Teddy Pendergrass, George McCrae, etc.), and it was just delicious, in that setting.  Seeing we were one of only three couples there, that late, I was pretty much boogying down at our table.

But the real headline at Sara’s is the food and the service, or maybe it’s the service and the food.  Regardless, the front and back of the house move congruently with each other, resulting in a seamless experience.  So, let’s talk about that.

Due to the high staff-to-guest ratio, someone is always keeping an eye on your table, so that at the slightest crook of the head, a server is by your side.  The night we dined, Petkovic (the bespectacled gent preparing the food, in the video, above) was working as maître d’ and table captain – manning the Prime Rib cart and preparing the flambé desserts – and proved especially adroit at attending to his guests while still taking the time to inspect the presentation of each plate before it was served.

The menu is a simple to absorb, two-paged affair; with starters on the left page, and mains and sides on the right.  We opted to go halfsies on everything and started with an order of Crispy Beef Bones (duck fat-fried with horseradish, parsley, chiles, citrus, and shallot) and a 1924 Caesar (with parmesan, anchovy, romaine hearts, and croutons).  Now, one of my family’s favorite things to eat are “beefy bones” (basically what remains once you’ve carved the prime rib), so I kinda flipped-out when I saw them on the menu, and the minute they came-out I flashed on that scene from Indiana Jones and the Last Crusade, when the knight tells Indy he has chosen wisely.  The only downside?  They smelled so good that foregoing any sense of etiquette, I picked mine up and bit into it before I could take a photo.  So, apologies about that.  And before you judge me, let me remind you, that they were fried in duck fat (as so many of the best things in life are).

My notes about the 1924 Caesar - taking its name from the year in which Cesare Cardini created his namesake salad at his eponymous restaurant, Caesar's, inside Tijuana’s tony Hotel Cesar - read simply “a legitimately Caesar-y Caesar salad."  And here's a tasty morsel of trivia for you: What we currently know as the Caesar Salad (and what you’ll enjoy eating at Sara’s) is actually an “Aviator Salad” – a twist on the original, created by Cardini’s brother, Alex, who added anchovies when he began working at Caesar’s.  Alex’s became the more requested preparation, and after a couple of years would replace the elder Cardini’s version as the restaurant's ‘official’ Caesar Salad.  Now, you might be thinking, “So what?”  Here’s what.  A great Caesar Salad is a balancing act.  Too much lemon or garlic or anchovy, and the whole thing is thrown out of whack: Ain’t nobody got time for that.  The 1924 Caesar features crisp romaine that (like its Mexican fore-salad) allows for lifting by the stem and eating with one’s fingers (should one so choose), in a sublime dressing that’s at once creamy and garlicky and citrusy, in just the right way.

I’m a big prime rib fan, in the best of times; but tend to steer away from anything smoky.  But I’m all about submerging myself in the ways of my host, so told Doug to do-do that voodoo that he was doing so well, with regards to the Smoked Prime Rib, which resulted in my being presented with a trio of thinly-sliced pieces (aka “English-style”) of USDA Prime Rib of Beef with Jus & Horseradish (the latter of which was shaved over the plate).  As for the smoke-flavor?  According to my notes, it had “just the right amount of smokiness” (underlined, and followed by an absurd number of exclamation points and a smiley face) which sums it up, nicely.  Apparently, I love Smoked Prime Rib.

Now in most such circumstances, I’d have stopped with the Prime Rib, and gone out on a high note; but most circumstances would not have included Sara’s Truffle Fried Chicken (with sage, honey, and parmesan), which took us to the teetering heights of comfort cuisine.  No stranger to fried chicken (it’s a key component to my pear-shaped physique), upon its presentation I sat there, examining the Truffle Fried Chicken from various angles, and letting its sweet and savory scents delight my olfactory system.  Then I bit in; cutting a wedge of crispy crust, and succulent meat, made all the moister by the honey.  Come to think of it, the dish is kind of like a glamorous version of Fried Chicken and Waffles wherein the waffles and maple syrup are the crispy skin and honey, respectively.

As for dessert, we opted for Bananas Foster and Cherries Jubilee, both made tableside, by Doug.  Now, both are fairly classic recipes, and it’s on the maître d’ to flavor and flair according to his whim.  The Cherries Jubilee was pretty good (as good as anything flavored by a colorless brandy made by double-distilling morello cherries has any right to be).  Luckily for me, in preparing the Bananas Foster, Doug seriously caramelized the bananas, making for a syrupy elixir that (having observed that we were the last men sitting, as it were) I used my spoon to sip, like a sweet soup.

Buzzing from our fantastic evening (that had begun hours earlier at Diana Ross' Diamond Diana residency show, at Wynn Las Vegas), we opted for some après, upstairs at the lovely (and just-as-secluded) MR. COCO.  Alas, much as I'd love to carry on about Francesco Lafranconi's zhuzhy lounge, it'll have to keep until another time.