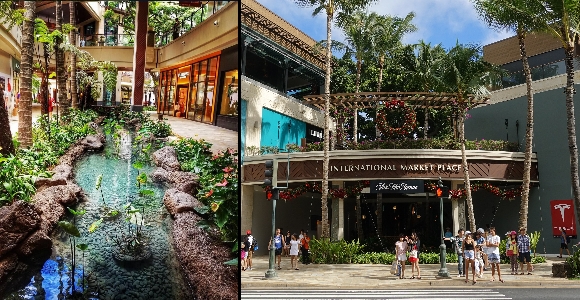 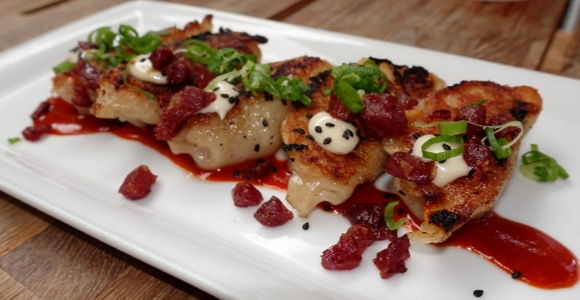 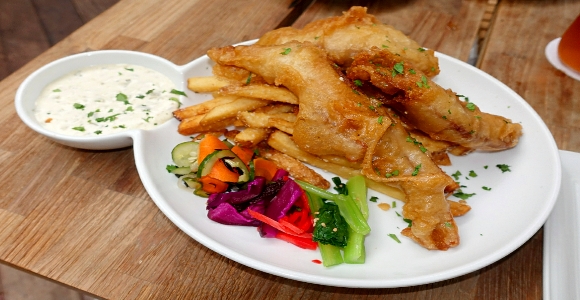 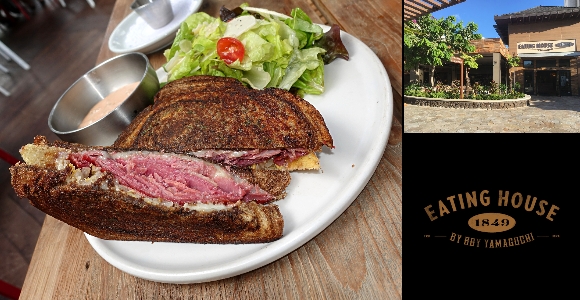 About a year ago, while vacationing in Hawaii with the fam; I got a hankering to check-out the "new" International Market Place.  First opened in the late ‘50s by Ernest Gantt (better known as legendary Tiki mixologist, Don the Beachcomber); by the time I first viewed it (c. late ‘70s), its celebrity sheen had faded, giving way to what would – by the turn of the millennium – become a somewhat shady bazaar of kitsch, where you’d be just as likely to score a dime-bag and fake I.D., as a wacky t-shirt, a hand-carved candle, or a flip-n-strip pen.  Not to put too fine of a point on it, but my mother used to make us wear close-toed shoes, there; for fear that we’d contract tetanus.

Then, a few years ago, the entire property was closed-down for renovations; reopening this year, with a flourish.  The International Market Place had done what other Waikiki venues had done decades earlier, and reinvented itself as an upscale outdoor mall. Now, anchored by Saks Fifth Avenue and a Tesla dealership, with signature boutiques from BCBG Max Azria, Burberry, Brunello Cucinelli, Christian Louboutin, Intermix, Jo Malone, MAC Cosmetics, Oliver Peoples, Stuart Weitzman, Shinola, and Vilebrequin; well, there ain’t nothing kitschy about it.

And the crown that rests atop this 345,000-square-foot open-air venue, with its lazily snaking pathways and terraces, is the Grand Lāna’i.  With a comprehensive array of dining options, including Michael Mina’s StripSteak, Yauatcha (a Chinese dim sum teahouse), Baku (Japanese robata and yakitori cuisine), and Flour & Barley Brick Oven Pizza (from Las Vegas’ own Block 16 Hospitality); the Grand Lāna’i is where I found myself, proud for deciding against buying a pair of Fendi’s Monster Slip-on Sneakers.  As a reward, I decided to check-out the latest from Chef Roy Yamaguchi – Eating House 1849.

Featuring fare billed as “plantation cuisine inspired by Hawaii’s past,” I learned, online, that Eating House 1849 is a culinary tip of the toque to Peter Fernandez, who (as legend has it) was Hawaii’s first restaurateur, opening his Eating House, in the mid-1800s; stocking it with whatever was available from local fishermen, farmers, and foragers. By my estimation, this posthumously makes Fernandez the godfather of the locavore/farm-to-table movement.

So, I ambled over, and was promptly seated at a lovely table on the enclosed wooded terrace; itself a woodsy retreat atop of what is essentially an enormous treehouse.  I’d basically decided to go with the Yamaguchi-flow, and had my order figured-out; when my server came by and threw a wrench into the works.

Here’s what happened…  Being fairly familiar with both Yamaguchi and Hawaiian Regional Cuisine, I had perused the menu (my favorite sort – one page, front only), and had pretty much decided to start with the Pork & Shrimp Gyoza, followed by the “Today’s Catch” Fish & Chips (depending on what that day’s catch was).  I was relaying this to my server, when she pointed-out that one of the most popular items on the menu was their Rueben.  For reals?

Intrigued, I urged her to continue.  I mean, c’mon: How good could it be?  And would it make a believer outta this middle-aged Jewish fellow who was essentially weaned at the Carnegie Deli?  Despite having little to no idea what I was carrying-on about, she told me about how their corned beef was cured in-house, how they used a blend of Swiss and Gruyere cheeses, and how instead of sauerkraut (most of which I usually scrap off) they used Mul Kim Chi – which is a very mellowly seasoned version of kimchee.

Okay.  I was sold enough on the Rueben to order it; but became torn when I was informed that the catch of the day was Mahi-Mahi.  So, I decided to bite the bullet, and order them both.  Second best decision I’d made that afternoon (I’d have worn those shoes once, then given them the side-eye whenever I saw them looking at me, from their shelf.  Ugh!).

So, what happened?  Simply put – I ate the bejeezus outta that lunch.  It was fantastic!  Some of the best Gyoza I’ve had, anywhere; tender, meaty, and flavorful.  The Mahi-Mahi Fish & Chips was perfect; light, flakey, and with a killer tartar sauce.  But that Reuben, tho! First of all, the corned beef was lean as can be, while avoiding the dreaded dryness that so often accompanies a general lack of fat. The blend of cheeses was goopy and yummy.  There was that savory hint of butter that one only gets from grilling a sandwich; and as far as I’m concerned, everything in life should come with a side of homemade 1,000 Island dipping-sauce.

And while the nostalgic part of me might momentarily be misty about the International Market Place that was (and will never be again); the part of me that enjoys experiencing nice things is relishing the IMP’s new vibe – especially the restaurants on the Grand Lāna’i.  Mahalo nui loa, Chef Yamaguchi!