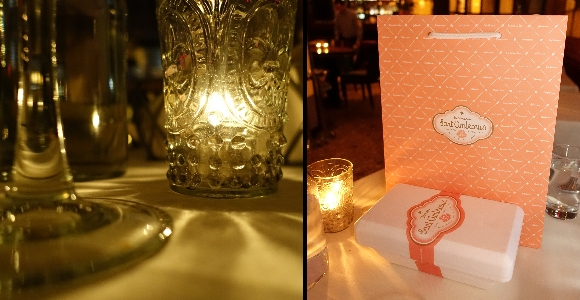 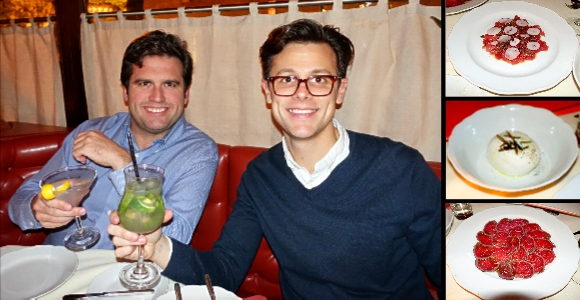 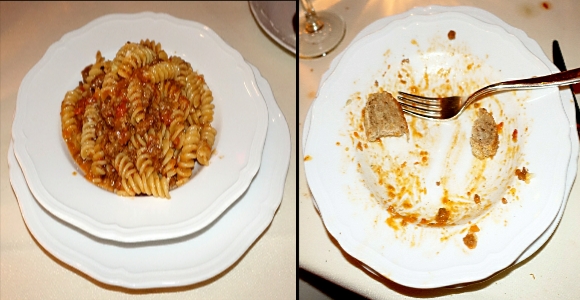 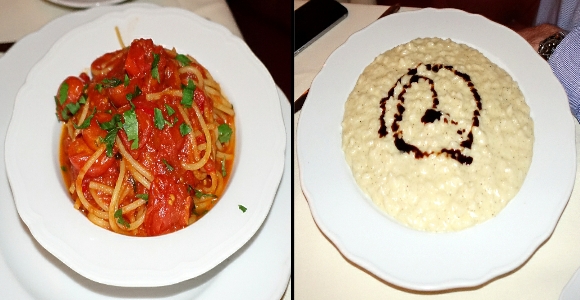 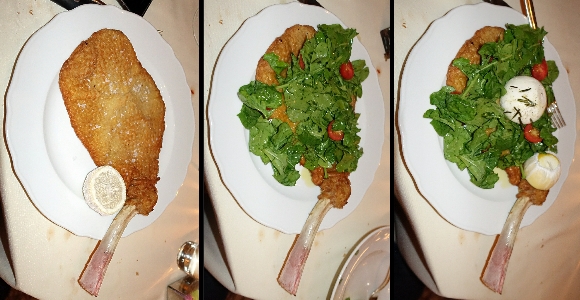 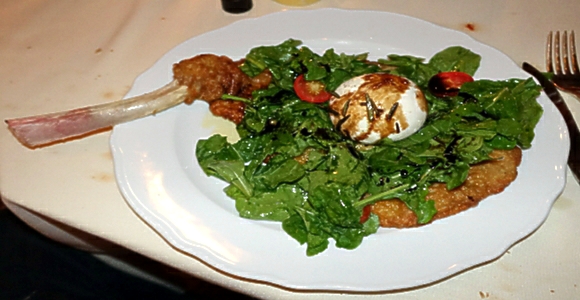 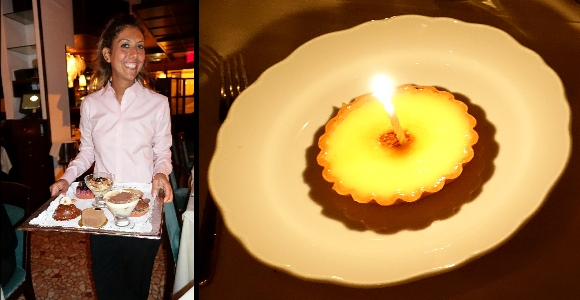 I was in New York, and my darling friends Jeffrey and Billy (aka the Tousey-Gilbanes) were taking me out for dinner.  After much back-and-forth, between the two of them (as I rolled-around on the floor, with my adorable new canine pal, #GrahmTheDog), they decided to take me to the West Village outpost of Ristorante Sant Ambroeus – the Upper East Side pasticceria that traces its origins back to 1930s Milan.  We walked over, and the restaurant seated us in a charming octagonal corner banquette, that allowed us to stretch-out and really get comfortable (which was great, as I take-up a lot of room).

I was rather famished, and the boys were thirsty; so we started with some cocktails and an array of appetizers, including the Ahi Tuna Tartare (raw Hawaiian tuna, Taggiasca olives, capers, radish, and mustard dressing), the Burrata (local burrata cheese with chives and extra virgin olive oil), and the Carpaccio di Manzo (thinly sliced raw filet mignon with horseradish mayonnaise and Shanghai spinach).  The Carpaccio came out first and was so tasty, that we ordered a second round that we ate with the Buratta.

Now, having sated my initial feeling of abject hunger, we settled in for the evening and the delicious fare that the kitchen brought out.  First on the list was the evening’s pasta special – Fusilli with Lamb Ragù, Tomato, and Grapefruit Zest.  I figured it’d be a fun nibble as I waited for my entrée.  What I wasn’t prepared for was the pasta’s utterly perfect preparation.  I’m not sure if it was the “best” pasta dish I’ve ever eaten, but it was certainly the most perfectly prepared.  Everything was right – the ratio of oil to water; that firm-to-the-tooth quality of the fusilli noodles (from Cavalier Giuseppe Cocco) that epitomized what those clever Italians call al dente; the way the rich ragù clung to the noodles.  Purists would probably condemn me for showering it in grated parmesan, but it was just wonderful, and I savored every bite until I’d sopped-up the last of the sauce with my bread.

I chose to go with the Cotoletta alla Milanese (traditional breaded veal chop Milanese, garnished with rucola and tomatoes) that I Shulmanized, by topping the chop with an order of Buratta, drizzled with that yummy Villa Manodori balsamic vinegar.  Sure, our server looked at me like I was on furlough from the loony bin, and I’m sure that in the retelling, her tales of the crazy American made the chef grimace; but I’ll say this: I’m salivating now, as I ruminate about it – and if that’s not the sign of deliciousness, I don’t know what is.

When it was time for dessert, our server presented the Dessert Tray, from which we selected the Tarte al Limone and the Gianduja (a chocolate hazelnut tart); while on our way out, the boys ordered some of Sant Ambroeus’ famous gelato, to go.

A marvelous meal, with a pair of my dearest friends, celebrating me…  Add in the perfectly prepared pasta and that scrummy veal chop - what more could a self-absorbed fellow want out of life?   (Answer: Not much!)