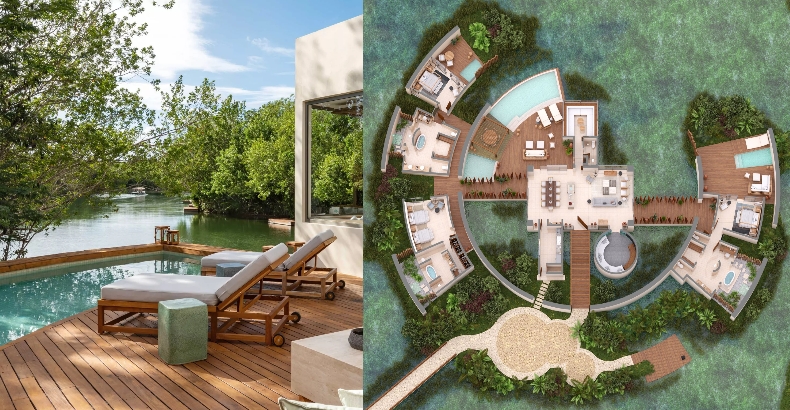 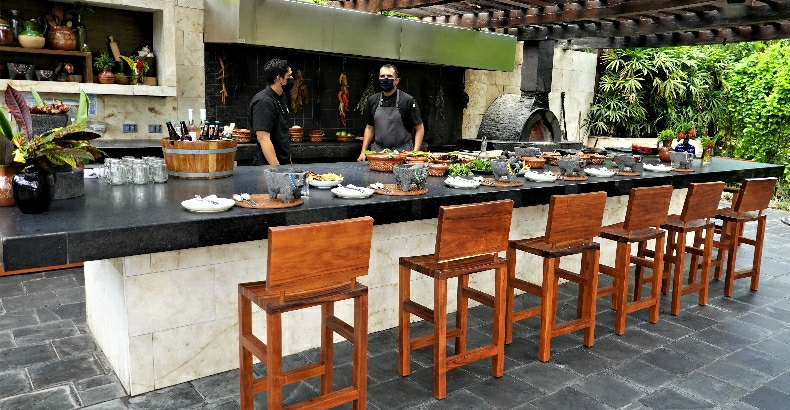 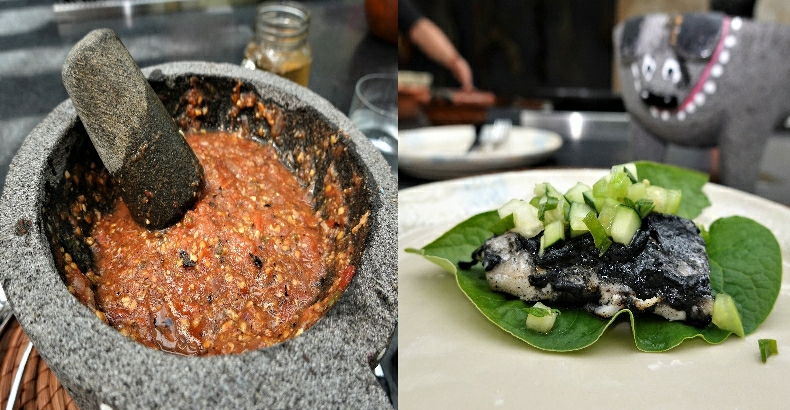 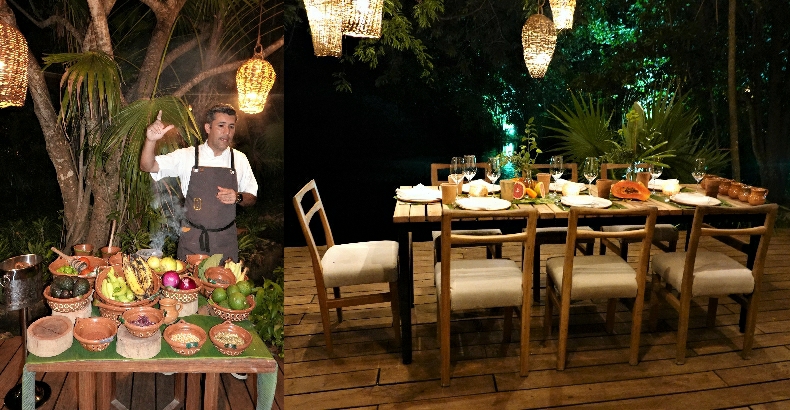 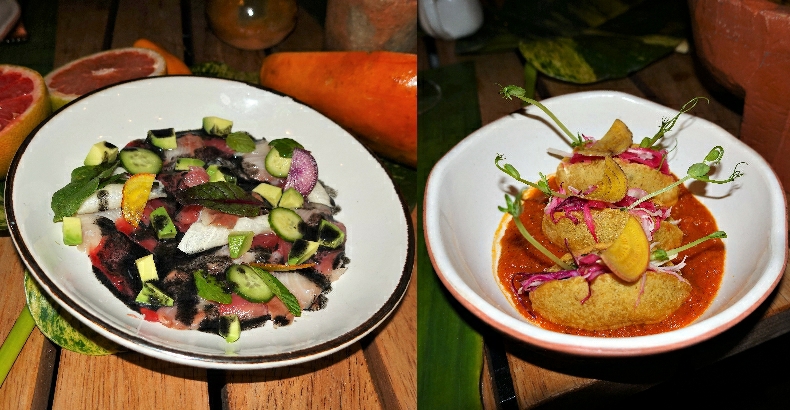 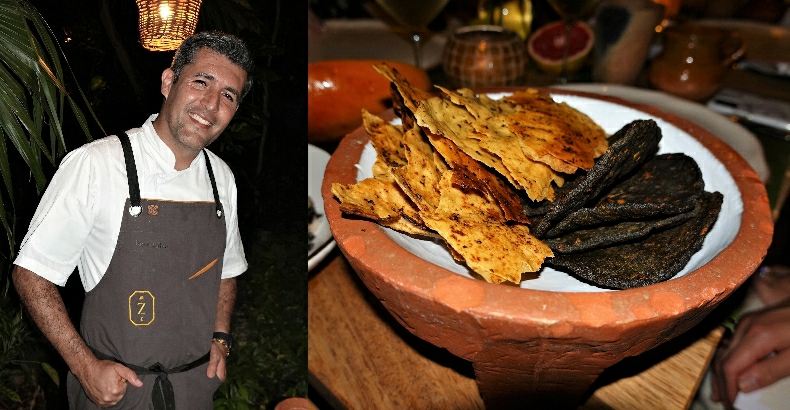 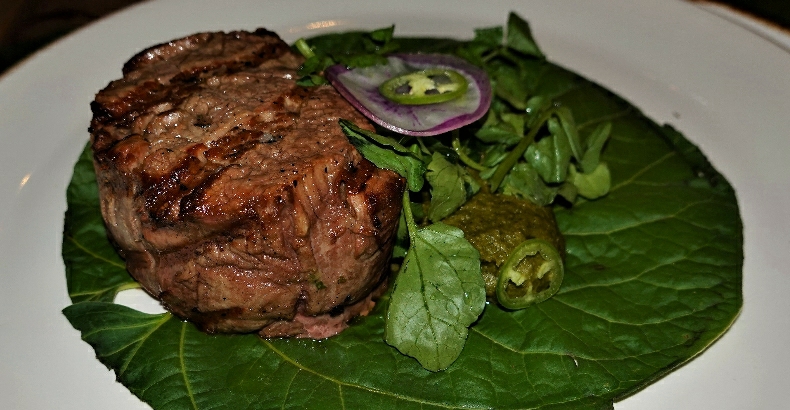 Technically the second day of my Wellness Retreat at Rosewood Mayakoba was supposed to have begun with something called Float Yoga, but that was scheduled for 8am; and while I’m sure it was lovely, for me, wellness does not involve setting an alarm.  I had to be in the Lobby at 9am, though, to get my COVID test for my return flight home.  Fortunately, I’d spoken with Cesar, the night before, and sure enough, my breakfast was there, waiting for me, upon my return.

I met up, once again, with my group at the Sense Spa, where—under a big palapa—we met with Daniel Seymour, the resort’s Ayurveda practitioner.  Hailing from the beautiful island of Guadeloupe in the Caribbean, and featuring a rich baritone, Daniel sounds like he should be heard doing voiceovers on television for car insurance or saying, “This is CNN.”  Also, whether as a result of good genetics or good living (he’s also vegan), the man looks to be in his mid-thirties.  It would seem I’m not the only one who was under this impression, because someone asked him how old he was, and when he said, “I am 61,” the six of us all looked up at the same time, with each and every one of our jaws gaping open, followed by a lot of excited yammerings declaring our utter disbelief.  But, I guess, go Ayurveda!

Anyhow, this hour was spent with Daniel explaining the basic tenets of Ayurveda, and the power of breathing, and how it impacts our minds, our emotions, and our ability to self-heal.  I’m all for oxygenating, and between Daniel’s melodic voice, the heavy breathing, and the sounds of nature, I was lulled into a delicious meditative state.

But then, all too soon, our session had concluded, and it was back to my Wellness Suite to shower and change for our cooking class and lunch at La Ceiba Garden & Kitchen, where we received personalized instruction in the fine art of making Yucatan-style salsa.  We sat at the counter, where a large stone molcajete and tejolote—an Aztec mortar and pestle made from volcanic rock—waited at each of our places.

I learned a few things in that class.  First, I make a sensational salsa (but more on that in an upcoming installment).  Second, any cooking endeavor is a breeze when professionals have done all of the prep-work for you; present you with the ingredients, butler-style; and are discreetly cleaning as you make assorted messes.  Our cooking class concluded with the chef preparing us a delicious lunch of Totuava (a large fish found in Mexico’s Gulf of California) cooked in root beer with a pinch of salt and wrapped in Acuyo Jacinta leaves.  We all left with big smiles on our faces.

Then it was back to our respective villas to change for our spa treatments.  Mine was the Conscious Body Ritual, a holistic and innovative combination of five treatment types—acupressure, reflexology, aromatherapy, logotherapy, and massage—that utilizes 11 pure essential oils and specially designed remedies to eradicate the deep-rooted stress our bodies store in key areas.  The goal is to restore balance and promote a deeper contact with your inner self.  I don’t know about all that, but what I can say is that I left feeling very blissed out and couldn’t stop smiling for the rest of the day.

After a soak, a nap, and an invigorating outdoor rain shower, it was time to reconnoiter with the group for cocktails in the Lagoon Presidential Suite; an expansive, circular three-bedroom retreat comprising 8,550 square feet (3,800 indoors and 4,750 outside), centered by a living and dining area, a kitchen and pantry, and a circular media room with painted silk walls.  It was particularly well-appointed and the six of us had a blast imbibing on the various patios and terraces.

From the Lagoon Presidential Suite (as the name implies, there’s also a Beachfront Presidential Suite), we returned to Spa Island, where we were led to the Spa Cenote where, on an intimate dock, Rosewood Mayakoba’s Director of Culinary Operations, Chef Juan Pablo Loza, was waiting to prepare our Yucatan Heritage Dinner.

After we tossed handfuls of spices into the cenote as an offering to the spirits, the meal was presented.  We began with a fresh and flavorful Kampachi and Tuno Tiradito (with black aguachile, passion fruit, and mint), as well as some savory Fried White Bean “Polcanes” (with cabbage salad and toasted pumpkin seeds); and for our entrée had a choice of Beef Tenderloin, Fish Fillet, or Cauliflower (with green pipián, and aromatic herbs and spices).  I opted for the tenderloin, and it was as moist and tender as I could’ve hoped, while the pipián—a green mole of sorts made from pureed greens and ground pumpkin seeds—added a zesty punch.  Dessert was a Caramelized Brioche (with walnut praline and pumpkin seed horchata) served with a scrumptious Cotija Cheese Ice Cream, followed by coffee served with a tasting of Tabasco chocolates that were so piquant they would’ve had Emeril Lagasse yelling “Bam!”

Then, once I'd enjoyed my coffee and desserts, it was back to the villa for another outdoor rain shower followed by bed.