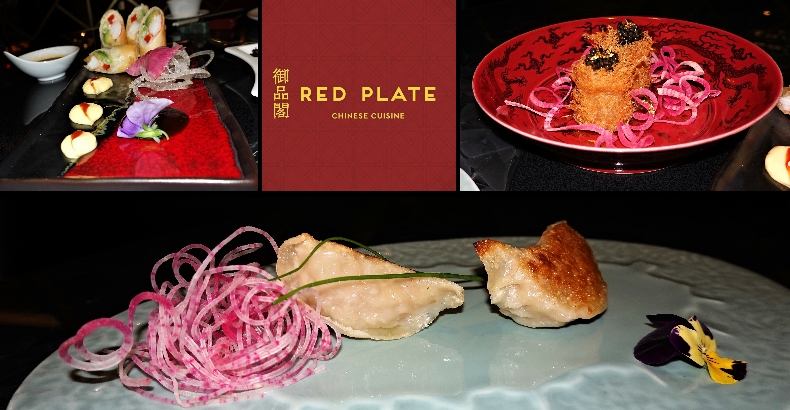 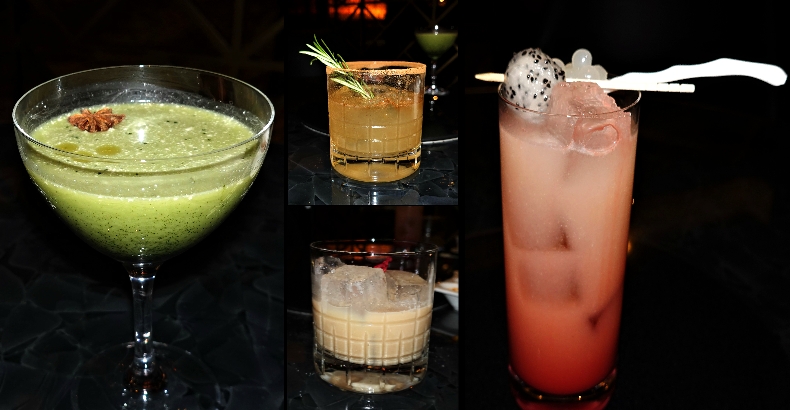 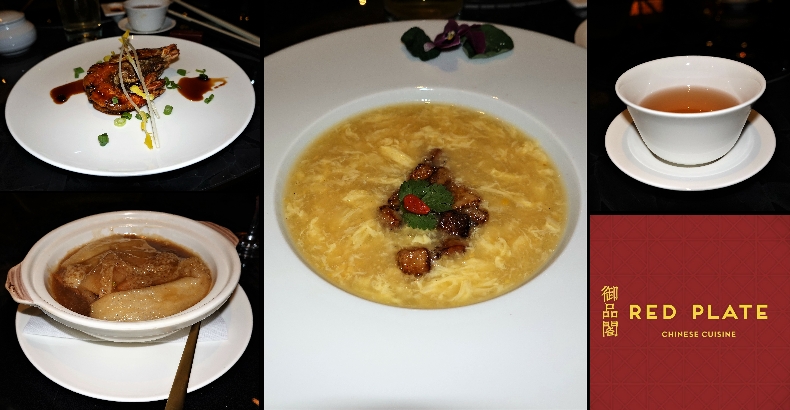 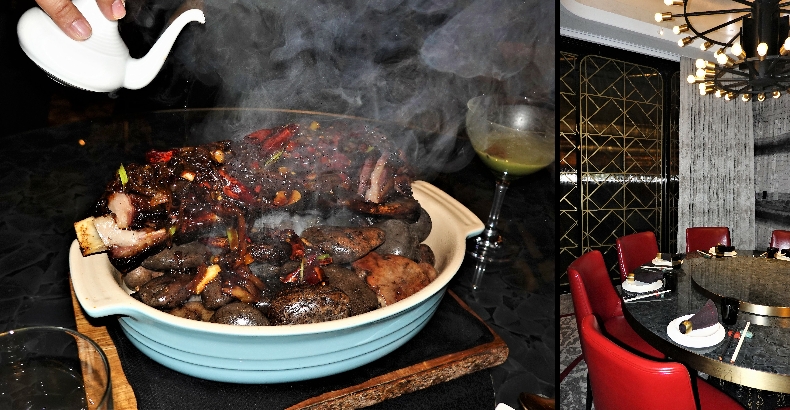 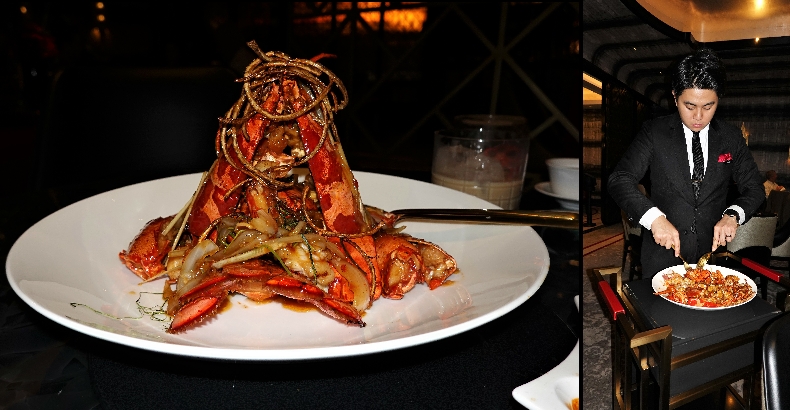 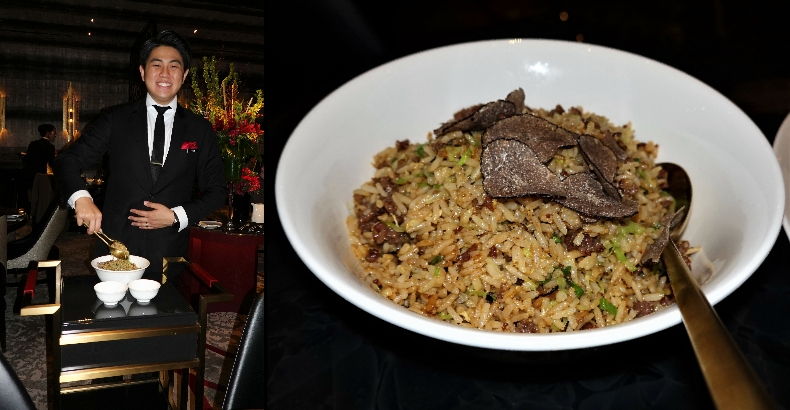 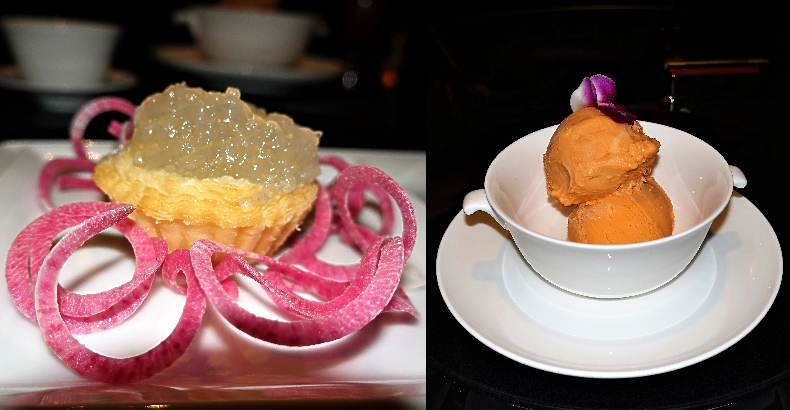 These days, everything remotely luxury-oriented centers around the experiential.  Even what were once seemingly mundane tasks require today’s savvier hoteliers, restauranteurs, and nightlife impresarios to provide moments presented in such a way that they are deemed worthy of inclusion on their patrons’ curated Instagram feeds.  Oftentimes these moments fly in the face of the rest of the stay/meal/whathaveyou; but every once in a while, someone gets it right, and all the pomp and circumstance (or bells and whistles, if you prefer), instead of being superfluous, flow congruently with the whole.  Such was the case when my sister and I had dinner at Red Plate – the new upscale Chinese restaurant at The Cosmopolitan of Las Vegas.

Ethan, our server-cum-table captain, proved to be both charming and knowledgeable, which turned out to be a double-edged sword (for him) because I was bombarding him with questions throughout the night.  Not only did he answer them all, but waited for me to write things down (and even spelled-out a few things for me).  So, in case you hadn’t picked up what I’ve been throwing down, the service at Red Plate is stellar.

Also, the décor is worth noting, before I let the food take over.  Eschewing the de rigueur red and gold interiors favored by so many Chinese restaurants, the silk-covered walls are done in shades of grey, with a silver-leaf ceiling, leather banquettes in a deep crimson, and some stunning Art Deco accents (I’m looking at you, stately wall sconces!); as well as some lovely authentic Chinese antiquities, and soaring arrangements of exotic flowers.  That Red Plate was opened to complement The Talon Club, The Boulevard Penthouses, and The Reserve (respectively, the resort’s high-limit gaming lounge, the whale suites, and those suites’ private gaming salon), simply underscores why such attention to detail was afforded to this restaurant.

Our meal was served in six courses and began with a tasting platter that included King Crab Spring Rolls served with Sriracha Aioli, Iberico Pork Potstickers served with Chef’s Special Shredded-Ginger Soy Sauce, and Caviar Taro Puffs with Quail Eggs served with Chef’s Special Duck Sauce.  The Spring Rolls were light and flakey, and wrapped around succulent pieces of King Crab that you dip in this piquant sriracha aioli; while the Potstickers were just delicious, thanks to both the delicate, acorn-flavored meat of the Pata Negra (aka the Black Iberian Pig), and the lilting burst of flavor from the Chef’s shredded-ginger soy sauce.  I can’t really speak to the Taro Puffs (as I’m a fan of neither eggs nor caviar), but Jess told me hers was great.  After these first few dishes, I was noticing something about Chef Yip Cheung’s cooking: He lets each of the flavors ‘speak’ for itself; something that can only be accomplished when using the very freshest and most premium ingredients.

Our second course was Whole Prawns in Supreme Soy Sauce and was presented as a single, giant prawn, cooked, sauced, and plated.  Advised to use our fingers, we did so with gusto, and while we made a God-awful mess (sorry, Ethan!), it was entirely worth it.  I don’t know what Chef Cheung puts in his soy sauce, but supreme it was, and it enhanced the already zesty flavor of the prawn.

Sweet Corn and Foie Gras Soup followed, and while it sounded a bit rich, it was really fantastic, and a tasty derivation from the Wonton or Hot and Sour soups I usually enjoy with a Chinese meal.

The showstopper, if there was one above all the rest, was the fourth course, a “Chef’s Creation” dish of Braised Short Rib.  At this point, I’m going to ask you to stop, and scroll-up to the slideshow, and find the photo of this dish; then scroll back down and resume reading.  First of all, this was like no short rib I’d ever seen, if for no other reason that it wasn’t at all short.  The meat having been meticulously cut from and then replaced on the bone, the bone (with meat) is placed in an earthenware vessel, over some incredibly hot rocks.  The sizzling sounds that accompany the Short Rib are not unlike those overheard when someone orders the fajitas at Chili’s; but it’s the accompanying smell that pulls you, like an olfactory siren’s song, to it.  Once tableside, Ethan drizzled some of the Chef’s Special Garlic Chili Sauce over it; and the steam, mixed with the rich flavors of the meat and the zestiness of the sauce, and I was momentarily swept-away, for an intoxicatingly heady moment.

To wit, the people seated on the other side of the screen from our table, heard and smelled the sounds and scents emanating from our table, and asked – through the screen, with heads turned sideways, and noses sticking through, mind you – what it was, and if they should get it (it requires a wait, if ordering a la carte).  Jess and I answered in unison, affirmatively.  Later, while I was photographing the private dining room, I heard their Short Rib being presented and thought “Good for them!”  Then, I heard laughing and found Ethan and Jess watching me walk dreamily, with my nose in the air, and my eyes half-closed, as if I were in a trance – just meandering along the same path the waiter had been moments earlier.

And while the evening’s Sturm und Drang played-out in the fourth course, it was the two parts of the sixth course that have stayed with me, for their amazing flavors.*  First came the Stir-fried Lobster with Lemongrass and Thai Sauce, that was presented at the table, before being prepared and re-plated, tableside, by Ethan.  I don’t know what Thai Sauce is, but in conjunction with the intense citrus notes of the lemongrass, that was one savory sauce for the lobster, which was tender and oh-so-succulent.  And then came the rice.  Now, you’re probably thinking “Hmmm.  Rice.  Whoop-dee-doo.” and normally I’d concur, but this Beef Fried Rice with Black Truffle was something special.  It wasn’t as oily as most fried rice, and as such, it wasn’t the congealed glob-of-rice so familiar to many.  Rather, the rice assumed the flavor of the beef and scallions, and once the black truffle was shaved over the top, it was all-systems-go.  Bonus:  I tried mixing some of the lobster in the rice, and it was scrumptious!**

Now, it was time for dessert (the seventh and final course), which was a Bird’s Nest Egg Tart.  I know it’s a Chinese delicacy that dates back some four centuries to the Qing Dynasty and is thought to be good for one’s health, so I ate it.  And while the consistency was a bit more gelatinous than I care for, it wasn’t gross (as I thought it would be) and kinda reminded me of Jell-O.  Noticing me futzing with my tart, Ethan asked if I’d like something else, and rattled off some flavors of homemade ice cream.  I was only half paying attention, but then I looked up, with a start.  “Did you say, ‘Thai Tea Ice Cream?’”  Well, ‘lo and behold, he had, and when he brought it, I saw my favorite beverage in the form of two frozen dark-orange orbs of sugary, caffeine-filled nirvana.

And with Chinese New Year right around the corner (Gong Xi Fa Cai, y'all!), you’d better go now; because the Year of the Pig begins in early February, and you likely won’t be able to get a table for, well, all the tea in China.

Get into it!
#RedPlate

[Editor’s Note: * The fifth course was Braised Tofu with Bamboo Fungus and Vegetables; and while completely wasted on me, it’s sure to ring some bells for those fungus-favoring foodies, out there // ** Throughout the meal, Jess sampled a quartet of specialty cocktails - the Four Pillars of Destiny, the Hundred Schools of Thought, the Festival of the Moon, and the Yin and Yang - that she assures me were as meticulously crafted as the food.  We also greatly enjoyed our King’s Tea service that utilized Premium Dark Oolong leaves.]