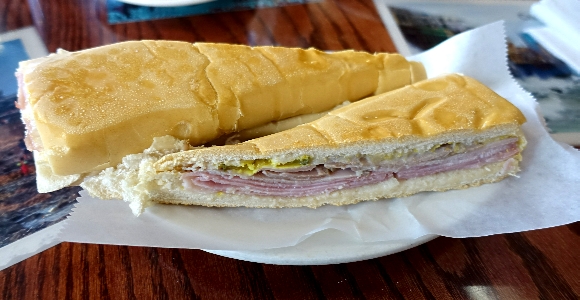 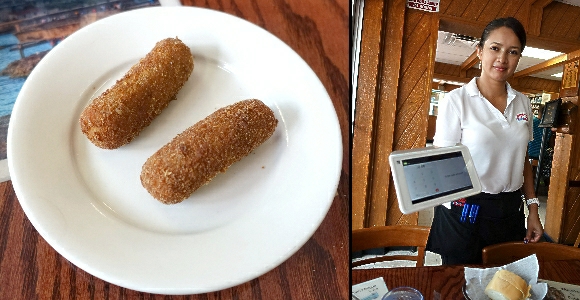 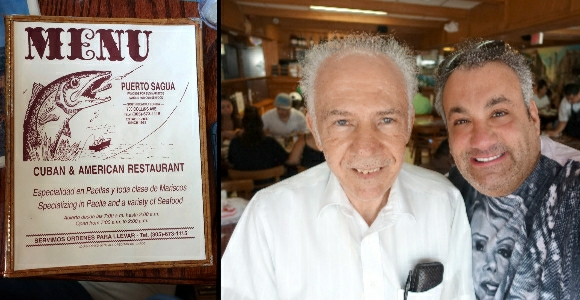 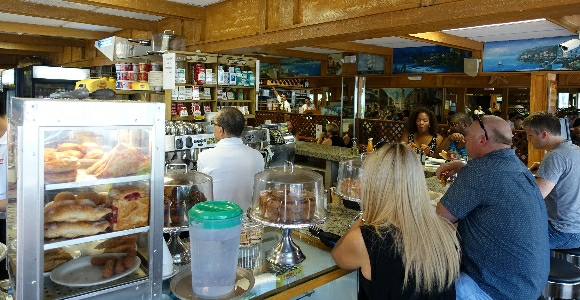 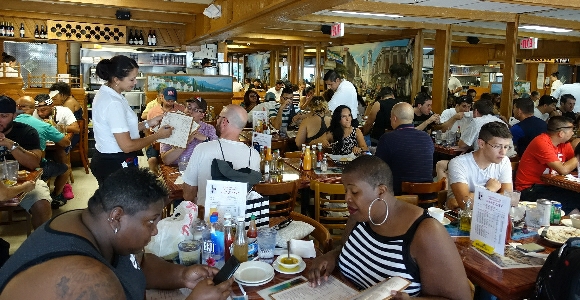 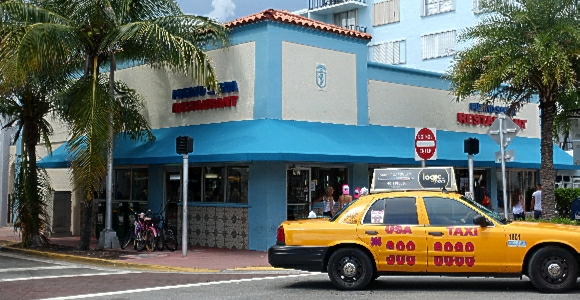 In Miami, for the first time in more than 30 years, I knew that I had to have an authentic Cuban sandwich.  So, when we were swimming off the back of a friend’s yacht, off of Key Biscayne, I asked my hosts – a saucy mix of Cubans and Jewbans – where I should go to experience this delicacy, I took it as a good sign when they all looked at each other, then yelled “Puerto Sagua” in unison.

The next day, while the rest of the group was indulging in some varsity-level day-drinking, I Uber-ed down Collins Avenue, and entered the aforementioned Puerto Sagua – the landmark Cuban-American coffee shop, that’s been serving the denizens of Miami Beach, since 1962.

On this slightly overcast Miami afternoon, the atmosphere at Puerto Sagua was bright and busy – kind of like the Carnegie Deli, but without the communal tables, and far less Yiddish being shouted about.  I was seated immediately, at a fantastic table, on the window, that allowed me the opportunity to gaze out at the passersby, flip-flopping their way down the avenue; while simultaneously observing my fellow diners.

Deciding to get my grub on, I dove right in, ordering a Café con Leche con Hielo (Iced Cuban Espresso with Ice), both to put a little hitch in my giddy-up (in addition to making me sweat like crazy, that Floridian humidity was like atmospheric Valium), and to rehydrate.  Now, with a little fuel in my tank, I ordered a couple of Croquetas and the Sandwich Cubano Grande.

The Croquetas were flavorful, fried bits of breadcrumb-covered goodness (each roughly the size of a mozzarella stick), that managed not to be at all greasy.  Not sure how they managed that, but bravo!

The headline, though, was definitely that large Cuban sandwich.  First of all, the bread is something akin to a Cuban baguette but is fluffier and sweeter than its French cousin.  The insides of the sandwich are of layers of ham, Swiss cheese, roast pork, pickles, and mustard.  Once assembled, the sandwich is sliced on the bias, to create two triangle-shaped halves.

According to the cook, the preparation is as follows:  You slice the baguette in half, lengthwise.  Spread a tablespoon of butter on one half of the bread, and spread the mustard on the other.  Layer the ham, roast pork, Swiss cheese, and pickles on the bottom half; and place the top of the baguette, on top.

Then you place the sandwich in a skillet with butter, and flatten it with a spatula (or another skillet); where you cook it, for 30 seconds.  Then you flip it over, and cook it until the bread turns golden and the cheese is melted.  Then you cut your sandwich in half and put it on a plate.

I know it’s a bit sacrilegious, but I ordered a side of mayo and spread a light layer on the inside of the baguette, where it mixed nicely with the melted butter.

After my delicious lunch, I asked Felix Ribero (who’s owned Puerto Sagua, since purchasing it in 1965) what the best thing is about owning a restaurant that’s been around for more than fifty years.  Without missing a beat, he looked at me with twinkling eyes and said, “That we’re still here, after fifty years.”

You can’t argue with that!