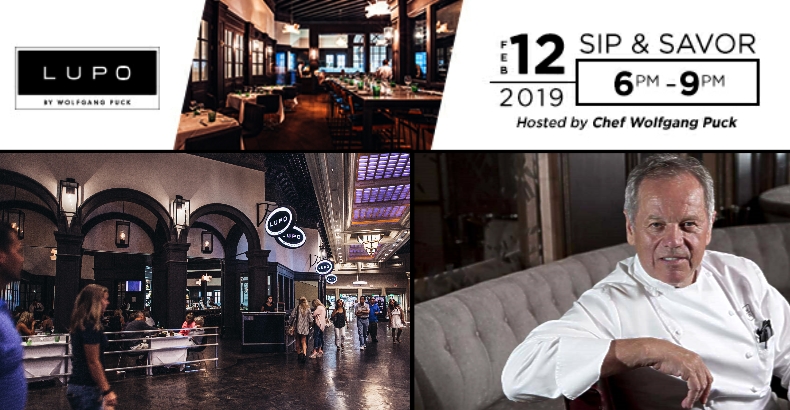 At 6pm, on Tuesday, February 12th, it’ll be time, once again, for what’s become one of my favorite philanthropic foodie fêtes.  That’s right, y’all: Wolfgang Puck is back to host the seventh edition of his annual Sip & Savor soirée!  And this year the friendly folks from Wolfgang Puck Fine Dining Group have relocated the evening – as always, a fundraiser for Keep Memory Alive – to LUPO by Wolfgang Puck, at Mandalay Bay Resort & Casino.

This year, in a nod to the host restaurant, guests will note a festive Italian Street Fair vibe; while the menthol Kool musical stylings of yours truly are piped-in to each nook and cranny of LUPO’s lush, dark wood-walled interiors.  Live-action stations from the various restaurants and division of WPFDG’s Las Vegas enterprise will be set-up throughout the restaurant; with each offering a sumptuous array of fresh dishes, many made-to-order.

There’s gonna be handmade breads and pastas, and a pizza demonstration by WPFDG’s Executive Chef, Dustin Lewandowski (who knows how to throw some dough, yo).  Roast Suckling Pig?  Sure!  (It is The Year of the Pig, after all.  And Gong Xi Fa Cai, while I’m at it!)  Seafood Risotto and Basil Pesto stations, too?  You betcha!  And let’s not forget the Fresh Mozzarella station or the Garden Bar with pickled farmer’s market veggies and crisp salads.

And while I hate to single out any particular chef from this absurdly talented group of gastronomes; I think everyone can, will, and should agree that any affair that ends with an array of sweet treats created by Executive Pastry Chef Kamel Guechida and his team of magical elves is one you leave with an enormous smile on your face.  And since Chef Guechida has opted to top-off the sure-to-be impressive assortment of freshly baked pastries, granitas, and Italian nougat with a Cannoli, Italian Ice, and Gelato Bar; I’m already smiling so hard, my cheeks hurt.

And for those of you eager to get your sip-on, Wolf’s got you covered.  Twenty wineries are partnering with Puck et al., and in addition to the bounty of vintages availed to you, there’s gonna be a Campari-sponsored Interactive Ice Lounge featuring a Negroni bar, an Amora tasting bar, some house-made Limoncello, and too much more to list herein without spraining my liver.

Tickets for the seventh edition of Wolfgang Puck’s Sip & Savor are available at two levels.  General Admission tickets are $175 each; while VIP tickets are $225 each.  And while both include complimentary valet (at Mandalay Bay’s West Valet), the VIP tickets allow one the privilege of attending the VIP Reception and taking a tour of the LUPO kitchen, not to mention meeting-and-greeting with Wolfgang Puck, himself.  And best of all, the monies raised will go to benefit Las Vegas’ own Keep Memory Alive.

I’ll see y’all, there.  And don’t even consider not stopping by the DJ booth, and saying “Hi!”

[Editor’s Note: An organization that Chef Puck has been supporting and promoting – both personally and professionally – from its inception more than two decades ago, Keep Memory Alive is a Las Vegas-based organization that exclusively supports Cleveland Clinic Lou Ruvo Center for Brain Health, and its mission to seek cures for memory disorders, and to provide support for patients as well as their families and caregivers.]