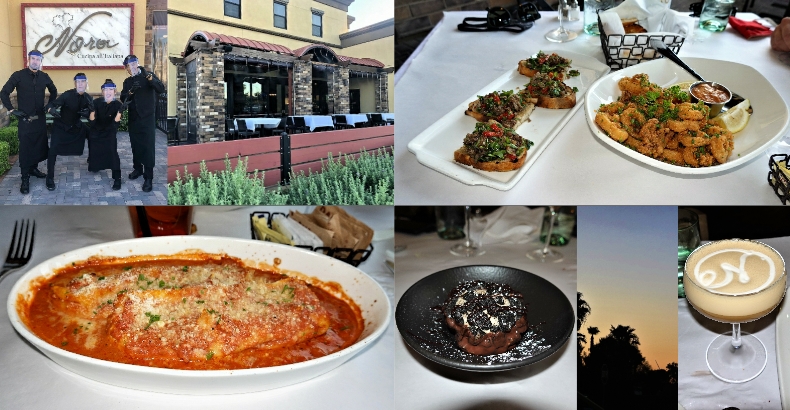 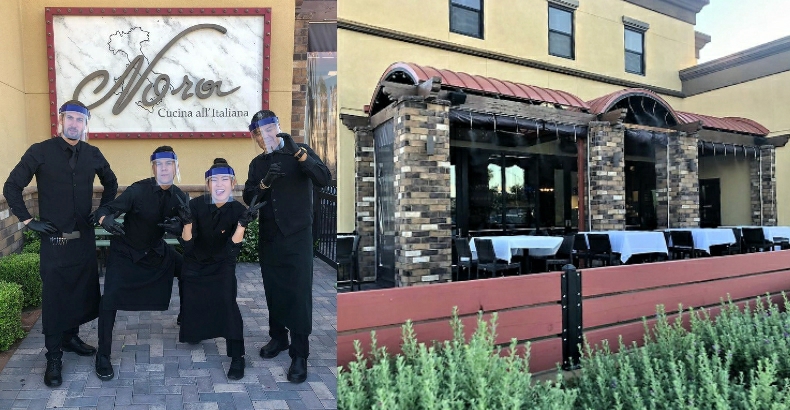 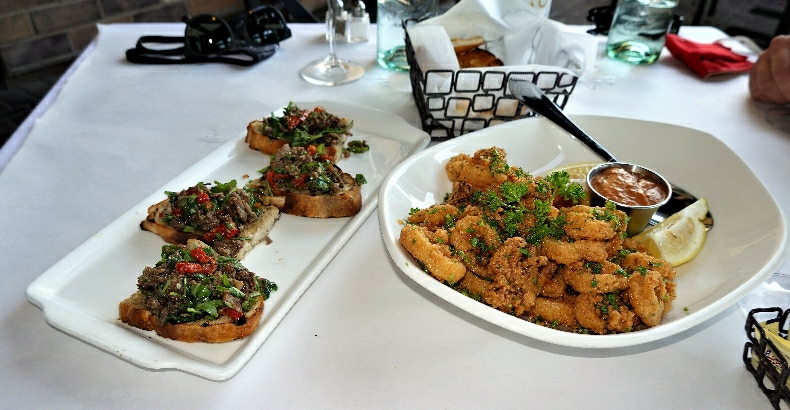 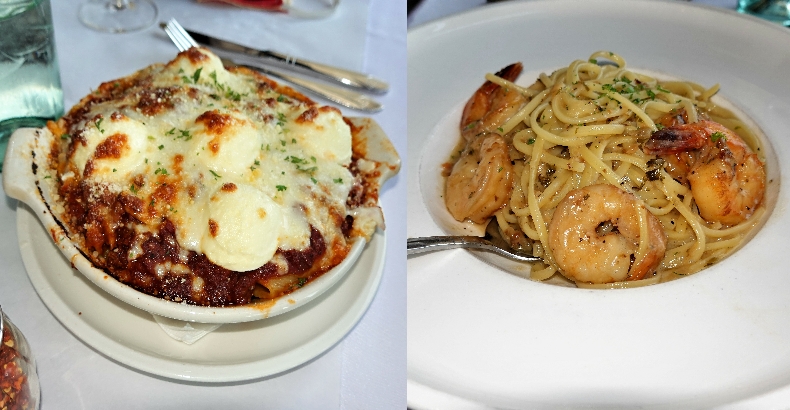 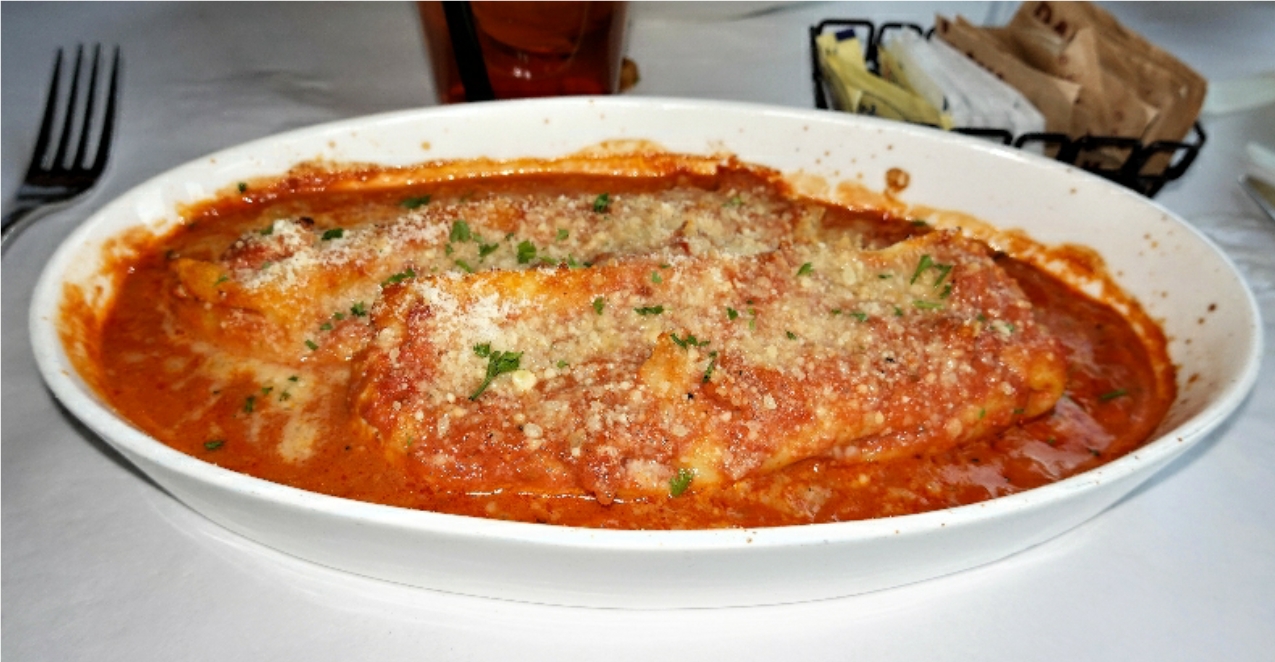 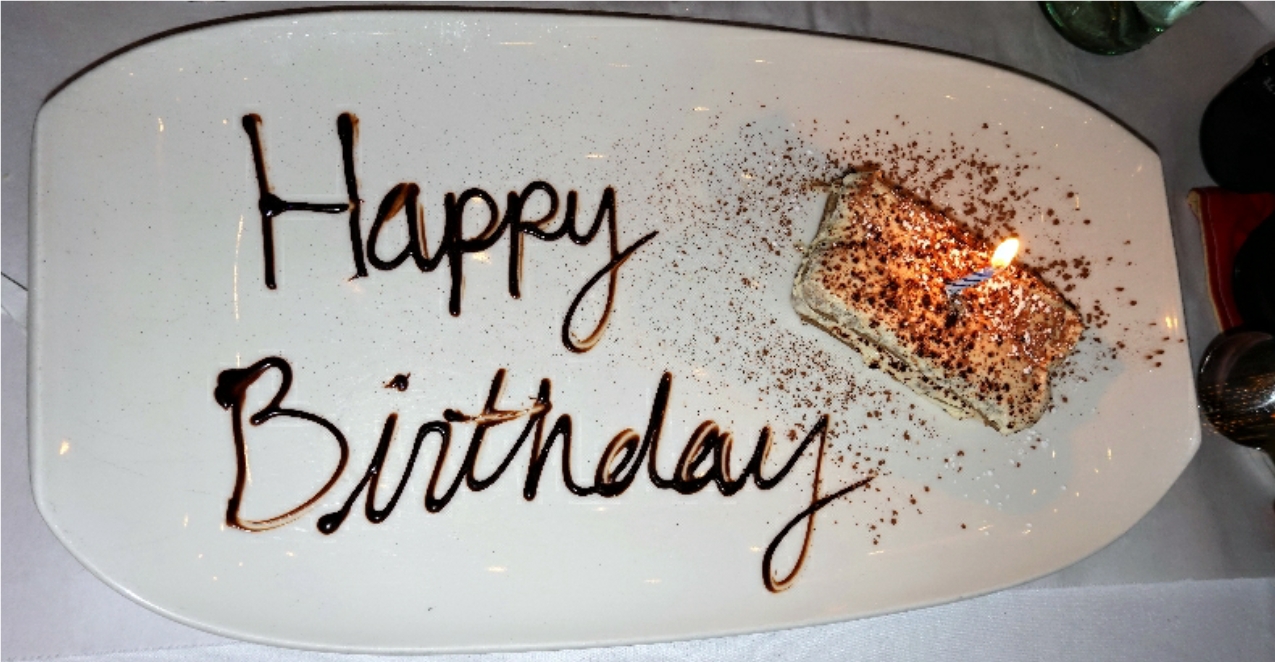 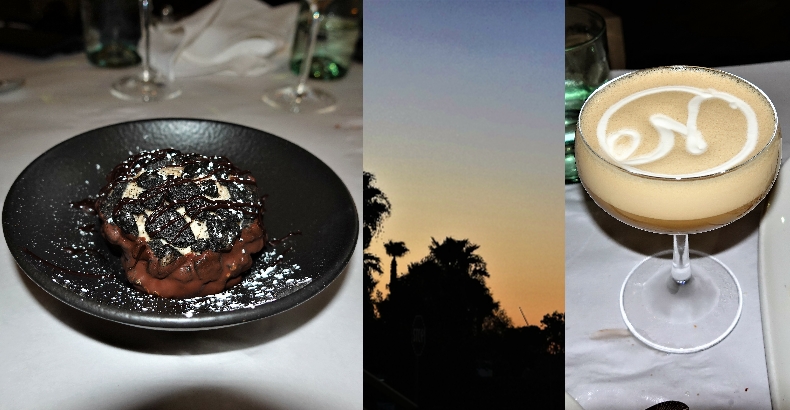 In 1991, when yours truly was heading off to college, Nora and Gino Mauro were opening Nora’s Cuisine, an intimate 12-seat Italian restaurant, that—due to its consistently crave-worthy cuisine and friendly atmosphere—expanded and relocated (a mere 900 feet due east), in 2016, taking over the space on West Flamingo Rd between South Jones Blvd and South Lindell Rd.

I’d been a fan of Nora’s, but hadn’t been to the then-new location, until my friend Sophia took me there, for their mouth-wateringly delicious Al Prosciutto Pizza (with garlic, oregano, parmesan cheese, arugula, tomatoes, prosciutto, and mozzarella).  I seem to recall us ordering and enjoying other things, but it was the pizza that really made an impression.

Recently, looking for a restaurant where I could take my dad for Father’s Day, I did an online search for restaurants in the southwest part of town with outdoor seating.  When Nora’s Italian Cuisine appeared in the search, I figured we had a winner.  And boy, did we.  The patio was spacious, and the tables were placed a suitable distance from each other, in keeping with Nevada’s current safety protocols.  As for the food, it was even better than I’d remembered.  To wit, I ordered that Al Prosciutto Pizza, again, and it did not disappoint.  Furthermore, my father and stepmother told me that their Salmon Piccata (with capers, lemon, and spinach) and Grilled Branzino (Mediterranean sea bass, arugula, and assorted sea salts) were both excellent.

So, a couple of weeks later, when deciding on a place to take my friends, Sean and Alan, where we’d be toasting Sean’s birthday, I once again selected Nora’s, and again, everyone had a delicious meal.  Having requested a table on the patio, I was once again seated under the overhang, in the shade (as is my preference), looking out at the other outdoor tables on the patio, as well as those in what used to be the restaurant’s bocce court.

Nora’s is all about the PPE for their employees, and I’m pleased to note that I didn’t see a single guest who didn’t wear a mask when not eating, whether at check-in, being shown to a table, or walking to/from the restroom.  It makes eating far more relaxing when everyone goes with the flow, to prevent the spread of the coronavirus.  Nora’s has even gone so far as to put suitably distanced stickers on the floor instructing guests where they should stand while waiting to be seated.  Thanks, Nora’s!

We started with the Garlic Bread (I say “we,” when in actuality I ate most of it, though I’m pretty sure Sean and Alan each had a piece…), the Calamari Fritti (lightly floured and fried, with chilled tomato and caper sauce), and the Steak & Arugula Bruschetta (with sun-dried tomatoes and lemon vinaigrette).  I’ve never been a huge fan of capers, but that sauce was a delightful accompaniment to the calamari; while the bruschetta was juicy and full of flavor.

The birthday boy went with the Pasta al Forno (with meat sauce, ricotta, and mozzarella), and raved about it [per Sean: “It was exactly what I’d been expecting and more,” noting that “the meat sauce has a special, hearty taste.”]; while Alan opted for the Shrimp Scampi (with linguini, aglio e olio, and white wine) which also received praise for its “creamy/buttery” quality and the “healthy portion” of shrimp.  At one point, I looked over and noticed that Alan had eaten all of the shrimp, but had left much of the linguini, so I asked if everything was alright.  He responded that his long-established method for eating pasta was enjoying it until he’d eaten all of the accompanying protein, and then calling it a day.  Then, just as I was about to make a comment about how this must be part of the reason that he’s in such good shape, his husband looked up, and ever-so-sweetly inquired “Since when?”  [I laughed so hard, I nearly peed my pants!]

Me?  I decided on the Veal Cannelloni alla Vodka (with ground veal, fresh pasta, ricotta cheese, mozzarella, and tomato cream sauce).  It was rich, yummy, and cheese-y, while the filling was light and seasoned beautifully.  All told, it was exactly what I wanted.

Since we were celebrating, dessert was in order, and I’ve gotta hand it to Nora’s because while I’d said it was a birthday when I made the reservation, I’d neglected to ask for a special dessert.  So, when Sean ordered a Cappuccino Martini, I jokingly asked our server if she could affix a candle to the side of the glass.  Then, when she delivered the desserts—an Oreo Tartufo and a Tiramisu—the tiramisu was on a large plate upon which the kitchen had written “Happy Birthday” in chocolate.  And yes, there was even a candle in the tiramisu!

I’d be remiss were I not to give special props to the Oreo Tartufo.  It was fan-friggin-tastic!  It was so good, in fact, that since that night, Alan has been sourcing Oreo Tartufo recipes online, and promised to invite me over for his second attempt at making it.  Why the second?  Because he’s a perfectionist and wants to ensure he gets it right before duplicating the effort.

Long story longer, if you’re looking for classic Italian dishes, in an off-Strip restaurant that not only practices strict COVID protocols but also features a lovely outdoor dining area, then I highly recommend you take a look at Nora’s Italian Cuisine.  Buon appetito!!