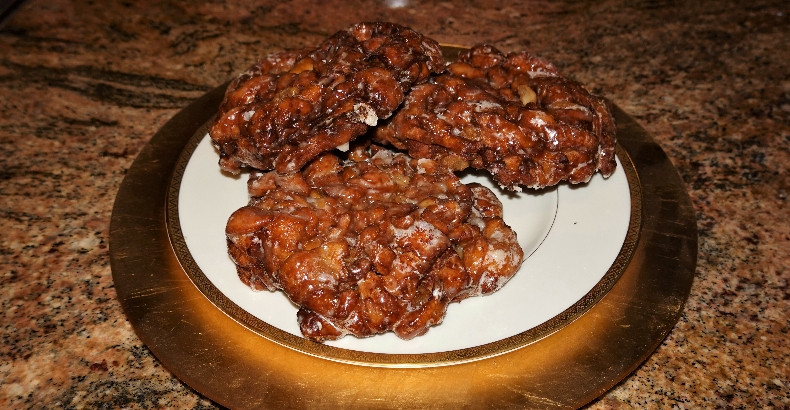 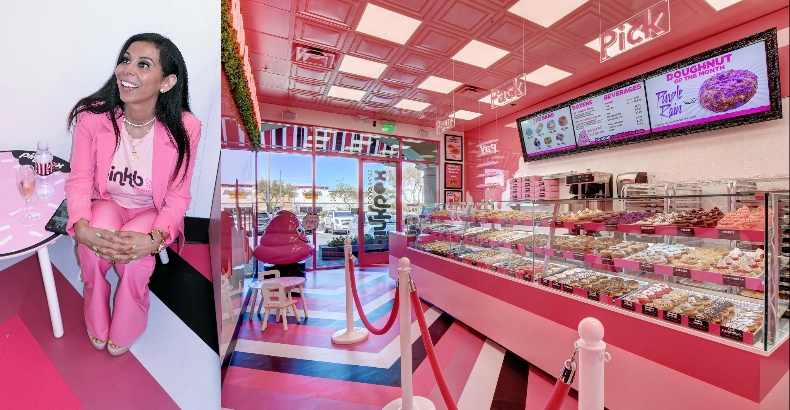 Seeing as fried foods comprise the base of my food pyramid, I have more than a passing familiarity with the delectable treat that is the Apple Fritter; so, when I found an absolutely incredible Apple Fritter—in my neighborhood, no less!—I was pretty psyched.  But before I get into that, let’s look at what a fritter actually is, as well as the origins of this American favorite.

Etymologically speaking, the word “fritter”—like the words “fricassee,” “frittata,” and “frizzy”—comes from the Latin “frigere” (to roast or fry), by way of the Anglo-French “friture,” which in Middle English became “fritour.”

As for the food we know, today, as fritters—simply put, any food items that’ve been covered in dough and fried—they have a far more interesting evolution.  In 160 BC, the Roman senator and historian, Cato the Elder, wrote De Agri Cultura* and mentioned Scriblita, a Roman dessert precursor to the fritter and the doughnut, that involved frying-up some dough, in hot fat.  Later, in Medieval times, someone was inspired to sprinkle sugar on top of his scriblitas and called them Cryspeys.  Meanwhile, over in India, Pakoras (also known as Bhajiya) had been all the rage for centuries, when, in the late 16th century, Portuguese and Spanish ships—having stopped in India on their way to Asia—brought the batter-frying technique to Japan, where it evolved into Tempura.  The Greeks love their Loukoumades, while the French and Italians respectively swear by their Beignets and Bignes.  And it’d be criminal to overlook Italy’s Fritto Misto.

But, when it comes to the Apple Fritter, we must go back to the England of the Late Middle Ages.  There, in roughly 1390, the master cooks for the court of King Richard II, compiled what we now know to be the oldest written compendium of recipes in the English language, The Forme of Cury. The recipe for “Fritters of Apples and Root Vegetables” found in The Forme of Cury is most likely the same version that was served at the feast thrown by Lord Spencer in 1397, to honor the marriage of King Richard and Queen Isabella, the year before.**

Today’s Apple Fritters—fluffy on the inside, with the crispy outside coated in a sweet vanilla glaze—tend to be made with apple cider and chopped apples; though there is some dispute over whether they are ‘better’ when baking powder is used instead of flour.  I’m not sure which is used by the bakers at Pinkbox Doughnuts, but when they opened their South Summerlin location, just up the road a piece from my house, I became very taken with them, almost instantaneously.  Here’s the skinny.

You see, I was in the process of driving home, one afternoon, and remembering that Pinkbox Doughnuts was opening just up the road, decided to make a pitstop.  Upon entering, proprietor, Judi Siegel (who had bought the company from founder Roberto Armanino, in 2018, with her husband, Steve) suggested I try the Apple Fritter.  So, I did.

As I was driving home, I picked up one of the Apple Fritters, and as I simultaneously took a bite and inhaled deeply, I could both taste and smell that when Judi had told me that Pinkbox makes their fritters and doughnuts fresh each day, by hand, from the highest quality ingredients, it wasn’t just entrepreneurial propaganda, but was totally legit!  Whether the cinnamon, the apples, or the butter, you can taste and smell each distinctively, and I’ve gotta tell ya, it’s pretty friggin’ divine.

According to Siegel, when she was growing up, she “…always picked the Apple Fritter, as a kid.”  Nowadays, as a mother herself, she still finds herself going straight for the Apple Fritter, because “…it gives me this warm, nostalgic feeling.  And they just taste so good!”

As Estelle Reiner so memorably deadpanned, in the famous Katz’s Delicatessen scene from When Harry Met Sally… (1989), “I’ll have what she’s having.”

[Editor’s Notes: * Cato the Elder’s De Agri Cultura (literally Concerning the Cultivation of the Field) is the world’s oldest surviving work of Latin prose // ** The former Isabella of Valois was only 6-years old at the time of her marriage to Richard II; and became a ten-year-old widow upon his death, four years later.]