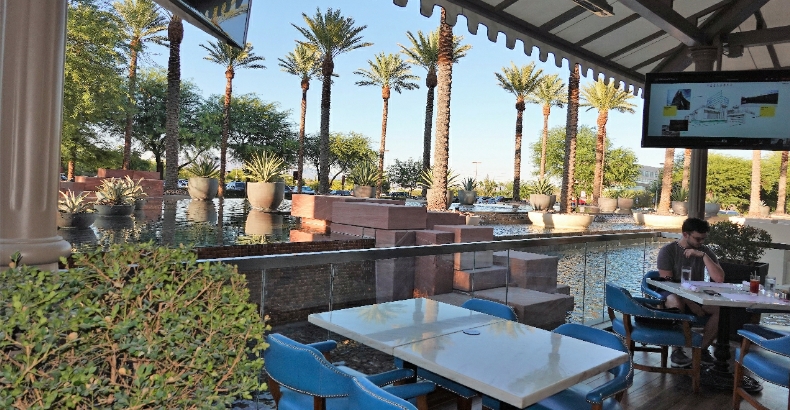 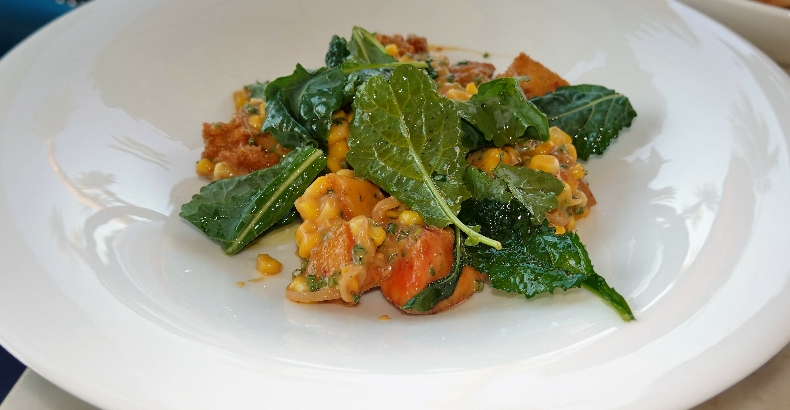 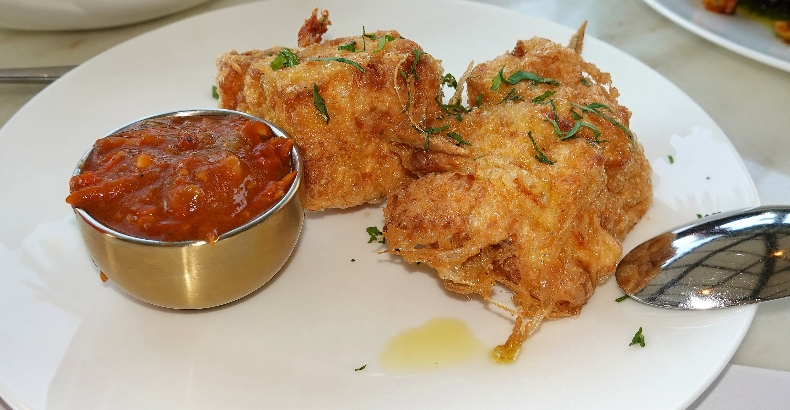 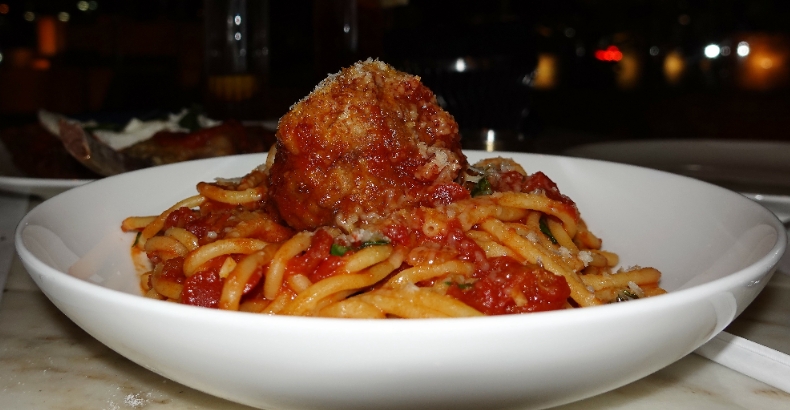 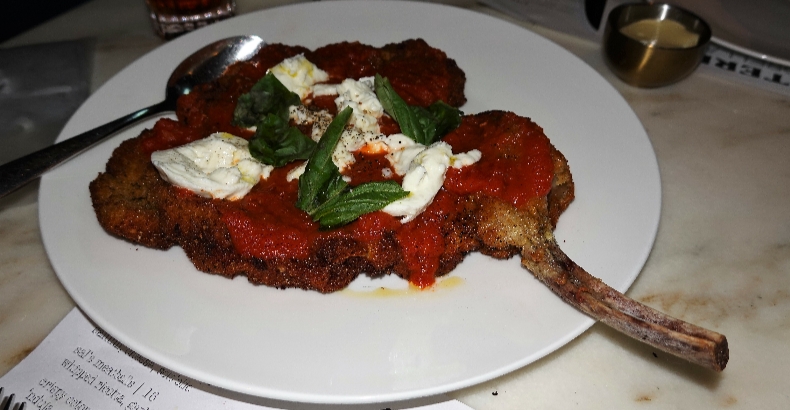 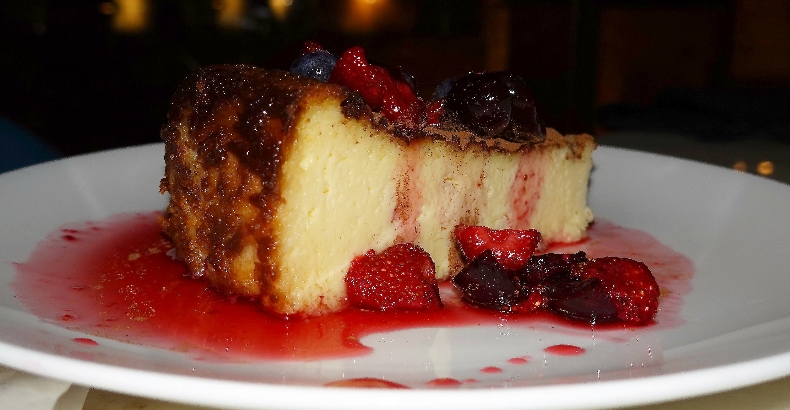 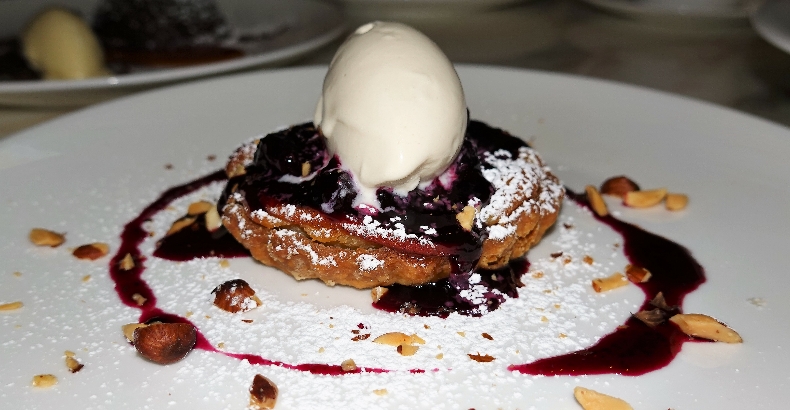 ‘Round these parts—where dining al fresco, while de rigueur, can be restrictive under the intense summer sun—it’s all about finding a place with copious amounts of shade, some powerful overhead fans, and maybe a misting system.  And, if there’s a lovely water feature, so much the better!

So, when I realized that Marc Vetri’s Osteria Fiorella at Red Rock Resort had segued from seasonal pop-up [it opened as such in July] to permanent gourmet room, I knew I’d be remiss were I not to check it out.  As it turns out, after my recent visit, my only regret is that I hadn’t ventured sooner to this delicious desert outpost of Fiorella, the popular pasta bar that Vetri opened this summer, in his hometown of Philadelphia.

Once we’d been seated at a table at the edge of the fountains that greet visitors entering Red Rock Resort via the casino entrance (our hostess, Destiny, teasingly referred to it as “lakeside” seating), and were sipping on our refreshing Spritz Venezianos (with Aperol, Prosecco, wild strawberry, and tangerine), we took some time to look out at the beautiful surroundings, while giving our menus a look-see.

Thanks to a knowledgeable assist from our server, Shannon, we dove into a multicourse journey through Italian summertime fare, and it was pretty special.  First came the antipasti and salad courses, beginning with the Fried Mozzarella Carrozza, Crispy Octopus (with ‘nduja, potatoes, and olives), Fried Calamari (with agrodolce sauce), and the Panzanella (with grilled summer corn, peaches, and crispy sourdough).

Some might think ordering both the Crispy Octopus and the Fried Calamari would be akin to a culinary redundancy.  Those people would be mistaken and would be missing out on the wonderful texture and flavor of each.  Meanwhile, the Fried Mozzarella Carrozza came with this terrific sauce of anchovies, olive oil, and blistered cherry tomatoes.  The highlight of this course, was the Panzanella, thanks in great part to the dressing in which the traditional Tuscan summer salad is tossed; a vinaigrette that—according to Executive Chef Joel Myers—is made by roasting some peaches in the restaurant’s pizza oven, and pureeing them with the juice of some pickled shallots.  This dish is what I imagine “summertime” tastes like.

Next came the pizzas with the Maurizio (with mozzarella, parmigiano, fontina, rosemary, and olive oil) and Parma (with fontina, mozzarella, arugula, and prosciutto di Parma DOP) pizzas; and the pasta, the Bucatini (in a sauce of San Marzano tomatoes) with one of Sal’s Meatballs, on top.

The pizzas were great.  They got the crust right (which is really the trickiest part), and the toppings were fresh and flavorful.  I really enjoyed the Bucatini [a thick spaghetti-like noodle with a hole through it] and learned—again from Chef Myers—that in order to achieve the sauce’s sweet flavor, Bianca DiNapoli San Marzano tomatoes are required.  Apparently, unlike at the pharmacy, when it comes to food preparation, brand is always better than generic!

Now, to be fair, we’d already had a pretty big meal; but we persevered, and I’m pleased to report that it was completely worth it.  And a big part of that was due to the entrée, the Veal Chop Parm.  Pounded, breaded and seasoned, cooked on the restaurant’s woodfired Josper Grill, served on the bone, covered in a sauce made from more of those Bianca DiNapoli San Marzano tomatoes, and topped with thick slabs of bufala mozzarella, the Veal Chop Parm isn’t just good at dinner (as you’d expect); but I’m here to tell you that it’s just as good at 4am, straight out of the refrigerator, eaten right off the bone.  [That’s right, Mom: No utensils.  No plates, either.  It’s one step away from Sodom and Gomorrah!]

And really, that should’ve been that.  And that would’ve been wonderful.  But then the dessert menus were presented, and a third wind was found (or maybe it was our fourth wind?), and we went for it with a quartet of desserts that I won’t soon forget.  I was pretty bowled over by how much I enjoyed Jenny’s Old School Ricotta Pie.  I’m not a fan of ricotta cheesecakes, and that’s immediately where my mind went.  Then I tasted it, and before I knew it, I’d “tasted” almost half of what was a pretty hefty slice.  Word on the street is that this was Chef Vetri’s grandmother’s recipe, so hats off to Grandma Jenny!

And while I’m toasting the creators of desserts, I’ve gotta give it up to Chef Ashley Costa, Osteria Fiorella’s amazing pastry chef.  I mean, the Peach + Blueberry Tart was great, but the Wild Honey Gelato on top was sublime.  I know I’m prone to proselytize about the things I like (because otherwise, what’s the point?), but if I got word that Red Rock was opening a pop-up gelato window featuring Chef Costa’s handiwork, I would get in my car, and drive my lazy ass over to Red Rock, to get a pint or five.