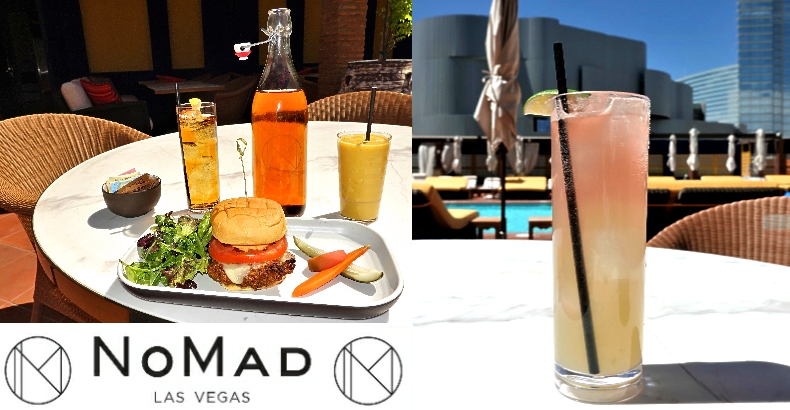 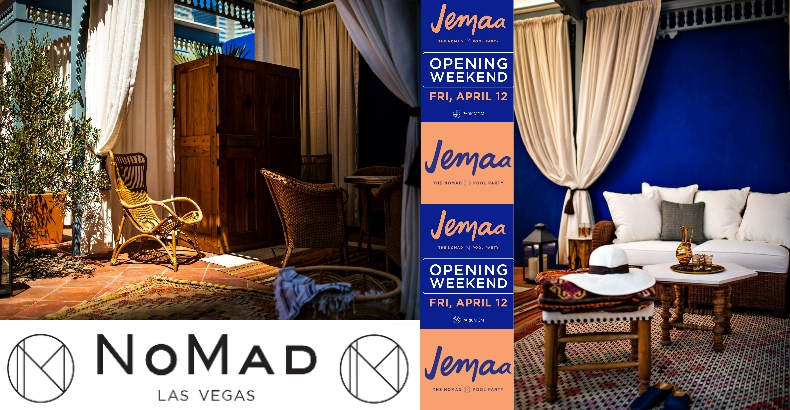 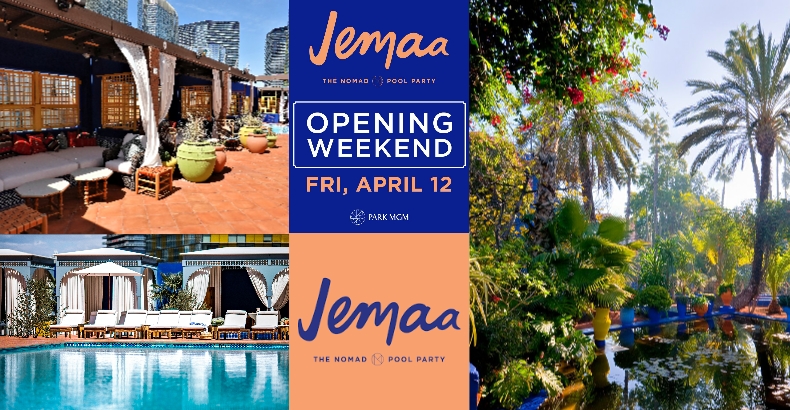 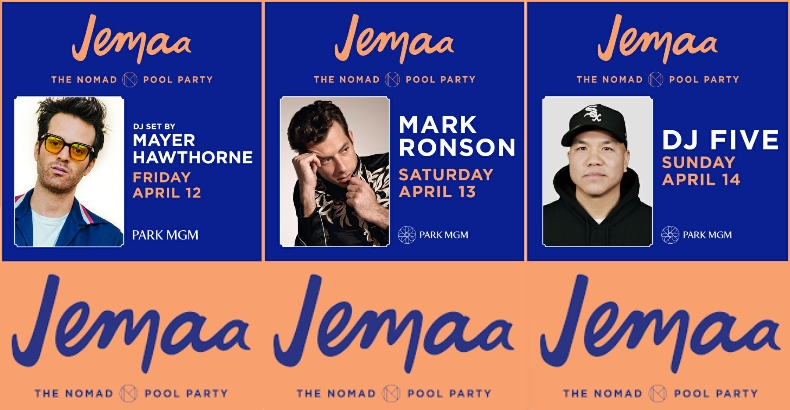 A branded pool at a Las Vegas resort.  Now, I’ll bet your first thought (like mine) was “Whoop-dee-doo,” because ‘round these parts we’ve become more than a teensy bit jaded about things like pools and dayclubs, and even those pool and dayclubs that become nightclubs after the sun goes down.  We’ve seen ‘em, we love ‘em, and we’ve raved ‘til dawn at the lot of em.  But in a town where the rule of bigger-is-better has gone unfettered for so long, the time was ripe for the folks from Make It Nice to apply their award-winning brand of hospitality to the Las Vegas pool scene, as they have with the NoMad Pool at NoMad Las Vegas (a self-contained boutique resort within the Park MGM complex).

Décor:  If you were to ask me (as someone did, recently) which exotic locale I’d most like to revisit, I wouldn’t need to hesitate, as the answer has remained the same since I first stepped foot in Marrakech, nearly thirty years ago.  Needless to say, when I saw that NoMad honchos Will Guidara and Daniel Humm and Sydell Group’s Andrew Zobler had entrusted French designer Jacques Garcia to create a rooftop homage to the Moroccan city’s incredible Jardin Majorelle — famous both for its use of bold primary colors (most notably, its namesake Majorelle Blue, a deep, intense ultramarine cobalt hue) in the midst of the so-called Ochre City; as well as for being the home of Yves Saint Laurent and Pierre Bergé from 1980-2008 (and where YSL’s ashes were scattered upon his passing) — well, I knew I was gonna love it.  And I do: I really do.

Victuals:  I started with the Smoothie (mango, passion fruit, banana, and almond milk) which was pretty delightful.  Then came my Fried Chicken Sandwich (hot paprika, cabbage slaw, and ranch dressing), which was zesty and crispy and moist, which is exactly what I was hoping it would be.  As for the rest of the culinary offerings, the menu keeps to Brunch-All-Day theme, you can nibble on such brunchtime NoMad faves as Fava Bean Hummus, Avocado Toast, and the Breakfast Burrito (stuffed with eggs, suckling pig, potatoes, spinach, and chile de Arbol).  Or, you can stick with the marine theme and opt for the not-usually-found-poolside options from the seafood menu, such as Scallop Ceviche, Salmon Salad, the Lobster Roll, and a daily offering of Oysters with Champagne Mignonette.

Cocktails:  I’m an iced tea guy, and this day was no different; however, I figured I’d be remiss were I not to indulge in one of the potent potables crafted by NoMad’s award-winning bar director, Leo Robitschek.  So, I ordered myself an El Tucan (Mezcal, Génépy, celery, grapefruit, lime, and salt).  Described on the menu as “a Paloma's more tropical cousin” this layered cocktail doesn’t only look pretty on the Instagrams, but its smoky flavor and dry finish make for one exquisitely refreshing cocktail.

Ambiance:  The midweek vibe was very languid and lounge-y, and the music (a delicious mix of reggae and acid jazz) was ideally suited as such.  This Friday, though, brings the debut of JEMAA-The NoMad Pool Party (itself named for Jemaa el-Fna, Marrakech’s main square, adjacent to the souk).  There, on Fridays, Saturdays, and Sundays, in conjunction with the team from MGM Nightlife & Events, JEMAA will offer a curated roster of musical talent that will often jibe with the artists and DJs appearing at Park MGM’s speakeasy and club, On The Record.  Getting things started, this weekend will be Mayer Hawthorne (Friday), Mark Ronson (Saturday), and DJ FIVE (Sunday); while this summer will bring sets from the likes of Questlove and Masters at Work.

Is it possible to raise-the-roof at an outdoor venue?  I’ll let you know, next week.