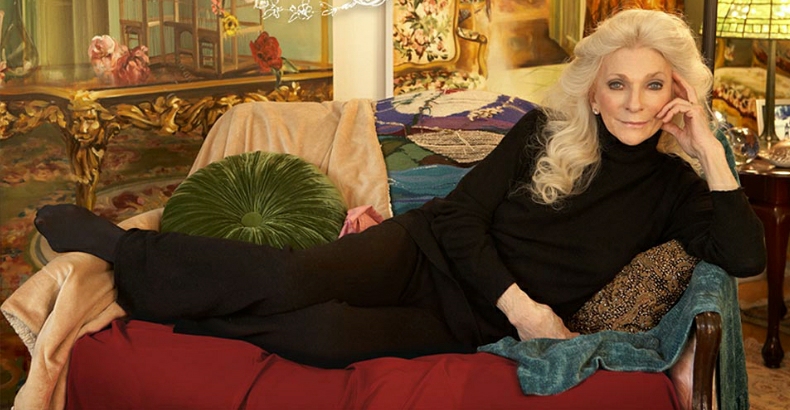 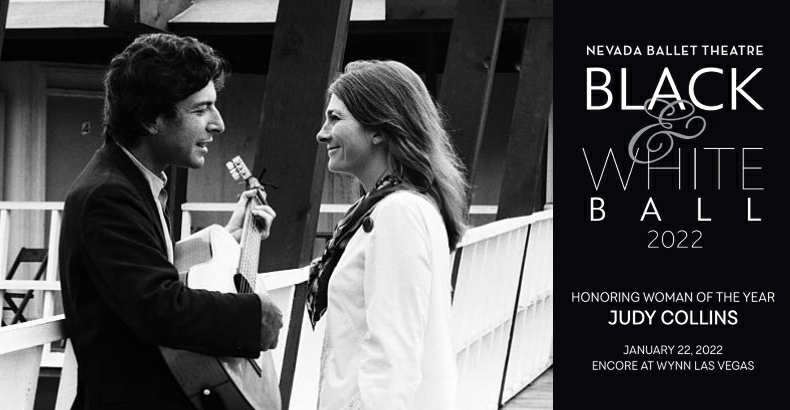 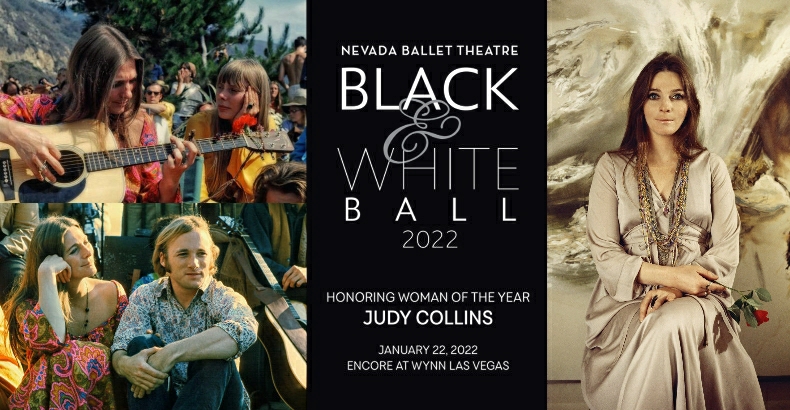 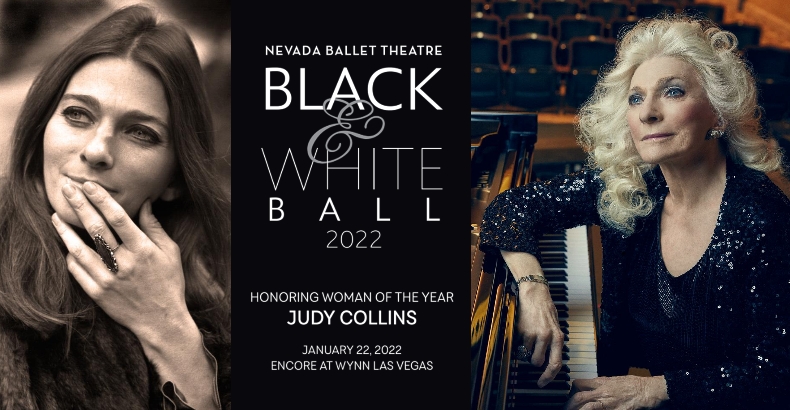 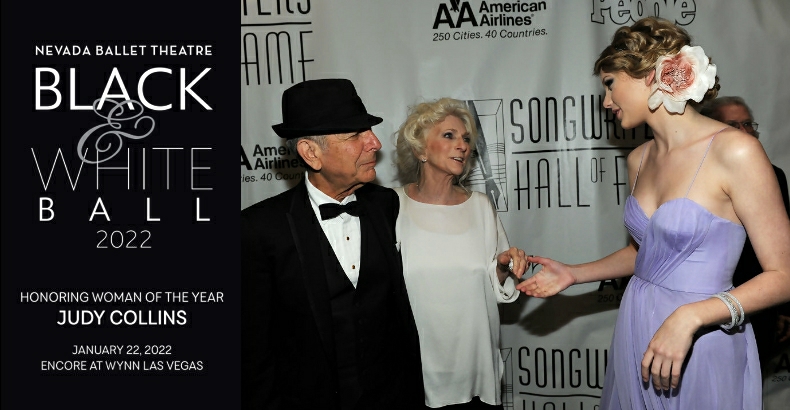 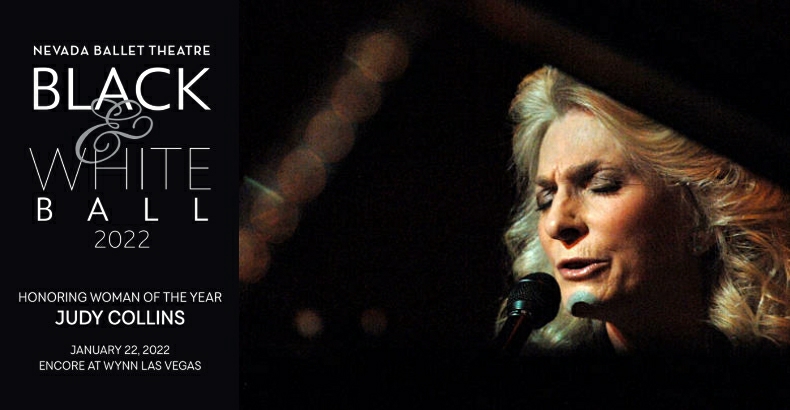 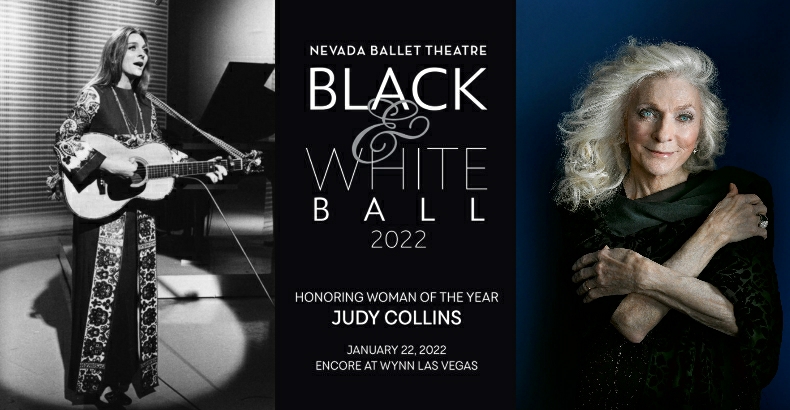 Ask yourself: What do legendary songwriters Joni Mitchell, Randy Newman, and Leonard Cohen all have in common? Answer: Before releasing their own versions of songs that would set them on their respective paths to fame and fortune, those songs were recorded and released by Judy Collins.

Now, Collins, the Grammy Award-winning singer, songwriter, musician, actress, and Academy Award-nominated director (!), will be honored as “2022 Woman of the Year” at Nevada Ballet Theatre’s annual Black & White Ball, on January 22, at Encore at Wynn Las Vegas; and, chaired by Todd-Avery Lenahan & John Gorsuch and Dawn & Christopher Hume, it will no doubt be a night to remember.   Collins, a living American treasure blessed with perfect pitch and a remarkably clarion soprano voice, established her bona fides during the late Sixties, singing beautifully arranged covers of songs by then-emerging songwriters in her crystal-clear voice.  As Amanda Hess wrote in her feature about Collins in The New York Times, “best known for singing other people’s songs, she sang “Both Sides, Now,” by Joni Mitchell, and she made Joni Mitchell famous. She sang “Suzanne” by Leonard Cohen, and made Leonard Cohen famous.” *

Collins won the GRAMMY in 1969 for “Best Folk Performance” for her recording of Mitchell’s “Both Sides, Now”—the song charted in 1968, a year before Mitchell would release it on her album, Clouds—and was nominated in the same category, the following year, for her recording of Cohen’s “Bird on the Wire” (though that award, ironically enough, was won by Mitchell, for Clouds).

Her 1970 a cappella recording of “Amazing Grace”—the hymn penned in 1772 by the English poet and clergyman, John Newton—was deemed by the Library of Congress to have been so “culturally, historically, or artistically significant,” that in 2017 it was selected it for preservation in the National Recording Registry.

Then, in 1974, Collins and Jill Godmilow directed Antonia: A Portrait of the Woman; a documentary detailing the gender bias faced by conductor Antonia Brico. Antonia: Portrait of the Woman was nominated in the category of “Best Documentary Feature” at the 47th Academy Awards; and was selected in 2013 by the Library of Congress for preservation in the National Film Registry, as (like her recording of “Amazing Grace”) it was found to have been “culturally, historically, or aesthetically significant.”

Collins’ biggest hit came in the form of her lush cover of Stephen Sondheim’s “Send in the Clowns—from his 1973 musical, A Little Night Music—that charted in 1975, earned Collins the fifth of her six GRAMMY nominations (for “Best Pop Vocal Performance, Female”) and won Sondheim the GRAMMY for “Song of the Year” in 1976, before charting again, in 1977. **

And let’s not forget that, in 1969, one of the breakout hits from Crosby, Stills & Nash’s eponymous debut album was the Collins-inspired “Suite: Judy Blue Eyes”; penned by her then soon-to-be-ex-boyfriend, Stephen Stills (the two have remained friends, and toured together in 2017). ***

In the words of Nancy Houssels (co-Founder/co-Chair, Nevada Ballet Theatre), Collins was a natural choice to receive NBT’s annual honorific, because she “…is a bona fide superstar who has spanned the generations and continues to enlighten, entertain, and inspire with her music and humanitarian efforts. From arts and entertainment to championing mental health awareness, we are elated to honor this legendary artist whose extraordinary life and career has made an unforgettable impact on our world.”

Collins’ new podcast, Since You’ve Asked debuted in July; and her latest album Live at the Town Hall, NYC dropped in August. Check ‘em out!

Get into it!
#NBT

[Editor’s Notes: * “Judy Collins Has a Time Machine” by Amanda Hess was published in The New York Times on November 26, 2019 // ** A Little Night Music took its title from the literal English translation of the German name given by Wolfgang Amadeus Mozart to his 1787 composition for a chamber ensemble, Eine Kleine Nachtmusik (aka Serenade No. 13 for strings in G major, K. 525) // *** The two performed at Reynolds Hall at The Smith Center for the Performing Arts on October 21, 2017, as a stop on their Stills & Collins 2017 Tour]