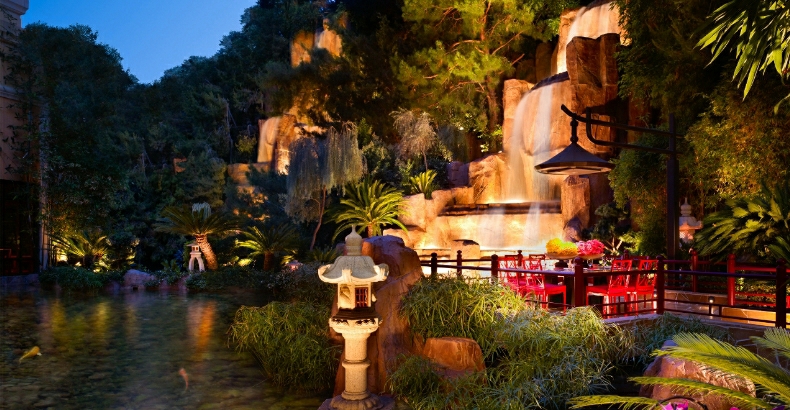 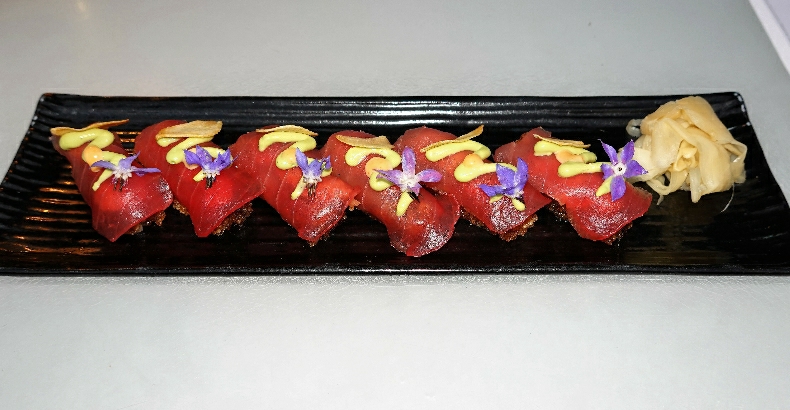 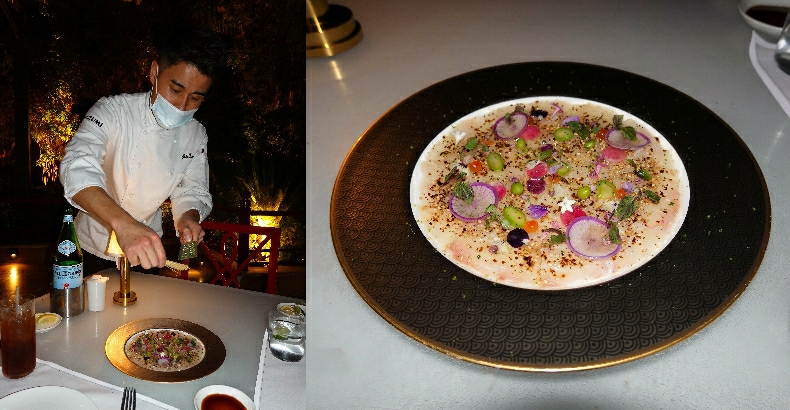 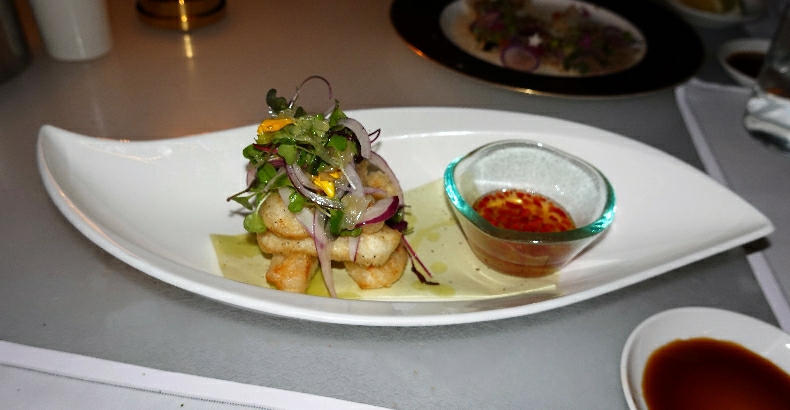 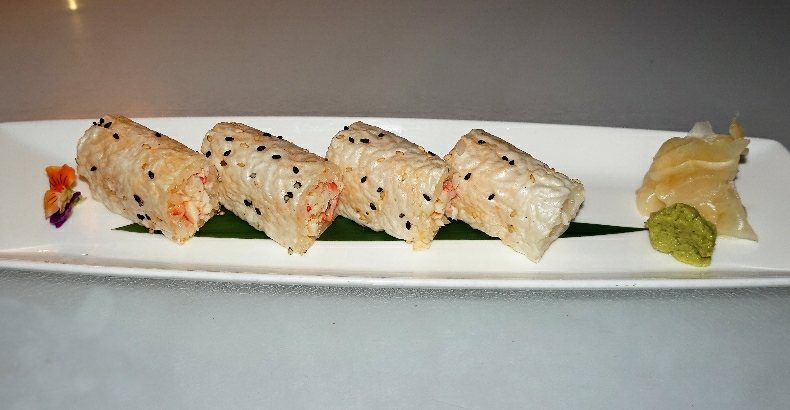 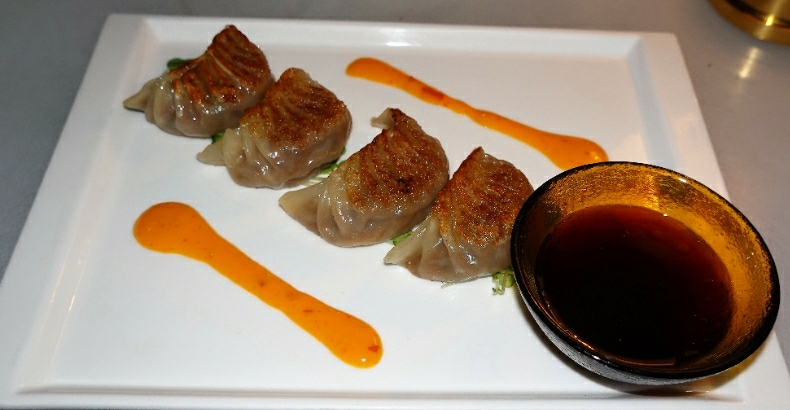 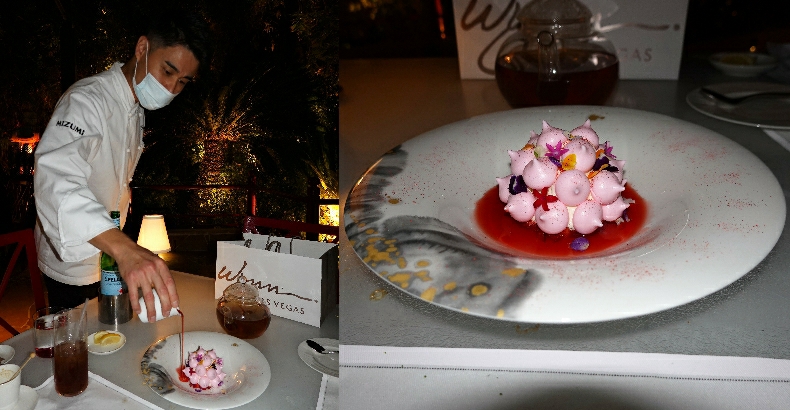 Despite the sheer volume of meals I enjoy at Wynn Las Vegas, I always seem to forget about Mizumi, the resort’s fabulously elegant Japanese restaurant.  Then, a short while ago, I was putting together an on-air segment about patio dining for News 3, and it came to me like a V-8 head-slap.  That the gourmet room—awarded four stars by the Forbes Travel Guide—was now operating under recently-imported executive chef Min Kim, only underscored further the urgency behind my recent visit.

Upon graduating from university Chef Kim (who’d been born in Korea and educated in Australia) returned to Seoul where he worked alongside his father, at the elder Kim’s esteemed traditional Japanese restaurant.  Two years later, he moved to Tokyo, where he refined his gastronomic savoir-faire, first at the lauded Michelin two-starred Les Créations de Narisawa, and then at the Michelin three-starred Nihonryori RyuGin; after which he donned the toque blanche at Wynn Palace Cotai, as executive chef of that Mizumi (itself the recipient of five of those Forbes Travel Guide stars), before coming to Las Vegas, earlier this year, to helm this Mizumi.

The charismatic Kim’s delicious dishes are now presented overlooking Mizumi’s private Japanese gardens, complete with a stately koi pond into which a 90-foot waterfall flows.  And while the patio at Mizumi affords picture-perfect views of this vista; it’s the restaurant’s Floating Pagoda Table—adjacent to the waterfall and accessible only by a private path through the verdant vegetation—that has got to be the ne plus ultra of socially distanced dining in Las Vegas.

Accompanied by my go-to plus-one, Dawn Hume—and ensconced at that Floating Pagoda Table—I had one of the greatest sushi dinner experiences I can recall, where everything just clicked.  And while each dish was a delight in and of itself, some were utterly sublime.

We’ve all had some variation of spicy tuna on crispy rice; but it wasn’t until I tried the Crispy Rice with Spicy Tuna Sushi, that I ever imagined the dish through the lens of haute cuisine.  Check out the photo in the slideshow to see the result of Chef Kim precisely layering translucent slices of tuna, spicy truffle mayo, sweet soy, and avocado purée, on beds of Yumepirika rice (that full-flavored, white-as-snow rice from Hokkaido, Japan’s northernmost main island), and topping each with the “starflower” of the edible Borage plant.  Why?  Because, as Chef Kim tells it, in addition to the “hint of natural acidity” the flower brings to the flavor palate, “I just love the bright purple color on them.”  What’s not to love?

I’ve heard it said that a certain dish was like “a party on a plate,” but until Chef Kim presented us with the Wild Snapper Sashimi Usuzukuri, I’d never actually considered what that might look like, let alone as represented by wafer-thin slices of Japanese madai snapper* topped with sliced baby red radishes, Egyptian Starflowers, Shiso flowers, bits of the edible kelp known as konbu, and a sprinkling of sesame seeds, over which a white soy and lime dressing has been drizzled; all of which readies the stage for the application of fresh yuzu zest, shaved tableside.  And—at once fun, floral, flavorful, and festive—it is very much a party for both plate and palate.

Gyoza and shishito peppers are invariably the first things I order when I’m out for sushi.  Likewise, they’re the first things I eat at such a dinner.  And, while I certainly commenced with the Shishito Green Peppers with Dried Tuna Flakes (which were zesty, and presented laterally, speared chicly on a long skewer); the Wagyu Gyoza Dumpling was far too substantial to ever be mistaken for a starter course.

Each gyoza is stuffed with a succulent blend of Kobe Beef, the coveted A5 Wagyu that is Hokkaido Snow Beef**, and some seasoned soy sauce.  And they are rich.  Not so rich that you’ll wonder where you’d put your cardiologist’s number after that last angioplasty, but they are decidedly decadent.   Lemme put it this way…  Upon eating two [okay, three], I fell back in my chair, and teetered on the brink of succumbing to la petite mort; right there, at the floating pagoda table, at the foot of that 90-foot waterfall.  I don’t know about you, but much as I love them, dumplings don’t usually affect me so profoundly.

After catching my breath, we were asked if we cared for dessert, to which my only stipulation was that it be something “whimsical;” and they nailed it, with the magical Strawberry & Vanilla “Hanami”—literally translating to “flower viewing,” hanami is the traditional Japanese custom of enjoying the ephemeral splendor of flowers (hana), originally in reference to the blossoms of the plum tree (ume) and more recently those of the cherry tree (sakura)—a figural sakura crafted from strawberry meringue, topped with freeze-dried strawberry dust, freshly whipped cream, and more of those Shiso flowers, with a tableside pouring of “strawberry essence” completing the presentation.

If in retrospect, I have one regret, it’s that prior to my recent dinner at Mizumi, it never occurred to me to expect flora on my fish (edible or otherwise).  Now that I have, how am I not going to feel let down, the next time I go out for sushi and my plates are presented with nary a bloom in sight?  I guess I’ll just have to cross that bridge when I come to it.  And when I do, you just know there aren't gonna be any koi swimming under it.

Get into it!
#Mizumi

[Editor’s Notes: * Known as red seabream on these shores, madai (“genuine snapper”) has been considered the ‘king of fish’ for thousands of years, and is a traditional auspicious food—due to the pun that arises between the similarity of the words tai (snapper) and o-medetai (celebratory or joyous)—with the fish often photographed being held overhead by victorious sumo wrestlers and politicians, alike // ** Known as Hokkaido Snow Beef—for being ‘as delicate as a snowflake’—the Kuroge Washu cattle (aka Japanese Black Wagyu) are raised on the snow-covered peaks of Japan’s northernmost island of Hokkaido, on a diet consisting mostly of the sweet corn for which the island is known.  As a result of the thick coats they grow, their fat melts at a lower temperature, thereby accounting for the sweet flavor.]