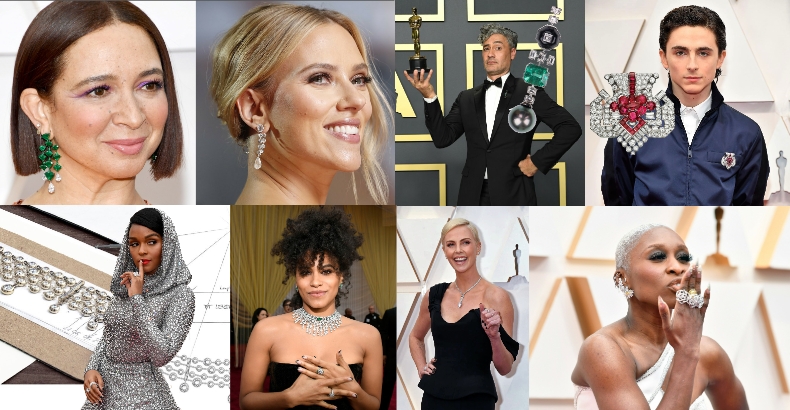 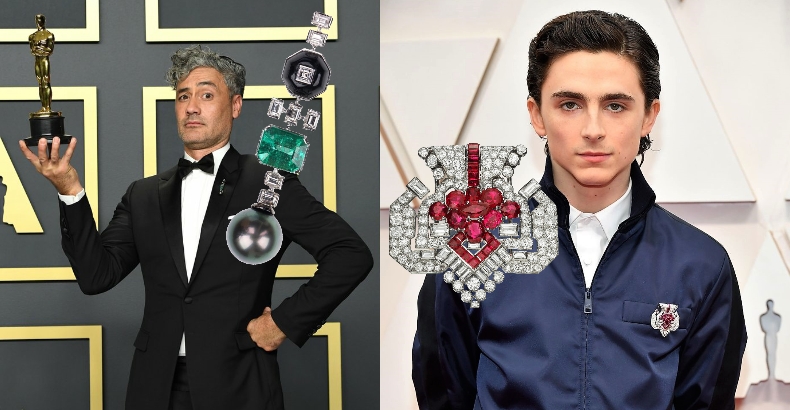 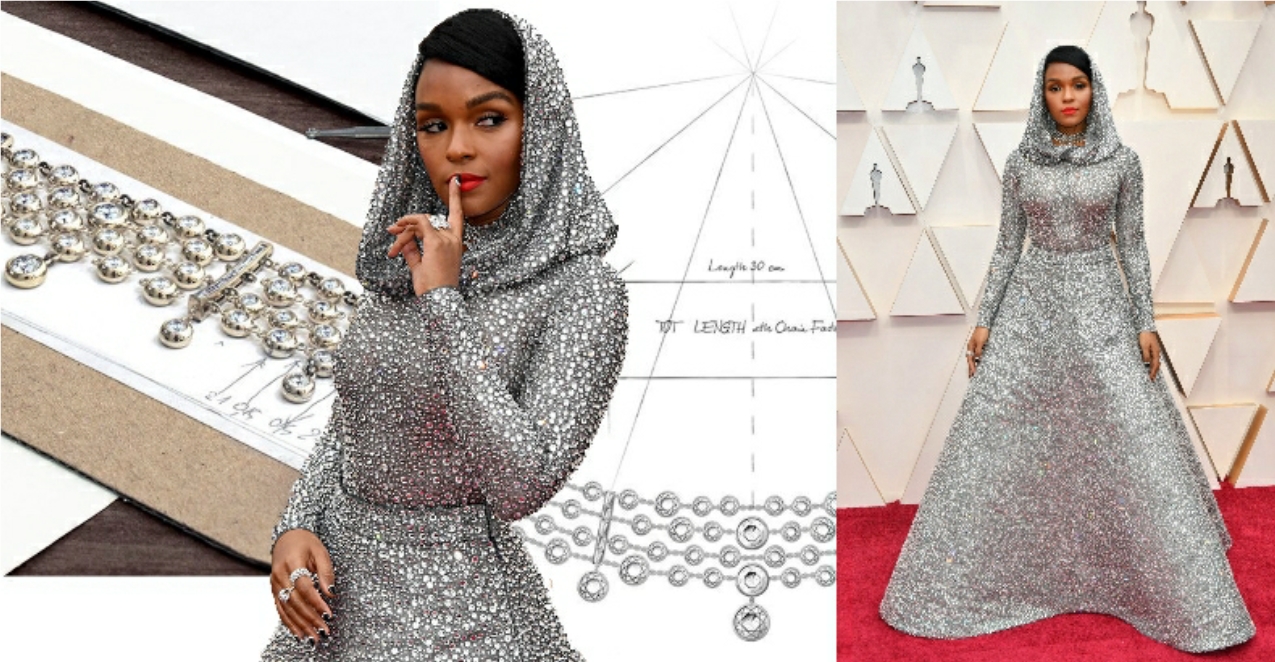 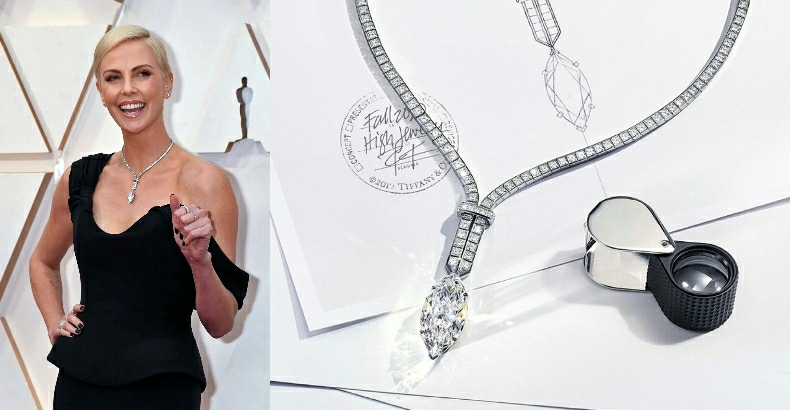 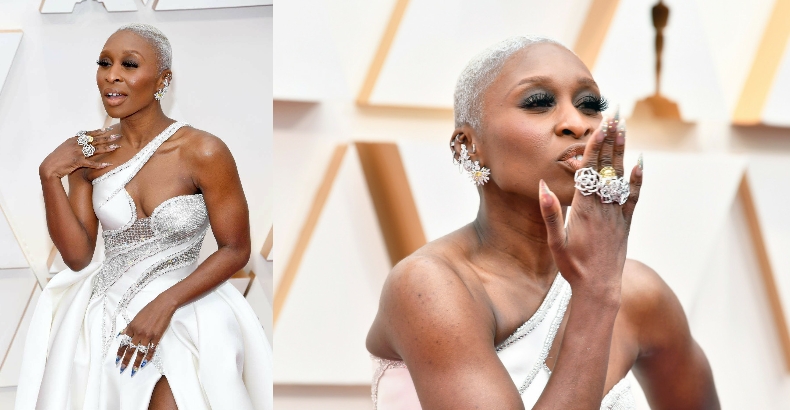 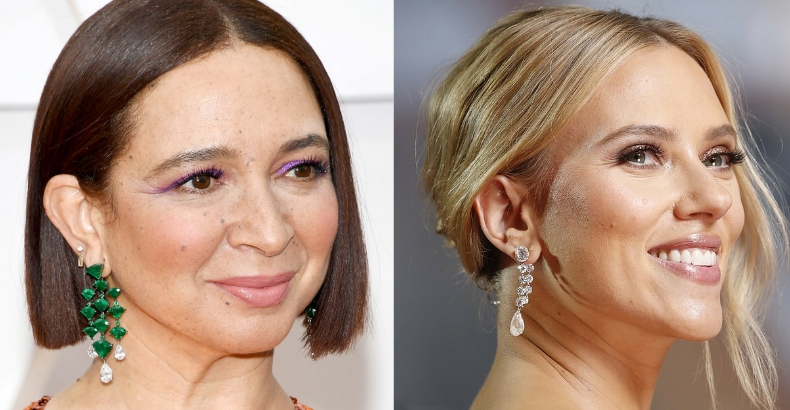 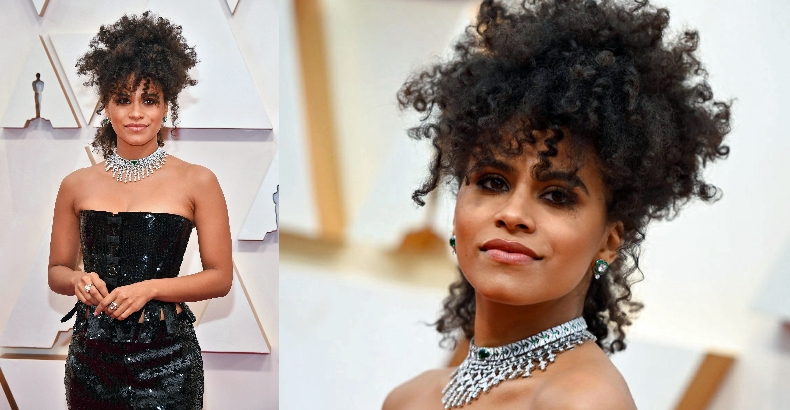 As they worked their way down the red carpet at the Dolby Theatre, on their way into the 92nd Academy Awards, Hollywood’s biggest names featured some eye-popping jewels.  Here are my faves.

Timothée Chalamet / Cartier:  If the role of fashion is to ignite commentary, then Timothée Chalamet was easily the most fashionable fellow at the 92nd Academy Awards.  Wearing a zip-up Prada jacket and matching pants in navy satin with black accents—giving him the appearance of the world’s chicest and well-styled First Responder—the actor (who styles himself) ignited a Twitter frenzy.  Me?  I thought it was clever and applauded his self-styling moxie. What I absolutely adored, though, was the exquisite brooch from Cartier’s Heritage Collection (c.1955) of diamonds and Burmese rubies, set in platinum and 18k white gold, he wore affixed to the edge of his jacket pocket, that brought an air of savvy sophistication to the aggrandized athleisure look.

Janelle Monáe / Forevermark:  Whether you think she was channeling ‘80s-era Grace Jones, or an intergalactic priestess, there’s no denying that Janelle Monáe was the sparkling star of the 92nd Academy Awards, in her fully-embellished bespoke Ralph Lauren Collection silhouette—a lacquered silk lamé tulle gown with an open back and a draped hood, that required 600 hours to hand-embroider its 168,000 dégradé crystals—not just on the red carpet, but also at the ceremony, inside.  Completing her stellar look, the singer/songwriter/actress wore 60.44cts of Forevermark diamonds set in 18k white gold, with 36.54cts of those at her throat in the form of the Forevermark Lace of Light diamond choker.  Carry on, Ms. Monáe: You slayed!

Charlize Theron / Tiffany & Co.:  Few have so consistently dazzled on the red carpet as has Charlize Theron, these past couple decades; and Sunday night at the Oscars was no exception.  Nominated for Best Actress, for her portrayal of Megyn Kelly in Bombshell, the dramatic neckline of her sculptural black silk Dior Haute Couture gown beautifully framed the exceptional Tiffany & Co. necklace around Theron's neck.  Designed by Tiffany’s chief artistic director, Reed Krakoff, and taking roughly a year-and-a-half months to create; the $5 million jewel—from the house’s Fall 2020 High Jewelry Collection—features 165 diamonds set in platinum, highlighted by a magnificent marquise-cut diamond of 21cts, that’d been responsibly sourced in Lesotho.

Taika Waititi / Nikos Koulis:  Just when I thought it wasn’t possible to be further enchanted by the charming Taika Waititi—whose film, Jojo Rabbit, won him the Academy Award for Best Adapted Screenplay (as well as a nomination for Best Picture) at the Oscars, Sunday night—he arrived on the red carpet, nattily attired in a tailored tuxedo from Dior Men, with a 45mm Panerai Luminor Due on his wrist; which surely would’ve landed him on any Best Dressed list (in just about any year).  But then I saw it, and literally clapped (from the comfort of my bed), because there, on his lapel, was a pin from Nikos Koulis’ Lingerie collection.  And this totem—which added a silver Tahitian pearl to a combination of emerald, diamond, and black enamel that so wonderfully epitomized Koulis’ contemporary interpretation of Art Deco—elevated Waititi’s look from one of effortless elegance to one of sartorial splendor (as Koulis’ pieces so often do).

Cynthia Erivo / Piaget:  It’s hard to imagine that anyone on the Oscars red carpet was having more fun with her jewels (and overall glam), than Cynthia Erivo.  The talented English actress and singer (who’s only an O away from her EGOT) was nominated for Best Actress for her portrayal of Abolitionist Harriet Tubman, in Harriet, and performed a soaring rendition of her song from that film, “Stand Up” (itself nominated for Best Original Song).  Self-identifying as a “little brown girl in white,” Erivo accentuated her dramatic Atelier Versace gown with some glam nail art by Gina Oh—one hand inspired by Van Gogh’s Starry Night, and the other by the North Star that Tubman used as a guide—and enough Piaget jewelry (from the Maison’s Rose, Possession, and High Jewellery collections) to cover seven of her fingers and both ears (from lobe to helix) with sparkly diamond goodness.  Between the look, the voice, that sensational hair, and the joyful jewels, Erivo was giving me all the feels!

Maya Rudolph / Lorraine Schwartz:  While she and Kristen Wiig were singing their mash-up of ‘colorful’ songs, onstage at the Oscars, I couldn’t look away from the spectacular Lorraine Schwartz chandelier earrings of Colombian emeralds and diamonds, suspended from Maya Rudolph’s shapely lobes.  Rudolph—draped in a flowing Maison Valentino caftan-style gown of metallic burnt-orange sequins—kept her hair behind her ears to better display the dazzling danglers, that had been worn in December, by Beyoncé (whom Rudolph used to satirically portray, on Saturday Night Live) to Diddy’s 50th birthday.  As Rudolph quipped to Women’s Wear Daily, “I just found out Beyoncé wore them once, and I like that: We like to share things.”

Scarlett Johansson / Forevermark x Anita Ko:  There’s no doubt that Scarlett Johansson knows how to rock some rocks, and the silver screen siren wore nearly $2.5 million of Forevermark diamonds with her custom Oscar de la Renta gown, to Sunday’s Oscars ceremony.  And while the Forevermark diamond bracelet she wore featured a whopping 29.15cts, it was the magnificent earrings designed for Forevermark by LA’s Anita Ko that really made my pulse race.  Approached by to design a few “special pieces” for the Oscars, using stones from Forevermark’s Exceptional collection (i.e. rare stones, of the highest quality, weighing 3cts or more), Ko—upon first seeing the two #PearShapedDiamonds—knew immediately that the design of her Olivia Diamond Rope Earrings would make an ideal setting for these one-of-a-kind showstoppers, featuring 26.65cts of diamonds set in 18k white gold.  Said Ko, “I was honored to take my signature design aesthetic and transform these rare, natural treasures into red-carpet-worthy masterpieces.”  Scarlett Jo in Anita Ko?  Yes, please!

Zazie Beetz / Bulgari High Jewelry:  And winning in the category of “More Is More,” was Joker’s Zazie Beetz, who—in addition to a scintillating black sequined corset with a slashed-hem, a tapered vent skirt, and black sling-backs from Thom Browne’s SS20 collection, that was at once luxe and fresh (and according to Beetz required her being sewn into it); and a saucy Eartha Kitt-inspired ‘do, fashioned by Lacy Redway—was a walking Bulgari High Jewelry story.  Stylist Solange Franklin precisely paired the storied jewelry house’s choker of diamonds and emeralds, with its Divas’ Dream necklace (both in 18k white gold), to comprise a $1.3 million high jewelry stack around Beetz’s neck, that read as one eye-popping jewel; clipped a pair of High Jewelry earrings with more emeralds and diamonds to her ears; and wriggled a couple of High Jewelry rings in platinum with still more diamonds and emeralds onto her fingers.  All told, Beetz was fiercely festooned in roughly 120 carats of Bulgari High Jewelry finery, and frankly, I’m a better man for having seen it (if only on television and the Interwebs)!