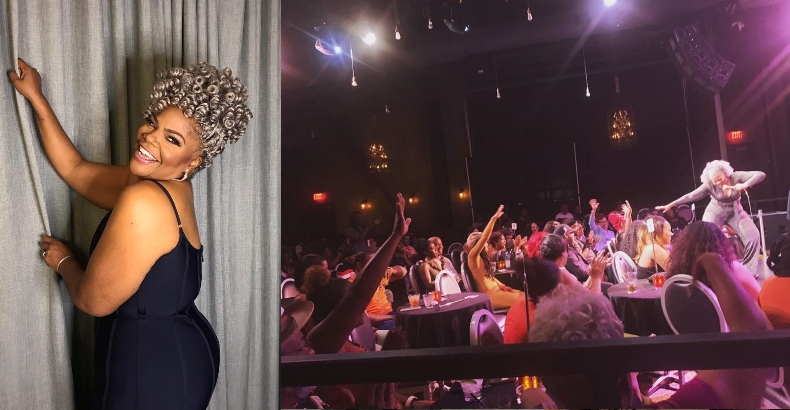 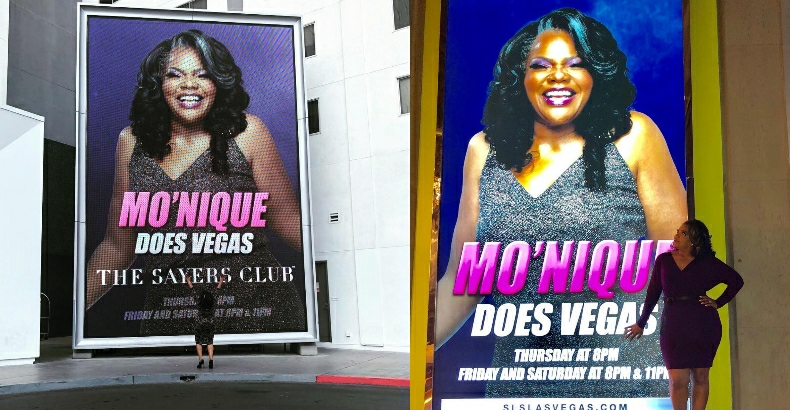 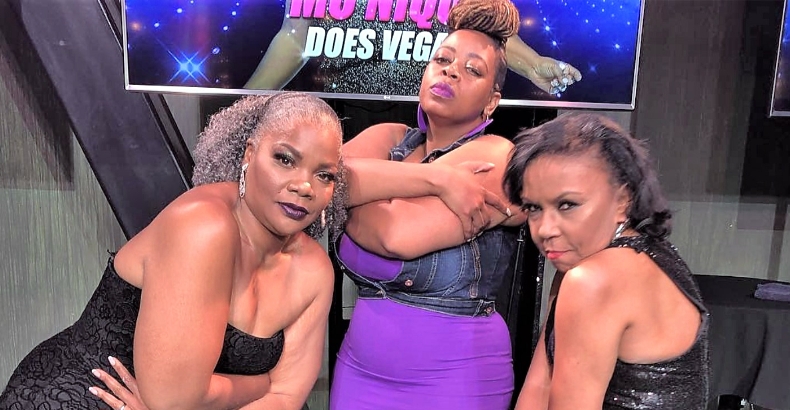 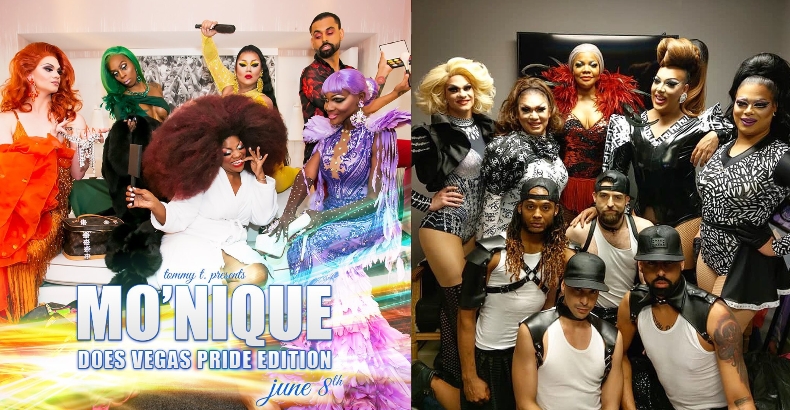 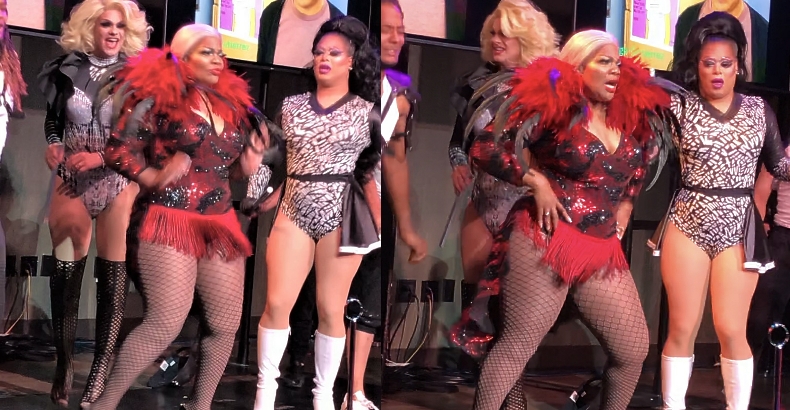 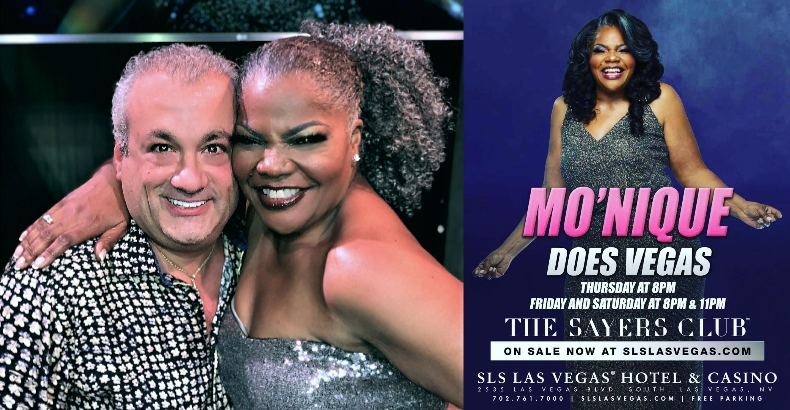 Mo’Nique is a fiercely funny woman.  That she won an Oscar – for Best Supporting Actress, in 2009, at the 82nd Academy Awards – for portraying one of the least funny characters of the last decade (‘Mary Lee Johnston’ in Precious: Based on the novel ‘Push’ by Sapphire); well, that just underscores how fierce she is with everything she undertakes.  So, when a friend invited me to see the PRIDE Edition of Mo’Nique Does Vegas – her Strip residency show that takes over The Sayers Club at SLS Las Vegas every Thursday, Friday, and Saturday night – I just asked what time I needed to be there.

Now, I know enough about Mo’Nique and her brand of humor (she was and shall always be a Queen of Comedy) to know that as an outspoken champion of the LGBTQ+ community, she was gonna bring it for PRIDE.  And lemme tell you, she made sure it got brought!

The evening began with Chicago’s Correy Bell, who had this brilliant bit about getting dressed-up all sexy (thigh-high stiletto boots, the “good wig with the strap in the back,” and her hot trench coat) to pick-up her husband at work, and then stepping in a crack and falling down a flight of stairs in front of her husband and his co-workers, and having her wig fly-off, and then deciding that her best (only?) move was playing dead.  When I tell you that the room fell out, laughing and screaming and snapping, well, you get the idea.

Then, Bell left the stage, and it went black.  And then a bunch of video monitors sparked to life, and Mo’Nique’s immediately recognizable visage began speaking, and preaching, and basically taking the audience to church with her calls for equality.  And then BOOM!  The stage was packed with drag queens, and in their midst, pulled, plucked, and primped, stood the mono-monikered headliner, herself; and she proceeded to do a series of high energy lip syncs, that ended in a flurry of flags, and high-kicking, and even a rather fabulous death-drop by a drag queen named Elliott.

Then Bell returned (in a great drag-y look that corresponded with those worn by the queens), to introduce the night’s second comedian, the legendary Sylvia Traymore Morrison.  History Lesson: When Richard Pryor had to bow-out of emceeing 1979’s highly promoted roast of Muhammad Ali at the Apollo Theater, Dick Gregory reached-out to America’s first black female impressionist, Morrison, who – signed by Redd Foxx to her first management contract, and recently back from entertaining the troops, overseas – assumed the mantle and emerged as the belle of the ball.  After the roast, Saturday Night Live’s Garrett Morris (better known to Millennials as ‘Earl the Cashier’ from 2 Broke Girls) insisted that she come and meet his boss, Lorne Michaels.  The meeting resulted in Morrison becoming SNL’s first black female writer (though, whether because she was a woman, or black, or both, she was only hired as an Associate Writer).  Anyhoo, the lady can do impressions; and good ones, too.  She sang as Dionne Warwick.  She sang as Patti LaBelle.  She did a multi-role bit as Wendy Williams, Michelle Obama, and Melania Trump.  And she landed every single one.  Truly a pleasure to watch.

Of course, it’s Mo’Nique’s show; and if you know one thing about Mo’Nique, know this – she’s no half-stepper.  If she’s making you laugh, she’s not happy until you’ve fallen off your chair, and are on all fours, on the floor of the theater, gasping for air, with tears rolling down your cheeks.  Don’t confuse her with those stealthy comedy ninjas, the ones who take you meandering down some primrose path, observe a few things, and then deliver a slickly timed punchline.  No, ma’am.  Not Mo’Nique.  She comes out and breaks things down for her audience, right up front.  She lays out a roadmap that makes it pretty clear where she’s planning to take you; but oh, does she have fun bringing you on that journey, with her.  She is loud, she is raunchy, and she is unapologetic, to be sure; but the way she’s able to be all of those things and keep her audiences begging for more is by delivering it all with a whole lotta heart.  And it’s that authenticity that is Mo’Nique’s greatest gift as a comedian, an entertainer, and as a human being.  She keeps it real.  Fortunately for all of us, since real is usually twisted, gorgeous, wrong, fabulous, and brilliant; Mo’Nique’s delivery ensures that it’s all funny AF.

Get into it!
#MoNique