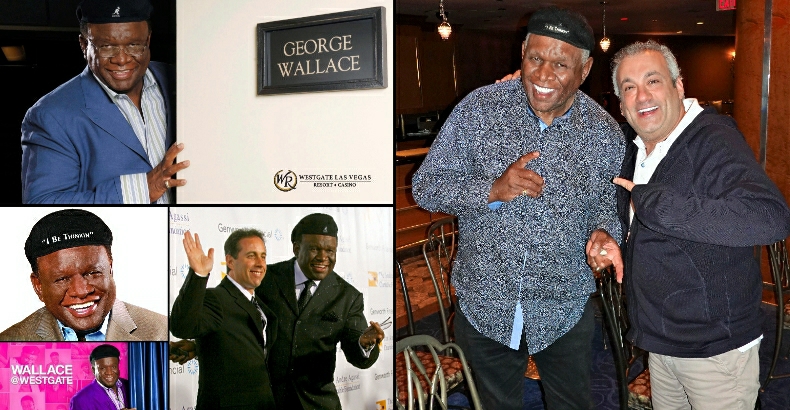 ShulmanSays:  How do you unwind?

George Wallace:  Oh, man. I love to bullshit. Sit around. We're really getting into it now! I love to just sit around and have fun and enjoy people.

SS:  What's better than that?

GW:  Mmhmm. And I love to travel. I love to get me a good first class seat. I don't talk enough on the planes though. You know?

SS:  Are you kidding? I sat next to you on a plane, once. We were coming from L.A. to here, I think.

SS:  Yes, you did. Well, actually I talked to you, and you answered.

SS:  You were wearing a black leather jacket with an eight-ball on the back, maybe?

GW:  You're an old dude, if you remember that eight-ball jacket! Those were so popular back in the day. That was a jacket by a designer named Jeff Hamilton.  I was the first one to start wearing his leather jackets on TV, and everybody went crazy; which made them very popular.  And he used to give them to me.  Every TV show, I’d wear a different sharp leather jacket, by Jeff Hamilton.  That's probably why you remember it.

SS:  That, and the fact that you made me laugh so hard, I almost peed in my pants.

GW:  You can go straight to Hell!

SS:  I’ll change my plans…  Is it true that sometimes you just go to the airport and find a flight and get on a plane?

GW:  I did that. Yeah. I do that all the time. I started like 40 years ago, with that big department store in London, Harrod's. They used to have a world-famous sale, and every year, they'd announce it on TV, "World-famous Harrod's sale." And I go, "What the fuck everybody talking about?"  It was a Thursday morning – and I never will forget thinking “I'm going to go check this out!”

By 4:00 o'clock, I was on the flight to London.  Then couldn't find shit. I don't like London, first of all. I don't like the old buildings. I don't like the old ways. And I've been there almost 20 times. I played the O2 Centre, and everything. But I went to that Harrod's sale, and from that day on, I’ve traveled. Since I was a kid, I just loved traveling, and meeting difficult people.

SS:  I recall you saying something about Shanghai being three times bigger than New York and three times more modern.

GW:  That’s because Shanghai is three times bigger and more modern than New York.  I’ve been there, too.  And then there’s that Megyn Kelly; the one who said Santa Claus was white?*  Well that pissed me off, because Santa Claus is whatever you need him to be.  Do you think he’s white, in Jamaica?  I don’t think so.

SS:  Nope.  Not in Jamaica, Queens, either.  It’s like that Christmas episode of Welcome Back, Kotter, where the door swings open, and Freddy “Boom Boom” Washington strolls-in, wearing a Calypso shirt and a straw hat, singing “I don’t care what de white man say: Santa Claus was a black man” (or something like that)?

GW:  Yeah! See? There you go. Fact of the matter is, if you really want to think about it, Santa Claus is Chinese, you know?

SS:  Of course, he is!  How else could he make all those toys?

GW:  You got it.  Read the bottom of those toys!

[Editor’s Notes: *Two weeks to-the-day after this interview, NBC announced the cancellation of Megyn Kelly Today, due to comments Megyn Kelly’d made three days earlier, defending the use of blackface on Halloween.]