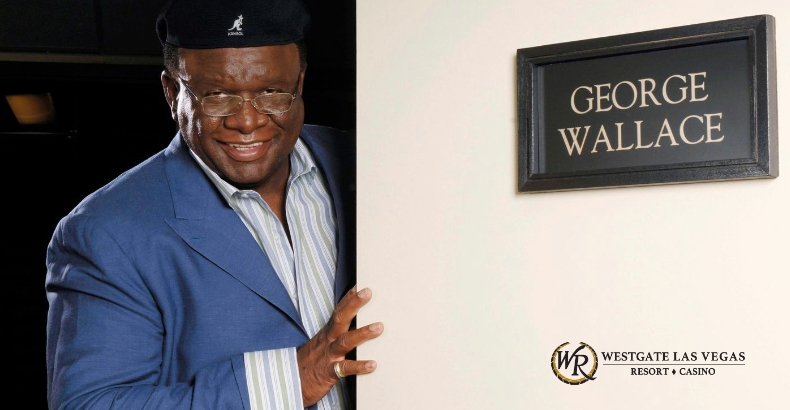 ShulmanSays:  Who inspires or impresses you, these days?

George Wallace:  I had a lady in here, last night by the name of Anjela Johnson.* She's only been doing comedy for 11 years, but she's packing-out showrooms. This week, she's at the Treasure Island. Eddie Griffin impresses me. Smooth, what his name?

GW:  JB Smooth, with his crazy eyes!  Yeah, that’s him.  Of course, I'm still working with Jay Leno and-- Oh, my goodness!  Just the young kids you don't even know impress me.   And knowing that, means knowing there's an audience for you, because each comedian has a different path, each career has a different path. And if you do what you do, there's an audience for everybody.

Some people don't like George Wallace. That's okay. But enough people do to satisfy my little ego and pay me some. And then you don't have to be the number one comedian making all the money in the world.  Sometimes, it's not so good to be on top. Everybody on the top has problems.  Bill Cosby's in jail.  Everybody on top – Harvey Weinstein, those guys –  something happens to them. Richard Pryor, Tiger Woods. I'm just doing the black people now, okay?  I'm just all of the black people who made it to the top. It doesn't matter who you are; when you’re on top, somebody's going to bring you down.  O.J.  It doesn't matter who it is.

SS:  I’m so glad you mentioned O.J., because I was watching routines of yours – one from 1994 and one from 2009 – and in both routines you said something like “Now, I’m not gonna make any O.J. jokes.  (Oh, I got ‘em: I got ‘em.)”  And I was blown away that after fifteen years, that same joke was just as funny, the second time around.  Maybe more so.

SS:  You had a line like “What happens in Vegas, stays in Vegas.  Just ask O.J.”

GW:  Yes! (laughter) You know, a while back, I was doing something about how President Bush had become so fucked up that we had people sneaking back into Mexico.  Now, we’ve got Trump, saying things we ain’t never thought we’d see someone say.  We look at Bush now, and we go “Oh hey!  He wasn’t so bad.”  So, it’s the same joke, but with a twist,  Meanwhile, all the people in Mexico are now thinking “Maybe we should build that wall, and keep them out!”

SS:  What's the best thing about achieving the level of success that you have?

GW:  Enjoying life and living my dream. And that's why I'm the most successful comedian you've ever met.  It's not how much money you make; it's how you enjoy your life while you're living.

GW:  It's just–  I go to work every night and I wished everybody could just-- I'm ready to go to work right now. I'm talking to you, but I could go on stage at any moment, at any time, and go to work. And it's in my head. And my job is to say funny things. And when I see that people are happy, it makes me happier. So I could be–  Look, it's my sex: It's my drugs.  I just love going to work.  And almost everybody–  Everybody should have that dream.  And I teach the college kids, "Make sure you enjoy your life. Do something you enjoy.  When you enjoy, you don't worry about the money. The money will come.  You don't need all the money in the world.  You can't use it anyway."

SS:  Is it true the men of your family have won a whole mess of Super Bowl rings?

GW:  Oh, my mama played football too. (laughter) Well, you said the men in my family. (laughter) My brother, Steve Wallace, played number 74 for the San Francisco 49ers; with Joe Montana and Steve Young. Three Super Bowl rings. My nephew is the world-famous Amani Toomer; and he played for the New York Giants.  Amani is from Oakland, California. Went to De La Salle High School, one of the best football programs anywhere.  And one of the nephews, Bobby Hamilton, he played for the New England Patriots. So, that's three rings for Steve Wallace, two rings for Amani, and two rings for Bobby.**  Seven rings.  And we had them all on display at the family reunion, about eight years ago.

SS:  Down in Atlanta?

[Editor’s Notes: * A onetime Oakland Raiderette who performed at Super Bowl XXXVII, Johnson was a featured performer on MadTV, where she created her breakout character, Bon Qui Qui.  Johnson has had three stand-up comedy specials, one on Comedy Central (2009) and two on Netflix (2013 and 2015) // ** Of the two rings worn by Amani Toomer, one is his championship ring from Super Bowl XLII, and one is the Giants Ring of Honor.  Established with the Giants Hall of Fame in 2010, to honor Giants who helped the franchise achieve each of their championships; Amani is a member of the inaugural class of inductees, alongside Phil Simms, Bill Parcells, Michael Strahan, Tiki Barber, Frank Gifford, and Lawrence Taylor, as well as Tim, Jack, and Wellington Mara.]