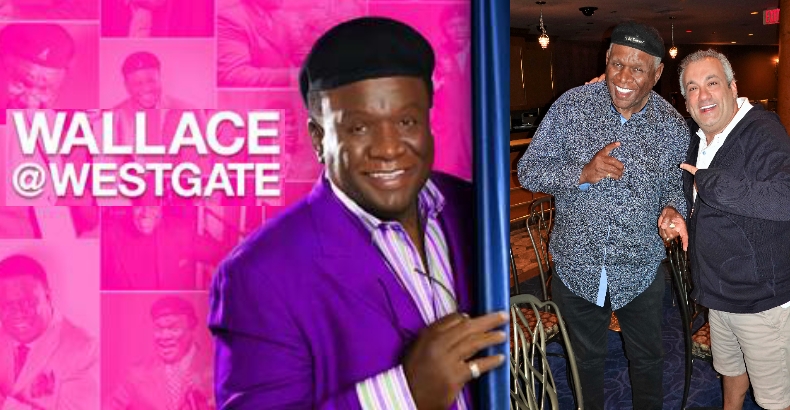 George Wallace has been making audiences laugh for decades, much of that as a Las Vegas headliner.  With his new residency, WALLACE @ WESTGATE, the man who’s “been thinking,” sure has an awful lot to say.  Recently, ShulmanSays sat-down with Wallace, inside the Westgate Cabaret at Westgate Las Vegas, where audiences are treated to his insightful and sometimes frustrated observations, for up to five nights each week (when he’s not touring).  Here’s what transpired.

ShulmanSays:  When you were a young touring comedian, what are some of the funnier things that you experienced on the road?

George Wallace:  Okay. As a funny, young, touring guy, I was different than most entertainers or comedians that you see because I started my first night at work, I did The Tonight Show; and the next night I was opening for Natalie Cole, in front of 17,000!

SS:  No shame in that game!

GW:  Now, when you did The Tonight Show - overnight, Bam!  You just went to work. So, that’s what I did with Natalie Cole. I toured with George Benson.  I was with Diana Ross for a year and a half.  I did something with Smokey Robinson.  I’ve worked with everyone.

GW:  Yeah, I worked with Helen Reddy.  I was with Tom Jones for five and a half years. And that's all I ever wanted to do.

So that's all I ever wanted to do and I'm living my dream. I came here and I'm with Diana Ross at Caesars Palace.  I took Tom Jones, too. Now, they come visit me.  We visit each other.

SS:  I actually just saw Diana Ross open the Hollywood Bowl, and she was phenomenal.

SS:  And now, she did all of these very lush and symphonic arrangements of songs that she isn’t able to do at her Vegas residency; because you've got people flying in from all over the world, and if she doesn't do the Supremes classics, and the Motown hits, and the Disco standards, those queens would revolt.

GW:  She gotta stay right there.

SS:  So she was with Hollywood Bowl Orchestra and a 20-piece gospel choir, and it was all very orchestral. And then she did a 10 or 15-minute version of “Amazing Grace”.

GW:  (chuckles) I also got fired by Diana Ross at Caesars Palace.

GW:  Yeah. It was back in the day, and at least fifty percent of the audience was gay. “I'm Coming Out” and “Upside Down” were hits, and when gay people love you, they love you; so they gave me a standing ovation. Meanwhile, she's ready to come out, and that's an extra minute, minute-and-a-half of time that I had to kill just saying "Thank you, thank you," It's just—Well, I got fired. But she hired me back two weeks later. So that's that.

Anyhow, about eight years ago she came back to Caesars Palace.  And I said, "I'm here in town, across the street, working. Matter of fact, I'm going to come over and open for you.” She asks, "Are you crazy?" I say, "Well, you're the first one that brought me here." She says, "You are crazy!  Let’s do it again." And it was the audience was just like the one we’d had there, back in the 1980s.

Continued in Part 2 - but until then, heed Wallace’s thoughts on travel, “When you’re in Las Vegas, you can go see Blue Man, or you can come see the black man.”