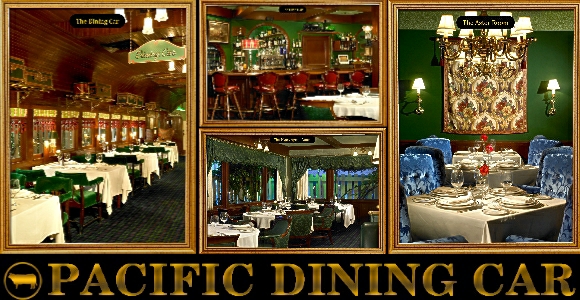 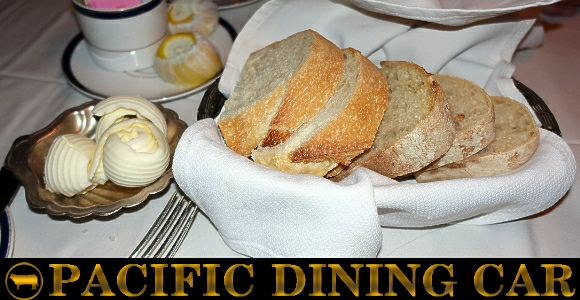 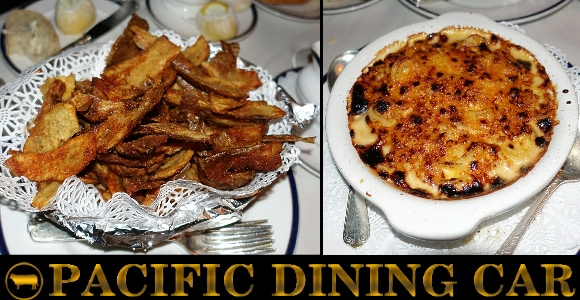 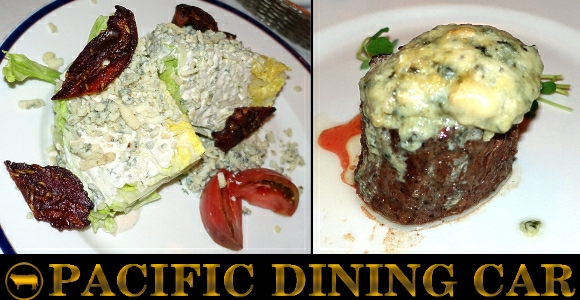 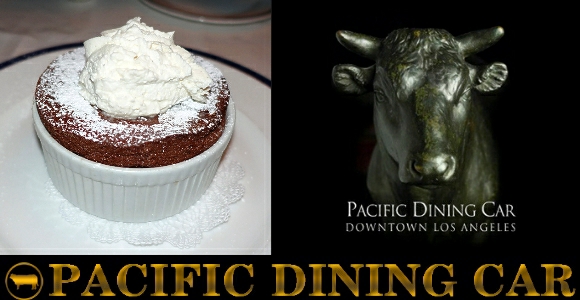 Recently, in Los Angeles for the weekend, I had plans to meet my friend Bryan Rabin for dinner.  As Bryan is a wealth of obscure factoids about his adopted hometown, when he asked what sort of place I was in the mood for, I replied: “Something old-school, with great décor and really good food.” Without missing a beat, he replied “Oh. You want the Pacific Dining Car.”

Now in its 101st year of operation, the still family-owned Pacific Dining Car opened in Downtown Los Angeles neighborhood of Westlake, in 1921, by Fred Cook and his wife Grace (aka “Lovey”).  Before moving to California; the Cooks had enjoyed a terrific experience at a New York restaurant, where the owner had converted an authentic railway dining car into a restaurant.  Lovey and Fred felt that – with some improvements – the concept would do well in LA; so (finding actual dining cars too cramped) they built one to their own specifications.

Today, as the only fourth-generation owned-and-operated restaurant in LA, Pacific Dining Car simply oozes charm with the style of a bygone era.  They’ve become experts at aging their beef (as they’ve been doing, on-site, since the late ‘20s); and serve classic steakhouse fare, as well as an extensive breakfast menu that – like the steaks – is available around the clock.

Upon being greeted by the maître d’, we were led through the Dining Car, past the Astor Room and the Huntington Room, and into the Club Car, where we were seated in a high-backed booth.  Along the way we saw a number of twosomes, enjoying the intimate privacy afforded by the booths.  Apparently, romance is alive and well, in DTLA!  But we were here to eat, not to gawk – though just about every big-hitter and power-player in town, has enjoyed the Pacific Dining Car at some point.  Whether America’s first movie columnist, Louella Parsons, or LA Times sports columnist, Sid Ziff, or actor George Raft; they all supped regularly at the Pacific Dining Car, alongside the glitterati and the gamblers.  Mickey Cohen was a regular (with bodyguard, in tow); as was Mae West – though the latter attracted more attention.  But even with a star of West’s caliber, one of the PDC’s great traditions dictated that even the most stellar of celebrities deserved to enjoy a relaxing meal without interruption.  This continues today, with regulars who include power-players, politicos, nearly a century of mayors, and contemporary celebs such as the band Linkin Park, and actors Nicolas Cage and Johnny Depp.

In 1974, in Roman Polansky’s Chinatown, PDC stood in for the old Pig ‘n Whistle, in the photographs Jack Nicholson examines of Darrell Zwerling arguing with John Huston. Fans of the movie Training Day will remember Denzel Washington introducing Ethan Hawke’s character to the “Three Wise Men” and then shooing him away while recommending the Baseball Steak, all in the PDC’s Pacific Northwest Room.  And the exterior, with its white picket fence and iconic statue of two cows, has been seen in the more recent films Street Kings (2008) starring Keanu Reeves, and Rampart (2011) with Woody Harrelson; both of which had screenplays by legendary crime fiction author, James Ellroy (LA Confidential, The Black Dahlia) who uses the restaurant not just as a frequent setting in his books, but also as the backdrop to his life; conducting interviews there, as well as one of his weddings.

Now you’re probably thinking “But, what about the food?”  It was marvelous.  And we ate so much that we were still full, the following day.  Our three hour meal was sublime (we coulda been in and out in an hour, but we were gabbing and enjoying ourselves, so why rush?).

We started with the bread.  Normally I would skip over something as seemingly mundane as bread and butter; but this was a dank sourdough with a salty butter that was so good, we were on our fourth basket by the time we realized we needed to save room for our suppers.  Next came the Iceberg Wedges with Roquefort and Candied Bacon (imported aged Roquefort cheese, atop a wedge of Iceberg lettuce, with candied bacon, in a vinaigrette dressing).  I don’t know how I’ve made it through forty-something years of living without candied bacon; but I intend to rectify that situation, post-haste.

One of the true headlines of the meal came when our waiter (who I’d wager has been at PDC for at least twenty years) brought the Cajun Fried Potato Skins.  Zesty, crispy, and packed full of flavor, they were delicious on their own; but incredible when dipped in some ranch dressing (which we ordered on the side).  And the only thing that surpassed that, was when – in a moment of culinary inspiration – I dipped one in the sauce of the recently arrived Macaroni and Cheese with Truffles.

The Roquefort Steak (broiled filet mignon glazed with Roquefort cheese) was tender and juicy, and thanks to the Roquefort cheese, a bit richer than the average filet.  Every bite was worth the increase in my triglycerides.  Already on the verge of an angioplasty, we decided to conclude with the Chocolate Soufflé.  The chef was obviously on his game because it came out light and velvety and – with the addition of the heavy whipped cream – by the end had morphed into an ooey, gooey, chocolatey pool of deliciousness.  After the soufflé, we lingered over espresso for another half hour; if for no other reason than we were too full to move.

Now, a week later, having finally digested the meal in its entirety; I can confidently say that it was worth every penny (of which there were many spent, as the PDC is many things, but cheap ain’t one of them).  So, if you’re in DTLA – whether you’re looking for the right setting for a power lunch or craving a steak and chocolate chip pancakes at 3am – the Pacific Dining Car is the place for you.