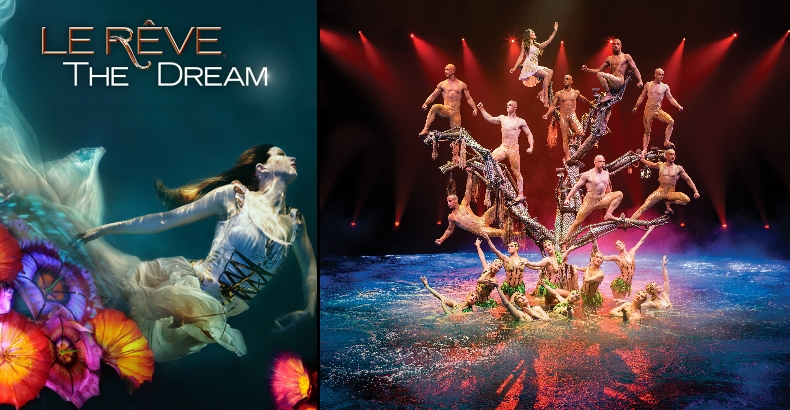 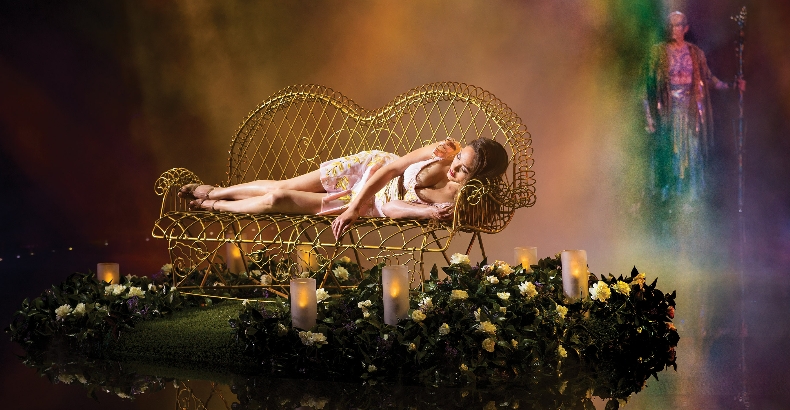 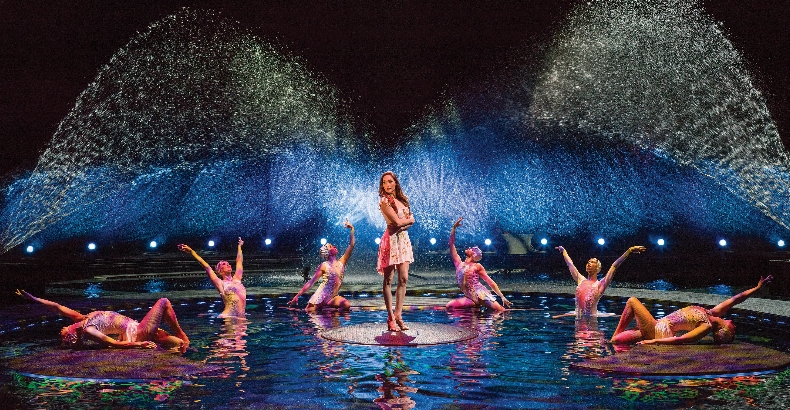 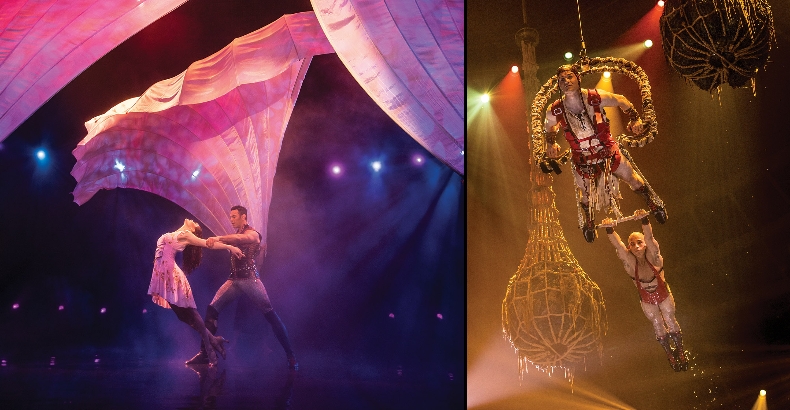 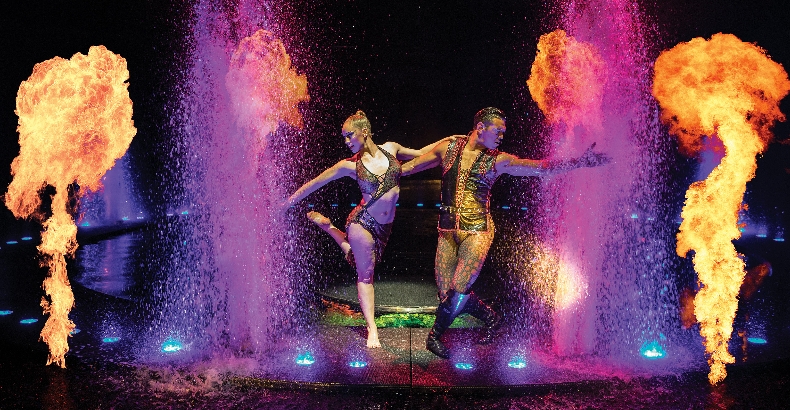 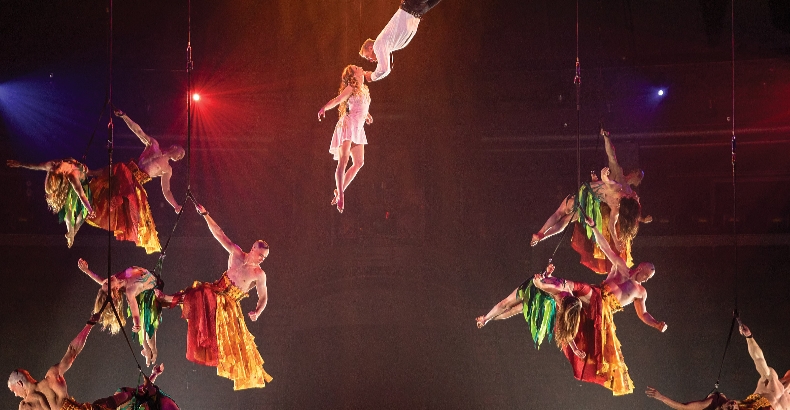 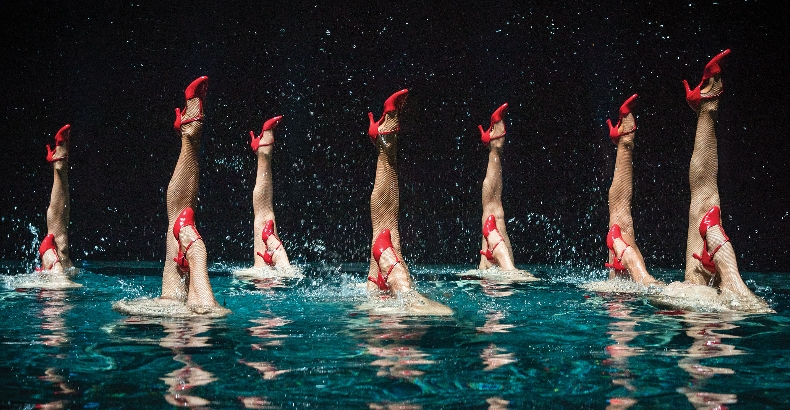 Reimagined?  What does that even mean, for Wynn Las Vegas’ Le Rêve – The Dream, a show that over the past dozen years has been revamped, redone, and revised, already; to the point that the current production bears only a slight resemblance to the original?  I guess it means what you think it means; only this time, everything clicked; and it totally works!

The aquatic theater-in-the-round (built at a cost of $75 million) has morphed from dark blues to opulent ambers; and there’s even a row of “Dream Seating” that not only has more leg-room, but also features private HD video monitors allowing the guest to view live-feeds from backstage (which, in the case of the Wynn Theater, doesn’t just mean in the wings, but also under the water at depths up to 26-feet, as well as above the stage at roughly 100’ in the air), as well as from multiple perspectives around the theater.  Bonus: There are wooden tables between each seat, in this category; eliminating the need to ever have to feel around in the darkness, for your drink, popcorn, program, fan, camera, purse, or what-have-you,

Even the central character – originally cast as a male, The Dreamer is now a female role – has changed.  Le Rêve is a love story; just one whose gaze has been adjusted.  Perhaps the most significant change, though, has been to the choreography.  Where once heavy use of aerial acrobatics (requiring one’s eyes to travel up-and-down-and-up-and-down, etc.), were de rigueur; now there’s more dancing, along the lateral plane.  And what dancing!  There’s a tango number that’s just dreamy (pun intended), a pasodoble that evokes a Spanish bullfight, and a number of numbers that make full use of the aqua-stage; with sloshing and splashing adding to the effect.

Tony-winning lighting designers Jules Fisher and Peggy Eisenhauer were brought-in and the lighting story is utterly fantastic.  In some cases, the actual lights (some with their own aerial choreography) have become characters in the show. All of which is why Le Rêve easily ranks among the best lit shows I’ve ever seen, anywhere; with incredibly well-conceived saturations of color that ably aide the narrative.

And speaking of non-verbally communications, award-winning wardrobe designer, Suzy Benzinger (Blue Jasmine) has whipped up a veritable bounty of vestments that transmit everything from naivety and coyness to impishness and grandiosity.  Get this - Le Rêve’s costumes have a lifespan of two weeks, before requiring replacement; while holes have been drilled through every pair of shoes, to allow for drainage.  And while I’m gonna mention that the make-up is waterproof; I’m sure you’d already figured that out, for yourself.

Throughout the show, rival suitors True Love and Dark Passion vie for The Dreamer’s heart; and of course True Love wins out, in the end.  I wonder, though; given the option, which would you choose? (I wish I could say that for me, it’d be Dark Passion; but I’m a sap, and will go with True Love, every time).