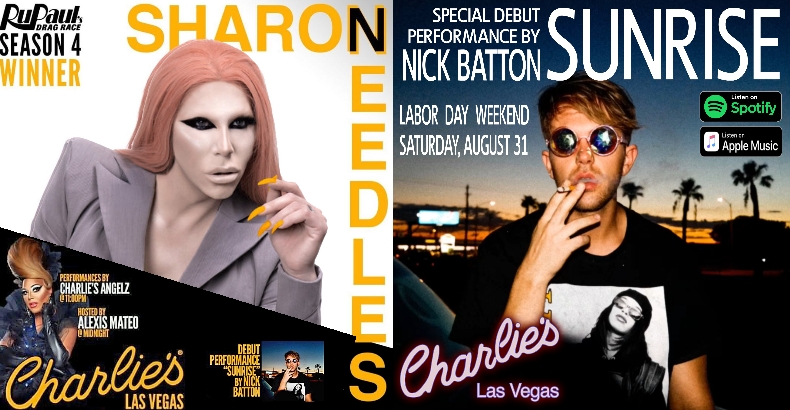 It’s gonna be a full house, this Saturday, when – as part of its Labor Day Weekend festivities – Charlie’s Las Vegas is offering a slate of entertainment featuring the country-western-themed gay bar’s resident drag ensemble, the Charlie’s Angelz, the Bam-tasticly delightful resident Alexis Mateo (who will be serving it up as hostess); emerging Las Vegas singer-songwriter Nick Batton (in the first live performance of his debut single, “Sunrise”), and the spooktacularly sinful Sharon Needles as the headliner.

The club’s in-house drag troupe, the Charlie’s Angelz – including Sage O’Hara-Andrews, Mirage Amuro, Sunshine, and Polly Porcelain – will kick-off the evening with a preshow performance at 11pm.

At midnight, resident Alexis Mateo (Finalist – RuPaul’s Drag Race, Season 3) takes to the stage for the main show, where she will both emcee the evening’s festivities and perform a number or two, herself.  A showgirl at heart, with dozens of pageant titles to her name, Mateo (who management proudly claims as a “member of the Charlie’s family”) is sure to regale the house with many utterings of her signature “Bam!”

Next on the bill, another member of the Charlie’s family, Las Vegas’ own Nick Batton, an up-and-coming singer/songwriter (who can be found tending bar at Charlie’s Las Vegas on most nights), will be treating the audience to the first live performance of his debut single, “Sunrise” – an ambient electro-pop ballad about loves lost, that is at once darkly poignant, lushly orchestral, and achingly beautiful; and is currently available for download on both Spotify and Apple Music.

The headlining spot, of course, belongs to the ghoulishly glam Sharon Needles (Winner – RuPaul’s Drag Race, Season 4), who might lip sync; might perform one of her original songs, from her albums PG-13 (2013), Taxidermy (2015), or Battle Axe (2017); or might do something completely outside of the box (insomuch as Needles can be boxed into anything).

The main show’s second set will feature more performances from Mateo and Needles.

Excited about their entire Labor Day Weekend line-up, the management of Charlie’s Las Vegas tells me that they are really psyched about this event in particular.  “This is going to be a special evening.  We’ve had Sharon once before, and after receiving such incredible feedback from our customers, knew we had to bring her back!  And Nick, one of our bartenders, will be making his debut live performance, opening for Sharon, with his first single, “Sunrise” – a song he wrote and recently released on Spotify and Apple Music.  We are so proud to be providing this platform to support an artist from within our Charlie’s family.”

VIP Tables are being sold for this event and each includes seating for four (4) at the front of the stage, a priority meet-and-greet with a signed poster, a complimentary round of cocktails, and a bottle of Champagne.  Tables can be purchased by clicking HERE.

As far as attire, Charlie’s has advised that they know you want to look your best for any special event, because in Las Vegas, you never know who you’re going to meet; with the added codicil that as a country-western bar, everyone is always encouraged dressed to do the boot-scootin’ boogie, though if more conventional attire is your thing, that’s cool as well, so long as you’re comfortable.

So, pull on your boots, fasten your spurs, grab your favorite Stetson, and mosey on into Charlie’s Las Vegas, this Saturday night.  But please, leave your six-shooters at home.