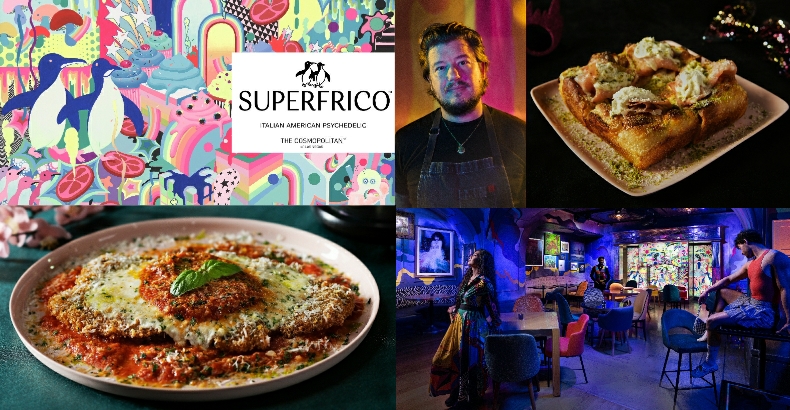 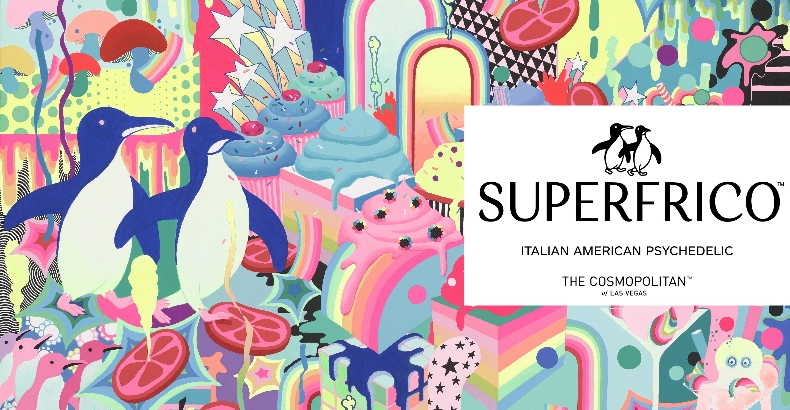 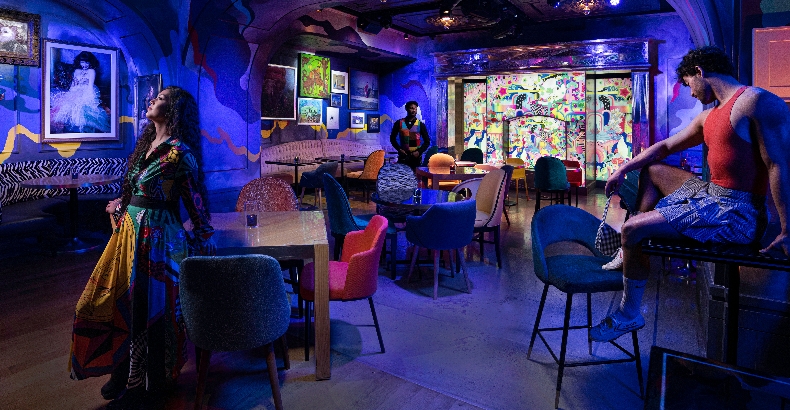 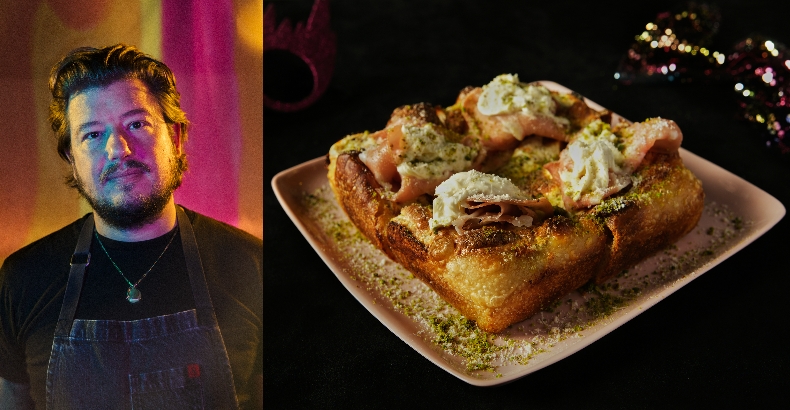 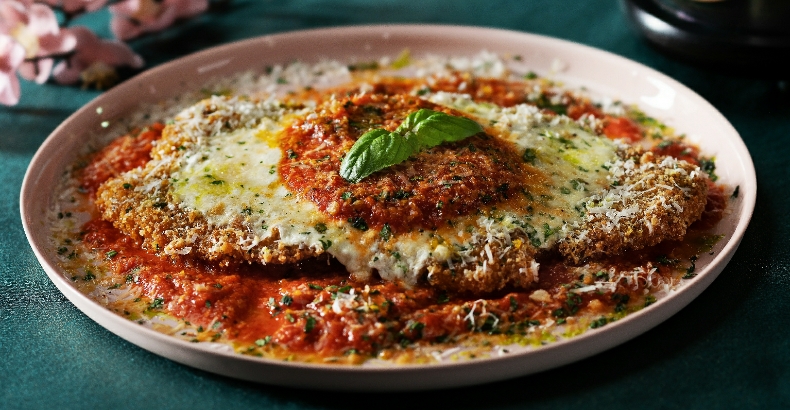 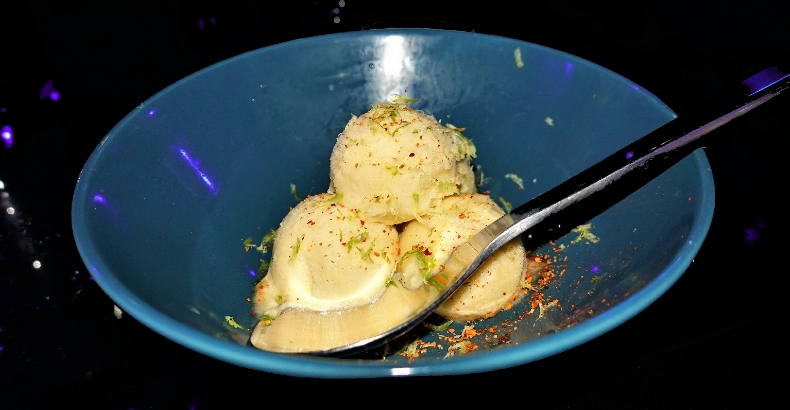 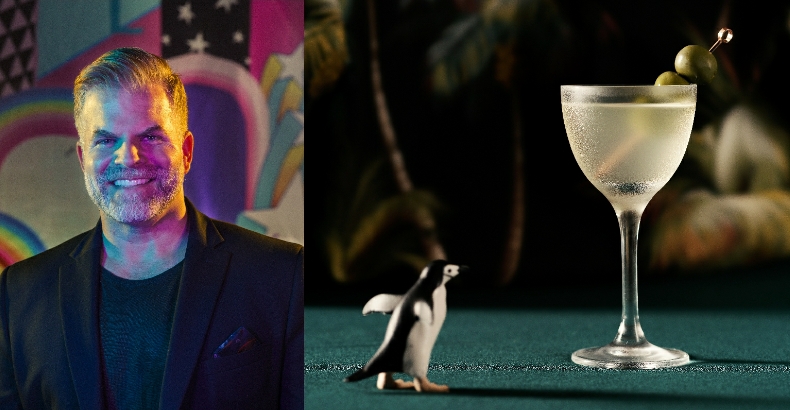 “Italian American Psychedelic.”  This was how Superfrico at The Cosmopolitan of Las Vegas—the first fully-integrated dining and cocktail concept from Spiegelworld (the zany folks behind Absinthe, Atomic Saloon Show, and OPIUM)—was described both in its press materials and in its own logo.  Admittedly, my mind went right to food made with hallucinogenic mushrooms; though I was certain this couldn’t be the case as the Gaming Control Board would no doubt frown on such a thing.

Then, while dining with friends at the preview dinner, Chef Anthony Falco came by our table, and introduced himself.  Falco—his website describes him as a ‘Global Pizza Consultant’—convivially explained how he created the menu for Superfrico using his grandmother’s Sicilian recipes as a starting point, then introduced flavors from such far-flung locales as North Africa and India into the mix.  The result is at once refreshing, zesty, and unique.

For instance, the Lamb Ragù Babbaluci is made with lamb sausage, tomato, mint, parsley, lemon labneh, and za’atar. *  I can’t recall ever having tasted mint in a pasta dish, before; and once I got my head around it, found it enchanting.  Likewise, the Calamari is prepared with grilled scallions, yuzu koshō, tangerine honey, Aleppo pepper, and basil oil was a festival of flavors, highlighted to great effect by the yuzu koshō (the fermented chili paste made with yuzu peel that hails from the Japanese island of Kyushu), and the Aleppo peppers (from Syria and Turkey).

The pizzas are gonna be a headline of anyone’s Superfrico story and some will be tempted to go, just for the ‘za.  We tried two of the Square Pizzas, the Ultimate Pepperoni (topped with tomato, house mozzarella, ‘nduja. Sicilian oregano, and Ezzo pepperoni) and the Pistachio Mortadella (topped with pistachio pesto, house mozzarella, mortadella, house Stracciatella, parmigiano-reggiano, and pistachios).  I could describe the flavors, but feel you’d be better informed by knowing that a mock duel ensued at our table over the final piece of each pizza, as there were three of us and four pieces to each pie.

Mary’s Free Range Chicken produces some of the finest tasting, most succulent birds anywhere; so I was pleased to learn that Mary’s chickens are used to make Superfrico’s Chicken Parm (with spicy marinara, house mozzarella, Parmigiano-Reggiano, basil oil, parsley, lemon zest, and sourdough breadcrumbs).  Meanwhile, this wasn’t your Nonna’s chicken parm, but rather was something zestier, with a higher chicken-to-breading ratio than the chicken parms I tend to eat.  To wit, one of my friends and I disagreed over whether or not it wasn’t pounded enough (his was the nay to my yay); but to my mind, the slightly plumper breast served to elevate the dish.

Under normal circumstances, I’d have likely been too full to enjoy more than a bite of dessert; but there’s nothing normal about Superfrico.  When the Roasted Pineapple Sorbetto (with lime zest, vanilla, and a Tajin rim) made its way to our table, I thought “Oh.  Sorbet.  Okay.”  Then, I tasted it.  Yowza!  I guess I need more Tajin in my life because this wasn’t your basic bowl of sorbet, but rather something exotic and light and lively.  I spoke to Executive Chef Mitch Emge about the choice of desserts, and he explained that with many of Superfrico’s diners coming for a dinner-and-a-show experience—in addition to the immersive theatrics that pop up throughout the evening, OPIUM is not so much next-door as it is on the other side of a retractable wall—they figured that they wouldn’t be doing anybody any favors to serve rich, heavy desserts when they were going to be sitting through a show, afterward.  I don’t care what the rationale was behind it, so long as I can get some more of that sweet, sweet nectar of the gods in my mouth and belly.

Superfrico’s ambiance is visually enhanced by a collection of art cleverly curated by Heather Harmon; my favorites being Adehla Lee’s “Psycho Pop Party” and the portrait of Mr. Piffles (the cute costumed canine companion of Piff the Magic Dragon; who, with Piff, was originally brought to Las Vegas by Spiegelworld, back in 2014).

And while the mixology program curated by Leo Robitschek is tantalizing, to say the least, I wasn’t partaking, that night.  Next time, however, I’m definitely making a point to enjoy a bit of après in The Ski Lodge, Superfrico’s ersatz after-ski fireside cocktail bar with a ‘picture window’ looking out over some of the world’s premier skiing destinations.  It’s like Gstaad on the Strip!

Superfrico
The Cosmopolitan of Las Vegas
Click HERE for info

Get into it!
#Superfrico

[Editor’s Note: * A spice mixture from the Middle East that most often contains some combination of marjoram, dried oregano, thyme, toasted sesame seeds, and sumac; Za’atar is thought by biblical scholars to be the ‘hyssop’ referred to in both the Old and New Testaments]