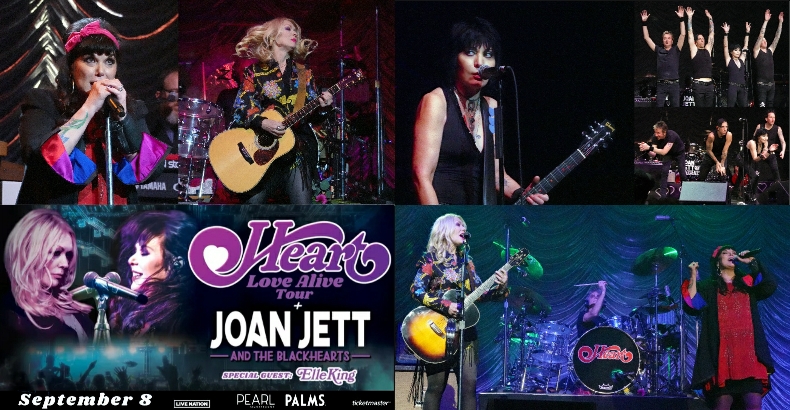 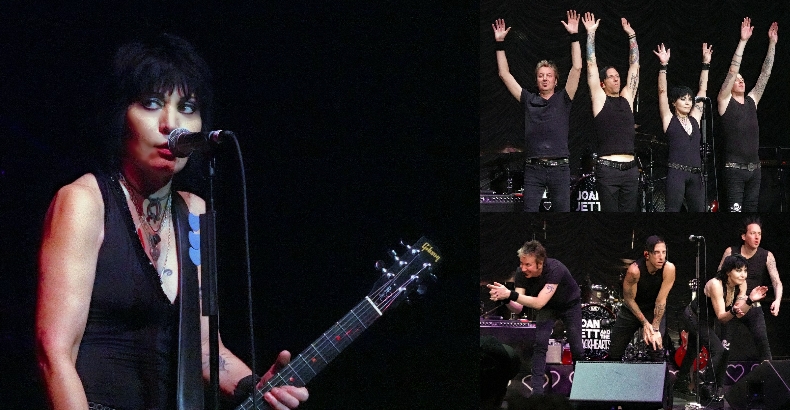 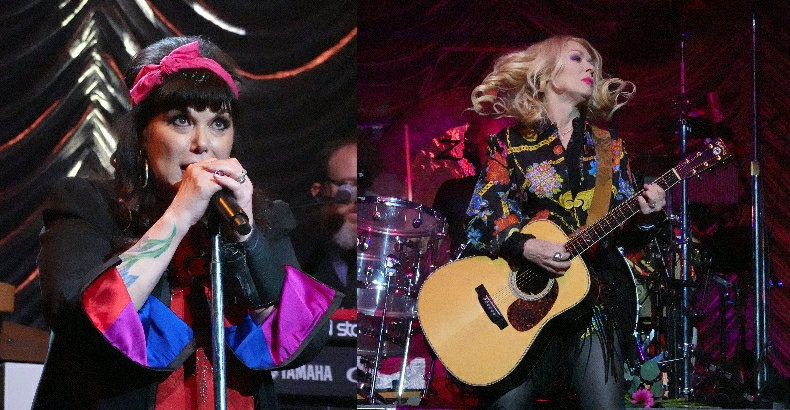 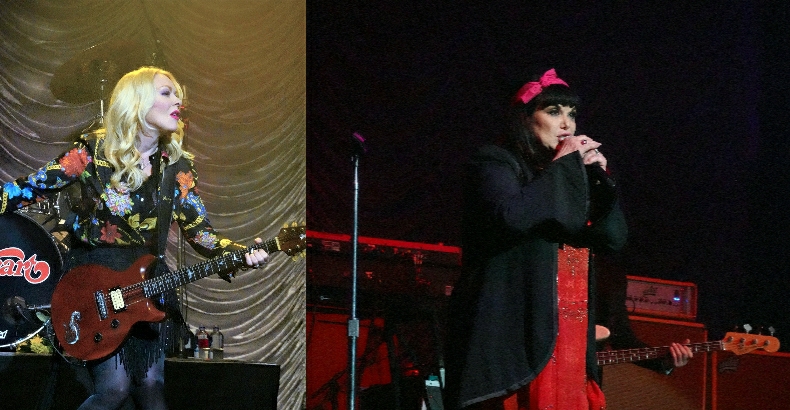 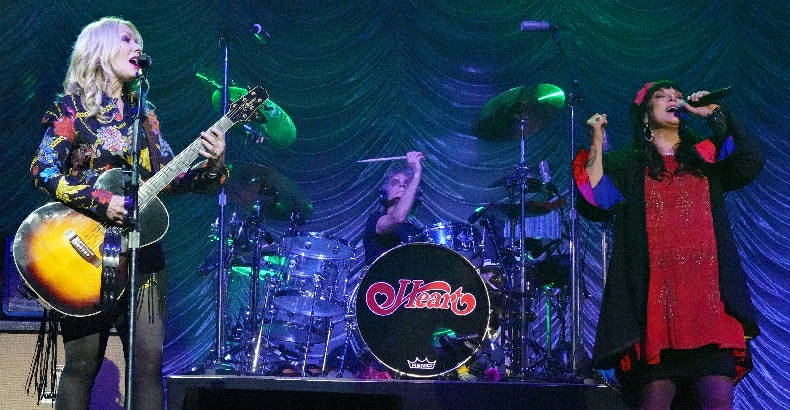 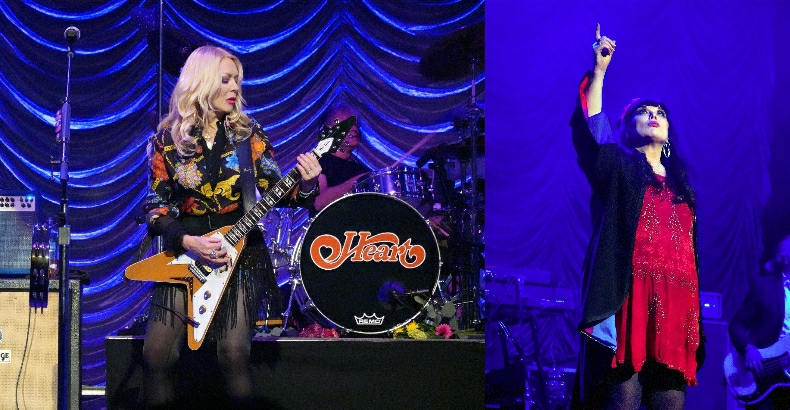 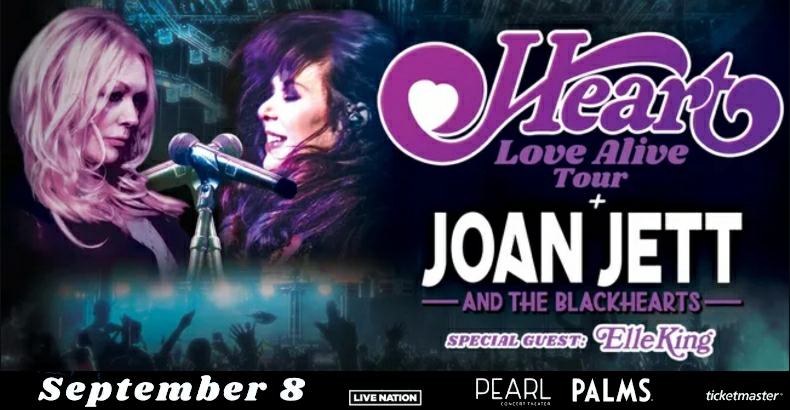 When it was announced that Heart was bringing their Live Nation-presented Love Alive Tour to the Pearl Concert Theater at Palms Resort Casino, with Joan Jett & the Blackhearts, and special guest Elle King, it sold out so quickly that I wasn’t able to acquire a ticket through my usual channels; and while I am happy to report that I did end-up in a sensational seat in the fourth row, I wasn’t confirmed until the afternoon of the concert.

Not only was the evening well worth all of the last-minute scrambling; but it capped a summer of concerts in Las Vegas featuring some of the greatest female-led acts from the Rock Era, including Blondie (also at Palms), as well as Pat Benatar & Neil Giraldo and Melissa Etheridge (both at Wynn Las Vegas).  Suffice it to say that the sounds of my summer were utterly drenched in estrogen, and that was fine by me.

The evening began with a set by Elle King.  The daughter of comedian and SNL-alum Rob Schneider, King is perhaps best known for her hit “Exes and Ohs;” and while I’m sure she was fierce, I can’t know for sure, as I’d opted to have dinner with my dad instead of attending three back-to-back-to-back performances.  Thus, I arrived in time for Jett’s set, which did not disappoint.

Jett – a founding member of the late-‘70s proto all-female teenage rock band, the Runaways who has at various times been dubbed the 'Godmother of Punk,' the 'Original Riot Grrrl,' and the 'Queen of Rock n’ Roll' - was ranked one of the “100 Greatest Guitarists of All Time” by Rolling Stone; and with her band the Blackhearts, was inducted into the Rock & Roll Hall of Fame in 2015.

A riotous 16-song set included such Jett-penned hits as “Cherry Bomb” and “You Drive Me Wild” (the Runaways), “Bad Reputation” (Jett’s debut single as a solo artist), and “I Hate Myself for Loving You” (Joan Jett & the Blackhearts); as well as Jett’s much-beloved covers of songs like “Do You Wanna Touch Me (Oh Yeah)” (Gary Glitter),  “Crimson and Clover” (Tommy James & the Shondells), “Light of Day” (Bruce Springsteen), “Everyday People” (Sly & the Family Stone), and perhaps the cover most associated with Jett, “I Love Rock n’ Roll” (the Arrows).  And as I might have predicted, the band’s cover of Sonny Curtis’ “Love is All Around” (aka the theme to The Mary Tyler Moore Show) was made all the more poignant, due to the recent passing of Valerie Harper.

After a brief intermission, it was time for Heart; and the audience got right into the blistering guitar riffs and soaring vocals for which the Wilson sisters and their band are known.  The 16-song set was a sonically sublime mélange of hits from the band’s 45-year history, as well as covers of songs that influenced their music.   And what music!  It’s no mystery why Heart, inducted into the Rock & Roll Hall of Fame in 2013, was ranked by VH1 as one of the “100 Greatest Artists of Hard Rock,” with sisters Ann and Nancy Wilson also sharing a spot on VH1’s list of the “100 Greatest Women in Rock and Roll.”

The band’s mid-80s renaissance (coinciding with Heart’s move to Capitol Records) was neatly wrapped-up with the triple-bow of “These Dreams” and “What About Love” (from 1985’s Heart); and “Alone” (from 1987’s Bad Animals); * while the remaining four songs (covers all) included “Your Move” (Yes), “I Heard It Through the Grapevine” (Marvin Gaye), and “The Boxer” (Simon & Garfunkel), as well as the Wilson sisters’ definitive cover of Led Zeppelin’s “Stairway to Heaven.” **

If I had to pick my favorite moment from the night, it would be the performance of “Crazy on You” punctuated in rocking fashion by Nancy Wilson’s high kick at the beginning. Fortunately, you can see it for yourself, in the video.  Meanwhile, as happens following concerts like this; it wasn’t until I had emerged from the Pearl, and was waiting in Valet for my car, that my ears stopped ringing.

[Editor’s Notes: “What About Love” and “Alone” are themselves covers, by Toronto and I-Ten, respectively // The YouTube video of Ann and Nancy Wilson’s live performance of “Stairway to Heaven” at the 2012 Kennedy Center Honors – with Jason Bonham on drums, an orchestra, and two choirs – went viral, racking up more than 4 million hits in its first five days.]