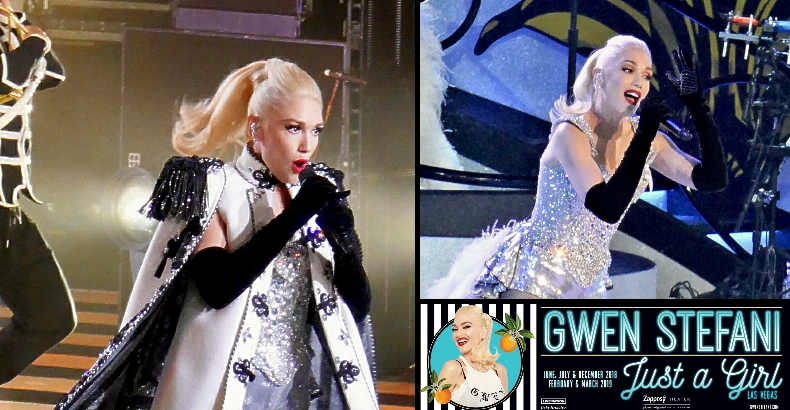 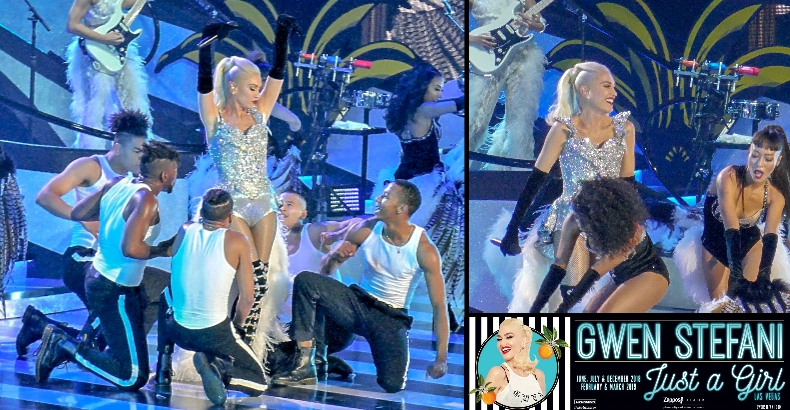 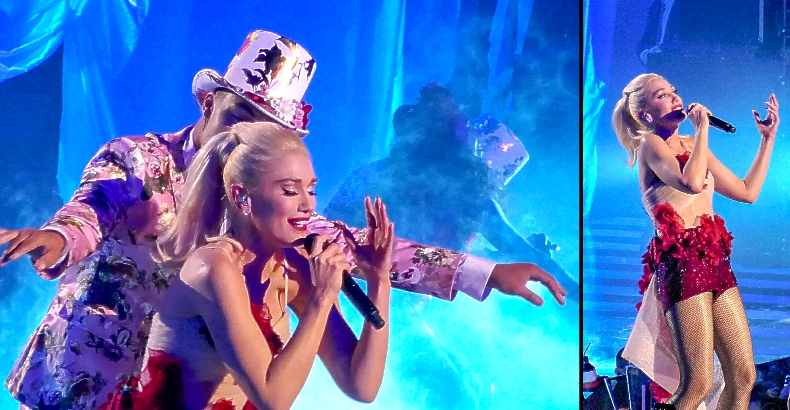 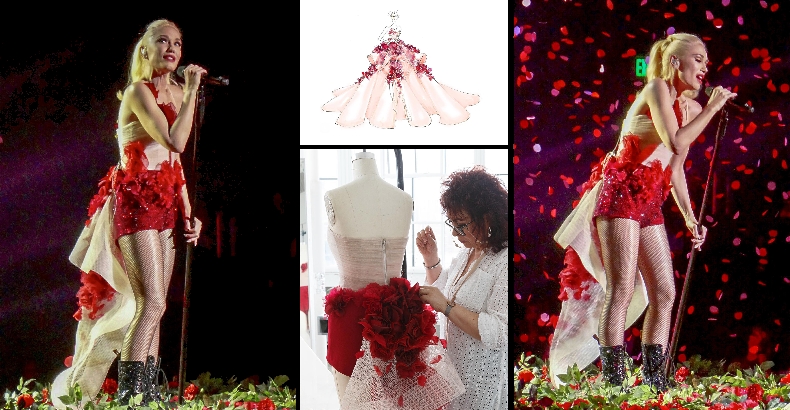 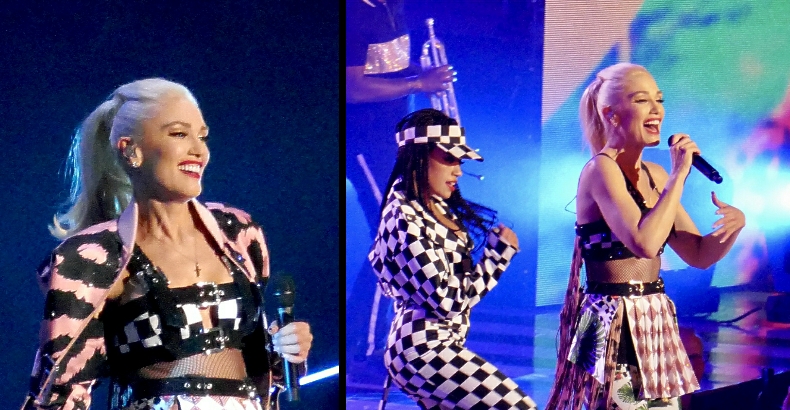 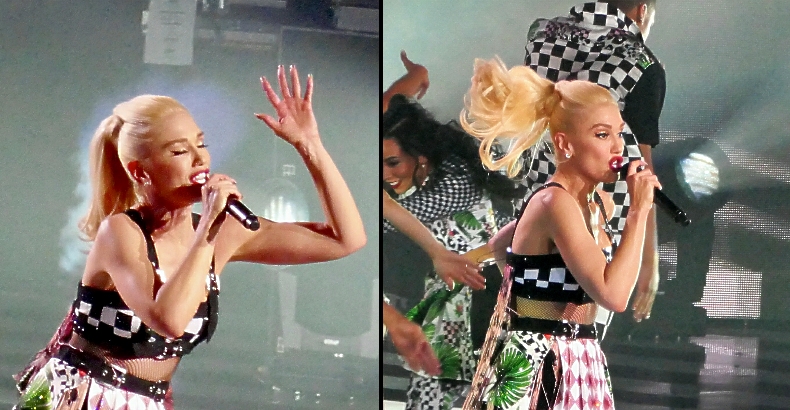 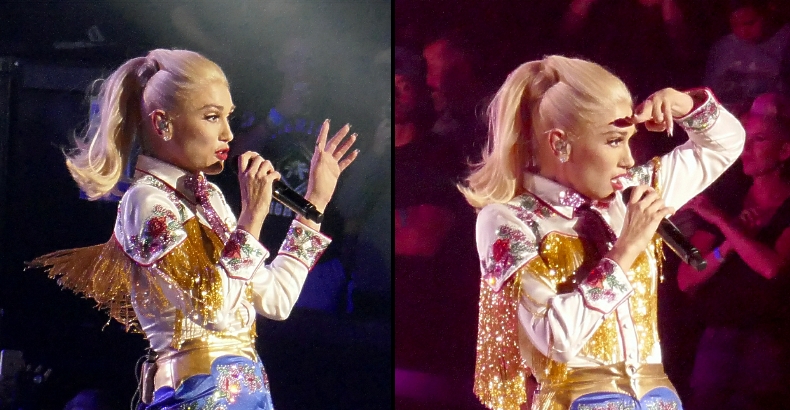 On Wednesday, June 30, 2018, at about 9pm, following a bit of introductory fanfare provided by a showgirl-line cum marching-band (all holding enormous banana-props, mind you), Gwen Stefani alighted from an enormous four-story set that—at that moment—was presented as a grand Deco staircase, worthy of Gatsby; in the Zappos Theater, at Planet Hollywood.  Her hair having been styled by Danilo, into a sleek knotted “flying” ponytail, she was decked out in a custom look, created by The Blonds (that had been dubbed “Major Diamond Showgirl” by David Blond), Stefani was there to show the world that she was more than ready to headline her own residency show, on the Las Vegas Strip.  And from the very first moment of Just a Girl, she let everyone know that it was gonna be B-A-N-A-N-A-S.

After shedding her cape at the end of “Hollaback Girl,” having a showgirl moment during “Bathwater,” and going agro for “Baby, Don’t Lie;” Act 1 concluded with a heartfelt rendition of No Doubt’s 2003 cover of Talk Talk’s 1984 New Wave classic, “It’s My Life.”

“Spiderwebs” kicked-off Act 2. and brought with it the evening’s first wardrobe-change, into a custom Versace number with pink leopard fringe, perfectly accentuating the high-energy ska artist’s kinetic energy.  “Sunday Morning” was next, followed by “Underneath It All” that she cleverly segued into a cover of Blondie’s classic 1980 reggae version of The Paragons’ 1966 rocksteady standard, “The Tide is High.”  Following this, she did another double-double, combining “Ex-Girlfriend” with “Hella Good,” before the lights came down.

The Harajuku Girls got Act 3 started with their namesake song, before an enormous, multi-tiered cake was turned-around, to reveal Stefani, in another custom look by The Blonds (“Latex Flower Power,” per David Blond), sitting in an oversized chair — out of which she popped to sing the interpolation of The Sound of Music’s “The Lonely Goatherd” that marked the beginning of “Wind It Up.”  Up next was Stefani’s hit “Rich Girl” (with the Harajuku Girls filling-in for Eve), followed by “Cool” and “Luxurious;” before she broke into a rousing cover of Rihanna’s “Umbrella” (-ella, -ella; eh, eh, eh), and finished-out this act with her first single as a solo artist, “What You Waiting For?” during which, the set transformed into an Alice in Wonderland-inspired house of cards.

Act 4 (the last, before the Encore) found Stefani in Marchesa’s custom modular “Rose Petal” look; worn as a gown, for “Simple Kind of Life.”  After which, during the singing of “Used to Love You” and “Misery” — both of which were co-written by the powerhouse songwriting team of Julia Michaels and Justin Tranter (the latter of whom was there, with his parents, and a few friends) — the skirts were removed from the gown, revealing a cocktail-romper with a cascading fall.  Then, for the first finale, “Don’t Speak” (No Doubt’s biggest international hit, not to mention 1996’s most widely-played song on American radio), the cloak was placed over Stefani’s shoulders, and she walked to a pedestal covered in rose-vines, from which she sang and took her bows, to thunderous applause, as the pedestal rose into the air and came back down again.

The Encore got underway with infectious “Make Me Like You” (another collab with Michaels and Tranter, from 2016’s This Is What the Truth Feels Like), with Gwen clad in a custom Moschino look (perhaps best described as Jeremy Scott’s version of Dale Evans-realness, as imagined for the Vegas stage).  Next on the hit parade, came No Doubt’s dancehall stomper “Hey Baby,” followed by the song that started it all (as far as Stefani’s domination of song, screen, style, etc. was concerned), acted as a portal through which No Doubt stepped into the pop-culture lexicon, and provided the name for the residency, the punk-ska anthem “Just a Girl” – the video for which likely inspired the biggest Stateside uptick in sales the Bindi-industry has ever seen.  The song gave the audience reason to bestow its longest and loudest applause of the night, upon Stefani.  I could be mistaken, but as I turned and scanned the audience, anyone who wasn’t dancing or jumping up-and-down, at this point, was standing and nodding and singing along.  As a final finale, if you will, Stefani closed the evening – after nearly two hours, mind you – with the familiar doo-woppy “Woo-hoo, Yee-hoo” of Stefani’s confectionary ska single, “The Sweet Escape,” and it was an absolutely delicious way to close a show that's a whole lotta fun.

And as a special thank you to the City of Las Vegas, it was announced that Stefani—in partnership with Live Nation Las Vegas, and Caesars Entertainment—is donating $1 from the purchase of each ticket for Gwen Stefani – Just a Girl, to the Cure 4 the Kids Foundation; a terrific organization that provides medical aid to children in Nevada and surrounding communities, with life-threatening diseases.

[Editor’s Note: With the exception of the three covers she performed — Talk Talk’s “It’s My Life, ”Rihanna’s “Umbrella,” and The Paragons’ “The Tide is High” — Gwen Stefani wrote or co-wrote every song performed in Gwen Stefani – Just a Girl //  It should be noted that, as per Las Vegas convention, when Gwen Stefani – Just a Girl returns for the residency’s second leg (December 27th – 31st), it's likely that between two and five songs will either have been cut from the set-list, or condensed into medleys with other songs; trimming the show down-to a more streamlined 80 or 90 minute entertainment spectacle.]